Lewis "Scooter" Libby is a felon

The criminal conviction of one of the Bush administration's most powerful figures is a victory for the rule of law, and a warning that no official is invulnerable. 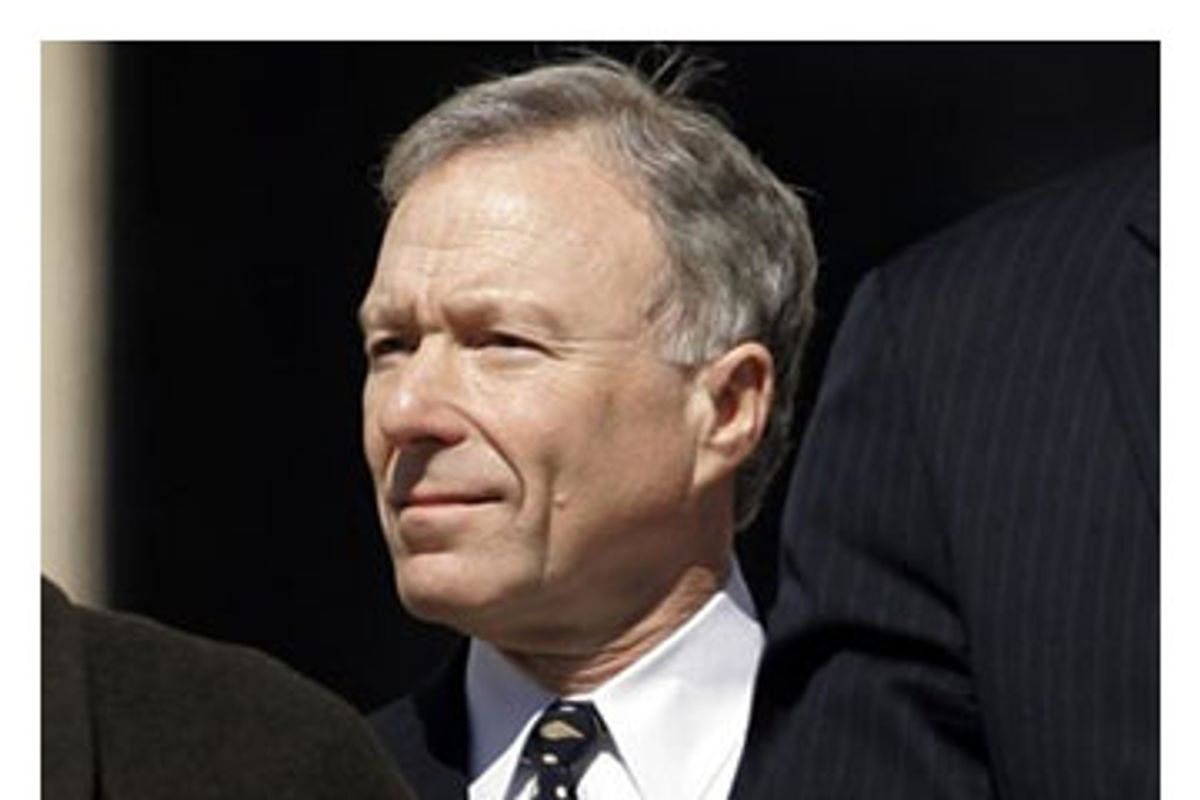 A unanimous federal jury today found former Cheney Chief of Staff Lewis "Scooter" Libby guilty of four of the five felonies for which he was indicted. Libby was convicted of two counts of perjury, one count of obstruction of justice and one false statement, all of which arise out of the lies he told to the FBI and grand jury as it investigated the "outing" of CIA operative Valerie Plame. What had appeared for several years to be a powerful shield possessed by top Bush officials against being held accountable under the law looks much less powerful today. Dick Cheney's most trusted advisor is now a convicted felon.

The implications of this trial are likely to be far-reaching and long-lasting. There were few officials with greater influence or power during the first four years of the Bush administration than Libby. He was not only the vice president's chief of staff, but also assistant to the president himself in national security matters. But Libby's importance in the Bush administration is reflected by far more than his formal titles.

He has long been one of the most well-connected neoconservatives in the country. Along with Cheney, Donald Rumsfeld, Paul Wolfowitz, Jeb Bush and Norman Podhoretz, Libby was one of the 25 signatories to the founding statement of Bill Kristol's empire-embracing Project for a New American Century in 1997. PNAC called for an invasion of Iraq long before the 9/11 attack was seized on as the "justification" for that invasion. When it comes to the political movement that has dominated the American government for the last six years, Scooter Libby was at its very crux, a close intimate of America's most powerful political officials.

Today's event sends a potent and unmistakable message, one that is absolutely reverberating in the West Wing: If Libby can be convicted of multiple felonies, then any Bush official who has committed crimes can be as well. Not only are Bush officials subject to the rule of law (their radical theories of executive power to the contrary notwithstanding), they are also vulnerable to legal consequences (the defeatist beliefs of some Bush critics notwithstanding). Having the nation watch this powerful Bush official be declared a criminal -- despite having been defended by the best legal team money can buy -- resoundingly reaffirms the principle that our highest political officials can and must be held accountable when they break the law.

Some of the future events in the Libby case are easy to foresee, while others are more uncertain. Almost immediately after the verdict was announced, Libby's counsel, Theodore Wells, vowed that Libby would request a new trial and if that is unsuccessful (as it likely will be), he will appeal the conviction. Those are routine steps in a case of this magnitude. What is both less routine and less certain is the question of whether prosecutor Patrick Fitzgerald is planning to leverage this conviction in order to secure additional indictments against other possible defendants, possibly the vice president himself. Fitzgerald stressed after the verdict that he had "no expectations" of further indictments, but he left open that possibility in the event that new information came to light that warranted further proceedings.

The Bush administration has no good options for how to respond to this conviction politically. The seriousness of the charges is manifest. Libby was accused, and now found guilty of, obstructing justice in connection with an FBI investigation into the disclosure of a covert CIA operative. Unlike, say, defenders of Bill Clinton during his perjury impeachment trial in the Senate, the administration cannot plausibly make the claim -- though its proxies in the conservative blogosphere continue to do so -- that the underlying investigation that Libby obstructed was not serious. And the endless parade of emphatic speeches delivered by top Republicans about the Seriousness of Perjury during the Clinton impeachment proceedings somewhat hamstrings the ability of Republicans to be dismissive of the importance of these crimes.

Nor are potential Libby defenders able to depict Fitzgerald as some sort of partisan, out-of-control Ken Starr figure. Fitzgerald was appointed as special counsel by the Bush Justice Department, and has no Starr-like history of partisan affiliations one way or the other. By refusing to indict Karl Rove and other Bush officials who were almost certainly indictable -- a decision that disappointed most Bush critics following this case -- Fitzgerald has revealed himself to be a model of prosecutorial restraint. He is also now a vindicated prosecutor.

While Libby associates will undoubtedly unleash all sorts of smears on Fitzgerald in order to discredit the conviction, there are simply no effective weapons against what ought to be the serious political damage resulting from this trial. Whatever one wants to say about Fitzgerald, the jury, after lengthy deliberations, has spoken.

It is worth noting, perhaps most important, that there is a whole array of other pending judicial matters that, either directly or implicitly, entail accusations against high Bush officials, including the president himself, of engaging in serious criminal behavior. Last August, a federal district judge, Anna Diggs Taylor, ruled that President Bush's warrantless eavesdropping program violated not only the Constitution but also FISA, a criminal statute making it a federal felony to eavesdrop on Americans without judicial warrants and imposing punishments of five years' imprisonment for each offense and fines up to $10,000.

Also last fall, the U.S. Supreme Court in the Hamdan case rejected the Bush administration's principal defense for its violations of the Geneva Conventions not only with regard to military commissions, but also generally. By holding that Common Article 3 of the Conventions applies to all detainees, and by emphasizing that a failure to treat detainees in compliance with Common Article 3 constitutes "war crimes," the Supreme Court effectively found that Bush officials have authorized and engaged in what clearly could be construed to be felony violations of the War Crimes Act (18 U.S.C. sec. 2241), which makes it a federal crime to violate war treaties such as the Geneva Conventions. Though the administration succeeded in inducing the Republican-led Congress to enact the Military Commissions Act as a shield against retroactive criminal liability, the constitutionality of that law, and the efficacy of the criminal shield provisions, are far from certain.

Beyond these known areas of potential criminal liability, the control of Congress that Democrats have now been given enables them to conduct probing investigations in order to finally penetrate the unprecedented wall of secrecy behind which the Bush administration has operated. Meaningful investigations will almost certainly generate additional sources of potential criminality on the part of this government.

There have been times in American history when it appeared as though certain political leaders were too powerful to be held legally accountable for their actions. Yet the rule of law in this country -- as slow, imperfect and endangered as it sometimes may be -- typically prevails over a particular elected official or political movement. Richard Nixon was reelected in 1972 with the largest landslide in American history, but he spent the next two years watching as his closest aides were hauled off to criminal proceedings and convicted, and in 1974, Nixon himself was forced from office, dependent upon Gerald Ford's pardon in order to avoid being imprisoned himself.

This administration has concocted all sorts of radical theories to justify its transgressions and outright violations of the law. It began that behavior at a time when it appeared that it was invulnerable and too politically powerful to be held accountable. After today's conviction of one of its own, it most assuredly sees things differently.