While Cheney's former aide prays for a presidential pardon, Bush and Rove hold forth in their neocon salon, and the coverup continues. 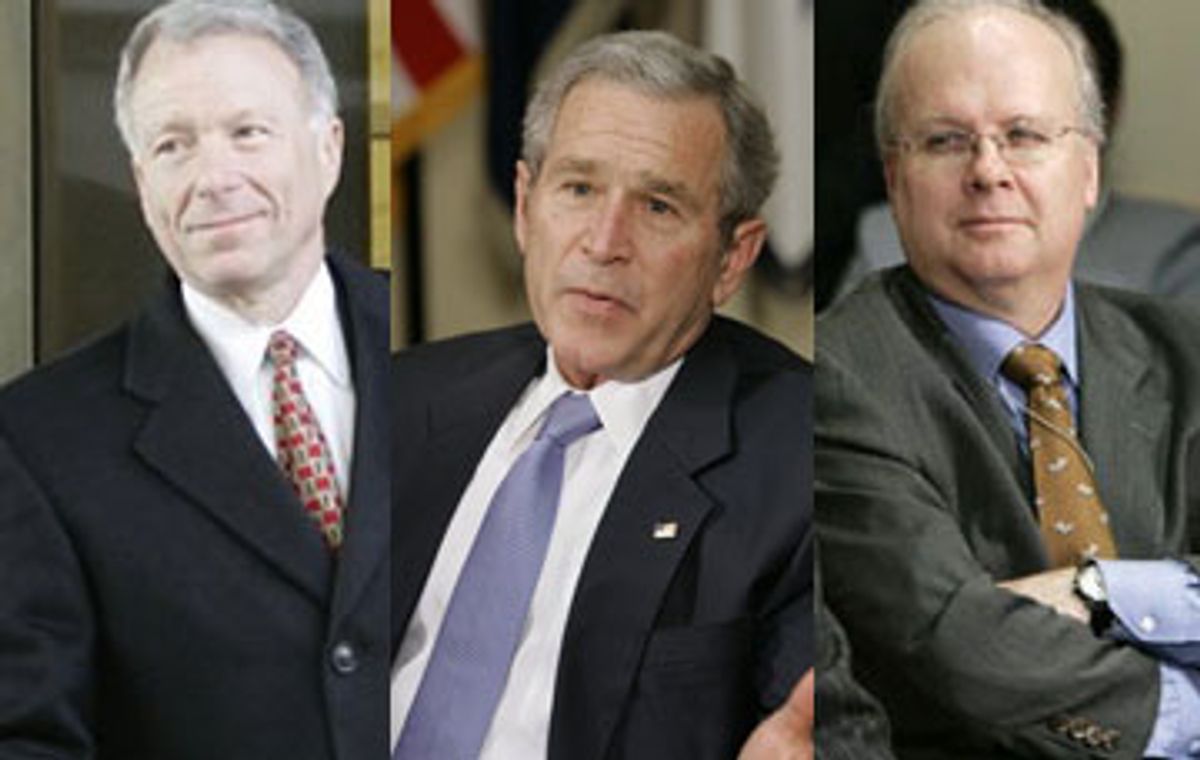 As witnesses were trooping to the stand in the federal courthouse in Washington to testify in the case of United States v. I. Lewis Libby, and the Washington Post was publishing its series on the squalid conditions that wounded Iraq war veterans suffer at the Walter Reed Army Medical Center while thousands more soldiers were surging into Baghdad, President Bush held one of his private book club sessions that Karl Rove organizes for him at the White House. Rove picks the book, invites the author and a few neoconservative intellectual luminaries, and conducts the discussions. For this Bush book club meeting, the guest was Andrew Roberts, an English conservative historian and columnist and the author of "The Churchillians" and, most recently, "A History of the English-Speaking People Since 1900."

The subject of Winston Churchill inspired Bush's self-reflection. The president confided to Roberts that he believes he has an advantage over Churchill, a reliable source with access to the conversation told me. He has faith in God, Bush explained, but Churchill, an agnostic, did not. Because he believes in God, it is easier for him to make decisions and stick to them than it was for Churchill. Bush said he doesn't worry, or feel alone, or care if he is unpopular. He has God.

Even as Scooter Libby sat at the defendant's table silently wearing his fixed, forced smile, and Vice President Dick Cheney was revealed by witnesses as the conductor of the smear campaign against former ambassador Joseph Wilson, Bush and Rove felt free to hold forth in their salon, removed from anxiety. Rove had narrowly escaped the fate of Libby by changing his grand jury testimony just before he might have been indicted for perjury. Bush, who proclaimed that he would fire any leaker found in his administration, is apparently closer to Rove than ever. The night before the Libby verdict, the president had dinner at Rove's house, and Rove sent to the reporters shivering outside a doggie bag filled with sausage and quail wings.

"Where's Rove? Where's, you know, where are these other guys?" wondered a juror, Denis Collins, standing on the courthouse steps after the Libby verdict was delivered. Collins said that he and other jurors came to think of Libby as a "fall guy," someone who had certainly committed the crimes of which he was accused but who also was hardly acting on his own.

The opening statement of Libby's attorney seemed to augur a presentation of the "fall guy" scenario. "They're trying to set me up. They want me to be the sacrificial lamb," Theodore Wells said, recalling Libby's words to Cheney. "I will not be sacrificed so Karl Rove can be protected." Rove, after all, had disclosed the identity of Wilson's wife, covert CIA operative Valerie Plame, to two reporters, conservative columnist Robert Novak, who first put her name into print, and Matthew Cooper of Time magazine. Rove told MSNBC "Hardball" host Chris Matthews that Plame was "fair game." And he offered as his motive for attacking Wilson to another reporter: "He's a Democrat."

In a note entered as a trial exhibit, Cheney expressed his concern that his chief of staff was being thrown to the wolves while Rove was being protected. "Not going to protect one staffer and sacrifice the guy that was asked to stick his neck in the meat grinder," the note read. Despite the dramatic opening, Libby's defense made no reference to the note during the trial. In yet another mysterious lapse, although Libby's lawyers repeatedly gave every indication to Judge Reggie Walton that both Libby and Cheney would testify, neither did. In a perjury trial, if the defendant does not look the jury in the eye and say he did not lie or that he made an honest error, it's difficult to win. But Libby never appeared as a witness on his own behalf; Cheney was not called; and the defense rested on the thin reed of Libby's weak memory and the supposed impeached credibility of journalists. The feeble defense amounted to a verdict foretold.

But why was Libby virtually passive? If Libby knew he was going to offer the barest defense, why didn't he do as Rove did, amending his grand jury testimony to reflect the truth? Why didn't Libby do as former White House press secretary Ari Fleischer did, turning state's evidence and being granted immunity in exchange for his testimony? What stopped Libby from risking indictment? What prevented him from making more than a minimal defense that invited conviction?

Libby could not plead the Fifth Amendment against self-incrimination. Had he done so he would not have been able to continue in his position as Cheney's chief of staff; he would have been compelled to resign. But why didn't he testify? Why didn't he make the case of Rove's perfidy that his lawyer suggested?

Libby and Rove's falsehoods in front of the grand jury, in which they blamed reporters for telling them about Plame, were a cleverly contrived coverup. They did not believe that the prosecutor would be able to break through the curtain of the First Amendment or untangle the tale as told by journalists. Both Libby and Rove relied on the same alibi, hiding behind the press corps that they had manipulated for years and whose erratic habits they knew well. But prosecutor Patrick Fitzgerald was not about to be confounded by this device. He knew the law was on his side, and he received a judicial decision forcing the reporters to testify.

Just as Fitzgerald was about to indict Rove for perjury and obstruction of justice, Rove got a lucky break. A reporter for Time magazine, Viveca Novak, a colleague of Cooper's and privy to his conversation with Rove, became consumed with an overwhelming desire to be an important inside dopester, and she rushed to inform Rove's lawyer, Robert Luskin, about Cooper's information. Suddenly, Rove produced an e-mail from Cooper that he had not produced to the prosecutor for a year, refreshed his memory, altered his testimony, and was off the hook. (Novak did not tell her editors or Cooper of her freelancing, and she was forced to resign, in effect sacrificing her career to save Rove by the skin of his teeth.) Libby was left to take the fall alone.

What bearing might this have on Libby's weak defense? Why didn't Libby and Cheney testify? Observing the trial as it developed, Cheney may have decided Libby would lose and that his becoming a witness was beside the point. Ultimately, did Cheney's self-protective calculation trump loyalty to his loyalist?

Did something change in the defense after its opening statement about Rove (Libby "will not be sacrificed so Karl Rove can be protected") that led to its refusal to follow up during the trial? Did the prosecutor have new information that has not yet been made public about Libby and Cheney? If so, that evidence would have been irrelevant to the precise charges against Libby but might have come into play if Libby and Cheney testified. Their appearances might have made them vulnerable to additional perjury and obstruction charges if they were found to have lied on the stand. But who might have proved that?

The missing piece in the extensive evidence and testimony that detailed the administration's concerted attack on Wilson, orchestrated by Cheney, is the conversations among Libby, Cheney -- and Rove. Rove had made a deal with Fitzgerald. Rove changed his testimony, escaped prosecution and went back for a fifth time before the grand jury. Fitzgerald owned Rove.

Only if Libby and Cheney appeared could Fitzgerald cross-examine them about their discussions with Rove, which presumably Rove had already testified about before the grand jury. Rove was the hostile witness against Cheney whom the prosecution had waiting in the wings, the witness who was never called. If Libby had come to the stand in his own defense, and summoned Cheney as well, Fitzgerald might have been prompted to call Rove from the deep to impeach Libby's and Cheney's credibility and reveal new incriminating information about them. Instead, Libby remained silent, Cheney flew off to Afghanistan and Rove never appeared. Rove was the missing witness for the prosecution.

Now Libby's only hope is a presidential pardon. He has already offended Rove and perhaps by extension Bush. Libby cannot afford to offend Cheney. His pardon depends on Cheney's importuning of Bush. Thus Libby's final plea is to Cheney -- and his coverup continues. Back at the White House, Rove makes the next selection for the book club.