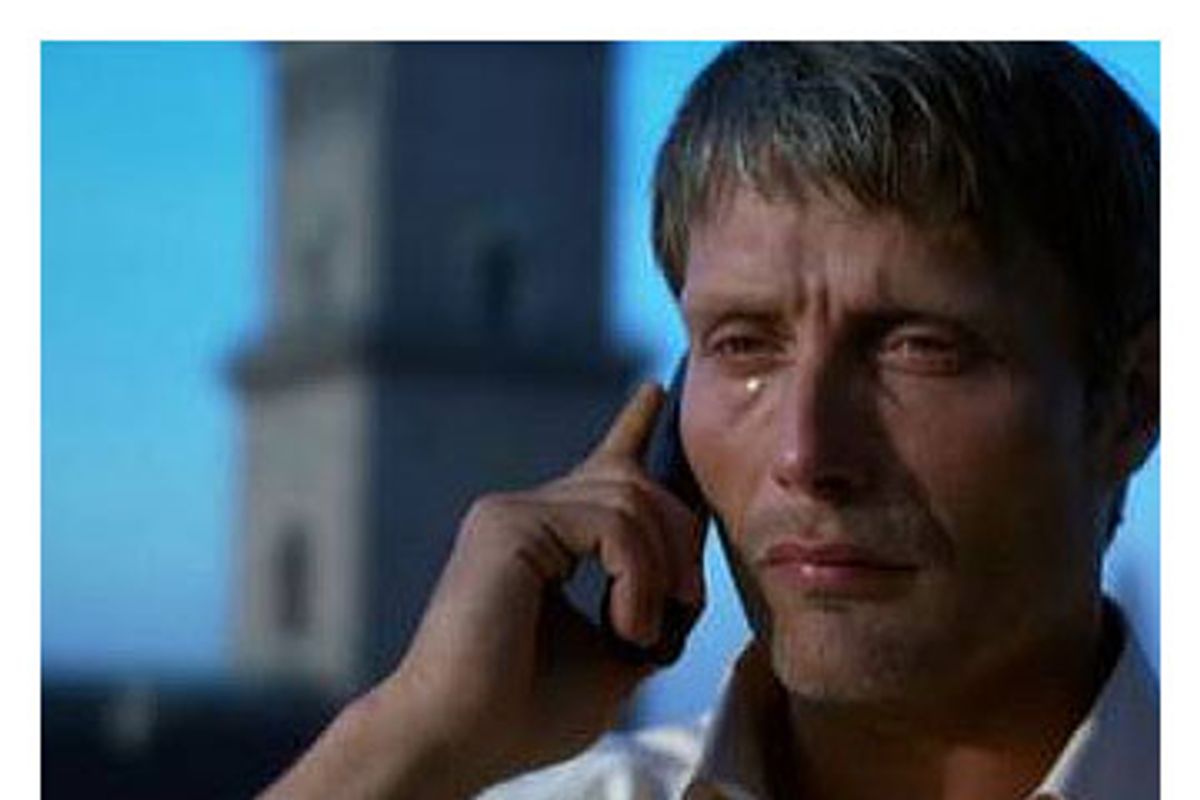 A few hours after I got here, I walked past some independent filmmaker (I have no idea who) doing a stand-up interview with a local TV crew outside a billiards hall on East Sixth Street, amid the young and well-scrubbed crowds of Austin's nightclub district. "You know, everybody tries to get into Sundance," he was saying into the blinding light. "But the whole time, we were kind of secretly hoping we'd get to come here. That's how it works."

That is in fact how it works. My unknown friend with the unknown film might have had a better short-term commercial future at Sundance (although that's far from a sure thing), but as far as festival quality-of-life issues go, he's in the right place. The South by Southwest Film Festival can't compare with Sundance as an acquisitions marketplace or a high-profile showcase for new movies. Even claiming that SXSW has the countercultural cachet that Sundance once possessed is misleading, because no single event or institution can wield that kind of cultural power in today's fragmented media environment. But it's a pile of fun, and whatever people say about Sundance, they don't say that.

Opening weekend at SXSW 2007 has been a cheerful and eclectic mixture of semimajor premieres and utterly unknown films, some of which may never play anywhere else. We've seen a crisp and engrossing thriller from writer-director Scott Frank, just a little too stark and dark to be a Hollywood film, on opening night. We've seen an awkward, immediately controversial film about (not by) Michael Moore, which struggles, with intermittent success, to yank the facade off the media superstar.

We've had a whimsical documentary about the world of balloon twisting, narrated by Jon Stewart, and I guess it doesn't get any more made-for-SXSW than that. (Except maybe for the inspirational documentary about the world of inner-city competitive jump-roping.) Protean Scottish actor-director Alan Cumming has premiered his new film, an outrageous horror-comedy carefully designed to offend the entire population of the planet. Then, on Sunday morning, there was church. Or at least there was filmmaker Robert Rodriguez and Ain't It Cool News founder Harry Jay Knowles leading a reverent lecture-demonstration about "grindhouse" cinema and, of course, about "Grindhouse," Rodriguez's new anthology feature made with Quentin Tarantino -- which was as close as most SXSW attendees got to religion this weekend.

As this festival crawls incrementally closer to mainstream significance (it's already an important venue for documentaries and horror films), it hasn't lost the relaxed vibe, the warm and supportive audiences and the unjaded mode of alt-enthusiasm that represent this city at its finest. People don't bring their low-budget movies to SXSW believing they'll be struck by lightning and rendered into insta-celebrities. But they can be pretty confident they'll have a swell time, overestimate their tolerance for tequila-based beverages and wind up on a patio somewhere at 2 a.m. talking earnestly to some brand-new friends, some of whom, at some point, might actually be able to help them.

For frozen Northerners like me, it's worth coming here in March just for daytime highs in the 70s and 80s, the early-season wildflowers and those flocks of slightly ominous boat-tailed, ravenlike birds who sing so melodiously at dusk. (Hey Texans, what are those things? Grackles?) Then there's the chance to catch a few movies at the Alamo Drafthouse mini-chain, where you can consume excellent beer and decent Tex-Mex cooking at your seat, and compared with which every movie theater in New York should basically be blown up.

As far as what's actually showing on those screens, SXSW is always a defiantly mixed bag. Nothing was more fun this weekend than the movie we didn't get to see. Rodriguez showed us a splatter-laden zombie car chase from "Terror Planet," the faux-'70s exploitation pic that makes up his half of "Grindhouse," and I for one found it completely irresistible. Those who believe that retro-cultural concoctions like "Grindhouse" are ironic, or even campy, are missing the point. As Rodriguez and Knowles made clear, they're geeks' geeks, and their affection -- nay, their adoration -- for the high-concept trash cinema of another age is completely genuine.

Both performed their Tarantino impersonations for us, recalling late-night telephone invitations to Burt Reynolds triple-bill screenings ("He's a sweaty fucking god!" in that squeaky Q.T. voice) and marathon "Dawn of the Dead" board-game sessions. "Quentin seems to have grown up in some mystical community," Knowles said, "where there were these movie theaters with, like, shamanistic projectionists who showed only the coolest shit, movies that nobody else had ever seen anywhere."

Making a film in the grindhouse style, Rodriguez insisted, was not a postmodern affectation but an embrace of freedom. "What really excites me about grindhouse films is that they had to be about ideas," he said. "They didn't have stars in the cast. They didn't have budgets. They had to rely on outrageous ideas and lurid material to get people in the seats. We've got stars in our cast -- and that's kind of weird -- but we're using them the way we would if we didn't."

As you probably know if you care about these things, "Grindhouse" is meticulously constructed to re-create a filmgoing experience that most of its prospective audience probably never had. (I'll tell you about my youthful experiences in the long-gone Lux Theatre of downtown Oakland, Calif., some other time.) Rodriguez's "Terror Planet" will have digitally created scratches, splices, water damage and dye leakage; perversely, since Tarantino's segment (a cars 'n' guns flick called "Death Proof") is actually shot on film, such manipulation will be harder. In between the two "features," we'll see trailers for nonexistent coming attractions; Rodriguez showed us Eli Roth's unbelievably gruesome trailer for a Thanksgiving-themed slasher pic that's horrifying, hilarious and guaranteed not to pass muster with the MPAA. (Wait for the DVD, I guess.)

There was also a packed house and a buzz of anticipation for the premiere of "Manufacturing Dissent," the documentary about Michael Moore made by Canadian filmmakers Rick Caine and Debbie Melnyk. Right-wing docus slagging Moore are a dime a dozen (I think that's literally true), but Caine and Melnyk began their pursuit of Moore as fans, drawn from the Great White North toward the one American they saw speaking truth to pop culture. After months of fruitlessly pursuing His Mikeness for a sit-down interview -- and being persecuted by his handlers and security troops -- they shifted focus, and began to track down the many people willing to badmouth Moore instead.

From his days as a struggling lefty journalist in Flint, Mich., to his current career as a media superstar, Moore has undeniably left a trail of unhappy acquaintances behind him. There is no question that his films contain fictionalized elements, and sometimes distort history and chronology way out of context. He's egotistical, frequently unfair and occasionally downright mean (as in his sandbagging of the senile Charlton Heston in "Bowling for Columbine").

Still, as indie-film guru John Pierson says here, Moore is also a prodigiously entertaining filmmaker whose self-taught gonzo style has utterly transformed the documentary genre. You don't have to agree with him politically, or endorse his methods, to see that. Whether the revolution Moore has wrought has been a good or a bad thing, how much he should be called to account for sacrificing truth to rabble-rousing and what the political value of his work really is -- those are valid and important questions that "Manufacturing Dissent" merely bounces off.

Journalism wonks and students of the left may be interested in hearing more about Moore's brief tenure at Mother Jones in the '80s, or learning precisely what he faked in "Roger & Me," but Caine and Melnyk's film offers only a cautious, orderly catalog of his larger and smaller sins (almost all of them already well publicized), never a coherent argument. That's very polite and Canadian and documentary-film-like, but given the half-accidental similarity of Caine and Melnyk's film to Moore's far more graceful and entertaining "Roger & Me," it isn't exactly satisfying.

Intriguing and suggestive material is assembled here -- I especially appreciated hearing from rock critic Dave Marsh (a Moore hater) and Pierson (an avid defender) -- and "Manufacturing Dissent" should spark debate among Moore's core constituency. But it's something of a missed opportunity. Somebody really needs to delve deep into the symbolic value, and very real limitations, of the left's class clown and über-celebrity. (Disclosure: I met Michael Moore once, and he said my kids were cute. So it probably won't be me.)

My colleague Stephanie Zacharek will review Scott Frank's thriller "The Lookout" when it opens at the end of March, so I'll limit my comments here. Fueled by yet another terrific performance from Joseph Gordon-Levitt (star of "Brick" and "Mysterious Skin"), aka the "young Keanu," it's a curiously satisfying genre picture, with all the tight plotting and meticulous character building you'd expect from the writer of "Out of Sight," "Minority Report" and "Little Man Tate" (among other films).

Sparely shot on the depopulated plains of Kansas -- Frank specifically cites "Capote" as an inspiration, and I also thought of "A History of Violence" -- "The Lookout" is a subtly unsettling picture with a disordered hero. Chris (Gordon-Levitt) is a former high school stud trying to recover from a disabling head injury -- and from the accident (his fault) that caused it and killed two of his friends. Befriended by a charismatic, goateed bad boy named Gary (Matthew Goode, in what should be a breakout role for him), Chris is gradually drawn into an ill-fated robbery scheme, motivated at least as much by his damaged self-esteem as his brain injury.

This is Frank's first film as a director, but after all those years in the movie business he knows what he's doing. What seems at first to be not much more than a well-acted formula picture turns out to be full of little bombs, lines and images that detonate in your head hours or days later. It's too gradual, sinister and methodical for a contemporary Hollywood action movie, and too plot-driven for a classic character-based indie. Is it an honest entertainment or a work of art? Irrelevant question, and anyway the answer is a snaky, slithery somewhere in between. (My interviews with Frank and Gordon-Levitt are coming soon to Salon Conversations.)

That leaves Alan Cumming's indescribable and inexplicable "Suffering Man's Charity," which also premiered in downtown Austin's lovely Paramount Theater on Friday, just before "The Lookout" and for a much smaller crowd. Those who didn't show up missed seeing Cumming himself as a queeny, middle-aged music teacher who winds up imprisoning and torturing a young hustler played by David Boreanaz (of "Angel" and "Buffy" fame), who is wearing women's underwear and tied up with Christmas lights and duct tape (oh, and heavily medicated with sleeping pills). "Suffering Man's Charity" is just that kind of movie: It opens as if it's going to be a sad-sack gay comedy in a lesser Tennessee Williams mode. And then it goes completely insane.

Given Cumming's far-reaching showbiz as a Shakespearean actor, kiddie-film villain (in "Garfield" and the "Spy Kids" series), novelist, indie director ("The Anniversary Party") and outspoken activist on gay issues, I have no doubt he can find a distributor for this willfully grotesque picture eventually. It's either a total disaster or a midnight movie cult hit in the making, and on first viewing I'm not sure which. As I told myself while I stumbled out into the steamy streets of Austin, for better or worse there was nothing like that at Sundance.