The road goes on for John and Elizabeth

Confronted with a second bout of cancer, Elizabeth Edwards remains determined to campaign with her husband -- all the way to the White House. 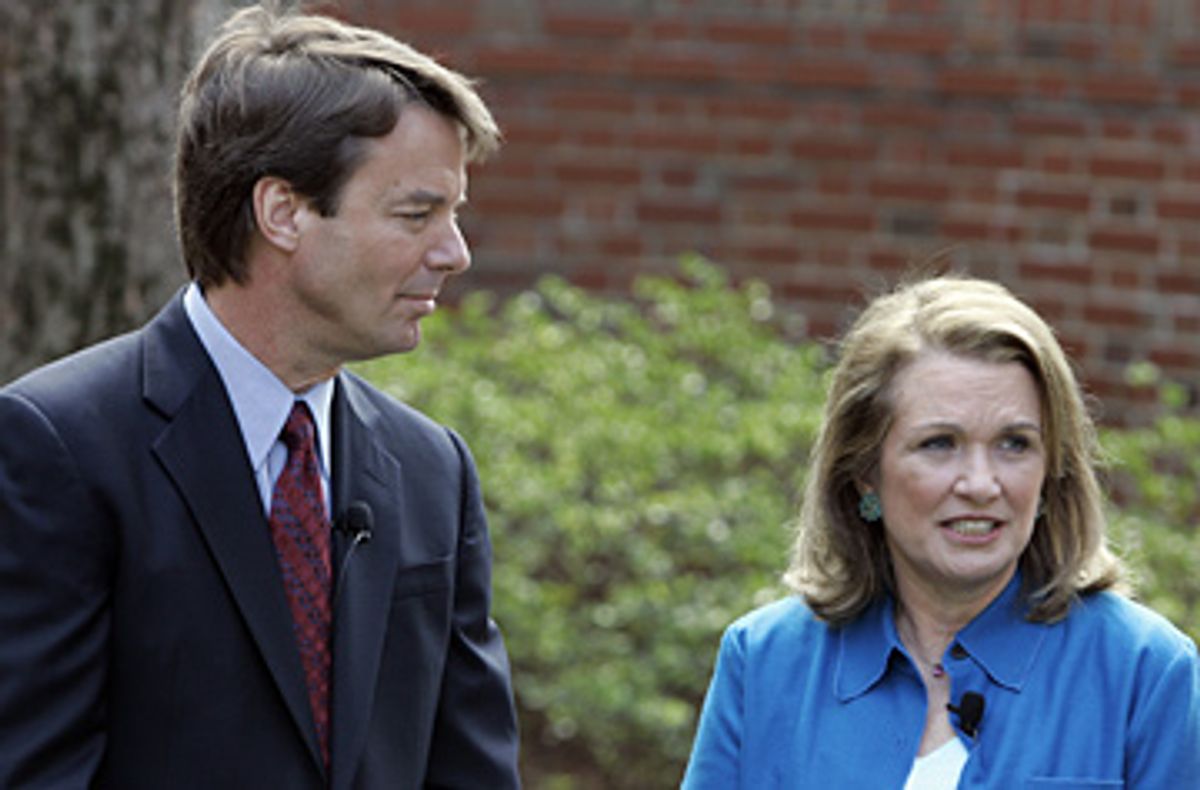 They were words that no one ever wants to say about the person he loves: "When the cancer goes from the breast and shows in the bone, which it's doing now, it's no longer curable. It is completely treatable."

At a remarkable and emotionally raw Thursday afternoon press conference, there was John Edwards -- husband, father and presidential candidate -- putting the best interpretation on the recurrence of his wife Elizabeth's cancer. "Many people in similar circumstances," he said, "have lived many years undergoing treatment."

In a media environment where counterfeit emotion often seems more convincing than genuine sentiment, this turning-point moment in Elizabeth Edwards' life and perhaps the 2008 campaign was the ultimate in reality TV -- and it had the added virtue of being true. During the opening moments of the press conference, it was difficult to watch Elizabeth Edwards as she seemingly fought to maintain her composure. But then her husband began talking about how "we've been married for 30 years" and a brave smile flickered across her face, soon followed by an actual grin.

Edwards said toward the end of the press conference, "Any time, any place I need to be with Elizabeth, I will be there. Period. It doesn't matter what's happening in the campaign." The former North Carolina senator demonstrated that in Iowa on Tuesday where he delivered a major noontime energy speech and was then slated to meet with state legislators and appear at a house party in Indianola. As I watched Edwards mingle with voters after the speech, I noted that his once-boyish face seemed creased with worry and he seemed distracted, even as he talked earnestly about carbon dioxide emissions and ethanol, Iowa's favorite fuel source.

What few knew then was that Elizabeth had already had a troubling X-ray Monday for a broken rib that raised the possibility of a new cancer and that more tests were slated. Immediately after the energy address, Edwards called his wife's doctor and spoke with her for 15 minutes. According to Rob Tully, a former Iowa state Democratic chairman and major Edwards backer, the candidate then called Elizabeth and asked her directly whether she wanted him there for the follow-up appointment. "She said yes," Tully recalled, "and John immediately turned around, without any hesitation, and said, 'Cancel everything for the rest of the day and tomorrow.'"

In the heat of a presidential campaign, it is easy to forget that the candidates are human beings, with the normal run of joys and disappointments, rather than automatons powered solely by ambition. But now we are confronted with the grim realities of the intersection of the personal and the political. Edwards' announcement that he would be plowing ahead with his campaign -- appearances and fundraisers are scheduled for Thursday night and Friday morning in New York -- is as much a tribute to Elizabeth's determination as anything else.

She has always been a fervent believer in his destiny. In late 2002, as Edwards was still wavering on a presidential race, Elizabeth told me in an interview that beating George W. Bush was her transcendent cause. "We have to win," she said. "The nation can't afford for us to lose." I can still hear the passion in her voice as she explained how her husband, then a first-term senator from North Carolina, was the Democrat with the best chance to defeat George W. Bush in 2004.

Elizabeth Edwards has never been a conventional political wife, smiling mechanically from the sidelines, but she also has never seen herself in messianic terms as the second coming of Eleanor Roosevelt. Her directness, her openness and her disarming candor have been one of the campaign's strongest assets. During the 2004 primary season, she virtually single-handedly snagged the endorsement of influential New Hampshire state Sen. Lou D'Allesandro. And as she explains in her 2006 book, "Saving Graces," she was an early convert to the power of the Internet, since she found comfort in online support groups after the death of their 16-year-old son, Wade, in a 1996 auto crash. As a result, this 57-year-old former graduate student in English turned bankruptcy lawyer, who listens to C-SPAN in her car, has become one of the greatest boosters of the bloggers in any 2008 presidential campaign.

Yet in the stiff-upper-lip annals of presidential campaigns, there have been few more wrenching examples of stoicism under fire than how she handled the discovery that she had breast cancer in the closing days of the 2004 race. Rather than calling off her campaign appearances, she snuck in a visit to her hometown doctor during a stop in Raleigh and scheduled the biopsy for the day after the election in Boston, the site of the planned Democratic celebration. She writes in "Saving Graces" about the moment when the realities of cancer and political defeat came together: "As I walked to my room, I wiped away my tears. There would be plenty of times in the days and months to come when I would need John; now it was his time to need me, and I couldn't be in tears."

Even though she was pronounced cancer-free after a grueling bout of treatment in 2005, she never has exuded the false bravado that the disease had been permanently vanquished. Rather, her view has been that what comes her and her husband's way can be handled, because after the death of a child, life has no terrors. In an interview with More magazine last August (conducted by my wife, Meryl Gordon), Elizabeth said flatly, "I'm convinced that I'm going to beat cancer. If I have to beat it twice, I have to beat it twice."

Living with cancer is one of those clichés that has been stripped of its emotional force by constant repetition. But Elizabeth Edwards has matter-of-factly defined it as continuing to go on with your life, especially as she put it Thursday, "I don't look sickly, I don't feel sickly." As she implied with those words and by the example of her resilience, you can live with cancer just as easily in the White House as anywhere else.