Hillary and Obama and McCain and Romney are all rolling in it. But how much does big money matter in the nomination fight? 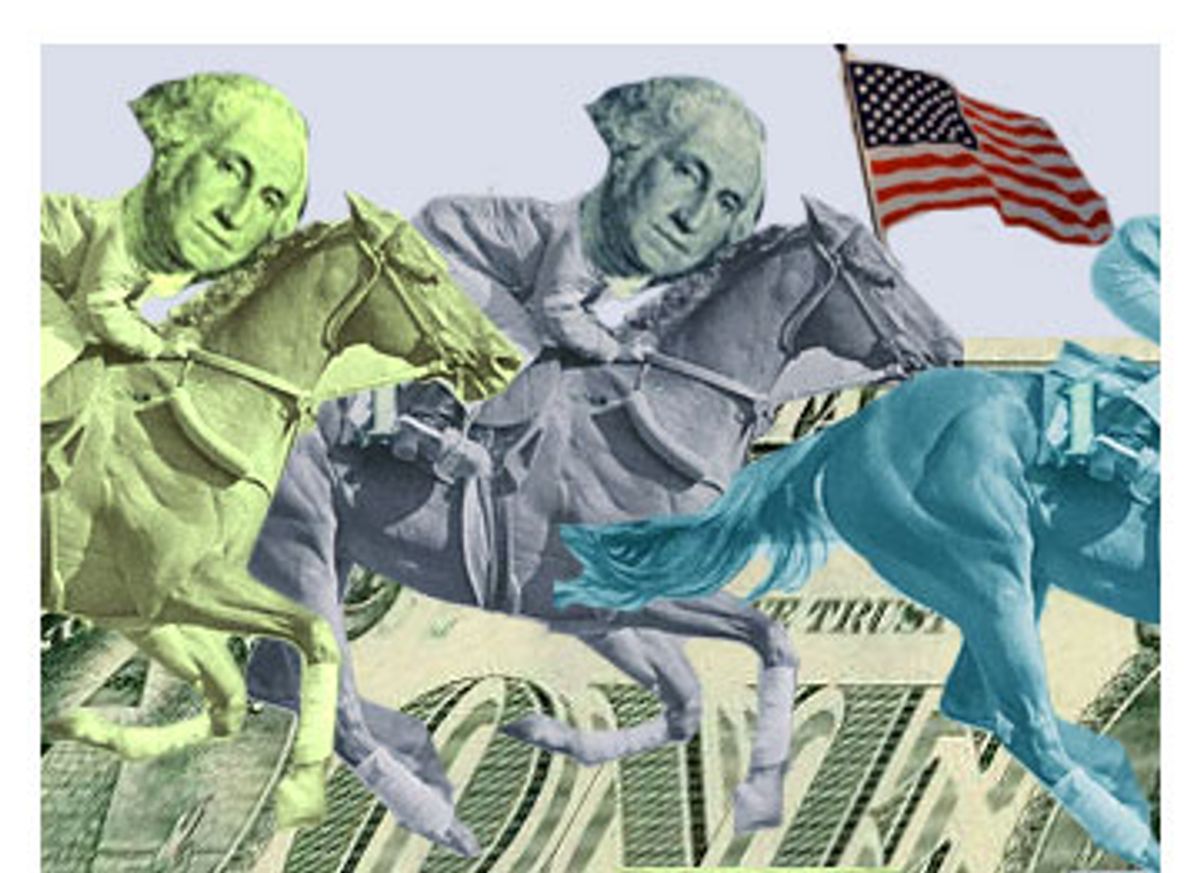 Four years ago at this time, Howard Dean was dismissed by political handicappers as a quixotic dreamer because his presidential campaign scraped up an anemic $2.6 million during the first quarter of 2003. Six months later, after Dean set a Democratic Party record by raising $15 million in the third quarter, the same pundits hailed his seeming inevitability as the Democratic nominee. That is what campaign cash can do in presidential politics -- inspire scorn and awe, sometimes about the same candidate in the same year.

What gives the dramatic arc of the Dean campaign such renewed relevance is that early this week the 2008 presidential candidates will release their initial fundraising results. With more than nine months to go before the Iowa caucuses, political reporters are pantingly eager for any empirical data, so these financial returns will be treated with the reverence normally reserved for stock tips from Warren Buffett.

John Edwards reported collecting a very solid $14 million (with $13 million available for the primaries). The other Democratic candidates did little to improve their second-tier images, with Bill Richardson announcing $6 million, Chris Dodd $4 million and the lagging Joe Biden $3 million.

Mitt Romney is currently pacing the Republican field with $23 million (including a $2.3 million personal loan) with Rudy Giuliani cashing in on his celebrity to the tune of $14 million. But the biggest GOP news was the fundraising engine that couldn't: John McCain, once the presumed favorite for the nomination, only garnered $12.5 million, admittedly a sizeable sum in a normal political year.

But slavish attention to these numbers masks the underlying reality: The nomination fights in both parties remain wide open no matter which candidates claim the mantle of Daddy (or Mommy) Warbucks.

More money is sloshing around presidential politics -- particularly on the Democratic side -- than the leading candidates probably can effectively spend to win the nomination. The number of political partisans willing to ante up $2,300 -- the maximum individual contribution for the primaries and generally the price of admission to meet a major candidate in small-room fundraisers -- is growing exponentially. As California venture capitalist Mark Gorenberg, a Democratic stalwart who is raising money for Barack Obama, puts it, "For the most part, what I am seeing is new people in the system. Campaign finance reform really changed everything. It created this sense of middle-class activism."

Now that Hillary Clinton has blown the lid off Dean's record of raising $15 million in a single quarter, the major question remaining is whether, as expected, Barack Obama came close to matching her swag. While the New York senator can call on the party establishment (and her husband, the most alluring fundraising attraction in either party), Obama is inspiring new political donors, much as Bill Bradley did in the 2000 campaign when he ran virtually even with incumbent Vice President Al Gore in the cash countdown.

The Republicans should know better than anyone that money does not necessarily buy love in presidential politics. John Connally, Phil Gramm and even the ungainly Steve Forbes all naively believed that the road to the GOP convention was paved with gold. Even George W. Bush squandered $70 million on his way to a humiliating defeat in the 2000 New Hampshire primary that almost cost him the nomination.

Part of the reason for the confusion swirling around the coverage of political fundraising is that there is no firm consensus about how much money is enough in a presidential nomination fight. A news article in the New York Times on Friday declared, "The leading candidates in both parties estimate they will need to raise at least $75 million." That glib calculation assumes that the winning candidates need to make a major TV advertising commitment in the roughly 20 states that are expected to hold primaries on Feb. 5. But free media shapes the presidential race -- and there is no publicity that rivals winning Iowa, New Hampshire and other early states like South Carolina. As William Mayer, a political science professor at Northeastern University and an expert on presidential campaigns, says, "Candidates shouldn't count on the notion that any amount of money will save them if they're in any kind of trouble after Iowa and New Hampshire."

Of course, it is not possible to run a credible campaign for president with supermarket green stamps and piggy-bank change. Much as former Iowa Gov. Tom Vilsack had to drop out of the Democratic race in February because he was already $400,000 in debt, daunting first-quarter numbers may bring on the demise of other presidential ambitions. The short-term spending demands will be particularly acute for the back-bench Republican candidates since they will be expected to spend at minimum around $3 million to compete in mid-August in a meaningless (but heavily symbolic) exercise called the Iowa Straw Poll.

Despite the likely breathless tenor of dollar-derby coverage this week, money is not necessarily conclusive in presidential politics. In that sense, the race for the White House is like the other national pastime -- baseball -- where the New York Yankees have not been to the World Series since 2000, despite having a payroll 50 percent larger than that of their nearest rival, the Boston Red Sox. Mayer posits the "Parkinson's Law of Campaigns," which he defines as "If you have money, you will spend it, whether it helps or not."

Dean underscored that thesis when he blew through $40 million on his way to a third-place finish in Iowa. That is a good reason to remain skeptical even though Hillary Clinton and Mitt Romney have already displayed a Midas touch that might make Scrooge McDuck envious.