Whatever the outcome of his presidential campaign, this time around Edwards won't regret being an overly cautious candidate. 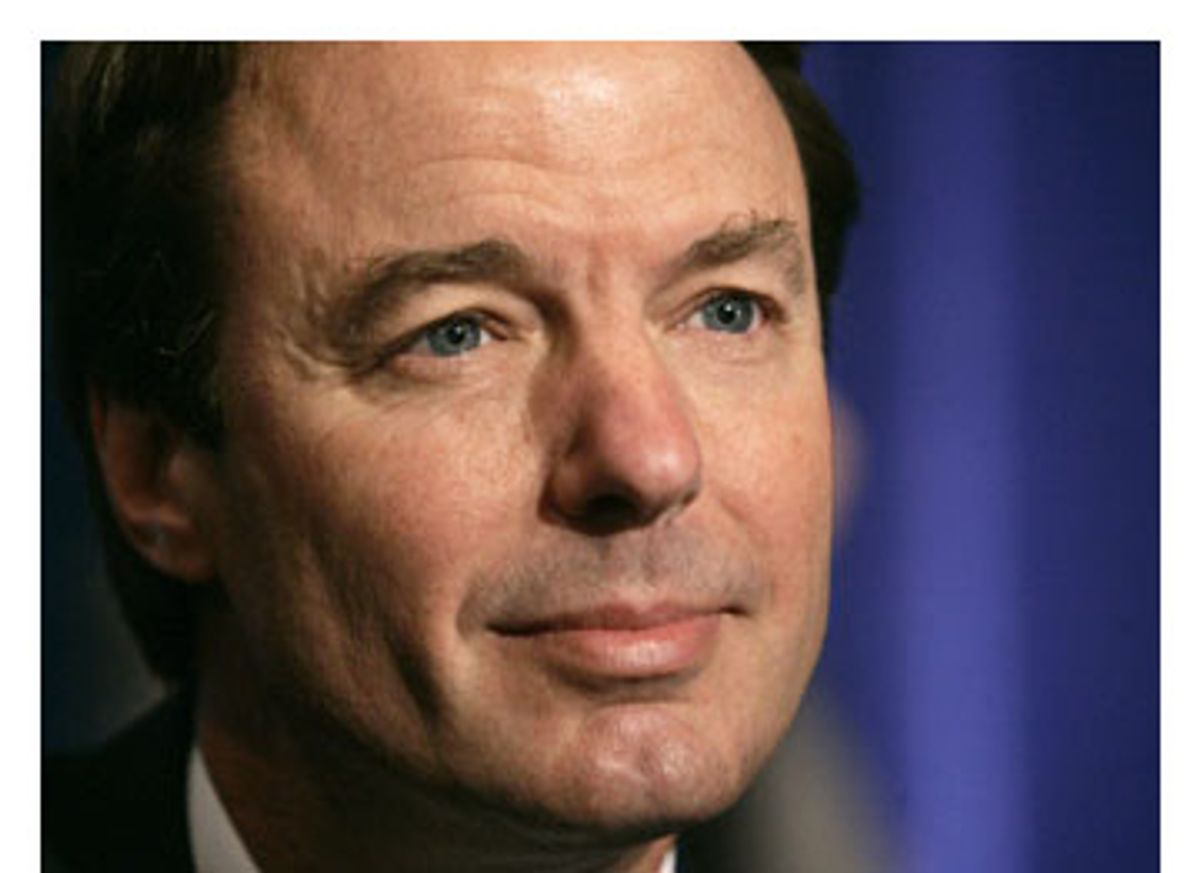 Unlike the word-for-word repetition that gave a whiff of synthetic glibness to his son-of-a-millworker stump speeches four years ago, John Edwards' style this time around is more improvisational. But even though the language now varies, there is a riff at the core of nearly every Edwards pitch to voters.

Here is how the 2004 vice presidential nominee (an interlude Edwards almost never voluntarily mentions) put it Tuesday night in Cedar Rapids as he spoke to about 800 Democrats packed into the gym at Prairie High School: "We're past the time for small, cautious, incremental steps. And we're past the time for rhetoric. Rhetoric is great -- it makes us all feel good -- but it doesn't change anything. The question is how we're going to bring about the big, bold transformational change that's needed in America."

Unraveling Edwards' subtext does not require a Derrida-spouting graduate student. Hillary Clinton is the obvious apostle of these "cautious, incremental steps," while Barack Obama is the undeniable master of feel-good rhetoric. What is most intriguing about the Edwards 2.0 campaign is how a once carefully calibrated, pro-war, mainstream Democrat has fashioned himself into the candidate of "big, bold transformational change."

The Edwards campaign is surging, partly because of the emotional reaction to Elizabeth Edwards' gallantry in facing up to the recurrence of her cancer, which has been diagnosed as incurable. This was the week that she began her cancer treatment, confiding with cautious optimism in an interview Wednesday night, "I talked to my doctor twice today and she ran through a list of side effects and I haven't had any of them." But neither she nor her husband want to be defined by her disease; when I asked Elizabeth a question about the campaign, rather than her health, she exclaimed, "Yay!"

This week Edwards drew crowds ranging from 500, at a lunch Wednesday in Davenport, to more than 1,500 that evening in Des Moines. These were more Democrats than Edwards would often see in a week during his near-victorious 2004 campaign in Iowa. With Obama and Clinton also attracting the kind of political audiences normally only seen right before the November elections, it is clear that Iowans are reveling in the three-way race in their first-in-the-nation state. But, as Edwards cautioned reporters, "This is so early. We've got a long way to go. I'm seasoned enough, having been through it, to know that there will be a lot of ups and downs."

Even though he had until recently been overshadowed by Clinton and Obama, Edwards has always had built-in strengths in the nomination fight. Ever since his surprisingly close second-place finish in the 2004 caucuses, Edwards has nurtured a rapport with Iowa Democrats, whose verdict next January will set the tone for the nomination fight. As Jeff Link, who ran former Iowa Gov. Tom Vilsack's now-abandoned presidential campaign (and who is now neutral in the race), put it, "Edwards has worked the state of Iowa as well as anyone. He's stayed in touch with his supporters from 2004 and he's running a very effective campaign."

The former one-term North Carolina senator is also the only candidate who has personally run for president in modern times -- Bill Clinton's 1992 race is ancient history in politics, as is Joe Biden's short-lived 1988 effort. Edwards understands both the Zen-like patience required -- he was seemingly doomed in Iowa in 2004 until he received the endorsement of the Des Moines Register right before the caucuses -- and the whirling-dervish pace of the primaries.

Sitting down with Edwards after the Cedar Rapids speech for an interview in the unlikely setting of a home-economics classroom, I inquired about his new favorite word, "bold," remarking that I did not recall it as part of his 2004 lexicon. "You probably never heard it from me," he freely admitted. Explaining what had changed, Edwards cited the deterioration of everything from the Iraq war to the "dysfunctional" healthcare system.

Then the 53-year-old former trial lawyer, who was mentioned as a presidential possibility from the moment he entered the Senate in 1999, added, "I think it's also combined with me being more seasoned and more comfortable with taking stronger, bolder positions." Edwards returned to this theme in response to an interview question about what he had learned from voting for authorization for the Iraq war. "Making a mistake, which I did, about something that important gives you enormous strength going forward," he said, trying to make a virtue out of necessity. "Because now I have absolutely no hesitation standing behind my independent judgment about what needs to be done. I don't care if it's popular or unpopular. Or what the political considerations are. You probably see some element of that in everything I'm doing."

Elizabeth Edwards is the publicly introspective member of the couple, often filling in the gaps to explain her husband's evolution as a candidate. Interviewing her separately, I asked her about what they learned from 2004. "As a first-time candidate relying on the advice of others," she said, "he felt that he was more cautious than he needed to be. He's freed from that. So what you see are not just detailed policies, but you also see a confidence in presenting them."

In contrast to Clinton and Obama, Edwards has moved quickly to stake out the left flank on domestic issues. His healthcare plan -- which combines federal subsidies with mandates on companies and individuals to provide and buy health insurance -- promises universal coverage in his first term in the White House. His proposal to combat global warming (announced in Iowa on the day that he learned of Elizabeth's new cancer diagnosis) calls for capping the release of greenhouse gases by 2010 and gradually reducing the ceiling for them through the coming decade. To reduce poverty, he has reached back into the old liberal playbook to call for the creation of 1 million public service jobs for those on the economic margins.

Even though the electoral track record of economic truth tellers in presidential politics is not inspiring, Edwards is painstakingly explicit about the cost of his proposals, with the big-ticket item $90 billion to $120 billion a year for universal healthcare coverage. In a response to a question at a noontime rally in Davenport on Wednesday afternoon, Edwards said bluntly, "If you're getting universal healthcare, you're not helping the deficit. If you're going to transform the way we use energy, that costs money. If you going to do something about poverty, that costs money. I think everybody running for president should tell you what their priorities are. My priority is not to make the deficit worse, but [reducing it] is not my highest priority."

Embedded in that answer is a major fault line in the coming Democratic debate. The Clinton administration's legacy is a balanced budget -- and, presumably, Hillary Clinton's domestic positions will reflect the mantra that the economic health of the nation requires confronting the deficit. Edwards implied position is that a fixation on deficit-reduction limits a presidential candidate's ability to propose ambitious programs.

In a sense, Edwards has always been an unlikely establishment Democrat who cleaves to the orthodoxies of Washington politics. Unlike virtually any other recent Democratic presidential contender, Edwards is a completely self-made figure, who made it to the forefront of politics without the help of an Ivy League pedigree or its equivalent. Hillary Clinton (Wellesley and Yale Law School) and Barack Obama (Columbia University and Harvard Law) were ticketed for the educational success track at a point in their lives when Edwards was still majoring in textiles at North Carolina State. Asked about his atypical educational background at the Davenport town meeting, he explained, "Coming from Robbins, North Carolina, where I was from, getting a liberal arts degree didn't make sense. I wanted to make sure that I could get work."

The Edwards campaign is based on a simple political calculus: The race for the nomination will be won or lost in the four states (Iowa, Nevada, New Hampshire and South Carolina) that come before the mass bedlam of half the nation voting next Feb. 5. Having raised $13 million in the first quarter (about half of the Hillary and Obama war chests), the Edwards campaign can realistically see its way to roughly a $40 million budget for the nomination fight. That is likely to be enough to compete through South Carolina on Jan. 29, but it leaves Edwards with no fallback plan if he fails to win convincingly in the early going.

The candidate's strength lies in Iowa and in his birthplace of South Carolina, whose primary he won last time. The New Hampshire primary (in which he finished fourth in 2004) has always loomed as an obstacle, but the Edwards campaign was also burbling this week over a new CNN/WMUR poll that showed the three leading Democrats bunched at the top, with Clinton's lead within the survey's margin of error.

Even though Elizabeth Edwards' cancer was a muted topic in Iowa this week, it still carries an emotional rawness at odds with the smile-button verities of presidential politics. Asked at the town meeting in Davenport about her own history of mammograms, she responded with painful honesty, "[My cancer] had a chance to migrate because I sat at home doing whatever I thought was important and didn't get mammograms ... I do not have to be in this situation. I am responsible for putting myself, this man [Edwards], my family and, frankly, all of you at risk too. Because I think you deserve to vote for this man."

The Edwards campaign was always a high-risk venture, since there was no point in his playing it safe when he was running against a former first lady turned senator and the most charismatic newcomer to American politics in modern memory. But now, since Elizabeth's heartbreaking diagnosis, this is truly the nothing-left-to-lose campaign. Whatever his ultimate political fate, John Edwards is unlikely this time to end up with regrets about being too timorous a candidate in the race of his life.