A powwow on '08 showed the GOP sweating Bush's war and Dems worried about more than just Iowa. 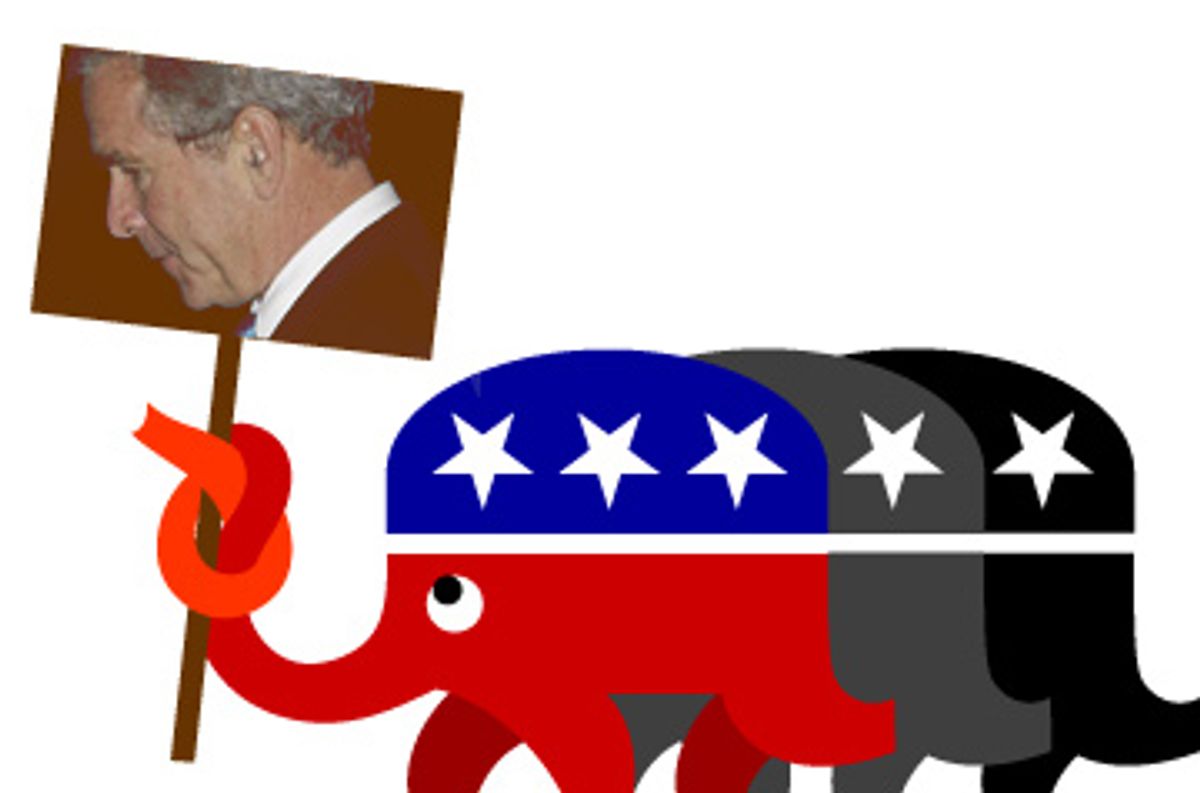 The Republican stalwarts who will select their party's nominee continue to demand that the GOP presidential contenders support George W. Bush's surge strategy in Iraq. That was the consensus early last month among the top political advisors to John McCain, Mitt Romney and Rudy Giuliani at an invitation-only conference I attended at the Kennedy School at Harvard, a transcript of which was made public this week.

"Speaking as sort of a student of public opinion on where are Republican voters on this, I think you do see them sort of standing tall and standing behind the president and supporting the surge," said Alex Gage, a Romney strategist. Giuliani's campaign manager Mike DuHaime said, "Just like the major candidates are all in similar positions on the war in Iraq, so are many Republican voters." Rick Davis, who was McCain's 2000 campaign manager and chairs his current effort, put it bluntly, "We are all pretty much in the same boat."

While none of the Republican strategists described it this way, the leading GOP contenders are torn between appealing to the party's pro-war base voters and courting disaster in November, or playing to a dovish general-election audience and risking losing the primaries. Ironically, this is what Republicans chortled over in 2004 when it appeared that the Democrats were poised to nominate antiwar crusader Howard Dean. Now it is turnabout time -- and the leading GOP candidates cannot dissent too audibly from Bush's war goals. "I've been in primaries where [the candidates] have looked ahead to the general election," said Bill McInturff, McCain's pollster. "They tended not to be very successful."

McInturff contended that "even the Republican electorate is dissatisfied with the conduct of the war, even if they agree with the policy." But even though the president's approval ratings have been consistently below 40 percent, woe to any Republican contender who criticizes Bush personally. "People in our party admire his consistency, his leadership and his personal dimensions," said McInturff. "And you had better be very, very careful about how you talk about the president around those things."

Sponsored by the Institute of Politics and the Joan Shorenstein Center on the Press, Politics and Public Policy, the March 5 GOP seminar was designed to gauge whether top political operatives would speak with relative candor at the outset of the presidential race. (The results were mixed in this test of the bygone department-store cliché: Does Macy's tell Gimbel's?) A Democratic version featuring the Hillary Clinton, Barack Obama and John Edwards campaigns was held on March 19. Transcripts of both are available here. (Disclosure: I was a fellow at the Shorenstein Center in 2005.)

What was striking during the Democratic session was the shared confidence that the presidential field was set in concrete and that the nominee was represented in the room. Mark Alexander, a policy advisor to Obama, predicted, "I think the three of us will be diving for the tape." There was animated discussion of Al Gore's prospects for the Nobel Peace Prize, but scant concern that he would mount a second campaign for the White House.

In contrast, the GOP operatives were looking nervously over their shoulders in anticipation of a late entry into the demolition derby that is the Republican nomination fight. Mark McKinnon, who was Bush's media consultant and is currently a lecturer at the Shorenstein Center, predicted flatly, "There is a very good chance that Newt Gingrich will get into the race. I think he'll really stir it up. I think he'll change the dynamic considerably and I think he could even win a primary or two." McInturff expressed a similar theory about Gingrich: "I think he'll run his ... own style of campaign. It's going to be typically Newt. It will be a little different."

No one in either party expressed any confidence that their candidate had developed a strategy for competing on Feb. 5 when roughly half the voters in the nation will participate in more than 20 state primaries. Washington attorney Ben Ginsberg, who is advising Romney, noted pointedly, "There will be more states at play on Feb. 5 than there were target states in either [the] 2000 or 2004 [general elections]."

What this means in practice is that the early states -- Iowa, New Hampshire and South Carolina for both parties, plus Nevada for the Democrats -- are likely to serve as Nielsen test audiences for the entire nation. Nick Baldick, who ran Edwards' 2004 campaign and is advising him this cycle, said, "I think exponentially more important [are] not just Iowa, but all four of the now early states. Not even Senator Clinton can buy enough television on Feb. 5 if [she doesn't] win enough states of the first four."

The Kennedy School conferences reflected a bipartisan humility about the unpredictability of campaigns and the volatility of voter sentiments. Having been through wringer and spin cycle of presidential politics, these operatives all showed a hard-earned respect for the Law of Unanticipated Consequences. Mandy Grunwald, who was Bill Clinton's media advisor in 1992 and is playing the same role for Hillary this time, said, "It's part of the lovely fun of this democracy that you don't know what's going to happen, none of us do. We are all going to have near-death experiences. Great things are going to happen. Horrible things are going to happen. We can't tell what they will be."

Grunwald directed those comments at political reporters who exude a false sense of certainty in their coverage. But the same cautionary words can be applied to stay-at-home soothsayers who believe they have the foresight to divine the nominees in the most wide-open presidential cycle since 1952.