France's answer to Rudy Giuliani is riding tough talk on crime all the way to the presidency. 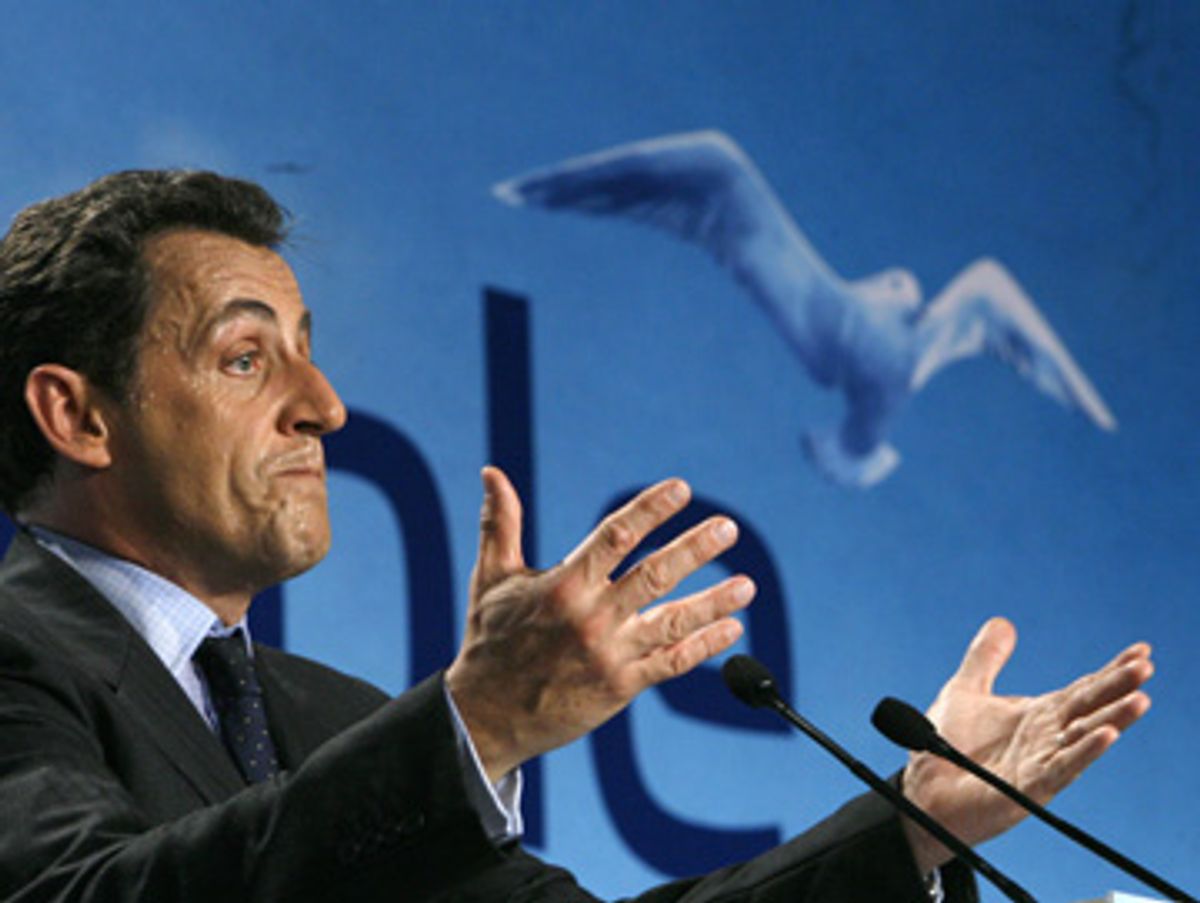 On the cover of the Economist this week, in an issue partly devoted to the French presidential elections that kick off on Sunday, the president of France's ruling center-right UMP party, 52-year-old Nicolas Sarkozy, is portrayed as Napoleon charging to France's rescue on a white horse.

But no matter how apt the image -- much like Napoleon, Sarkozy is short, hot-tempered, ambitious and authoritarian -- as a Paris native who lived in New York City in the 1990s and into the 21st century, I am reminded less of the late emperor of France and more of a certain contemporary American. "Sarko," who is almost certain to be one of the two candidates who will advance from Sunday's first round to the final round on May 6, is the Gallic version of former New York City mayor and current Republican presidential contender Rudy Giuliani.

A self-styled radical reformer who early in the presidential campaign advocated "La Rupture" with the old, stagnant French way of doing things and vowed to tackle unemployment and modernize the welfare state, Sarkozy seems to have modeled his political persona on his American counterpart. He is tough on crime, prone to polarizing the public, and tosses off ready-made solutions to the host of ills that ail France.

As minister of the interior in charge of national security and police forces from May 2002 to March 2004 and then again from June 2005 to March 2007, Sarkozy's successive tenures have earned him the nickname "France's top cop." During the wave of violence that spread through France's banlieues -- the country's impoverished, largely immigrant working-class suburbs -- in the fall of 2005, he helped ignite the fire shortly after a police chase gone awry led to the death of two banlieue teenagers hidden in an electric facility. First he proclaimed the teens delinquents, then he proclaimed the police innocent prior to a full investigation. It was not long after he had called suburban youth "racaille," or "scum." It reminded me of Giuliani's statement, after the death of Patrick Dorismond at the hands of cops in early 2000, that the victim was "no altar boy."

Although his first term as interior minister was marked by conciliatory steps toward French minorities -- he notably proposed that France endorse affirmative action -- during his second tenure, Sarkozy did everything imaginable to deserve the "top cop" moniker, including sending police into primary schools as part of his strategy to fight illegal immigration and trying to push through legislation that would detect future delinquency in the behavioral problems of 3-year-olds. (In a recent interview with Philosophie magazine, he also stated his belief that pedophiles are "born that way.")

In the final weeks of this first round of campaigning, actively courting the far-right voters who put Jean-Marie Le Pen in the presidential runoff in 2002, Sarkozy sparked yet more controversy by offering to create a Ministry of Integration and National Identity, with its nauseating whiff of Vichyism, and, in a snide reference to Muslim traditions, stated that anyone who would consider "slaughtering sheep in their bathtubs" was not welcome in France.

The tough-guy stance, the insensitive and outrageous pronouncements, the antagonizing of the underclass and the self-cast "man of action" persona -- how not to think of Rudy? Many of the problems faced by France today -- persistent unemployment, rising crime, a slowed economy -- reared their heads in New York before Giuliani was voted in. New York and Paris are even alike in having a wealthy white center ringed by poorer neighborhoods full of high-rise housing projects.

The Sarkozy/Giuliani parallel is one I am sure Sarkozy would relish, since Giuliani is as much known in France for his "travail admirable" in ridding New York of crime as for his handling of Sept. 11. There is little recognition, except in well-informed circles, of the many factors -- demographic, economic, historical -- that helped create the drop in crime for which he is credited.

An avowed Americanophile, Sarkozy paid Giuliani an informal yet well-publicized visit in the summer of 2002, right at the beginning of his first tenure as minister of the interior. Although no one knows what they talked about for an hour and a half (and Sarkozy denied at the time that he had come to "copy" the New York model), many of his techniques as interior minister bear an uncanny similarity to those used by Giuliani as mayor.

First and foremost is an obsession with statistics and tangible results, which Sarkozy put into play in the summer of 2002, when he stated that police would now work toward precise goals and routinely be evaluated, adding that "the results would determine the future of their careers." There were clear echoes of the CompStat system first implemented by the NYPD and credited with pushing crime down in once dangerous neighborhoods.

Sarkozy was also, and still is, a vocal advocate for zero tolerance and has crusaded for tougher treatment of repeat offenders. He instituted a December 2005 law that, among other things, allowed for immediate imprisoning of convicted repeat offenders and instated the use of electronic monitoring bracelets, and also proclaimed that "up to 50 percent of crimes and misdemeanors are committed by 5 percent of delinquents, always the same ones."

He also recently vowed, if elected, to shrink the welfare rolls by prohibiting unemployment recipients from refusing two consecutive job offers and by making some form of work mandatory for recipients of the state-dispensed minimum social stipend.

To anyone who witnessed the actions, and heard the implacable discourse, of the Giuliani administration, there is something almost nostalgic about this catalog of laws and incentives. The same code words are bandied about, the same certainties, the same abrupt and oversimplified answers to complex problems like crime or illegal immigration.

Even conceding that Giuliani's measures -- and not the booming '90s economy, the end of the crack epidemic, and the influx of immigrants -- were the key to solving New York's crime problem, things work differently in France. Similar demographic trends like immigration play out in radically different ways, and there is no guarantee the stars would align for Sarko the way they did for Rudy. So far, in fact, they haven't.

Contrary to what Sarkozy has trumpeted, the record of his fragmented four-year tenure is less than stellar. Violent crime, for one, has actually risen under his watch. In a book that was originally scheduled to come out before the elections but has now been postponed, Serge Portelli, the vice president of the Paris Court of Law, suggests that crime has been vastly under-reported under Sarkozy and contends that his "punishment rage" toward criminal and episodic abuse of the country's judges, whom he deems "soft on crime," are cause for tremendous concern.

"[Sarkozy] tosses the public a few simplistic solutions without giving a thought to their real consequences," Portelli told me on the phone today. "To me there is something frighteningly mechanical about that; we're headed for a catastrophe [if he wins]."

But Sarkozy's closest competitors in the presidential race have offered muddled messages at best when it comes to crime. During the Socialist Party's presidential primary, Ségolène Royal broke new ground when she advocated military supervision of juvenile delinquents. Where America's Democratic politicians might run to the left to win a primary and run to the right to win the general election, for France's main liberal party the process is reversed. After advocating U.S.-style boot camps for youth in the primary, Royal has more or less flip-flopped on the issue. She has to run to the left to win enough votes on Sunday to make it to the May 6 runoff.

Admittedly, a lasting solution in the field cannot be encapsulated in neat sound bites, but a recent scuffle at the Gare du Nord train station pitting banlieue youth against police forces left the left vulnerable to attacks by Sarkozy, who claimed that "authority is on our side; fraud and rioters on the other." Royal countered by attacking Sarkozy's record, but her meager riposte essentially consisted of talk of "reestablishing trust," "doing away with the logic of conflict" and installing "a logic of regrouping."

Centrist François Bayrou of the UDF, meanwhile, the other candidate most likely to face Sarko on May 6, must have come up with some kind of crime policy, but despite my best intentions I cannot bring it to mind. And I'm a reasonably well-informed citizen.

In fact, the real issue on Sunday will be Sarko; the election has turned into a referendum on his personality. To the degree that the campaign has been about any substantive issues, like crime or the economy, it's been about whether the other candidates and the voters agree or disagree with Sarko. The Sarkozy voters to know are convinced, much like the Economist, that he is the only candidate capable of giving France the economic reform they feel it needs. They think he has shown, through his tenacity as minister of the interior, that he is brave (and willing) enough to attack French sacred cows like protective labor laws and heavy taxation, and confront the nation's tentacular bureaucracy. As for his ideas about immigration and crime, they mostly look the other way.

From his opponents, the reactions to Sarkozy range from the articulate -- he is economically protectionist, his obsession with security has not led to a significant drop in crime rates -- to the passionate and near-hysterical. All over Paris, his presidential campaign posters have been defaced by a Hitler mustache and a swastika. Royal has even hinted at possible "civil war" were he to be elected.

Yet Sarko is ahead in every 11th-hour poll. And a staggering 30 percent of voters are still undecided, largely because they can't figure out which non-Sarko option to choose. In the flurry of polling and paranoia spurred by this indecision, which hounds the last minutes of this first round of campaigning, the dominant question among many of my own friends seems to be, how can we stop Sarkozy's accession to power?

Though many intellectuals who usually vote on the extreme left fringes of the political spectrum here are calling for a Royal vote, and though center-left daily Le Monde said in an editorial today that only Royal offered a realistic alternative to Sarkozy, many French voters feel that the centrist Bayrou is best armed to beat out Sarkozy in the runoff. And they endlessly conjecture, hesitate and strategize about their vote. An architect friend whose entire family history is steeped in communism and who has only ever voted Socialist, is casting her ballot for Bayrou for this reason, and she is not an isolated example.

None of this, however, seems to have dented Sarkozy's confidence that he will make it to Round 2. In a gesture of hubris not inconsistent with his personality, he has detailed, in the pages of conservative daily Le Figaro, the measures he would take in the summer following his election. Mandatory prison sentences for repeat offenders and drastic reduction of the welfare rolls are on the menu.

Elisabeth Franck-Dumas is a writer living in Paris.