Are political consultants getting rich off your money?

The 2008 presidential contenders have raised an unprecedented amount of campaign cash -- and strategists, pollsters and media consultants will reap the monetary rewards. 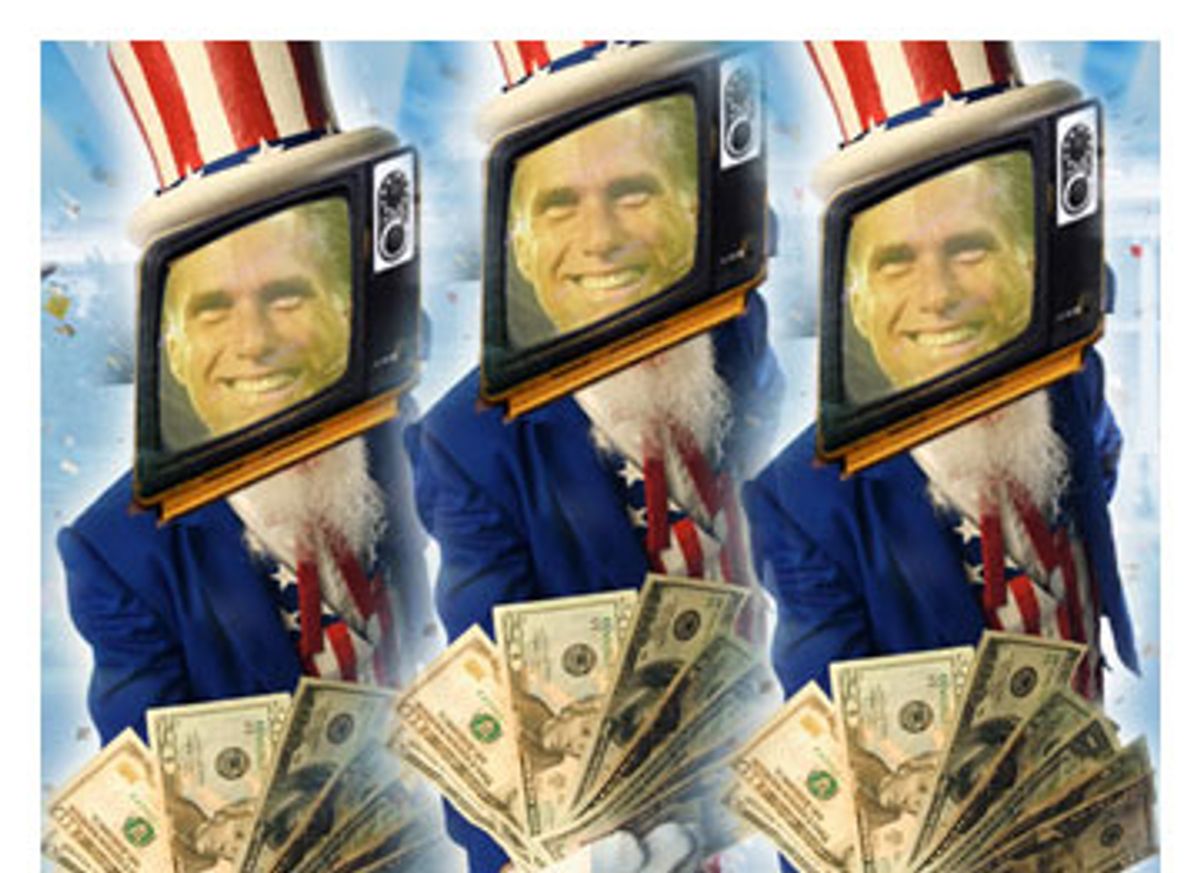 With a record-shattering $150 million already raised by the presidential candidates, the 2008 election cycle is shaping up to be a Gilded Age for the political class. Whoever wins the White House, an elite group of ad-makers, strategists, pollsters, direct-mail mavens and fundraising arrangers will share the spoils of victory and the just as lucrative swag of defeat.

All this brings us to a dirty little secret of politics -- the murky financial arrangements between the top consultants and the campaigns they serve. The Federal Election Commission does not require detailed breakdowns of consultant expenses from the candidates. And the campaigns refuse to voluntarily release this information. The result is that political givers end up knowing far less about how wisely their money was spent than if they had donated the cash to a charity.

Back in February, Mitt Romney was the first member of the Class of '08 to hit TV sets in the early primary and caucus states, with a 60-second biographical spot in which the former Massachusetts governor solemnly declared, "This is not a time for more talk and dithering in Washington. It's a time for action." When it came time to file its first-quarter reports with the FEC, which were due last week, the campaign dutifully chronicled more than $1.8 million in payments to National Media -- the Alexandria, Va., firm in which Romney media advisor Alex Castellanos is a partner.

But there is no way of knowing from the FEC report what portion of this money was used to purchase TV time, how much paid for production costs or how much went directly to Castellanos as a fee. To raise that $1.8 million required a minimum of 782 donors, since the maximum individual contribution for the primaries is $2,300. But what these political givers got for their money is considered confidential information by the Romney campaign.

"The disclosure that we have made to the FEC is what we will follow," said Kevin Madden, the national spokesman for the Romney campaign. "I have never heard at a staff meeting or heard from a donor any complaint about our [financial] arrangements with vendors. Folks hold the campaigns accountable by not giving more money or not giving at all."

Romney was the only candidate to report substantial first-quarter media spending -- and he's back on the air this week with a $1 million national cable buy. Madden's comments reflect the hush-hush code of politics among all major candidates in both parties. Romney's rival John McCain has been a longtime crusader for campaign reform. But McCain spokesman Matt David ruled out any disclosure that is not required by law, even though the campaign reported spending $645,000 on fundraising consultants. "We don't discuss internal campaign strategy," David said, "and that question falls into that category."

Despite the view of the McCain campaign, there is an obvious difference between revealing the compensation package for the media consultant and proprietary information like the extent of the TV buy in the Boston market in the week before the New Hampshire primary. There are, of course, genuine campaign secrets, but the pollster's profit margin does not have to be one of them.

The Democrats do not believe in transparency either. Phil Singer, speaking for Hillary Clinton, offered a flat no to a request to provide additional information about the campaign's contracts with its pollster and media consultant. According to its FEC report, the Clinton campaign owes $277,000 to its polling firm and another $155,000 to its ad-maker. Neither the Barack Obama nor the John Edwards campaigns responded to questions about whether they would release any further details about their major contracts.

Media firms, in particular, have long benefited from the no-questions-asked traditions of presidential campaign spending. Even sophisticated donors have little idea that ad-makers traditionally rake off anywhere from 5 to 15 percent of the media budget as their personal fees. Bob Shrum and his partners may have made as much as $6 million (plus reimbursement for production costs) as compensation for making easily forgettable ads for the 2004 John Kerry campaign. It's hard to believe, but the Bush campaign and the Republicans were more tight-fisted with their media consultants than the Democrats.

Wealthy political givers -- lobbyists, business executives and Wall Street power brokers -- may not worry unduly where their money is going since what they are mostly concerned about is their personal relationship with the candidate. But the rise of Internet fundraising has brought a new kind of donor onto the political stage: middle-class givers who might have to choose between sending $150 to a favored candidate or splurging on a Saturday night dinner. The Obama campaign boasted that it raised $6.9 million over the Internet from 50,000 donors with another $3.4 million coming in through direct mail and phone solicitations.

What are the obligations that campaigns like this owe their cause-oriented donors who may never meet the candidate nor even see him from afar at a rally? Is it enough to offer these true believers the shining city on a hill of a new administration in Washington? Are political consultants immune from external scrutiny simply because their hearts are pure or their candidates hold the right positions on the issues?

The creation of middle-class charities like the Community Chest after World War I brought with it the first sustained efforts to force do-gooder organizations to open their books to the public. Given how intense the 2008 presidential race has already become, this is likely to be the campaign cycle that further democratizes political giving. Donors have rights in politics -- if only they are willing to assert them. Otherwise, everything will be fair game in the presidential race, except who is getting rich from it.