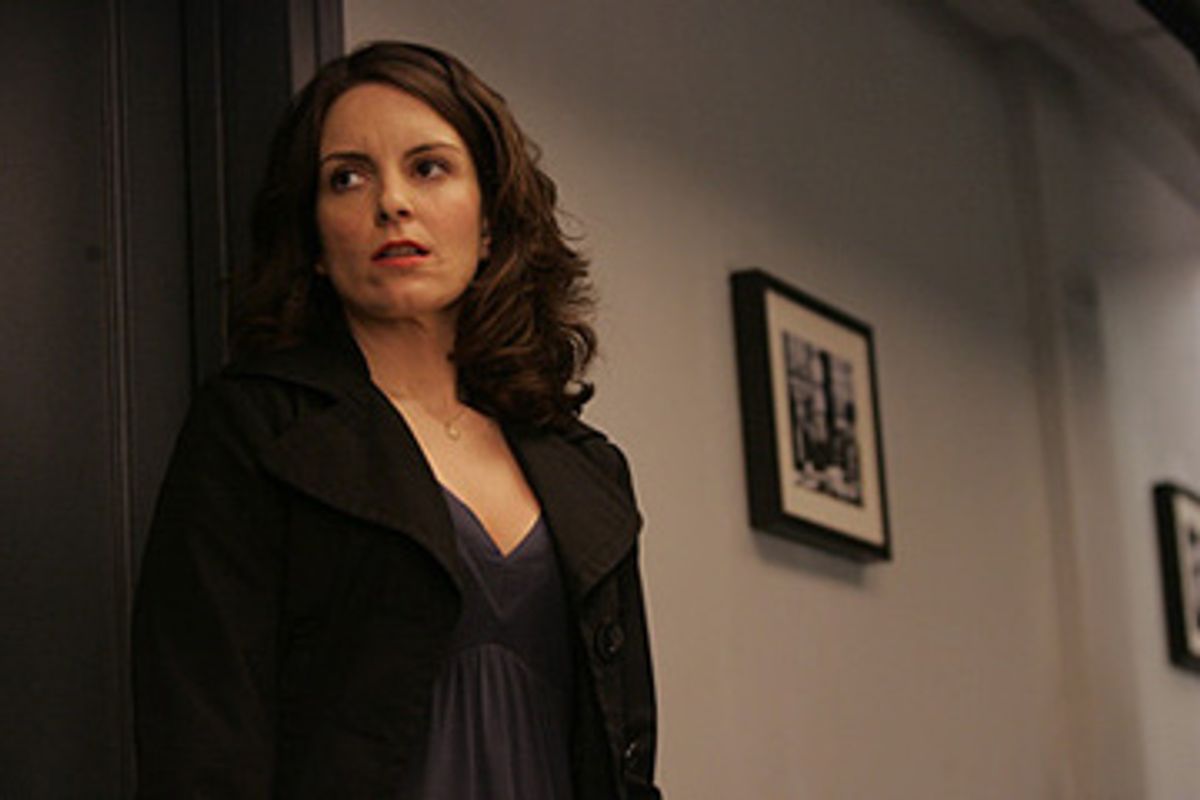 Remember back in September, when we wondered whether NBC could sustain a venerable late-night sketch comedy show and two fictionalized versions of the backstage doings at one? Then Aaron Sorkin's "Studio 60 on the Sunset Strip" proved to be as entertaining as the last half-hour of a midseason episode of "Saturday Night Live," while former "SNL" head writer Tina Fey's offering became the most entertainingly absurd, dysfunctional ensemble comedy since "Arrested Development."

What other show so wickedly exposes the entertainment industry as the glorified Dunder Mifflin it truly is? Tosses out carelessly scathing jibes at Ann Coulter and Brian Williams, and gives a central character a doomed love affair with Condoleezza Rice? Or serves as such a pungent post-Imus reminder that we are not in fact so p.c. we can't make abundant sport of gender and race -- it just helps to be really good at it?

This, after all, is the show that devoted a whole episode to its heroine's Elisabeth Kübler-Ross-like response to being called "the C-word," that anointed our third president a "jungle-fever haver." An equal-opportunity comic blowtorch, the series has also given us a gay Will Arnett in a shortie robe. Thrown in a character with a dubious relationship with prescription meds. Introduced a pugilistic Irish clan of con artists and possible sheep rapists. Then, for the mother of 21st century taboos, added a spectacular fireworks celebration that bears an unfortunate resemblance to a terrorist attack. "30 Rock" is the series that even dared to take on the "powerful bread lobby."

In the weeks leading up to the freshman season finale, the backstage world of the ersatz "Girlie Show" has been particularly chaotic. Hotheaded exec Jack Donaghy (played with smarmy brilliance by real-life hothead Alec Baldwin) has rushed into an engagement with delicate, unlikable English rose Phoebe (Emily Mortimer). The show's tart, bespectacled head writer, Liz Lemon (tart, bespectacled Fey), has been considering following her boyfriend to Cleveland, a wonderland of fresh scents, friendly cops and ZZ Top's car. And its erratic star Tracy Jordan (real-life erratic comic Tracy Morgan) has fled town, convinced he's incited the wrath of the "Black Crusaders," a stealth cabal of powerful African-Americans that includes Gordon from "Sesame Street."

Thursday night's episode was a rushed affair of loose-end tying. Jack, spurred by his toxic lifestyle and even more toxic mother, keels over in a cardiac episode that leads him to break off his engagement. Though Baldwin, mistaking his heart monitor for a stock ticker, was ticklish as ever, the abrupt dismissal of hollow-boned, plummy-accent-dropping, possibly nefarious Phoebe is a disappointment. Liz, meanwhile, has a technically challenging video call with her beau, leading to a mutual mistaken interpretation of the phrase "breaking up." Only Tracy's story line had a little more heft, thanks to Sean Hayes' devilish turn as the hillbilly cousin of pathologically chipper NBC page Kenneth (Jack McBrayer).

Harboring the fugitive Jordan in a town where nobody goes out at night "because of the wolves," Hayes deftly spins from eager simpleton to duct-tape-wielding, screenplay-brandishing Annie Wilkes wannabe, leaving Kenneth to rescue the star and save "The Girlie Show's" own season finale. As Tracy strides out on the stage in the nick of time to offend America as a gay black cowboy, Liz and Jack banter over life support, and both the show and the show within the show wind to a peaceful end. Not so much off-screen.

Although NBC has picked up the precariously low-rated series for a second season, Baldwin has recently made very public noises about wanting out, which would be the cruelest thing to happen to television fans since "Battlestar Galactica" appropriated Dylan. The network is insisting that Baldwin is a lock, but the low viewership, the actor's combustibility and costar Morgan's vehicular unreliability will make the next few months interminable for ardent fans. Because as it is now, NBC's whole Thursday night lineup stands as its greatest ever, a blissfully laugh-track-free oasis of oddball characters, rapid-fire jokes and surprising sucker punches of humanity. And at its center is "30 Rock," a show so good we want to take it behind the middle school and get it pregnant.