Democrats strike up the show

Obama promises not to nuke anyone, Hillary repents on healthcare, Biden puts Putin on notice, Gravel tees one up for Fox News, and more from the '08 curtain raiser. 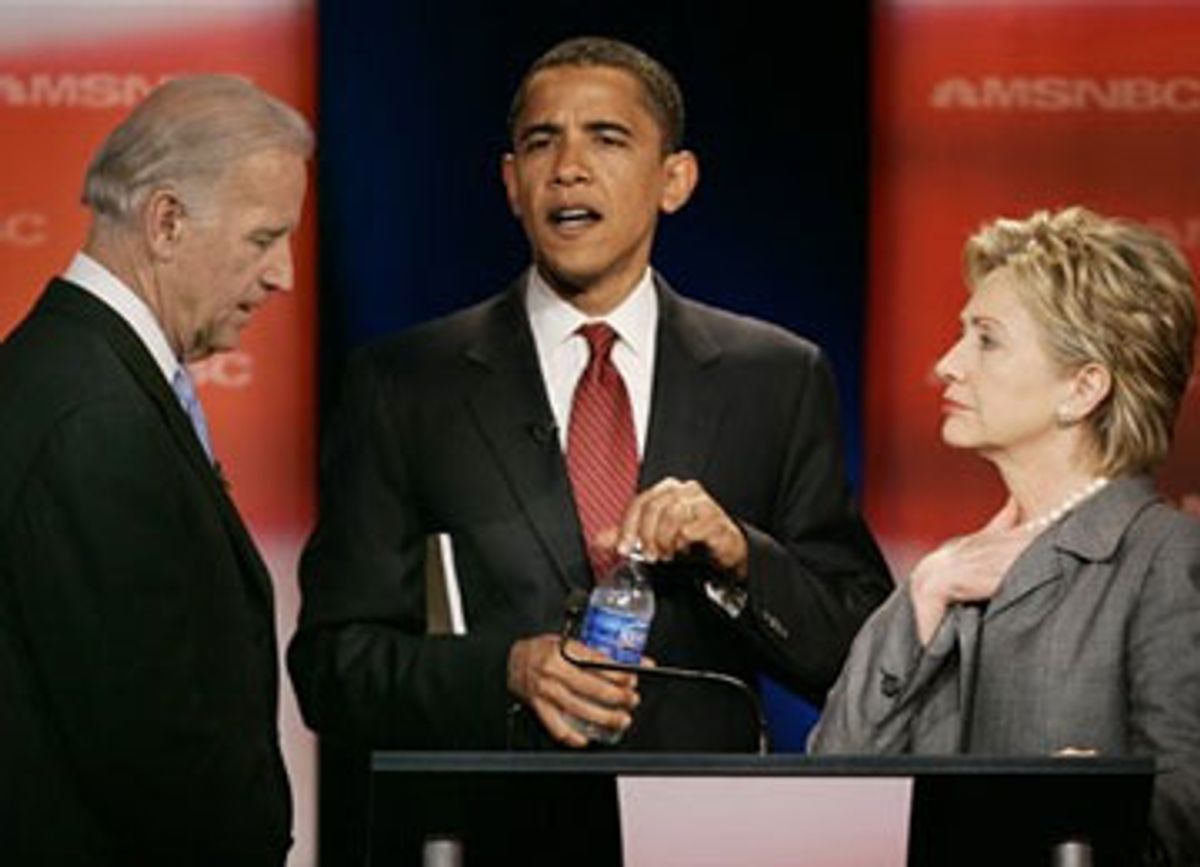 It was the overture in Orangeburg. The first presidential debate should be best thought of as a prelude offering melodies that will become familiar -- and maybe even haunting -- as the primaries near. But, despite the breathless dissections by the TV talking heads, Thursday night did little, if anything, to change the dynamics of the race, other than to reaffirm the uncharacteristic comfort level of the Democrats with their leading presidential contenders.

This is not just the jaded view from the press box. Amid the syncopated sound bites of the post-debate spin room, top advisors to all three leading candidates freely admitted as much -- as long as they were speaking privately. Whether they were officially burbling the praises of Hillary Clinton, Barack Obama or John Edwards, these spinmeisters would in their more candid moments use similar sentences like, "It didn't change anything."

The top three candidates all played to type. Clinton was solid, unflappable and at times engagingly rueful, saying in response to a question: "I don't have enough time to tell you all the mistakes I've made in the last many years." Edwards artfully brought almost every question back to his campaign themes, twisting a query about his $400 haircuts into the earnest declaration: "I live a privileged and blessed lifestyle now ... But it's not where I come from. And I've not forgotten where I come from."

As for Obama, he seemed at times constrained by the rigid one-minute response times, as if the rhetorical magic that has elevated him into the presidential pantheon would not work in the rat-a-tat framework of an eight-candidate debate. Only in the last 10 minutes did Obama come alive as he, bizarrely enough, found himself hectored on Iran by the two left-wing protest candidates onstage: Rep. Dennis Kucinich and Mike Gravel. When Gravel, a long-ago Alaska senator, began over-emoting, "Tell me, Barack, who do you want to nuke?" Obama replied to laughter, "I'm not planning to nuke anybody right now, Mike, I promise."

In normal presidential years, veteran Sens. Chris Dodd and Joe Biden, along with New Mexico Gov. Bill Richardson (first elected to Congress 25 years ago), would all be considered major candidates by dint of their résumés. But this year, they have not been able to dent the auras surrounding the super-nova candidates. So one of the motifs of Thursday night was whether any of the trailing trio would get a he-deserves-a-second-look moment.

Few would have guessed that it would be Biden, almost forgotten since his ill-advised description of Obama as "clean" and "articulate" marred his campaign kickoff in January. Referring to Biden's penchant for gaffe-filled logorrhea, moderator Brian Williams bluntly asked the chairman of the Senate Foreign Relations Committee, "Can you reassure voters in this country that you would have the discipline you would need on the world stage, Senator?"

Biden immediately responded, "Yes," and then with a puckish smile silently stood behind his lectern as the seconds ticked off and the hilarity grew. Biden's mastery of the sounds of silence brought to mind the old Jack Benny radio routine when the legendarily cheap comedian was asked by an armed robber, "Your money or your life." After 30 seconds of dead air, Benny finally said, "I'm thinking, I'm thinking."

Biden, who has raised only a paltry $4 million for his campaign, also demonstrated his substantive credentials, especially on foreign policy. Asked about the major international threats facing America, Biden departed from the expected answers (North Korea, Iran) to single out Russia, noting that "the tendency of Putin to move in a totalitarian direction, which would unhinge all that's going on positively in Europe." But a rapid-fire debate, which also featured raise-your-hands questions, was not the ideal setting for thoughtful policy analysis.

The answers to one of those yes-no questions are apt to be the subject of press releases from the Republican National Committee and the National Rifle Association. When Williams asked all eight candidates if they had ever lived in a home where someone had a gun, only the front-runners -- Clinton, Obama and Edwards -- admitted living a completely firearms-free existence. Another potential GOP talking point may revolve around the absence of any references to religion, beyond Edwards' confiding in response to a question about moral leadership, "My Lord is important to me. I go to Him in prayer every day and ask for both forgiveness and counsel."

There will come a time during this campaign when debates are -- or at least theoretically should be -- about substance rather than sound bites. But almost nine months before the opening-gun Iowa caucuses, there should have been limited expectations of probing insights into political philosophy. With the conspicuous exception of Edwards, none of the major candidates have, for example, yet unveiled their detailed healthcare plans. The same is true of their energy plans and their budget proposals.

As a result, Thursday night was rough-sketch time. Clinton harked back several times to her failed effort to provide healthcare coverage for all Americans, half-boasting, "I tried to achieve universal healthcare back in '93 or '94, and I still have the scars from that experience." That memory prompted the former first lady to declare, "I believe that America is now ready for universal health care ... It is ready to deal with global climate change."

It is difficult to imagine that any Democrat on the stage at South Carolina State University could possibly dissent from these feel-good sentiments. In fact, most of the ideological dissent came from Richardson, who played up his moderate Western credentials by unabashedly acknowledging his support from the NRA and provocatively arguing, "As Democrats, I just hope that we always don't think of new taxes to pay for programs."

If there was a mystery surrounding the debate, it was Gravel's presence on the stage. The Democratic Party may pride itself on diversity, but there has never been a political affirmative action program for nearly forgotten white septuagenarian former senators from Alaska. Having raised just $15,000 for his campaign (presumably from bake sales), Gravel has no hope and no constituency, since the far-left flank has long been occupied by Kucinich. Instead, he must have lifted the hearts of Republicans everywhere when he said about his rivals, "After standing up with them, some of these people frighten me." The subject may have been Iraq, but it is likely that the context will be lost as the clip runs regularly on Fox News over the next year.

In theory, the Democrats might have welcomed Gravel as the eighth candidate in order to avoid the familiar fairy-tale putdown of the field as the seven dwarfs. Though with Hillary Clinton onstage, the description might have just as easily been Snow White and her seven small-statured companions.

But judging from opening night in Orangeburg, the Democrats have no need to worry about how their presidential field (minus Gravel) might be viewed. Maybe the biggest story from the debate is simply that this is shaping up as an uplifting election year for Democrats -- and we have only seen the curtain raiser.