A movie about the Bush-Cheney policy of torture that will make you shake with rage. Plus: Alec Baldwin's unintended laugh lines. 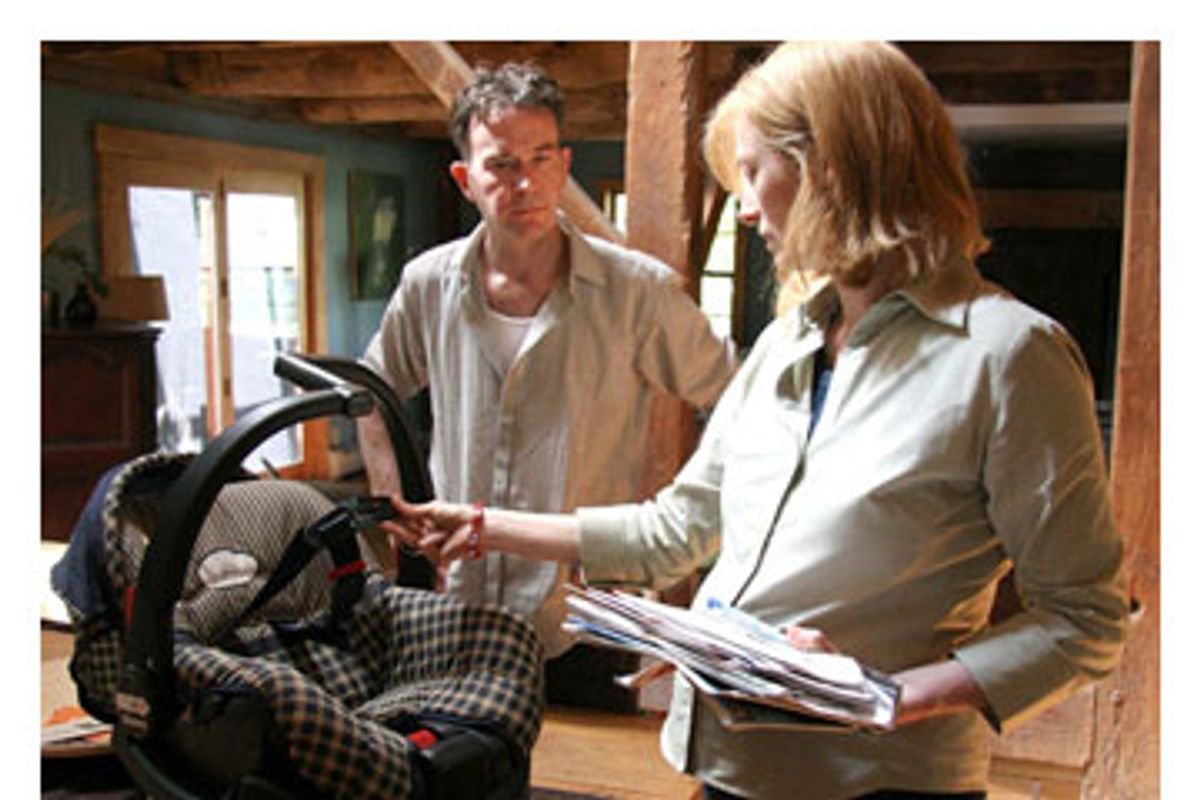 We'll get to the really important news from the Tribeca Film Festival shortly (i.e., Baldwin, Alec; inadvertently humorous dialogue spoken by). But first some lighter fare: Exactly how and when did the United States of America become a police state?

Even Alex Gibney's elegant and terrifying documentary "Taxi to the Dark Side" can't exactly answer that question. But it sure gives some clues. After the explosive Saturday night premiere of this film, which offers a thoroughly researched history lesson on the recent development of torture as U.S. policy, from the Afghanistan invasion through Abu Ghraib and Guantánamo, I stumbled out into a mild spring night on West 23rd Street feeling as if I needed to vomit. When an audience member asked Gibney, during the post-screening Q&A, about his hopes for the film, the director replied, "I hope it provokes some rage." Well, it worked on me.

In the long haul, you hope that this movie's account of how the Bush-Cheney administration has eviscerated the Constitution, and abandoned basic tenets of human rights and human dignity, provokes some constructive rage. But right there on the sidewalk, my rage was not constructive. I wanted to get stinking drunk in some dead-end bar (not the actual ones available on 23rd Street, where the drinks come in funny colors and cost $14) and scream at strangers, tell them that if this country had any fucking stones we would drag these people out of Washington, strip them of their citizenship and their clothes, and drive them white-baby naked across the Rio Grande to fend for themselves in the Sonora desert.

It's not that there's any truly startling new information in "Taxi to the Dark Side." Gibney makes clear how much of his film rests on the reporting of Carlotta Gall and Tim Golden of the New York Times, among various others. If you've been reading the best investigative reporting on the subject since the Abu Ghraib scandal first broke, in fact, you've gotten the main points already: The abuse and beatings and torture and murder (yes, murder) of detainees in U.S. custody have not been the result of a few undisciplined "bad apples" in the military. Rather, they have resulted from a deliberately murky policy set at the Defense Department and in the White House, whose true goals are to claim far-reaching, extra-constitutional powers for the president; to establish that Muslim detainees from other countries have no inherent human rights or legal rights at all; and to condition the American people to the belief that torture will stop terrorism, and that to think otherwise is to be a pantywaist Osama lover.

As he did in his influential "Enron: The Smartest Guys in the Room," Gibney illustrates the news in compelling human detail, and broadens and deepens both the reporting and the argumentation. He coaxes several former Abu Ghraib interrogators and military police to speak on camera, and there are photographs and grainy video images -- some of them pretty hard to take -- that haven't been seen by the public before. Among his interviewees are many of the star figures in this sordid drama: British-born detainee Moazzam Begg, who spent almost three years in U.S. custody; Damien Corsetti, a hulking former Army intelligence specialist who served both at Abu Ghraib and at Bagram Air Base in Afghanistan; and Alberto Mora, former general counsel to the Navy and the Bush administration's leading legal whistle-blower on these issues.

Furthermore, Gibney makes movies. It would be discordant on various levels to call "Taxi to the Dark Side" an entertainment, but it's certainly an artful construction of many different visual and sonic elements, which moves from a personal, intimate focus to a more global and historical view and then back again. His title itself connects two people widely separated by power and geography, but linked by history. The first is an Afghan taxi driver named Dilawar, a peasant from a penniless and illiterate rural family who was killed by U.S. soldiers after being detained at Bagram in December 2002. His death was the first certified homicide of a detainee in U.S. custody, or at least the first to get anybody's attention. (There have been at least 36 more since then, Gibney says, not including controversial, ambiguous or unresolved cases.)

Gibney suggests that Dilawar's death, and all the "harsh treatment" -- still profoundly upsetting, when you see it all again -- that followed at Bagram and Abu Ghraib and Guantánamo and other places whose names we don't know, grew out of Dick Cheney's famous pronouncement shortly after 9/11 that in order to fight the war against terrorism, "we have to work the dark side." Some might argue that Cheney has never worked on any other side, but the ramifications of his argument go beyond personal evil.

With the tide of public opinion running strongly against the Bush administration on so many issues, it seems likely that the next president, whether Republican or Democratic, will seek to dissociate himself (or herself) from the Bush-Cheney mode of autocratic secrecy. But if we've already swallowed the central Bushian premise that anything goes in the so-called war against so-called terror, that the president has limitless power to decide who our enemies are and how they will be treated, and that all that high-sounding language in the Constitution and Declaration of Independence is full of asterisks and loopholes when it comes to Dilawar from Whereveristan -- well, then we'll have lost something much bigger than an election.

Gibney never pretends that his work is apolitical or neutral in tone. This is a contentious and angry film, designed to drag one of the most pressing and distressing issues facing this country before the widest possible audience. (Sidney Blumenthal, a Salon columnist and former editor, was one of the film's executive producers, but Salon itself was not involved.) I can only hope that right-wingers spend as much time attacking and debunking "Taxi to the Dark Side" as they did "Fahrenheit 9/11"; that would mean that it has found something like the attention it deserves.

As I've complained repeatedly in this space, Americans don't seem interested in films about the Iraq conflict. This one may be an exception, because "Taxi to the Dark Side" is not after all about America at war in Iraq or Afghanistan but America at war with itself; it's about what we have done (or at least allowed to be done in our name), why we should be ashamed and angry, and whether we have the honor and decency to stop it. If America still has a soul, Alex Gibney is trying to save it. ("Taxi to the Dark Side" has no distribution in place at the moment; stay tuned for more news.)

Moving from the soul of America to the soul of Alec Baldwin, we come to Marc Klein's directing debut, "Suburban Girl," adapted from Melissa Bank's chick-lit classic, "The Girls' Guide to Hunting and Fishing." To absolutely no one's surprise, Baldwin didn't show on Friday night for the premiere of this uneven but pleasantly acrid romantic comedy, in which he stars opposite Sarah Michelle Gellar. Before the film started, Klein was clearly nervous about the possibility that his entire movie was about to become a tabloid footnote. "Anything I say here is likely to end up on Page Six," he told the audience, thanking Baldwin in absentia for his willingness "to go somewhere very personal" in the role of Archie Knox, a 50-ish New York publishing lion who romances Brett (Gellar), a junior editor half his age.

Personal how? Does Alec, like the sleazy but oddly appealing Archie, like 'em ever younger? Not quite -- Klein was preparing us for the film's series of unfortunate laugh lines. (She: "Did you call your daughter?" He: "I left her a message.") You see, Archie the character has an embittered ex-wife and an estranged daughter who doesn't talk to him, and he feels as if he's probably a crappy father. I don't imagine this material was meant to be funny, and when we weren't all howling at the cosmic synchronicities, "Suburban Girl" tasted like a moderately sophisticated, not-too-sweet cocktail.

If the coupling of Baldwin and Gellar seems startling at first, it's meant to be. Baldwin actually does take the dry, self-mocking manner of his recent career into more dangerous territory; Archie is a frustrated author, a supercilious drunk and an incurable philanderer. Since he's Alec Baldwin, he's also a calming and charming presence, and we can see why straightforward, ambitious Brett is intrigued by everything he represents. The film is visually undistinguished but played with delicacy by both actors, and the chemistry that eventually develops between the young striver and the aging Lothario leads to some surprisingly affecting moments.

Another oddly spicy romantic pairing appears in the enjoyable low-budget black comedy "You Kill Me," by John Dahl, director of "Rounders," "The Last Seduction" and various other off-kilter genre movies. Ben Kingsley plays Frank, a monosyllabic Polish-American hit man from Buffalo, N.Y., whose boss (Philip Baker Hall) ships him to San Francisco to get him off the bottle. Not exactly the city I would choose for that purpose, but never mind. Frank hooks up with Lauren (hilarious work from Téa Leoni), an acid-tongued saleslady he meets at a funeral parlor, and befriends Tom (Luke Wilson), a gay Alcoholics Anonymous sponsor who collects tolls on the Golden Gate Bridge.

"You Kill Me" is defiantly inappropriate, totally unapologetic about it, and pretty much fake in what I assume to be deliberate and self-aware fashion. (Virtually the whole film was shot in Winnipeg, Manitoba, which does not resemble either Buffalo or San Francisco.) I'd need a Buffalonian to judge the authenticity of Kingsley's accent here, but Frank is such an uncommunicative guy the role is more about his oddly frozen body language than his accent. There's no psychological back story about Frank or Lauren whatever, no monologues about their childhoods or previous bad marriages. When Lauren and Tom figure out what Frank's job is back home, it's no big deal. He teaches Lauren to kill, using a watermelon and a kitchen knife, in what would be the intimate ballroom-dancing scene of an ordinary love story. I guess when your older boyfriend is a hit man, you come away from the relationship with some real-world skills.