George Tenet, spook for all seasons

The former CIA chief seems strangely oblivious that his self-serving defense is shredding the remains of his reputation. 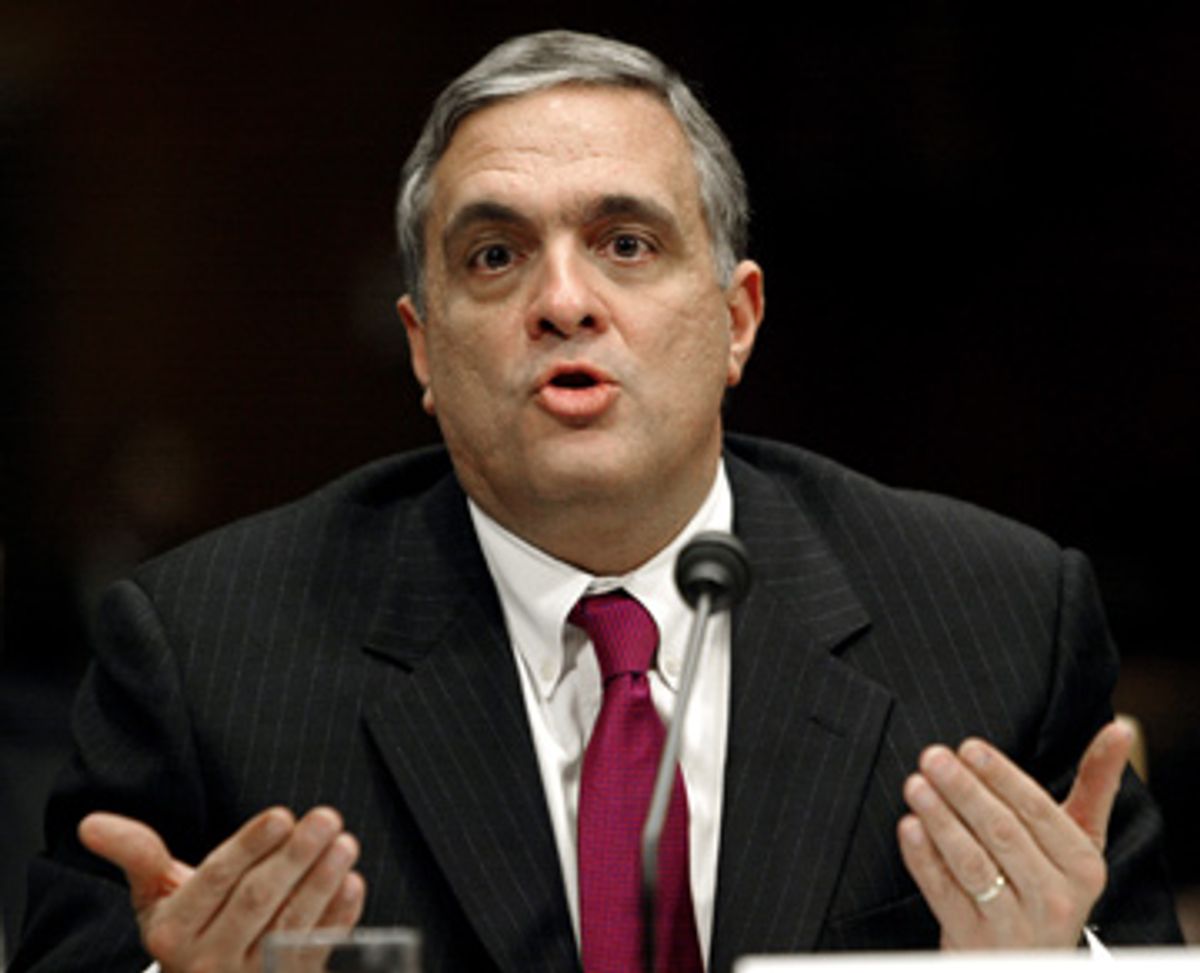 If former CIA director George Tenet's "At the Center of the Storm" were an intelligence operation, it would have to be assessed as achieving precisely the opposite of the results intended. Tenet hoped that his elaborate apology for his government service would cast him as honest, prudent and professional; his admission of his own mistakes would shine a light on his integrity; his disclosures of the machinations of Vice President Dick Cheney and the neoconservative cabal would show him as a truth teller; and his refusal to say nary a bad word about President Bush would demonstrate his respect for the presidency.

But Tenet's sketchy book, devastating in patches, is glaringly misleading about many decisive events in which he played an important role. By depicting himself as a spook for all seasons, moreover, he has simply exposed himself as a self-serving poseur. Tenet, after all, never served as an intelligence agent and was never posted overseas. For years he was the staff director of the Senate Select Intelligence Committee, until then CIA director John Deutch chose him as deputy director, in great part on the strength of his congressional ties. When Deutch self-immolated for downloading classified files onto his personal computer, Tenet was promoted by President Clinton to the directorship and retained by President Bush, who seemed to appreciate his chameleon-like quality of adapting to any environment.

Despite this résumé as a consummate bureaucratic player, Tenet has shown himself to be politically impaired. He appears unable to perceive what he has done or what he is doing. He has only the dimmest sense of the moment into which he has inserted himself. Rather than being hailed for bravery, he finds himself in a hail of fire. He seems strangely oblivious that his supposed self-defense is shredding the remains of his reputation. His promotional performances on TV reveal an angry man careening out of emotional control, attempting to deflect difficult questions by demanding deference to his departed and tarnished authority. "Now you see what we've had to deal with," a former high CIA official told me. "And I like George."

Tenet's version of his notorious statement assuring the president that the intelligence reports that Saddam Hussein possessed weapons of mass destruction were a "slam-dunk" may clarify the historical record, but his account only reveals his poor judgment. In an Oval Office meeting on Dec. 21, 2002, Tenet did not use the phrase as Bob Woodward reported in his book "Plan of Attack" but, as he tells it, "Instead, I told the president that strengthening the public presentation was a 'slam dunk.'" If true, Tenet is confessing that as director of the CIA he engaged in freewheeling political strategy meetings on the propaganda campaign to the American public to sell them the Iraq war, skirting close to the edge of violating the CIA's charter against involvement in domestic affairs. Unaware of the egregious inappropriateness of his revelation, Tenet is consumed with rage against the source that "later described the scene to Bob Woodward," making him the scapegoat for bad intelligence. "It's the most despicable thing that ever happened to me," Tenet said on CBS's "60 Minutes." But he is blind that his alternative account is equally undermining.

In his TV appearances, Tenet proclaims his devotion to the professionalism of the men and women of the agency he once headed, but his book depicts him as feckless in defending them from the intimidation of Cheney and the neoconservatives. He acknowledges that Cheney and his former chief of staff, I. Lewis "Scooter" Libby, frequently turned up at the Langley, Va., headquarters to browbeat analysts into accepting their disinformation that there were direct links between Saddam and al-Qaida. Tenet describes how analysts, in response to the pressure, produced a study, "Iraq and al-Qa'ida: Interpreting a Murky Relationship," which "made clear that there were no conclusive signs between Iraq and al-Qa'ida with regard to terrorist operations" but indicated there were signs "to at least require us to be very concerned." In fact, there were no such ties, and the "murky" conclusion was a middle ground between the utter absence of any solid evidence and the falsehoods that Cheney & Co. were pushing. Libby and then Deputy Secretary of Defense Paul Wolfowitz rejected the paper out of hand.

Trying to produce a more "comprehensive paper," the parallel intelligence operation at the Pentagon, the Office of Special Plans, set up to counter the CIA's vetting process, was churning disinformation straight into the White House. Tenet attended a meeting for one of its slide show presentations on Aug. 15, 2002, "Iraq and al-Qa'ida -- Making the Case." "It is an open-and-shut case," said a member of the Pentagon team. "No further analysis is required."

Tenet never confronted Cheney or Secretary of Defense Donald Rumsfeld. While Tenet was eager to offer his opinion to the president on political propaganda -- "slam-dunk" -- he never told him of the attack on the integrity of the intelligence process. Tenet never shielded his analysts from Libby. His passivity fed the momentum of the neocons. Then he lent his weight to the National Intelligence Estimate on WMD, presented to Congress only days before it voted in October 2002 on the Authorization for Use of Military Force Against Iraq: "Baghdad has chemical and biological weapons as well as missiles with ranges in excess of UN restrictions; if left unchecked, it probably will have a nuclear weapon during this decade." Tenet admits now that the conclusions of the NIE were "not facts and should not have been so characterized." Nonetheless, he briefed members of Congress at the time that they were indeed facts. Even Democratic senators who voted against the authorization in their floor speeches gave credence to the supposedly indisputable fact that Saddam had WMD.

Tenet confesses that he believed the information from an Iraqi source called "Curve Ball." Only later, he claims, did he learn that Curve Ball was a complete fraud. But Tyler Drumheller, former chief of CIA operations in Europe, has emerged to brand Tenet's account as false. In fact, says Drumheller, he had communicated the reports from German intelligence that Curve Ball was a fabricator, and in November and December 2002 debated the issue inside the agency. (Drumheller's version appears in his recent book, "On the Brink: An Insider's Account of How the White House Compromised American Intelligence.") But Tenet brushed off those serious concerns and approved disinformation based on Curve Ball that served as the heart of Secretary of State Colin Powell's Feb. 5, 2003, speech to the United Nations Security Council. Tenet now writes, "It was a great presentation, but unfortunately the substance didn't hold up." One principal reason it did not is that Tenet had carefully failed to perform his due diligence, all the while assuring Powell that he had.

Tenet's account of the July 20, 2002, meeting of CIA officials and British intelligence officers in Washington is also misleading, according to a former high CIA official with firsthand knowledge, who described it to me as "total bullshit." That meeting was important as the basis of the subsequent briefing of Prime Minister Tony Blair that took place at Downing Street three days later, summarized in the famous so-called Downing Street memo. In the memo, Sir Richard Dearlove, chief of MI6, is quoted: "Military action was now seen as inevitable ... Bush wanted to remove Saddam, through military action, justified by the conjunction of terrorism and WMD." Even more ominously, Dearlove warned that "the intelligence and facts were being fixed around the policy."

Tenet writes that Dearlove told him he was misquoted and that Tenet "corrected it to reflect the truth of the matter." "Tenet doesn't say what the truth of the matter is," the former CIA officer told me. "Dearlove just didn't want to be blamed." Dearlove, the former CIA official emphatically insists, claiming direct knowledge, was accurately relating what Tenet had personally told him.

The former CIA official explains that the Washington meeting was an annual U.S.-U.K. event, usually held in Bermuda. But in 2002, as the drums of war were beating, Tenet wanted to blow off the British. British intelligence officials threatened that if they were not briefed with the latest material, they would have Blair call Bush and force the meeting to happen. Still, Cofer Black, the State Department chief of counterterrorism, tried to block it. The overwhelming factor working in the Brits' favor was the figure of Blair. "They could deliver Tony Blair, and he was important as the one major international figure who supported Bush and was popular with the American public," the former official told me. So the meeting was held at Langley. After a daylong briefing in the director's conference room and private dining room, Tenet took Dearlove into his office. According to the CIA source, "That's where Dearlove asked where the intelligence was going, was it heading to war, did it matter what the intelligence was. Tenet said, that's the way things are heading, they are looking for intelligence to fit into this." Dearlove's "fix" was simply the British version of "fit." He was not misquoted; he was spot on.

In his interview with "60 Minutes," Tenet echoed Bush's refrain, "We do not torture." Tenet used the word like the Red Queen in "Alice in Wonderland." It means whatever he says it means. Torture becomes "not torture" by saying so.

Tenet has written his book as an act of self-exculpation to distance himself from Cheney & Co. But the controversies he has revisited entangle him even deeper in the making of the false case for war. His book underlines his failure to protect his agency. And in his hollow defense of torture he has lashed himself to Bush and Cheney.