At the Reagan Library, the GOP's 2008 contenders compete for the Gipper's mantle -- and for the title of Most Macho. 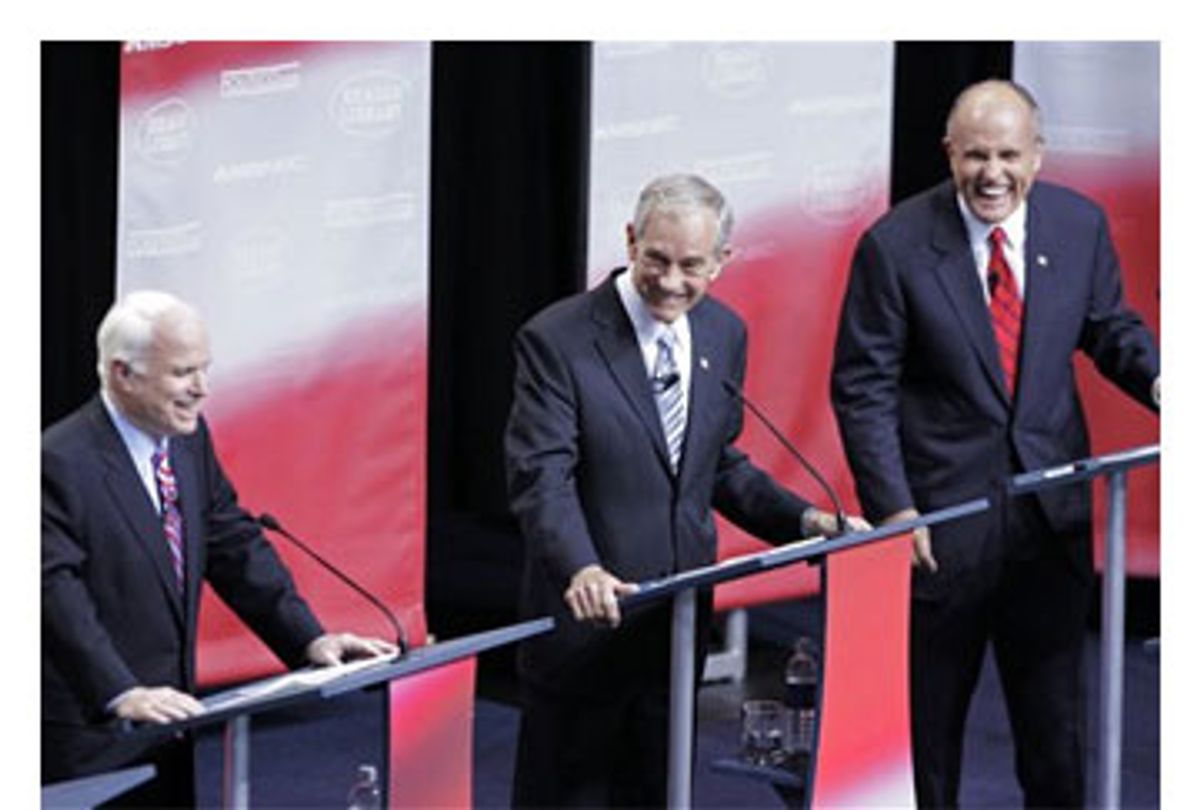 Ten Republican men gathered on a stage Thursday night to pound their chests. Each of them looked tough. Each talked tough. Each tried to be the alpha dog, the real-deal decider, the next Ronald Reagan.

"Ronald Reagan was a president of strength," said former Massachusetts Gov. Mitt Romney, looking tall, tan and strong. "His philosophy was a philosophy of strength: a strong military, a strong economy and strong families."

"We should never retreat in the face of terrorism," said former New York Mayor Rudy Giuliani, with a prosecutor's voice and a gleaming forehead.

Arizona Sen. John McCain, the current front-runner, came out like a chained dog, pointing at the camera to punctuate his points. "We will do whatever is necessary," he said of terrorist-at-large Osama bin Laden. "We will bring him to justice, and I will follow him to the gates of hell."

It was hard to miss the point. Republicans have a different code than Democrats. Liberals elect leaders with finesse and style, men or women who can inspire, who can seek out the truth and lead the nation there. When the Democratic presidential candidates debated last week, the front-runners were modest and reasonable and calm. Republicans, on the other hand, elect father figures, men who will never flinch and will always lay down the law. The candidates came out swinging.

Eight years ago, President George W. Bush looked as though he would pass this test. But he turned out to be a ninny. He led the conservative movement into a period of decadence and decline. He revealed the limits of American power by sending the nation into a losing foreign war. So the Grand Old Party has reached back to the past, to Ronald Reagan, the great California cowboy who never sweated the details. The Republican primary has become, in many ways, a fatherhood audition. Only a man's man will save us.

Find someone as macho as Reagan, Giuliani suggested, and America's enemies will fold in fear. "He has to look at an American president and he has to see Ronald Reagan," Giuliani said of the president of Iran, Mahmoud Ahmadinejad. "Remember, they looked in Ronald Reagan's eyes, and in two minutes, they released the hostages." Of course, that is not what happened in Iran in 1981. But it doesn't matter. Republicans believe in their guts that Reagan's swagger released the hostages, grew the economy, and won the Cold War.

For their first debate, Democrats traveled to an all-black college in South Carolina, where they were greeted by the vibrant gyrations of a step marching band. It was a place of the people, noisy, confusing, teeming with humanity. Republicans, by contrast, chose the Ronald Reagan Presidential Library, a stucco-sided monument to masculinity. The public was not permitted past the front gate. Protesters had to rent a prop plane, which circled overhead, dragging a banner that read, "McCain Mission Accomplished?"

In the hills north of Hollywood, the library is a two-martini blast from the Cold War past, an homage to a time when men hated communists and pretended to rope cattle. An F-14 Tomcat, the fighter jet from "Top Gun," sat parked outside the pavilion. Inside, the audience sat beneath the traveling phallus of American power, Reagan's retired Air Force One, propped at a slight incline, "creating the feeling that it is taking off on another important mission," according to the library guide.

With about eight months left before the first vote, the crowded Republican field has begun to divide itself. McCain, the Vietnam war hero, is the clear front-runner, ahead in the Iowa, New Hampshire and South Carolina polls, with a substantial campaign organization on the ground. Romney trails McCain in name recognition, but looks to have the most potential for growth, in both fundraising and style. He is the most polished on television and the most pandering to the party's base. But his demon is also his strength. He can come off as too perfect, too polished, phony. He couldn't pull off a cowboy hat, and he has never really handled a gun.

Giuliani continues to poll well nationally, but land mines await. In perhaps the most jarring moment of the debate, the candidates called one-by-one for the reversal of Roe v. Wade, which guarantees women the option of abortion. Then the question got to Giuliani. "It would be OK," he said of reversing Roe, heretically noncommittal. Later he used the language of Democrats. "I would respect a woman's right" to an abortion, he said.

In the spin room, Giuliani's own pollster, Ed Goeas, estimated that about one in five Republican primary voters will not support a pro-choice candidate. His senior advisor, Jim Dyke, acknowledged that a Giuliani victory could redefine the party. "It might mean a change in the perception of the party, certainly," he said. All this places a heavy burden on the former New York mayor. For him to win, he will have to change the politics of abortion as we know it. He will have to revamp the GOP. A trick like that could make winning in Iraq look easy.

The minor Republican candidates face an increasingly difficult road. Former Arkansas Gov. Mike Huckabee continues to run the most rhetorically trenchant campaign but can't seem to get any real traction. At one point he charged that President Bush listened too much to "civilians in suits and silk ties" and not enough "to the generals with mud and blood on their boots and medals on their chest." But alliteration matters more among Democrats than Republicans. And Huckabee, who has neither Romney's square jaw nor McCain's military past, has not yet been able to raise any real money.

Kansas Sen. Sam Brownback came across as earnest but forgettable, with true conviction that can overshadow his charisma. "I believe that every human life at every phase is unique, is beautiful, is a child of a loving God, period," he said. And there was no doubt that he truly meant it. But that alone was not enough to mount the Reagan pedestal.

The other candidates -- former Virginia Gov. Jim Gilmore, California Rep. Duncan Hunter, former Wisconsin Gov. Tommy Thompson, Texas Rep. Ron Paul and Colorado Rep. Tom Tancredo -- ran the spectrum from single-issue gadflies to well-bred also-rans. They all brought something to the table, but ultimately failed the alpha-male test. At one point in the debate, Hunter, a lifelong military booster, tried to ride the coattails of McCain to up his own machismo. "John's not the only guy with a defense background," he said. "I've been chairman of the Armed Services Committee for the last four years. I've helped to rebuild national defense." It was not enough.

Tancredo, an immigration gadfly, stood at the right end of the stage, folding his arms, as he was ignored by the moderators from MSNBC and Politico.com. Fifteen minutes passed before he got a word in. His trademark topic was not mentioned much. At one point he had to change the topic, just to get immigration on the table. "There are issues that I believe have not been addressed tonight, not in full, and I believe that they do separate us," he said.

About 15 minutes before the cameras started rolling, the candidates came out on the stage. They faced an audience of several hundred, divided into three sections, each one named for the site of a Reagan summit with the Soviets. The network executives sat in Moscow. The journalists and VIPs sat in Reykjavik. Most of the candidate families and friends sat in Geneva.

MSNBC's Chris Matthews, the moderator of the debate, gave some opening remarks and then abandoned the candidates to wait. They stood awkward and nervous, unsure what to do. One of the cameramen spoke into his headset about the sweat beading on Giuliani's forehead. "How about George giving Rudy a napkin or something, anything?" the cameraman said.

But no napkin arrived. The Republican field was on its own. It was make or break time, the end of the beginning of the campaign season. They had to take a deep breath and face the cameras like the men they wanted so much to be.