Rosie O'Donnell has made her mark on "The View." Now that she's leaving, who should step in to take her place? 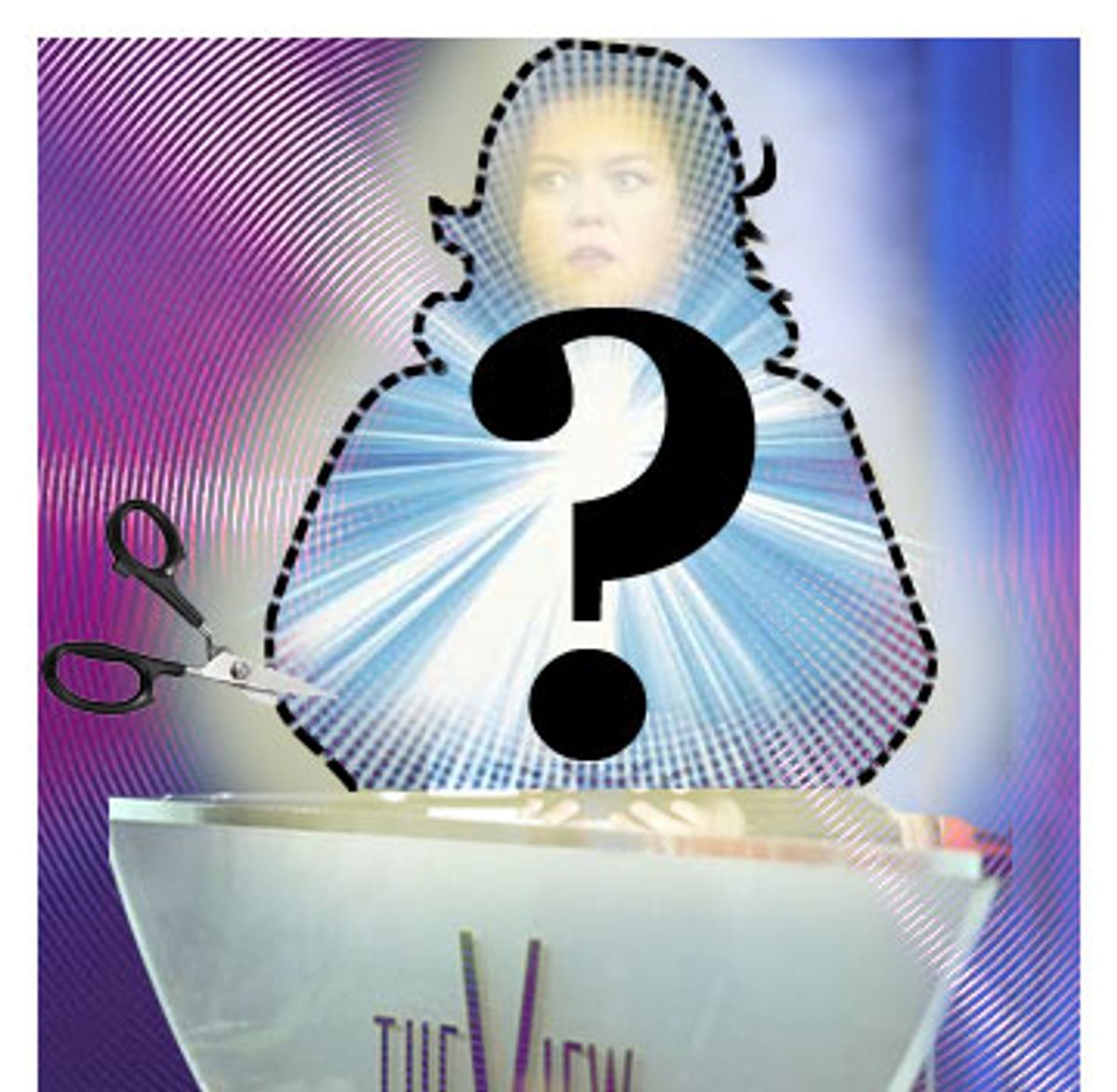 Ever since word got out that Rosie O'Donnell will be leaving "The View" next month, speculation has been rampant. Who in the world could fill that Rosie-shaped void? Gossip columnists are buzzing about Roseanne Barr and Whoopie Goldberg as possible contenders, but we at Salon have some other great candidates for consideration. Take a look at our nominations -- and use the letters to tell us your picks!

Whether playing angry dad/divorced guy from the famous voice mail, a version of Jack Donaghy, or the male Rosie role, the loudmouthed lefty with a sense of humor (and a bit more charm) -- Alec Baldwin would be just great. He'd boost ratings, keep a lid on Elisabeth Hasselbeck, and it would be better therapy for him than he'd get from Dr. Phil.

If she could be lured away from "Desperate Housewives" gold, Felicity Huffman would be a great candidate to replace Rosie O'Donnell. Huffman is smart, funny and charismatic, she loves women, she's very amicable and chatty, but she's also not afraid to get mean -- a requirement, when you're dealing with the doe-eyed blinking innocence of conservative wolf-in-sheep's-clothing Elisabeth Hasselbeck. Who else to put Elisabeth in her holier-than-thou place than the woman who's decried the "fucking candy-coated version of motherhood" that most Americans embrace? Imagine, a morning talk show host who's not afraid to state openly that parenting isn't all butterflies and moonbeams and fairy tales! Half of the housewives watching would be out for blood, the other half would declare her their personal Lord and Savior. But as Rosie knows all too well, to win high ratings, you have to be a divider, not a uniter.

If you want to fill the Starr Jones memorial hot seat, you need to be intelligent, personable and socially aware. It additionally helps to be argumentative, prone to lapses of professional and personal judgment, and widely despised. That's why Hillary Clinton would be perfect. Nestled at the table between Joy and Elizabeth, she'd have a position of influence, much more fun than she possibly could with the Supreme Court, and a breezy commute from Chappaqua, N.Y. Plus, she may have some time on her hands coming soon.

To fill Rosie's shoes adequately, "The View" needs someone brazen and slightly reckless, yet likable enough that you wouldn't mind having her as your imaginary best friend. Wanda Sykes fits the bill perfectly: In recent years she's made a fine career out of playing the sassy-verging-on-obnoxious sidekick (or should I say side-chick?) on "Curb Your Enthusiasm" and "The New Adventures of Old Christine," and as a stand-up comedian, she'd have no problem ad-libbing on the key issues of the day. Plus, she'd single-handedly integrate the whitest show on morning TV.

She once had her own talk show, and she doesn't know the meaning of "don't go there." She goes there, whether it's telling you how she slept with all the men on "Taxi" except Danny DeVito -- because he didn't ask -- or celebrating the buoyancy of her own poop. She is guaranteed to make Elisabeth Hasselbeck blush, but she'll never make her cry.

If they're looking for a batshit-insane brilliant person, I can think of no one more suitable for the job than Carrie Fisher. A goddess among smart people, celebrities and erratic personalities. Joy would worship her, Hasselbeck would fear her, and she just might eat Barbara Walters for breakfast.

Once known as Donna Hanover Giuliani, she is a seasoned radio and TV professional with stints as an on-air personality in both New York and Miami. As her roles on-screen in "The People vs. Larry Flynt" and onstage in "The Vagina Monologues" prove, she is unafraid of controversy. She can also connect with the heavily female "View" demographic by drawing on episodes from her own life, like the time she moved in with a married man before his divorce, or the time she found out her significant other was cheating on her with one of his employees, or the time her second husband announced he was dumping her during a press conference. Oh wait, that was all the same guy.

As executive producer and head judge of that guiltiest of superficial pleasures "America's Next Top Model" (now in it's eighth "cycle"), and host of her eponymous daytime talk show, Tyra Banks has proven that her TV talents more than rival her assets on the catwalk. Ms. Banks not only knows how to rock a bustier -- she also turned a tabloid news cycle about her cellulite into an opportunity to preach the gospel of pudge and female empowerment. So if Walters & Co. are looking for someone who can lead; who combines the unabashed ambition of Oprah with the loose-cannon low-brow lovability of Liza Minnelli; who will challenge Barbara, charm Joy, and lay the smackdown when Elisabeth gets snitty: Tyra's their gal. (If we're lucky, she might even bring along Ms. J.) For while the pain of losing Rosie will be acute, with Tyra, America might just be able to "model through it."