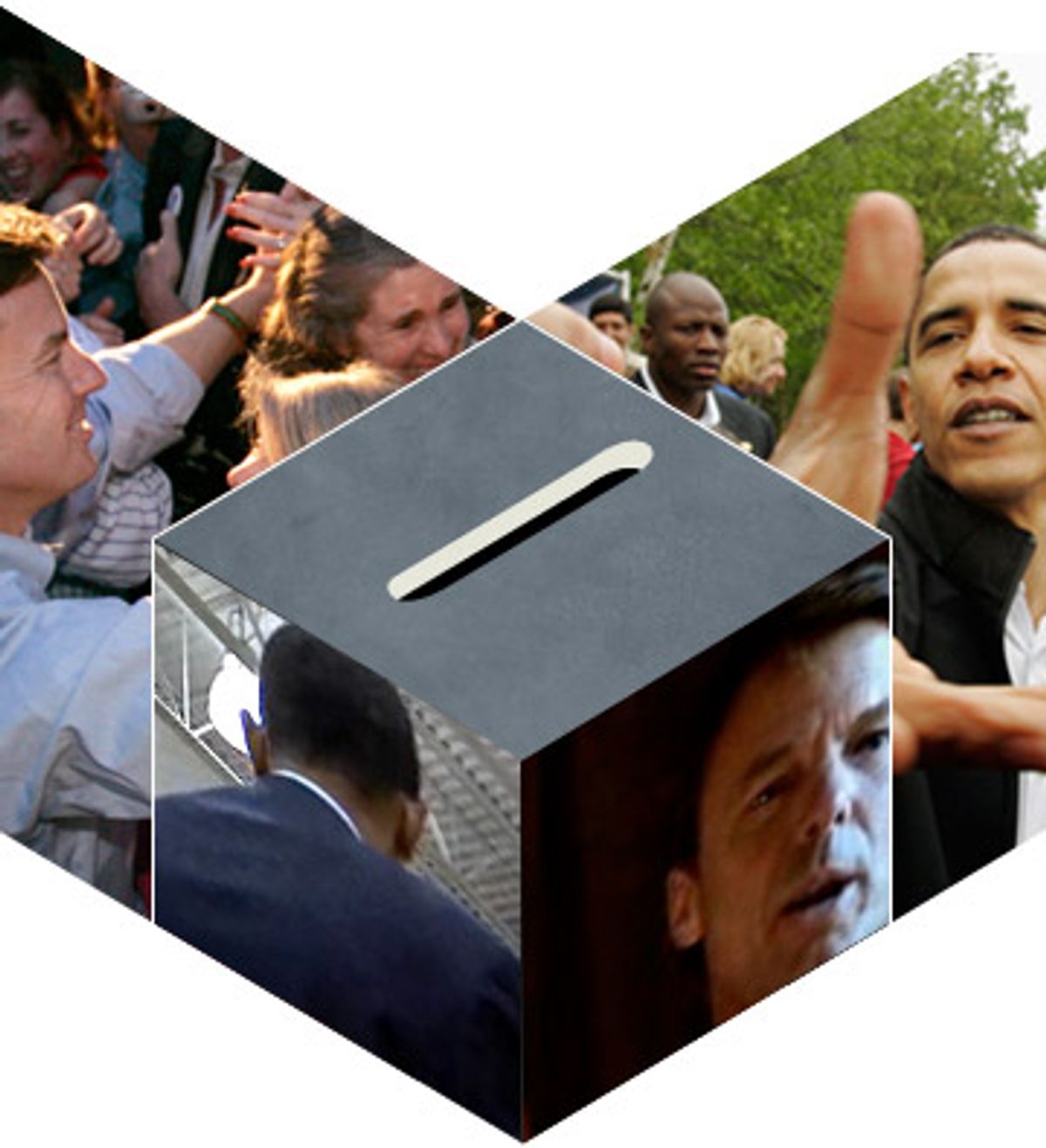 Barack Obama spent last Saturday telling supporters of his presidential campaign to gather signatures to end the Iraq war. "This is not just a political movement we are building here," he told a crowd of about 500 in Manchester, N.H. "We are trying to transform the country."

John Edwards, who also wants to be president, has been helping thousands of his supporters to organize in small groups across the country this weekend to oppose the war and support the troops. They will hang antiwar banners along freeways, host candlelight vigils and write letters to Congress, among other activities. "This Memorial Day weekend, don't stand quietly, don't just go to picnics, don't just gather with your friends," Edwards says in an online video message about the effort. "Engage in an act of patriotism. Show how much you love this country. Speak out in support of our troops and bring an end to this war."

Neither effort is wholly altruistic. The e-mails collected through Obama's petitions and Edward's Web site for organizing events end up in campaign databases, which can be used later for fundraising pitches and poll worker recruitment. But both Obama and Edwards have distinguished themselves in the presidential field by running campaigns that deliberately part with a longtime rule of election-year politics: Keep the spotlight on the candidate. They are trying, instead, to fashion campaigns that double as semiautonomous political movements, apparently based on the belief that a more populist approach -- or at least the appearance of one -- can win them their party's nomination. It is a strategy that contrasts strongly with the more conventional campaigns of the other leading Democrat, Hillary Clinton, as well as the entire Republican field.

"The whole focus of the Internet program is to enable people to work together to take action on the issues that matter," says Ben Brandzel, a former organizer for MoveOn.org, who heads Edwards' online organizing and fundraising program.

That strategy echoes, but also expands upon, the efforts of Howard Dean's 2004 campaign. "Simply asking people for money or e-mail addresses rarely builds support," says Andrew Raseij, a former Democratic campaign operative who founded TechPresident, a blog about online campaigning. "The campaign that encourages voter-to-voter communication has the potential of leveraging the power of the Internet."

Last weekend, this meant that Obama's New Hampshire supporters braved a light rain and rode yellow school buses to drop sites, where the volunteers went door to door, hawking a petition that told the state's two Republican senators, Judd Gregg and John Sununu, to "choose the people over their party and decide to end the war." At recent Edwards events, supporters have organized themselves with the campaign's blessing to donate blood, plant trees in a local park, and change their light bulbs to reduce energy consumption. "His goal isn't just to get elected president," Brandzel said of Edwards. "His goal is to get elected president to implement specific transformational changes."

The strategies of Obama and Edwards both embrace Dean's legacy. Though ultimately failing at the polls, the 2004 Dean campaign raised millions of dollars and mobilized thousands of voters. "One of the lessons that Obama and Edwards have learned from the Dean campaign is you gain power by giving it away," says Tom Hughes, the executive director of Democracy for America, a PAC that was originally founded to support the Dean campaign. "They are doing a terrific job of empowering their supporters."

On Tuesday, the home page of Obama's campaign Web site did not even feature a head shot of the candidate. Instead, there was a large photo of the New Hampshire volunteers, calls for supporters to sign up for the "16 Votes" campaign, which is designed to pressure Republican senators to vote for a withdrawal date from Iraq and a request for volunteers for a June 9 canvassing event called "Walk for Change." Roughly 70,000 supporters have set up profiles on Obama's Web site, where they can communicate with each other and organize their own political efforts. As Bill Burton, Obama's spokesman, put it, "The best thing we can do is give them the tools to organize and get out of the way, frankly."

Similarly, in recent weeks the Edwards campaign home page has been almost entirely devoted to the "Support the Troops, End the War" campaign and "One Corps," the campaign's volunteer arm. Edwards has broadcast television advertisements on national cable and in Iowa called "We the People," which show regular Americans speaking out against the war. The candidate only appears in the final seconds of the spots to say that he paid for the message. By design, the video was posted on YouTube so viewers could cut in their own homemade videos, making it the first interactive spot of the 2008 campaign.

Joe Trippi, the former Dean campaign manager who now works for Edwards, said not all of Edwards' campaign advisors initially bought into the idea for the spots. "It took about a week for everybody to go, 'OK,'" Trippi said. But he said the campaign is firmly committed to an interactive strategy. "People want to belong to something," he said. "They want to belong to a community that goes back to that notion that there is something bigger than yourself."

The rest of the electoral field has not yet fully embraced the Dean model of interactive campaigning, beyond the rote use of social networking tools like MySpace, FaceBook and YouTube. The campaigns of Bill Richardson and Chris Dodd have encouraged supporters to get involved on their own with online petitions and event planning tools. Clinton, who leads in most early national Democratic polls, has launched several online initiatives, including a recent campaign song poll and online forums where Clinton answers the public's questions. The campaign has also established its own news site, HillaryHub, and sponsored online petitions to advocate the firing of Attorney General Alberto Gonzales. After radio shock jock Don Imus made disparaging comments about the Rutgers basketball team, the Clinton campaign used its Web site to solicit letters of support for the team.

But Clinton's online efforts have largely focused on presenting the candidate to the public, rather than inviting the public to participate in efforts beyond the campaign. Phil Singer, a Clinton campaign spokesman, says using the Web will remain a priority for Clinton. "The Internet plays an integral role in modern politics," he said. "And we are making a concerted effort to aggressively leverage the online community."

The leading Republican candidates, meanwhile, have treated their online operations more or less like an electronic form of direct mail campaigning. John McCain offers updates from his activities on the campaign trail and autographed copies of his autobiography. Mitt Romney offers classic images of himself in front of American flags, along with quotes about his view on immigration. Rudy Giuliani is shown giving a speech in Orlando, Fla., next to a link to excerpts from the speech's text. The campaigns rarely seek to involve supporters through online outreach in anything beyond traditional volunteer work and fundraising.

For Obama and Edwards, the online campaigns also hold the advantage of reaffirming the campaign's carefully tailored images of their candidates as outsiders with fresh visions. Republicans, and some rival Democrats, have tried to paint Edwards as a wealthy, inauthentic candidate who cares more about his haircuts than issues like poverty, a caricature that his online organizing disarms. Obama, a former community organizer, has worked hard to cast himself as a movement leader, who is not just running for the White House but to change politics in broad ways.

This sort of sales pitch has worked well before online, with activist groups like MoveOn.org, and blogging communities like Daily Kos. "There are two ways to build a big group of supporters online, and you have to do both," explains Eli Pariser, the executive director of MoveOn. "One is, build leadership on the issues. And the other is taking the leadership on the issues to your constituency and saying this is not about me, this is about you."

But as Dean showed, online success does not necessarily translate into votes in the Iowa caucuses or the New Hampshire primary. With more than seven months before the first caucus or primary vote, candidates like Obama and Edwards will still have to prove the potency of their people-powered movements.