The best way to honor those who have fallen in this terrible war is to bring the troops home. 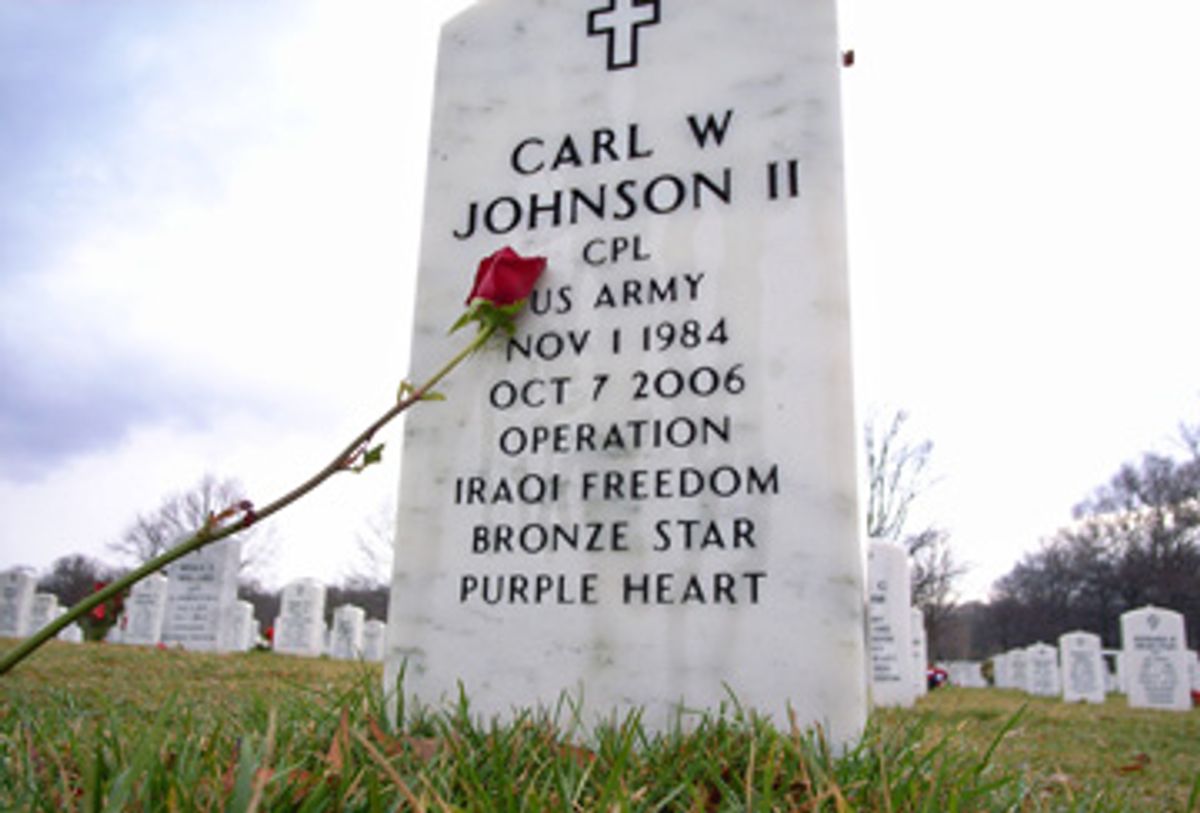 For me, like most other Americans, Memorial Day is a time for barbecuing, playing Frisbee, loading up coolers with iced beer, and getting out of town. I usually don't think about America's war dead on the last weekend of May any more than I think about our nation's independence on the Fourth of July, or about the birth of Jesus on Christmas.

No, my memorial days are scattered and irregular. It is monuments that have most often triggered reveries about fallen soldiers. The words "Is it nothing to you?" inscribed on the great gray World War I obelisk in downtown Vancouver, Canada, stopped me in my tracks late on a summer afternoon many years ago. I had not known this biblical phrase from Lamentations, never seen it on a war memorial before. Maybe it's a British thing. But for whatever reason, it arrested me, and those long-vanished men who died in fields in France or Germany suddenly appeared, a ghostly company waiting for the simple tribute of memory.

Another piercing moment came when I was visiting the Punch Bowl, the National Memorial Cemetery of the Pacific, in its stunning site in the mountains above Honolulu. I walked down the endless rows of names, all those Ensign Johnsons and Chief Petty Officer Robertsons and Sergeant Smiths, thousands upon thousands of them, covering the sunny walls as the ocean rolled on forever below. I was in the middle of a year of chemotherapy, and life seemed strange and precious and sad. Maybe that's why they came back to shadowy life, all those young men joined forever in the fraternity of death, guys in white T-shirts who once played ball and made out with their girls and worked in department stores and joined the Navy and were lost forever fighting a terrible and necessary war, and every one of those names seemed to be an imperishable building block out of which a country had been built.

Great poems can summon thoughts of those who fell in war, or those who survived. Take this poem from "Building the Barricade," by the Polish poet Anna Swirszczynska, who served as a nurse in the doomed Warsaw Uprising:

That young beanpole was maybe six feet tall,
that light-hearted worker from Powisle
who fought
in the hell on Zielna Street, in the telephone building.
When I changed the bandage on
his leg that was torn open
he winced, he laughed.
"When the war's over
we'll go dancing, miss.
It's on me."
I've been waiting for him
these thirty years.

But the one thing that always summons thoughts of those who died in war is Lincoln's Gettysburg Address. I came upon it most recently when riding my bike through San Francisco's Presidio. I discovered that it was inscribed on a white marble wall in the old military base's cemetery. Of the many places I've read it, this was the most moving -- outdoors, next to the final resting place of the honored dead. But read anywhere, the miracle of its 269 words never diminishes.

From Lincoln's majestic opening cadences, "Four score and seven years ago," to his stated intention to dedicate the field "as a final resting place for those who gave their lives that that nation might live," to the sublime humility that marks his movement into the final section -- "But in a larger sense, we can not dedicate -- we can not consecrate -- we can not hallow -- this ground" -- to the inexorable climax, in which Lincoln voices a sacred oath to carry out "the great task remaining before us," it is perfection. It is one of the greatest pieces of writing in our language -- one of the few things written in English in the last 400 years that can stand next to Shakespeare.

Lincoln's words made me think about the almost 3,500 Americans who have died in the Iraq war. And what we owe them. And what great task remains before us today.

Why should we think about our fellow countrymen who have died in wars? First, because we owe them. Because, in Lincoln's beautiful words, "they gave the last full measure of devotion." This is undeniable. But it's more complicated. Not all of America's wars -- or any country's -- are created equal. Some of our wars, like World War II, were justified and necessary. Others, like Vietnam and Iraq, were not. Can we, should we, honor a soldier who died in a foolish, even an immoral, war just as we do one who died saving the world from Hitler, Tojo and Mussolini?

I believe we have to honor all of the fallen equally, those who fell in necessary wars and those who died for a politician's folly. The distinction is between historical judgment and shared humanity. From the historical point of view, it's undeniable that we experience something different when we remember those who died in World War II than we do when we remember those who died in Vietnam. In both cases, the fallen men and women gave their lives for us. But -- tragically -- only those in the first group actually saved us. They beat Hitler; they saved the world. Those in the second group died because American officials in thrall to the domino theory decided that we had to stop communism from spreading through Southeast Asia. We feel deep gratitude and sorrow for both groups. But for the first, our gratitude is of a different nature, because it is a gratitude not only for the sacrifice made but for the actual achievement.

Yet this difference should not affect our remembrance of the dead. For soldiers do not get to choose the wars in which they fight. Most of them believe in good faith that they are serving their country and their fellow citizens -- although we know that in combat most soldiers fight not for such abstractions but for their buddies, their band of brothers, the guys next to them. That's as it should be. And their sacrifice merits remembrance, whether you agree with the war they fought in or not. Memorial Day should not be a partisan holiday.

War is accompanied by a vast and sacrosanct sentimentality, one that usually nauseates soldiers themselves, who know too well that war is, as the veteran war correspondent Chris Hedges noted, "industrialized slaughter." But one can be horrified by war, and appalled by our leaders' use of nationalistic and good-vs.-evil rhetoric to whip up support for it, and still honor the dead. Reverence and reflection know no politics. One need not believe that war is a glorious and noble undertaking, all trumpets blaring and banners waving, to salute its fallen warriors.

In the end it is our common humanity that calls us, war supporter or war opponent, hawk or dove, to remember those who died. We honor the dead, whether they fell on our side or that of our adversary, because of our shared humanity. One of the most moving scenes in the great 1939 film version of James Hilton's "Goodbye, Mr. Chips" is when the aging headmaster Chips, addressing his young charges during the Great War, eulogizes not only the fallen British youth whom he had taught but an old German friend.

It was a sudden revelation of this common humanity that touched me, that day in the Punchbowl years ago. And on this haunted Memorial Day, as we wait impotently for hundreds more American names to be etched on walls, and for tens of thousands more Iraqis to die, it occurs to me that this day should not primarily be a day of remembrance. Yes, we should and must honor the dead. But the best way to honor them is to embrace the humanity of those who are still alive. And bring them home.

Those of us who do not believe in Bush's war -- and that is a majority of the people in the country -- owe those who have died in Iraq more than respect and memory. We owe them righteous anger. We owe them outrage over a president so desperate and delusional that he is willing to pay with their blood to delay his day of political reckoning. We owe them our continued commitment to end this futile war.

For they are our comrades, too, even if we never shared a foxhole.

You, Sergeant Smith, whose name will be on a sun-drenched wall someday. I know you. I've never met you, but I know you. Twenty years from now perhaps my son will find your name, tracing the words with his wondering fingers on a piece of warm marble. If we were to meet at a Memorial Day barbecue, we'd drink a beer together, and eat some ribs, and I'd play catch with your raw-boned gangly awkward son, and your daughter would chase my daughter around the table with a squirt gun. We'd talk about the weather and why the Suns got jobbed and what we're doing this summer. We're Americans, God help us. We share that lame, wonderful DNA. We're both strung up on that old USA charm bracelet, hanging with Chuck Berry and Joltin' Joe and "The Sopranos." But instead of sitting by the lake firing up the Weber, you're walking through a field in Iraq, and you're going to die. And we will never sit there together in the friendly awkwardness of the American dusk, listening to the sprinklers coming on.

So this Memorial Day is for you, Sergeant Smith. You died in a pointless war, but we here highly resolve that you shall not have died in vain. In your name, we vow that our nation shall have a new birth of freedom. We pledge that we, the people, will reclaim our country. And we swear that we will never again send our brothers off to fight unjustifiable wars.