He is blazing a campaign trail away from conventional politics. But can he redeem the hopes that so many have placed in his historic candidacy? 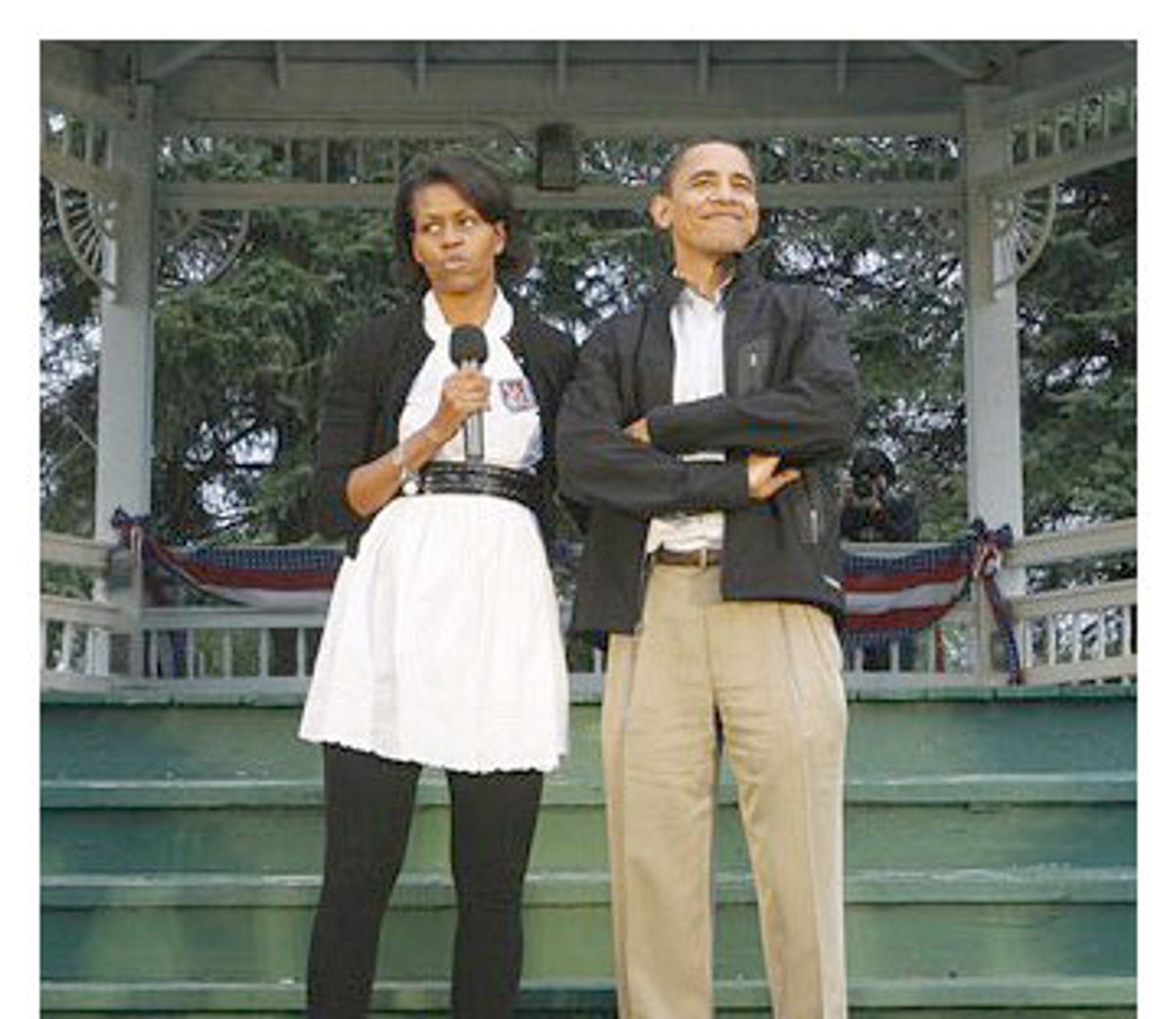 It was a movie director's idea of how to choreograph a political event. Begin with a sun-splendid Memorial Day afternoon. Add a pastoral Ivy League campus and a youthful crowd of about 5,000 would-be converts staring eagerly at the stage. Finish with a new-generation presidential candidate in a crisp white shirt, his sleeves rolled up, radiating coiled charisma.

At Dartmouth College Monday, Barack Obama had reached the practiced moment in his stump speech when he explains the Kenyan origins of his "funny name." Hearing this now-familiar story, a group of Kenyan students cheered lustily. "But my mother is from Kansas," Obama added. "Is anyone here from Kansas?"

Near silence. Finally, reflecting on his dual heritage, Obama said, "Kansans are a little less demonstrative than Kenyans are."

The Dartmouth rally came at the end of Obama's two-day tour of the North Country of New Hampshire, an area that easily fulfills every tourist-brochure fantasy of how small-town New England is supposed to look. The expectations for the Obama campaign, seven months before the New Hampshire primary, are a bit more daunting. The unanswerable question is whether this fledgling senator -- who has risen faster and higher from a single convention speech than any Democrat since William Jennings Bryan in 1896 -- can redeem the oversize hopes that so many have placed in his historic candidacy.

No would-be president can be fully judged from his appearances on the campaign trail. Such public moments do convey, however, the essence of the persona that the candidate is offering the voters. What leaps out watching Obama is that he often is as understated as a stereotypical Kansan. In situations where most Democrats would resort to heart-on-the-sleeve emotionalism, Obama is a portrait of thoughtful reticence.

In political terms, this campaign will test whether the Democratic voters will pick a nominee who waxes cool while his major rivals (certainly John Edwards and Hillary Clinton, by marriage and learned experience) burn hot. As David Plouffe, Obama's campaign manager, put it, "For people who only know him through his [2004] convention speech in Boston, it can be a little arresting that he isn't pounding the podium. But that's him. He's a cerebral, thoughtful person."

It is not that Obama necessarily underperforms as a candidate, though he was flat during the Democrats' opening-gun debate in South Carolina late last month and at a rally in Charleston the next day. But while Obama can dominate a room or a stage, his style is pure 21st century. Win or lose, Barack Obama is the Democrats' first post-Clinton politician.

The appeal of Obama is undeniable -- he drew more than 1,000 people to a Sunday rally in Conway, a town in which only 3,000 voters turned out last November. During the question session, a woman stood up in the middle of the high school gym to complain about the near-impossibility of living on her $800-a-month Social Security disability check. In response, Obama launched into a reasoned dissertation on the Social Security issue, talking about how George W. Bush exaggerated the funding crisis to sell his privatization scheme and declaring, "We have to stop borrowing from Social Security to pay for the war in Iraq."

Only after he spoke for nearly two minutes did Obama begin to acknowledge the person and the pain behind the question. "It's also true that disability payments sometimes are not sufficient," he said, "and I would have to know exactly what your situation is to determine the category you fall in." Finally Obama uttered the sentence that would have leapt instantly to almost any other candidate's lips: "I know how tough it is to live on Social Security."

A little later in the questioning, a man announced that his son was a paratrooper headed to Iraq and denounced the congressional Democrats for backing down on a timetable for withdrawal. (Obama, like all his Democratic rivals in Congress, save Joe Biden, were part of the minority opposing continued unrestricted funding of the war.) In his lengthy response, Obama talked about how he "struggled" with his Senate vote and understood why "my colleagues had a hard time with it." But Obama, the only leading Democratic presidential contender to oppose launching the Iraq war, went on to say, "I couldn't in good conscience continue on a course that wasn't working."

There was only one thing that was surprising about Obama's answer -- he never once acknowledged that he was talking to the father of a soldier headed into a brutal war zone, a parent who feared that his son might die in a conflict that has lost any rationale or larger meaning.

This is not to argue in any way that Obama is unfeeling, but rather to stress that his campaign style avoids many of the commonplace rituals of political life. Obama also seems reluctant to play the populist card that has been a staple of Democratic rhetoric for decades. Previewing his plan for universal healthcare coverage at an ice-cream party in a downtown park in Berlin, N.H., Sunday night, Obama went out of his way to declare, "I'm not somebody who will run down the insurance companies and the drug companies just for the sake of it."

Drug companies and insurance companies have long been a favored target of Democratic presidential candidates. They were directly in the firing line when Al Gore built his 2000 campaign around -- not global warming or the environment -- the mock populism of "the people vs. the powerful." Neither Edwards nor Hillary Clinton is apt to miss many opportunities to go after the greed of the pharmaceutical industry. But there was Obama, speaking to a largely Democratic audience in an old pulp-and-paper town, promising not to take any cheap shots at these corporate villains.

Tuesday morning in Iowa, Obama unveiled his long anticipated healthcare plan -- joining Edwards, the initial policy pacesetter, and Hillary Clinton, who once claimed this as her signature issue in a competition to provide universal coverage for the 45 million uninsured Americans. The Obama proposal, which was estimated to cost between $50 billion and $65 billion a year, would both create a new national healthcare plan for those without coverage and launch a new federal watchdog agency to set standards for (and police) the insurance marketplace.

With another Democratic debate slated for Sunday night, it is possible that the campaign may pivot for a while on the details of the rival healthcare plans. This was the terrain of the 2000 battle between Al Gore and Bill Bradley. More likely, the model will be the 2004 campaign in which all the Democratic contenders announced their healthcare plans with great fanfare -- and then watched the race revolve around the war in Iraq.

Obama over the weekend was accompanied on the campaign trail by both his wife, Michelle, and their two young daughters. (If the race ever narrows down to Obama vs. Edwards, they could have an entire debate revolve around who has the cuter children.) Watching the Obamas as a political couple, it seemed evident that Michelle had been given responsibility for public shows of empathy.

Sunday night, as the sun was setting in Berlin, Obama agreed to take a final question. A 22-year-old woman stood up, leaning on a cane, and spoke movingly about the disabilities that have ravaged her life. (Her symptoms are somewhat analogous to those of multiple sclerosis.) "I want to go to college, " she declared. "I want to work, I want to do those things that some people with healthy bodies take for granted." She then asked the candidate whether he would restore funds for programs for the disabled that the Bush administration had cut.

This time Obama acknowledged the woman directly: "You have made a powerful presentation, so I know that you will go far. It's extraordinary. The main thing I'm going to do is to listen to you and those like you." He then began criticizing recent federal court decisions restricting the Americans With Disabilities Act. But Obama did not stay with the dry dissertation of policy for long and turned back to the woman, fighting to stand erect with the help of her cane. Looking out at her through gathering gloom, he said, "This is something that we understand pretty well -- Michelle can talk to you later -- because Michelle's father had M.S."

Afterward, Michelle Obama raced over to the young woman -- a blogger who goes by the screen name of "Megan Wilson," who asked that her real name not be published -- and embraced her. Megan began sobbing, saying, "I know I'm courageous, but my body doesn't like me." Michelle Obama held her for a long time and promised to bring over her husband. When Obama arrived, five minutes later, he said, "You spoke so well, we're proud of you." And then added, "You'll head our disabilities agenda." But he left the hugs to his wife.

There is a risk in drawing firm conclusions from these small moments on the campaign trail. But with the traditional intimacy of the primary warm-up season virtually stripped from the current presidential campaign, these glimpses of something approaching reality are how we come to understand a candidate as a person rather than as a set of position papers or as a walking résumé.

So here is a working theory, subject to many modifications as the campaign unfolds: Barack Obama is simultaneously both aware of the power of cheap rhetoric and easy emotion -- and intellectually contemptuous of it. He is a candidate in quiet rebellion against the banalities that too often govern political discourse. It is questionable whether he can maintain this high-minded stance through the debates and the primaries. But for the moment, Obama is running for president on his own terms, and succeeding.