In New Hampshire, the Democrats play a little rougher

At the second presidential debate, the party's front-runners start staking out their turf. 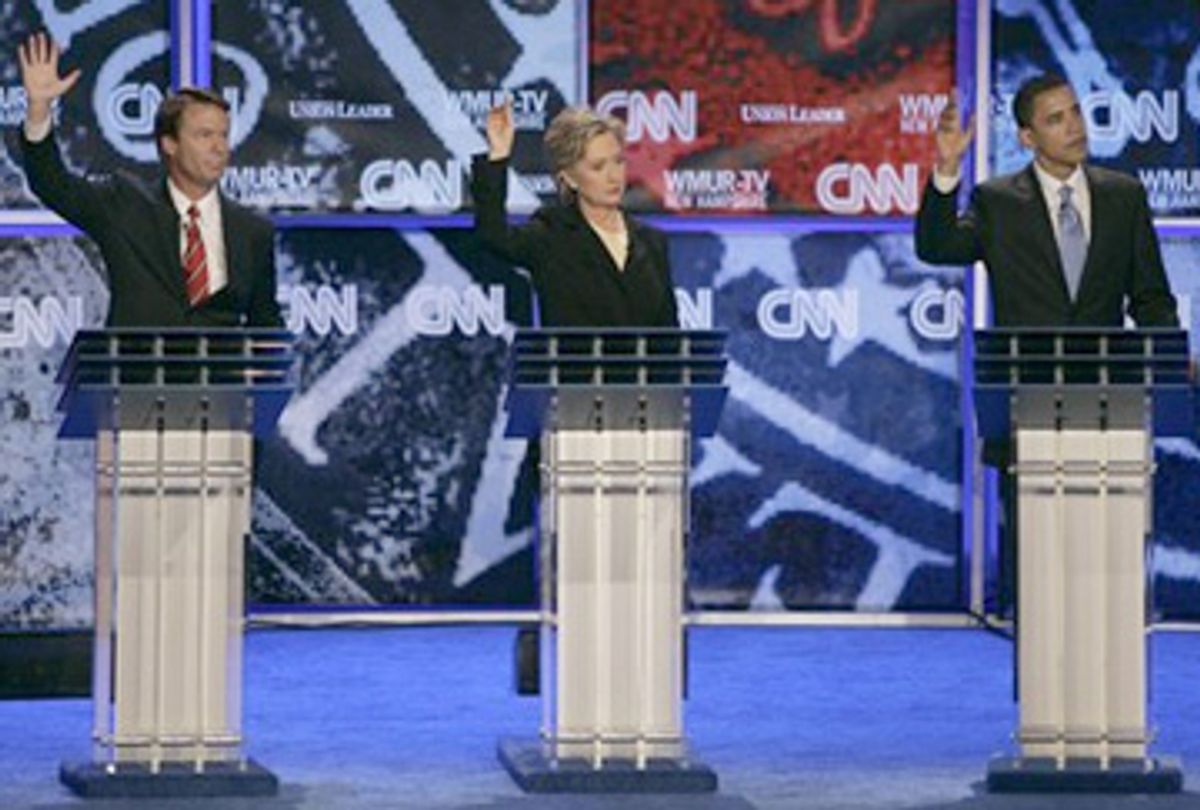 Sunday night's two-hour marathon here was the foreshadowing debate -- a prelude to the coming Democratic scrap over personalities and issues. As the party's eight presidential contenders met for their second go-round, the fault lines that will define the Democratic race this winter began to emerge.

Hillary Clinton again was the candidate who combined sure footing, a deft grasp of the issues, a dollop of caution and a steadfast refusal to admit error. Asked about her failure to read the entire classified National Intelligence Estimate before she voted in 2002 to permit Bush to go to war, Clinton said unapologetically, "I was thoroughly briefed. I knew all the arguments. I knew all of what the Defense Department, the CIA, the State Department were all saying. And I sought dissenting opinions, as well as talking to people in previous administrations and outside experts."

John Edwards, who was stronger than in the first debate in late April in South Carolina, appears to be growing comfortable in his chosen role as the anti-Hillary, the candidate who embraces risk. In one of the sharper exchanges of the night, Edwards, who had waxed hawkish during the run-up to war, faulted Clinton for not repenting her vote: "I think one difference we do have is I think I was wrong. I should never have voted for this war."

Sunday night Barack Obama was not reined in by a rigid time clock as he was in South Carolina; in fact, the freshman Illinois senator got the most airtime (16 minutes), according to a time log prepared by the campaign of Chris Dodd (who got little more than half that amount). But Obama still has not found a way to excel in a multicandidate debate format. His answers, while solid, never matched the electricity that his candidacy has generated in other settings.

This is not to suggest that Obama is a turn-the-other-cheek candidate. As the only major Democratic contender who opposed the Iraq war from the outset, Obama landed a punch when he replied to Edwards early in the debate, "I think, John -- the fact is that I opposed this war from the start. So you're about four and a half years late on leadership on this issue."

Make no mistake, this was still a mostly polite debate, not a political blood bath designed to prime voters for the next-to-the-last episode of "The Sopranos." Nothing that occurred on the stage at Saint Anselm College on this late spring night is apt to be specifically remembered when New Hampshire voters go to the polls in the dead of winter. There were no devastating one-liners, no breakthrough emotional moments nor candidate meltdowns.

But what the debate did underscore was the unfair nature of the 2008 Democratic contest. From the not-so-random positioning of Edwards, Clinton and Obama at the center of the stage to the flexible time clock when any of the trio were speaking, this debate highlighted the reality that while all candidates are equal, three of them are more equal than the others.

CNN, which hosted the debate with local TV station WMUR, clearly made a decision that the emphasis of the debate should reflect the pre-primary polls and fundraising numbers. This decision may not have been equitable, but it is journalistically defensible, unless you happen to believe that former Alaska Sen. Mike Gravel (who has not held office since the Reagan administration) has as good a chance of being the Democratic nominee as Hillary Clinton.

Reduced to the status of a Greek chorus, the five Democratic also-rans had a difficult time breaking through the clutter. Joe Biden did have a strong moment when he challenged the growing panic over the threat of Iran producing nuclear weapons. The chairman of the Senate Foreign Relations Committee said bluntly, "Understand how weak Iran is. They are not a year away or two years away. They are a decade away from being able to ... put a nuclear weapon on top of a missile that can strike. They are far away from that." But Biden also blustered in the same answer when he said defiantly, "At the end of the day, if they posed a missile, stuck it on a pad, I'd take it out."

The question of how tough a Democratic presidential candidate needs to sound to get elected hovered over the debate, as it may over the coming primary races. Edwards boldly defended his prior comment that the "war on terror" was little more than rhetoric: "This global war on terror bumper sticker -- political slogan ... was intended for ... George Bush to use it to justify everything he does: the ongoing war in Iraq, Guantánamo, Abu Ghraib, spying on Americans, torture."

That was too much for Clinton, who, as the first woman to wage a serious candidacy for president, must understand the political risks of seeming weak in any setting. Responding to Edwards, she said flatly that she disagreed, before adding, "I am a senator from New York. I have lived with the aftermath of 9/11, and I have seen firsthand the terrible damage that can be inflicted on our country by a small band of terrorists who are intent upon foisting their way of life and using suicide bombers and suicidal people to carry out their agenda."

Opening another front in what promises to be a lengthy war of dueling policy points, Edwards and Obama scrapped over the details of their healthcare plans. The format did not allow either candidate to amplify his points in a way that would be comprehensible to most voters -- Edwards, for example, claimed that the Obama plan would not cover all uninsured Americans because it did not mandate that individuals purchase insurance. Yes, this detail sounds wonky. But the political message was designed to portray Edwards as bold and Obama as more of a moderate on the most pressing domestic issue for most Democrats. At this point in a long campaign, debates are mostly about positioning. Edwards is clearly gravitating to the left flank of the party, while Clinton remains the candidate most palpably concerned with how her words in a Democratic debate will play in the fall election. Obama is still a candidate in the making, alternating between stressing his sterling antiwar pedigree and his more moderate tenor as a senator.

In fact, the Democratic race as a whole is still in transition, yet to find the issue that will help define the field, as Iraq did in the run-up to the 2004 primaries. But pretty soon the preliminaries will be over -- and the light jabs in Sunday night's debate will be replaced by more frontal attacks. The great spate of debates does, at times, seem endless, but debates remain the best mechanism available to sort out a presidential field.