What you missed while watching "Deal or No Deal"

Salon watches the third GOP debate so you don't have to: God frowns on Giuliani, Romney does weird math on Iraq, Thompson proposes a Bush morality tour, and more. 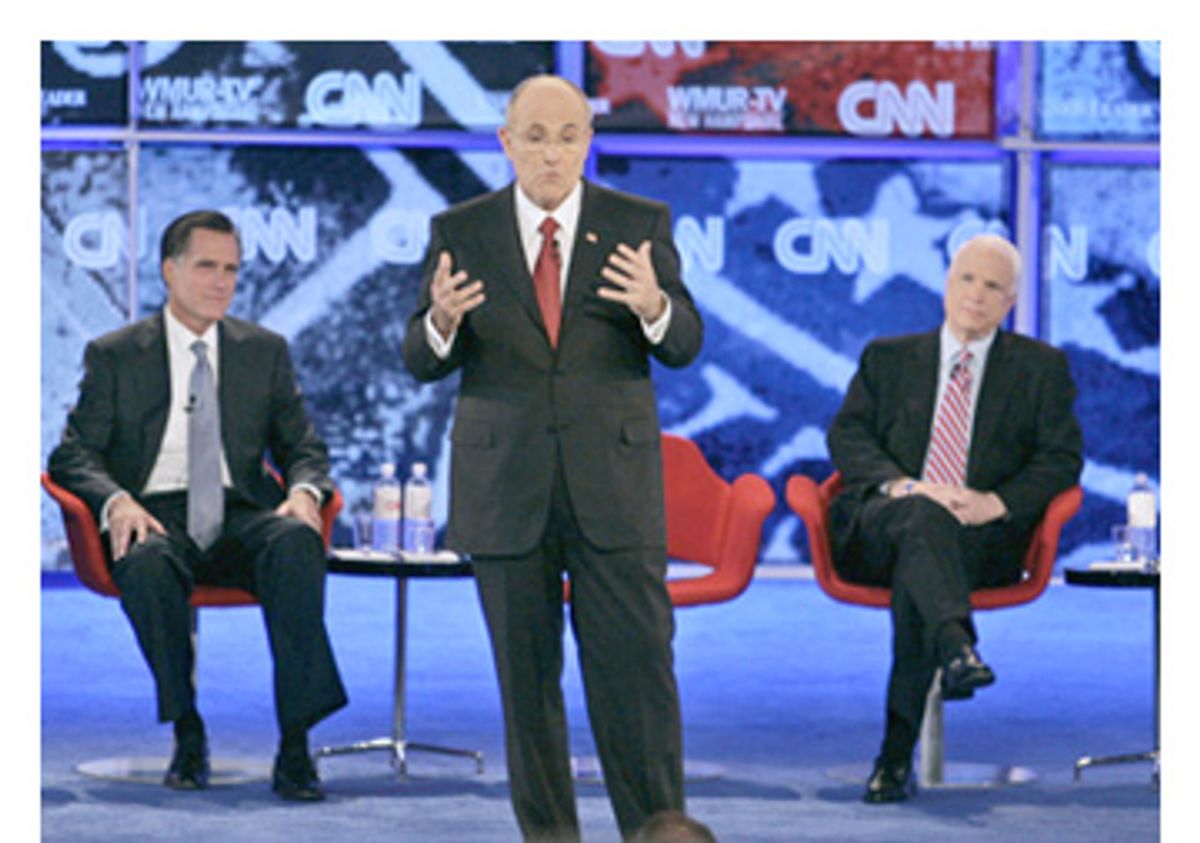 0 minutes. CNN moderator Wolf Blitzer, with his signature no-personality style, welcomes everyone to St. Anselm College. His voice is deep, without natural inflection, mechanical. His tie is powder blue. He asks each candidate to introduce himself with "one short sentence."

2 minutes. "My name is Thompson, Tommy Thompson," says the former Wisconsin governor, in his best James Bond impersonation. Former Massachusetts Gov. Mitt Romney, who is worth $350 million and does not live in your neighborhood, introduces himself as a "neighbor." Former Arkansas Gov. Mike Huckabee apologizes to the crowd for his hometown, Hope, Ark., which birthed Bill Clinton. "All I ask is give me one more chance." People laugh.

4 minutes. The first question goes to Romney. It is concise. "Was it a mistake for us to invade Iraq?" Romney won't answer. He calls the question "a non sequitur." He also calls it "a null set," which is a term from mathematical theory that means something complicated involving X, if X is a measurable space, and the "sigma ideal." Instead, Romney attacks Democratic Senate leader Harry Reid for saying the war is lost.

5 minutes. Undeterred, a reporter from the Manchester Union Leader asks Romney the same question again. "Was it a mistake for the United States to invade Iraq?" Romney says "null set" again, maybe with more feeling this time. Then he says, "That I think is an unreasonable hypothetical."

6 minutes. The question is asked a third time, but now to former New York Mayor Rudy Giuliani. "Absolutely the right thing to do," Giuliani says without hesitation. Ouch. That must hurt for Romney.

10 minutes. Arizona Sen. John McCain is asked what will happen if generals report that the surge of troops in Iraq is failing. McCain says he met this morning with the family of a fallen soldier. Then he attacks Hillary Clinton for saying Iraq is "Mr. Bush's war." "I didn't say that Bosnia, our intervention there, was President Clinton's war," McCain explains. This is how it is done. If asked a tough question, treat Democrats like pincushions.

14 minutes. Republican gadfly Ron Paul says this about Iraq: "We're not making progress there and we should come home." The audience applauds. Huh? Who did CNN invite to this debate? They are Republicans, right? Something is afoot. The liberal media may be to blame.

21 minutes. California Rep. Duncan Hunter says he might "authorize the use of tactical nuclear weapons" for a preemptive strike against Iran to destroy nuclear centrifuges. This would be more scary if Hunter had any real chance of becoming president.

22 minutes. The microphones are squelching. Rigid Blitzer says, "If you are hearing some sounds out there, it's lightning." Lightning, of course, is not the sound. Thunder is the sound. But lightning can cause electronics to belch noise. Blitzer, who appears to be built partly from electronics, is an authority.

25 minutes. The question of immigration goes to Romney, who was recently attacked by McCain for criticizing President Bush's compromise plan without offering an alternative. "Well, he's my friend," Romney says of McCain. "He campaigned for me two times. I consider him a friend." This is hard to believe, as these men have hired people to destroy each other. They are friends like the two guys in "Spy vs. Spy" are friends. Just a couple weeks ago, McCain accused Romney of owning "a small varmint gun" and employing Guatemalans. This is not Romney's best debate performance.

35 minutes. Blitzer asks if any of the Republicans onstage disagree with the claim that English should be the official language in the United States. McCain is the only one to raise his hand. "I would like to remind you that we made treaties with Native Americans such as the Navajos in my state, where we respect their sovereignty and they use their native language," he says. "It's no big deal." He stands alone.

40 minutes. God does not appear to be happy with Giuliani. When the former mayor tries to answer a question about a Catholic bishop who compared him to a biblical betrayer of Christ, the lightning hits the sound system. Squiggly squelches. "That's the lightning," says Blitzer-bot. Giuliani smiles and points to the heavens. Romney and McCain edge away from him on the stage. He could be struck down at any minute.

42 minutes. Huckabee, who is a Baptist pastor, is asked to explain why he doesn't believe in evolution. His answer is moving, eloquent and inclusive. "Let me be very clear. I believe there is a God. I believe there's a God who was active in the creation process. Now, how did he do it and when did he do it and how long did it take, I don't honestly know," he says. "And I don't think knowing that would make me a better president." His pacing is perfect, yielding the loudest applause of the night. Huckabee may be one of the most talented Christian communicators to rise in America since Billy Graham. It's a wonder that he gets so little support from the religious right.

48 minutes. Giuliani gets a question about global warming and his microphone briefly goes out again. There is a lesson here: If it is raining, do not walk next to Giuliani in an open field.

55 minutes. Huckabee reveals the darker side of his faith. Answering a question about gays in the military, he calls homosexuality an "attitude." "It's about conduct," he says, endorsing the current policy that bans gays and lesbians from serving openly. "It's not about attitude."

59 minutes. The gays in the military question goes to McCain. He soars. "We have the best-trained, most professional, best equipped, most efficient, most wonderful military in the history of this country. And I'm proud of every one of them." But McCain also says that the current policy, whose net effect is expelling gays for being gay, "is working."

60 minutes.Former Wisconsin Gov. Tommy Thompson is asked how he would employ President George W. Bush if he won the White House. "I certainly would not send him to the United Nations," Thompson says. "I would put him out on a lecture series, talking to the youth of America about honesty, integrity, perseverance, passion." He says this with a straight face. Former President Bush doing middle school talks about the Golden Rule.

67 minutes. Blitzer announces a break so chairs can be set up onstage. CNN cuts to Anderson Cooper and Larry King. Blah, blah. The Discovery Channel is showing a rerun of "Deadliest Catch." It's a good one. "Busted buoys, broken pots, and a blown engine have put the Northwestern more than a week behind schedule," reads the teaser.

73 minutes. OK, we're back. Everyone is in a chair. Brownback leans forward. Huckabee has two hands on one knee. Former Virginia Gov. Jim Gilmore has crossed his legs. A question from the audience: A woman describes how she lost her little brother, First Lt. Michael Joseph Cleary, in Iraq. She asks how the candidates would bring a resolution to the war and bring the soldiers home.

75 minutes.Hunter answers by talking about how his son is serving in the military. Brownback announces a new plan to partition the country. McCain, breaking format, leaves his chair to answer her question. He tells her, "This is long and hard and tough. But I think we can succeed. God bless you." The camera cuts back and forth to the woman's face. McCain is at his best when he is talking about the military. He has an authority and compassion that the others lack.

100 minutes. Colorado Rep. Tom Tancredo explains why Spanish speakers may soon destroy America, and why he would never advertise in his campaign for president in Spanish, which Romney does. "English is the language of this country," he says. "We should not be ashamed of that." Blitzer intervenes, "Sen. McCain, I'd like you to respond."

116 minutes. Time is running out, so Hunter makes a last ditch attempt to draw blood. For no particular reason at all, he starts attacking the front-runners. "Governor Romney joined with Bill Clinton for the 1994 gun ban," he says. "Mayor Giuliani stood with him at the White House for that ... John McCain is standing strong with Ted Kennedy on this Kennedy-McCain-Bush border enforcement bill." Then he moves in for the kill. "I think the guy who's got the most influence right here with these three gentlemen is Ted Kennedy." Kaboom!

117 minutes. Blitzer asks the three men to respond, but they decide not to. Romney talks about Reagan. Giuliani talks about Islamic terrorism. McCain talks about protecting the family. Hunter's bomb ends up a dud.

120 minutes. The debate ends. Blitzer tries to do an impression of Mister Rogers. "This unfortunately is the time for us to say goodbye." It falls flat. Not a big deal. Two hours is a long time to sit watching 10 Republicans in dark suits. And the Discovery Channel is about to debut a new episode of "Deadliest Catch." "Greenhorns are put to the test as the Bering Sea's harsh winter weather deteriorates," reads the teaser. Sort of like the Republican debate. Only much cooler.