He just quit the GOP and became an independent. But does America crave a sane version of Ross Perot with actual governing experience? 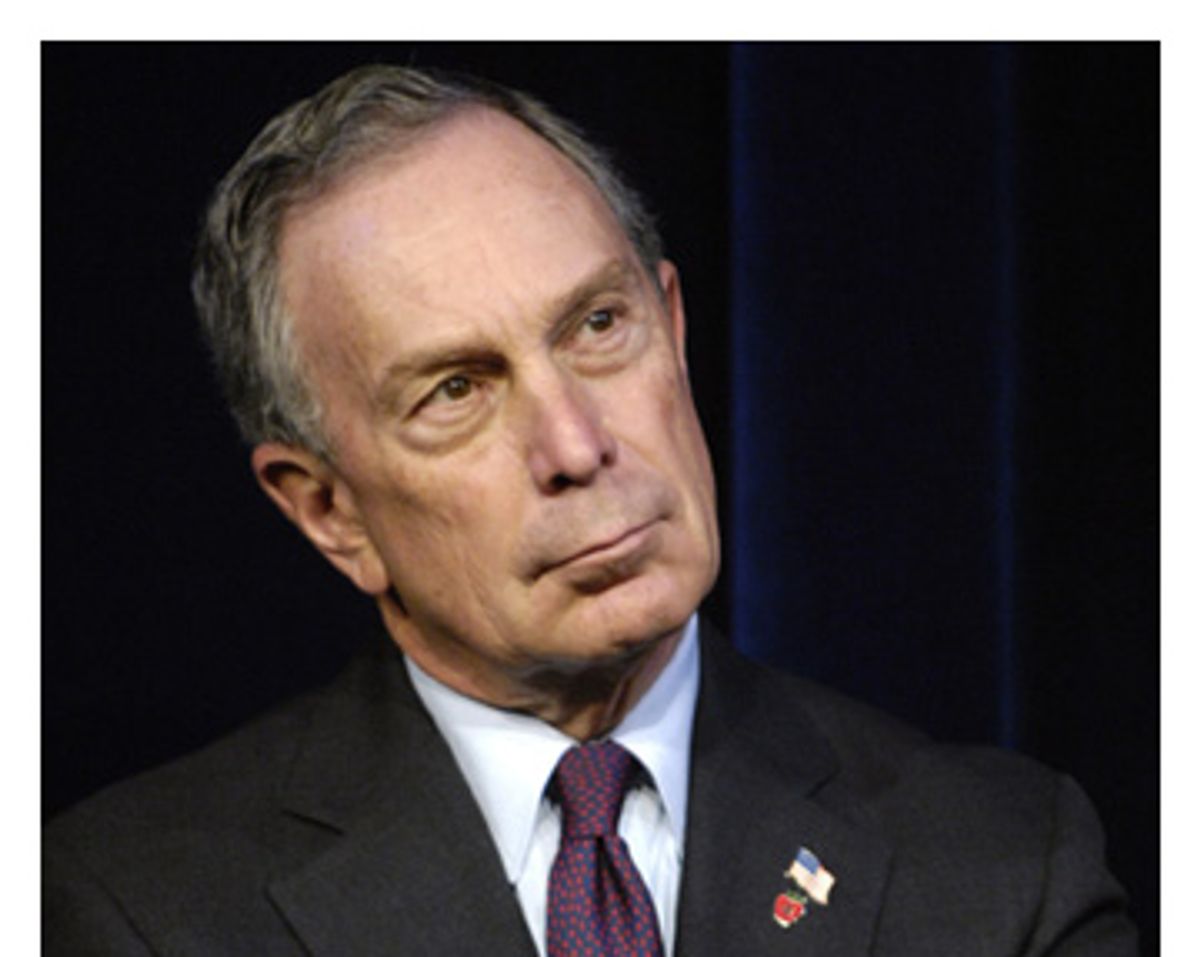 Mike Bloomberg, the mega-billions mayor of America's richest city, proclaimed his above-the-fray neutrality in the presidential race at a recent press conference.

"I'm going to stay out of both the primaries and the general election because I've got to work with everybody as mayor of the city of New York," declared Bloomberg, a Democrat turned nominal Republican and now independent who has been elected to two terms as Rudy Giuliani's successor. "And if I pick sides, the public may not feel that I'm representing them."

These seemingly laudable sentiments deserve a Bronx cheer because they collide with reality. As host of the 2004 GOP Convention, Bloomberg praised George W. Bush from the stage at Madison Square Garden for "leading the global war on terrorism." And Bloomberg's top political advisors make scant secret that they are currently plotting ways for him to enter the 2008 White House field as a problem-solving independent, socially liberal and fiscally responsible.

Talk about New York City in your face -- imagine a three-way contest among Hillary, Rudy and Mayor Mike. About the only thing for sure is that the Second Avenue subway would be built, no matter who won.

Bloomberg waves off the presidential speculation, repeatedly joking about the political prospects on a national stage of a divorced, 5-foot-7 Jewish billionaire. But make no mistake, the Bloomberg high command is serious about calculating all the odds and angles, comfortable in the reality that a Daddy Warbucks candidate can defer a decision until early next year.

Watching the 65-year-old Bloomberg revel in being mayor suggests that he has outsize ambitions even by New York standards. He is conscious of his legacy as the mayor who battled for public health (banning restaurant smoking and trans fats) and the environment (his current crusade is to tax cars and trucks entering central Manhattan) and presided over a buoyant economy (a $4.4 billion budget surplus and the lowest unemployment rate in more than three decades).

In many ways, Bloomberg is the anti-Giuliani, who goes out of his way to avoid the polarizing pyrotechnics of his predecessor. "Mike doesn't govern New York as a normal mayor," said Mitchell Moss, a professor of city planning at New York University and an informal advisor to Bloomberg. "Normally you govern New York by primal therapy. Mike has done it by being direct and candid."

As Queens City Councilman Eric Gioia, a Democrat who has sometimes tangled rather than tangoed with the mayor, put it, "He gets high marks for lowering the temperature in New York. There won't be any race riots on Mike Bloomberg's watch."

Bloomberg (the ultimate self-made politician) sometimes radiates a noblesse-oblige attitude toward critics and an impatience with the demands of the city's rapacious press corps. At the Brooklyn press conference in late May, a reporter began a question about a police shooting by saying, "The attorney representing the familyb

Hemmed in by term limits that will force him to leave office after the 2009 municipal election, Bloomberg seems to be searching for new worlds to conquer. With Eliot Spitzer just inaugurated as New York's first Democratic governor in 12 years, there is only one elective job soon to be vacant for a politician with Bloomberg's bent for executive leadership -- and its home office is on Pennsylvania Avenue.

"Mike Bloomberg should run for president for one reason -- America and the rest of the world is ready for change," said Moss. "We've had eight years of ideology. It would be worthwhile to have someone who just cares about getting things done."

While Moss is a public cheerleader, there is also widespread private speculation around City Hall that Bloomberg may actually do it. "Bloomberg has everything he needs to run for president without consequences," said a leading New York City Democrat. "And he's self-centered enough to do it." Christine Quinn, the Democratic speaker of the City Council and a Bloomberg fan, is convinced that the mayor has no intention of entering the presidential fray. But even Quinn admits that the speculation helps Bloomberg.

The architects of a Bloomberg presidential boomlet start with the premise that nearly 40 percent of voters define themselves as independents. (That statistic may be slightly exaggerated. Surveys by the Pew Research Center for the People and the Press have placed the number of self-described independents at around 30 percent for the past three years, though that figure has been trending higher in 2007.)

Equally potent in the calculations is the rush to judgment that will be caused by the clustering of the presidential primaries. With roughly half the nation voting next Feb. 5, it is likely that the de facto nominees in both parties will be known by the following morning. What that front-loaded calendar sets up is a nine-month, trench-warfare presidential campaign, the sheer negativism of which could produce a wave of buyer's remorse by November.

Playing into this Bloomberg third-way scenario is the voting public's distaste for the way politics is practiced in Washington. An Associated Press/Ipsos Public Affairs poll released this week found that only 21 percent of the voters believe that the nation is on "the right track." And while Bush's approval ratings can charitably be described as subterranean, Congress, even after the Democratic takeover, is almost as scorned by the voters.

What gives Bloomberg's third-party presidential speculations more heft than, say, those of antiwar GOP Nebraska Sen. Chuck Hagel, is cold hard cash. (Bloomberg and Hagel, incidentally, dined together recently in Washington, raising the possibility of an alliance.) With a net worth of $5.5 billion (according to Forbes magazine), Bloomberg would be assumed to spend $300 million to $500 million of his own money on building his own tollway to the White House. The mayor, whose reelection in 2005 was never in doubt, still spent $80 million to guarantee a second term

Winning ballot access in all 50 states, while daunting, is achievable, especially for a candidate who can afford an army of petition gatherers and election lawyers. An independent group, Unity08, founded by alumni of the 1976 Carter and Ford campaigns, is currently working to provide a vehicle for a middle-of-the-road third-party candidate in 2008 -- who might be Bloomberg, Hagel or someone else. Doug Bailey, a former Republican consultant who later founded the political compendium the Hotline, predicted that Unity08 would be "well on its way to being on all 50 state ballots when the major primaries are held in February."

But does America in 2008 crave a sane version of Ross Perot with actual governing experience? Perot, who dropped in and out and back into the 1992 race, received 19 percent of the vote, despite his blatant flakiness.

The problem with the Perot parallel is that it predates the deadlocked 2000 election and the lasting consequences (Bush's presidency) of the protest votes for Ralph Nader. To be successful, an independent candidate like Bloomberg probably needs to cut into the vote for a major party. But Democrats are displaying uncharacteristic unity this year. The Republicans, in contrast, may be close to fracturing on the immigration issue, but Bloomberg is the antithesis of the close-the-borders and throw-away-the-key Lou Dobbs-type much of the GOP base seems to want.

"I don't see an appetite on the Democratic side for another candidate, since they are happy with their choices," said pollster Andy Kohut, the president of the Pew Research Center. "And on the Republican side, they're not happy with their choices, but they're also not looking for a centrist independent who is a mayor of New York." The number of real independents, meanwhile, estimates Kohut -- meaning voters who are truly "unmoored from either party" -- is only 15-20 percent of the electorate, and "half of them don't vote."

Another skeptic is Mark Mellman, a Washington Democratic pollster who worked for Bloomberg's 2001 mayoral opponent, Mark Green. "History would certainly dictate that Bloomberg as a third-party candidate wouldn't have much chance to win the White House and current polling would indicate that he wouldn't have a chance," said Mellman. "But a candidate spending $300 million, $700 million, $1 billion is so outside the historical experience. It still doesn't seem likely, but who knows."

Ultimately, it will all come down to what Bloomberg sees in the shaving mirror every morning. Those close to him speculate that he would be most tempted to run if both parties nominate ideologically divisive figures.

Bloomberg (who speaks fondly of John McCain) might be goaded into the race if the Republicans pick a social conservative, say, Fred Thompson or Mitt Romney, who runs as the Great Right Hope. Among the Democrats, John Edwards, a former trial lawyer (an occupational pedigree not beloved by financial leaders like Bloomberg) running on the liberal end of his party, might arouse Bloomberg's ire. In contrast, the billionaire mayor presumably would not oppose Barack Obama, since Bloomberg would not want to be remembered for standing in the doorway after the first African-American in history won a major-party presidential nomination.

While not as much a public baseball fan as Giuliani, Bloomberg can be seen, from time to time, at Yankee Stadium. That means after every Yankee victory, the mayor hears Frank Sinatra singing about New York: "If I can make it there, I can make it anywhere." Small wonder that as Mike Bloomberg contemplates the future, his make-it-anywhere fantasies may extend to the White House -- and, at minimum, roiling the presidential race.