New details about his secret mission to expand the power of the president show that Cheney, at the end of his career, refuses to loosen his grip. 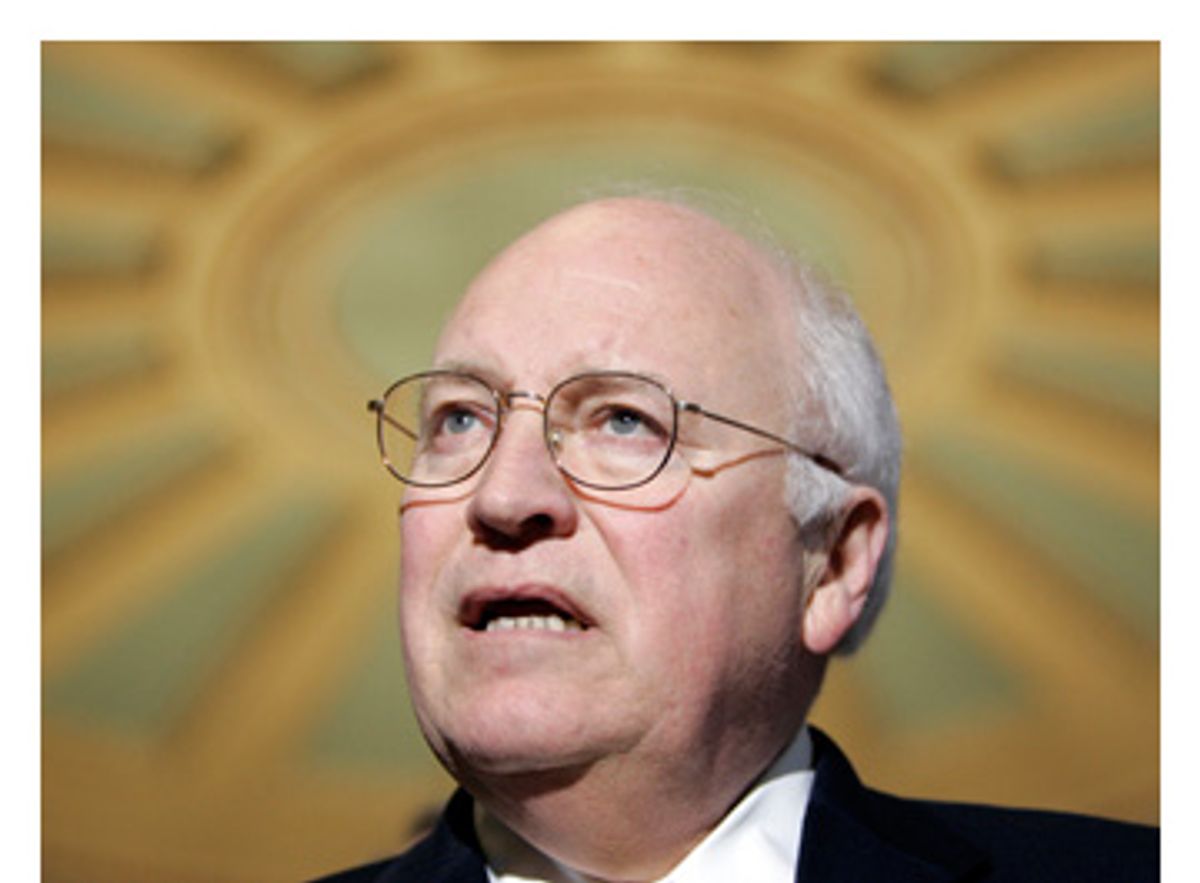 When Huey P. Long left the governorship of Louisiana in 1932 to become a U.S. senator, he filled the position with a childhood friend named Oscar Kelly Allen, known as O.K., who gave the OK to whatever the Kingfish wished. The story is still told, perhaps apocryphal, that one day a leaf wafted through an open window and landed on O.K.'s desk and, without hesitation, he signed it.

Two months after 9/11, on the day of the fall of Kabul, Afghanistan, Nov. 13, 2001, Vice President Dick Cheney appeared in the Oval Office with a four-page executive order designating terrorism suspects as enemy combatants to be held indefinitely, with no right to have their detention reviewed by any court except newly created military commissions, where they would not be permitted to learn the accusations or evidence against them, or be represented by counsel, or even know that their case had been heard and decided.

The secretary of state and the national security advisor were deliberately kept uninformed as the White House staff secretary prepared the order for signature. According to a four-part series published this week in the Washington Post on the extraordinary power of the vice president, "When it [the order] returned to the Oval Office, in a blue portfolio embossed with the presidential seal, Bush pulled a felt-tip pen from his pocket and signed without sitting down. Almost no one else had seen the text." Colin Powell was stunned when he learned of the fait accompli. "What the hell just happened?" he asked. Condoleezza Rice was described as "incensed." But neither of them, then or later, effectively challenged Cheney's usurpation of executive authority. And, as can be gathered inferentially, Bush never bothered to ask Cheney about their opinions on the executive order or to call them; nor did he seem to care.

The Washington Post series, written by Barton Gellman and Jo Becker, is an acknowledgment, after more than six years, of the hardly secret scope of Cheney's unprecedented influence. The articles provide fresh detail of his elaborate network within the federal government and how he pulls its strings. On principle, Cheney and his aides are hostile to regular lines of authority set up to enforce professional standards and a responsible chain of command. Having served as President Ford's chief of staff, he understood intimately how control of the paper flow meant control of the decision making. In 1999, the Post reported, Cheney explained to a conference of presidential historians: "The process of moving paper in and out of the Oval Office, who gets involved in the meetings, who does the president listen to, who gets a chance to talk to him before he makes a decision, is absolutely critical."

Cheney has crushed the normal interagency process that permitted communication, cross-fertilization and cooperation at the sub-Cabinet level through all previous modern administrations. At the same time, he has isolated Cabinet secretaries, causing them to be fired when they contradicted him, as he did with Christine Todd Whitman, former head of the Environmental Protection Agency, and former Secretary of the Treasury Paul O'Neill.

Cheney thrives in darkness, operating by stealth within the government, and makes a cult of secrecy. None of these insights are new, except for additional telling details. Reports the Post: "Man-size Mosler safes, used elsewhere in government for classified secrets, store the workaday business of the office of the vice president. Even talking points for reporters are sometimes stamped 'Treated As: Top Secret/SCI.'"

The Post series appeared just as Cheney refused to provide his office's documents to the National Archives and Records Administration as provided by law. He then attempted to abolish the specific agency within the Archives to punish it for its impudence. Cheney's chief of staff and former counsel, David Addington, floated the novel doctrine that the vice president is not "an entity within the executive branch." He claimed that the Archives had no authority and that therefore it "is not necessary in these circumstances to address the subject of any alternative reasoning." Only when Rep. Rahm Emanuel, D-Ill., proposed cutting off the vice president's $4.8 million in executive-branch funding did Cheney concede.

Despite the absurdity of Addington's argument, Cheney has a point, though not a constitutional one. He has transformed an office that Franklin D. Roosevelt's first vice president, John Nance Garner, said was "not worth a bucket of warm piss" into one of vast power. Cheney has acted as the Stalin of the Bush administration, the master of the bureaucracy, eliminating one rival after another, ruthlessly and unscrupulously concentrating power, the culmination of a more than 30-year career. The Post articles are based on information provided by dissidents who have suffered at Cheney's hand and have given Post reporters stories proving that Cheney's whole point is power.

Rather than transcending the executive, Cheney has deranged it in his effort to remake it into a branch of government of unlimited, unaccountable power. The head of the search committee who chose himself to be the experienced vice president to a callow president saw in George W. Bush his opportunity radically to alter the place of the executive within the federal government, which he had been straining to do since he served as Donald Rumsfeld's assistant in the Nixon White House. Cheney has viewed recent American history as a struggle between the imperial presidency necessary in a brutish world and the naive, undependable and in some cases disloyal constraints of Congress, the press and the judiciary. Under Bush, Cheney has shaped the presidential prerogative, acting as "an entity within the executive branch." Secrecy is essential to the protection of presidential prerogative. Follow the paper trail to the Mosler safe.

Even as the spotlight shines on the opaque Cheney, the light reflects on others as well. By shielding Bush from alternatives, Cheney has locked in certain decisions that Bush stubbornly defends as his own. The president's plight is not that of a removed ruler tragically kept from knowing what his government is doing in his name. He has had time to observe the consequences. He is aware of what Cheney says to him. The Decider decides that Cheney will decide what the Decider decides. This is not a case of if-only-the-czar-knew. In the seventh year of his presidency, Bush's decision making consists of justifying his previous decisions.

Of the Bush Cabinet secretaries, former Attorney General John Ashcroft most strenuously confronted Cheney about his seizures of power. Ashcroft was perhaps the most conservative member of the Cabinet, and it was out of a sense of his own constitutional obligation that he objected. When Ashcroft discovered that John Yoo, the deputy assistant in the Justice Department's Office of Legal Counsel, had been recruited by the Cheney operation to write memos on detainee policy that would deny any role in the new legal process to the Justice Department, he was outraged. At the White House he confronted Cheney and Addington. "According to participants [at the meeting]," the Post reported, "Ashcroft said that he was the president's senior law enforcement officer, supervised the FBI and oversaw terrorism prosecutions nationwide. The Justice Department, he said, had to have a voice in the tribunal process." But Cheney did not relent. Ashcroft received no meeting to discuss the matter with Bush. Cheney was the gatekeeper -- the decider for the Decider.

The narrative of Powell's internal struggle with Cheney remains largely unknown. From conversations I have had with former senior CIA officials, it is clear that Powell himself does not fully understand all the ways he was misled, manipulated and abused in order to get him to make the case for the invasion of Iraq. To this day, Powell still does not really know what the CIA and the White House knew about weapons of mass destruction and when they knew it, largely because Cheney was so successful in his rigging of the intelligence process.

Powell's performance on NBC's "Meet the Press" on June 10 demonstrated his continuing confusion. He wondered why the CIA didn't tell him before his speech to the United Nations on Feb. 5, 2003, that the intelligence on mobile weapons laboratories wasn't solid, even now unaware that CIA director George Tenet had been informed by CIA officers but dismissed their information because it ran counter to the case the administration wished to make for going to war.

Powell was caught between his diminished self-image as a loyal aide and good soldier indebted to a coterie of Republicans who had promoted him eventually to secretary of state, and his grandiose self-image as the most respected and popular public man in the country, and his influence imploded. He was strangely incapable of gaining political traction to hold his ground. Now the record cannot be changed. He can only learn how easily Cheney toyed with him.

Curiously absent in the lengthy Post articles, except in one brief passing scene, is Cheney's ubiquitous shadow in his shadow presidency -- his former chief of staff, I. Lewis "Scooter" Libby. Obsessed with secrecy, Cheney ordered Libby to ensure that one national security secret became public -- the identity of Valerie Plame Wilson as a covert CIA officer. Now convicted on four counts of perjury and obstruction of justice, Libby awaits word from the federal appeals court on whether he will be able to stay his 30-month prison sentence. Steadfastly refusing to cooperate with the prosecutor, he continues his obstruction, protecting his principal. "There is a cloud over the vice president," said Patrick Fitzgerald, the special prosecutor, in his closing remarks to the jury. "And that cloud remains because this defendant obstructed justice."

Despite the recent round of punditry that Cheney's influence has waned, he remains a formidable force. These are Cheney's final days; this is his endgame. He will never run again for public office. He is freed from the constraints of political consequences. He now has no horizon. He lives only in the present. He is nearly done. There are only months left to achieve his goals. Mortality impinges. Next month, he will have his heart pacemaker replaced. He disdains public opinion. He does not care who's next. "We didn't get elected to be popular," he said on Fox News on May 10. "We didn't get elected to worry just about the fate of the Republican Party."

To the last minute, Cheney refuses to loosen his grip on power. Meanwhile, his former aides pump up pressure for a presidential pardon -- a pardon that would enshrine Libby's obstruction of justice and shield Cheney forever, "an entity in the executive branch" who would be above the law. A breeze is blowing a leaf toward an open window of the Oval Office.