Bush and Cheney walk, too

Even as the president confesses that Scooter Libby engaged in a cover-up -- after all, that was the verdict -- he completes the ultimate obstruction of justice in the Plame affair. 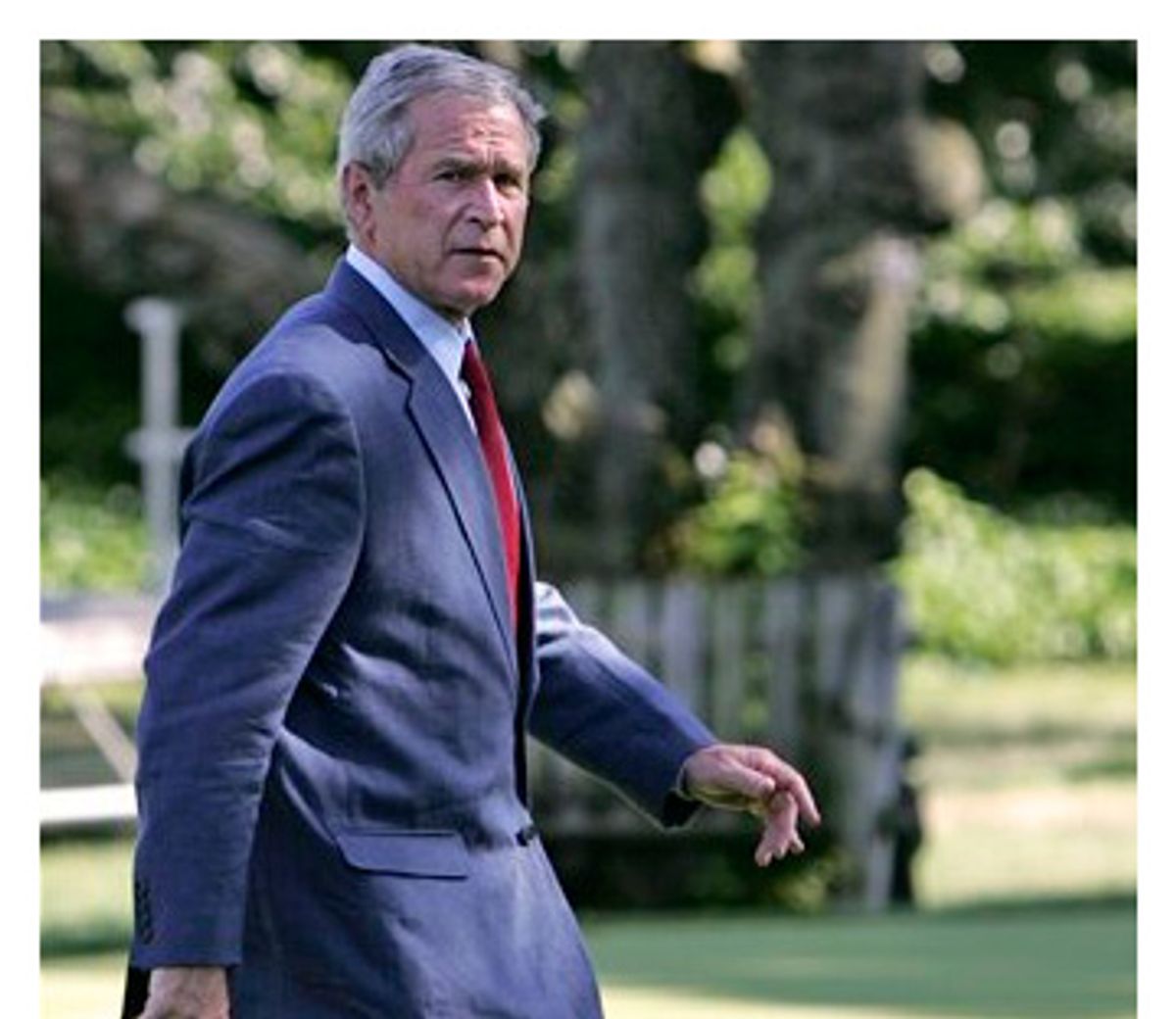 In the Plame case, as in nearly every matter, Vice President Dick Cheney controlled and directed the flow of information that shaped the decision making of President George W. Bush. When Nicholas Kristof, the New York Times columnist, published "Missing in Action: Truth," on May 6, 2003, referring to but not mentioning by name former Ambassador Joseph Wilson as one who conducted a mission to Niger, where he found no evidence of Saddam Hussein seeking to purchase yellowcake uranium for nuclear weaponry, Cheney furiously launched the effort to discover Wilson's identity and to discredit him. He ordered I. Lewis "Scooter" Libby, his chief of staff, to head the operation. Libby's frenetic activity triggered a secret State Department investigation and memo that identified Wilson's wife, Valerie Plame, as a covert CIA operative.

Cheney aroused President Bush to the danger from Wilson. A handwritten note by Libby that surfaced in his trial revealed that Bush raised his concern about the Kristof column in a subsequent June 9 meeting. The next day, the State Department memo "Niger/Iraq Uranium Story" began circulating within the administration. On June 12, Cheney identified Plame to Libby, and Libby went hard to work. Within three days, he discussed Plame with five officials. On July 6, after Wilson published a New York Times op-ed disclosing that the rationale the president gave for the war was premised on false information, an enraged Cheney ordered Libby into high gear. Cheney also secured Bush's concurrence for Libby to leak selected parts of the still-classified National Intelligence Estimate on Saddam's weapons of mass destruction to New York Times reporter Judith Miller on July 8. Bush, therefore, was deeply involved. But what did the president know, and when did he know it?

Bush's commutation of Libby's 30-month prison sentence for four counts of perjury and obstruction of justice was as politically necessary to hold his remaining hardcore base for the rest of his 18 months in office as it was politically damaging to his legacy and to the possibility of a Republican succession. It was also essential in order to sustain Libby's cover-up protecting Cheney and perhaps Bush himself.

The sole reason that Bush offers for the commutation -- that Judge Reggie Walton's sentence was "excessive" -- is transparently false. Indeed, the sentence meets the normal guidelines for such a crime. "The sentence in this case was imposed pursuant to the laws governing sentencings which occur every day throughout this country," said Patrick Fitzgerald, the special prosecutor. "In this case, an experienced federal judge considered extensive argument from the parties and then imposed a sentence consistent with the applicable laws." Nothing is irregular or extraordinary about the length of the sentence, except the person receiving it.

It was not the judge who exceeded the sentencing guidelines; it is the president who ignored federal standards for commutations, by which it is customary that the convicted person serve some time before being eligible. Dishonestly appealing to the letter of the law, Bush's spirit of impunity is masked as benevolence and mercy.

Even as Bush attacked the judgment of Walton, his own appointee to the federal bench, he acknowledged Libby's guilt, declaring: "I respect the jury's verdict." Even as Bush engages in juridical nullification, he does not seek jury nullification. By confessing that Libby was engaged in a cover-up -- after all, that was the verdict -- Bush establishes his own motive. In brief, Bush's act ratifies Libby's cover-up. The "cloud over the vice president" that the prosecutor decried will never be dispelled. Cheney -- and Bush -- walk, too.

Libby had to have understood, without a word ever being passed, that leniency of some sort would be granted. His steadfast cover-up was encouraged by his intimate knowledge of the methods of Cheney and Bush. The fine he must pay -- $250,000 -- is meaningless because he will certainly not be paying it himself. His legal defense fund, supported by the friends of the president and vice president, boasts a treasury of $5 million. He has been well taken care of.

The pardon is the one monarchical power that the framers of the Constitution assigned the presidency. But they placed one restriction, that it could not be exercised for impeachment. In other words, the president could not use his power to pardon himself. Bush is entirely within his narrow right to use the pardon power in the Libby case. But it violates the spirit, if not the letter, of the law governing that power because it is a consummate gesture of self-exoneration, at least if the vice president is an "entity within the executive branch." Bush rewards Libby's cover-up, thwarting the investigation into Cheney's and perhaps his culpability. Bush's commutation is the successful culmination of the obstruction of justice.

Since 1776, on every July Fourth, the Declaration of Independence has been posted in public places, published in newspapers and read aloud. Its bill of particulars contains these two passages defining royal tyranny and justifying revolution:

He has obstructed the Administration of Justice by refusing his Assent to Laws for establishing Judiciary Powers. ... For taking away our Charters, abolishing our most valuable Laws and altering fundamentally the Forms of our Governments.