With thoughts of a future 9/11, and a sober assessment of the chaos in Iraq, the Democratic candidate is selling his foreign policy know-how. 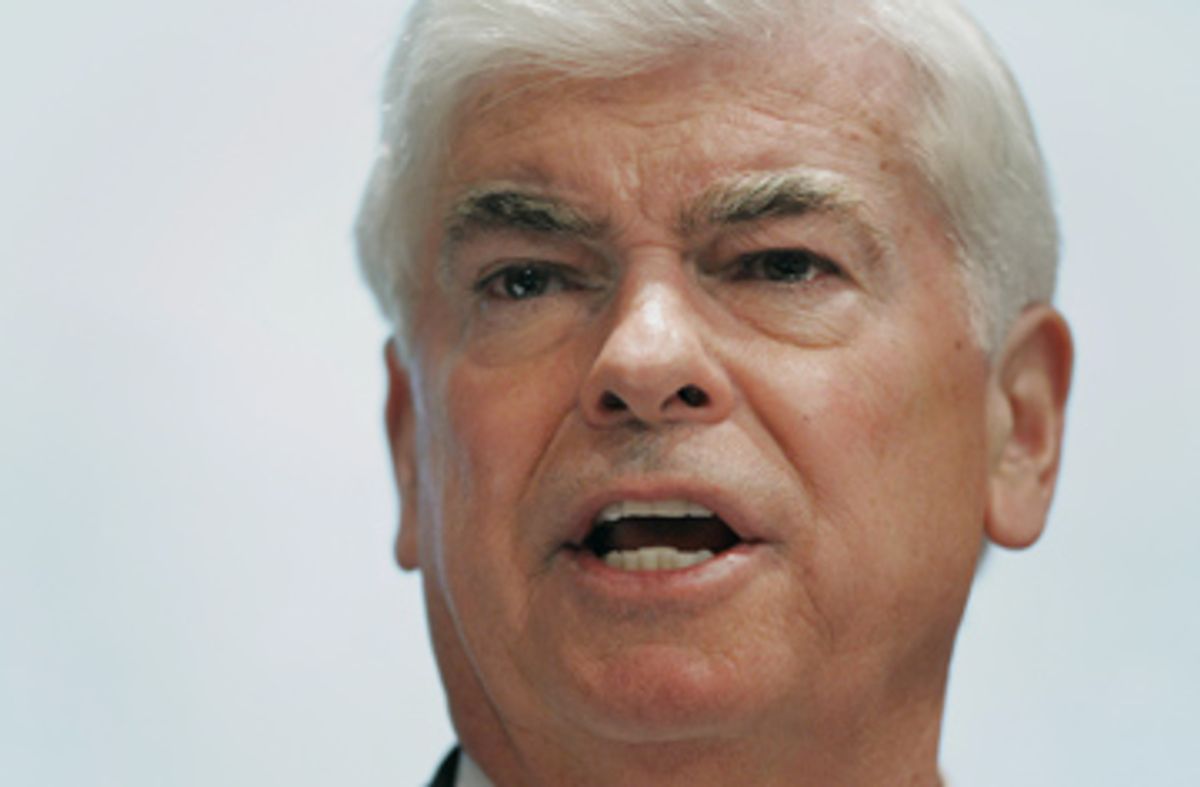 As the campaign bus emblazoned with his name and slogan ("Leadership When America Needs It Most") barreled through the Iowa darkness Thursday night, Chris Dodd leaned forward to explain why -- the polls be damned -- this was his moment.

"I am feeling comfortable with who I am," said the 63-year-old, five-term Connecticut senator in a full-throated, resonant voice. "And I've reached a level of maturity and a comfort level with where I stand and what I believe in. And I'm convinced [after Sept. 11] that the American public believes that experience matters."

It was fitting that the last stop of the evening was Mason City, the hometown of Meredith Willson, the composer of "The Music Man," musical theater's celebration of Iowa and heartland optimism and the belief that a fully outfitted marching band can be conjured from nothing. For Dodd with his thatch of white hair, ruddy complexion, easy laugh and back-slapping manner is a "76 Trombones" kind of presidential candidate. Even though he collected only $3.2 million in the second quarter (one-tenth of what Barack Obama raised), Dodd tries to make up for this shortfall with the kind of zest for politicking that is difficult to fake over a 15-hour campaign day.

Arriving at an afternoon picnic Thursday in Waverly, Iowa, Dodd did not appear at all dismayed to discover that there were more people getting off his campaign bus than voters awaiting him on the banks of the Cedar River. With the help of his second wife, Jackie Clegg Dodd, and his late-in-life two young daughters (5-year-old Grace and Christina, who is 2), the candidate instead turned this dud event into an exuberant family outing. While Jackie was speaking, she paused mid-sentence to announce, "I think we have a diaper lost here," before rushing over to tend to Christina.

In fact, in his speeches, Dodd regularly gets a laugh with the crack, "I'm the only presidential candidate who gets mail from AARP and diaper services."

But Dodd, a longtime member of the Senate Foreign Relations Committee, is unabashedly serious about the war in Iraq -- and is a more outspoken advocate of getting out now than his Senate rivals for the nomination (Obama, Hillary Clinton and Joe Biden). After a withdrawal timetable was stripped from the recent Iraq war appropriations legislation, Dodd led an unsuccessful effort to muster a strong Democratic vote against it, though he did win the backing of Obama and Clinton. Asked in Waverly about the failed appropriations vote, Dodd said ruefully, "Candidly, I thought we'd get more support than the 11 votes we got. I was very disappointed that we didn't say no to that supplemental. And with each opportunity [to press for withdrawal], I think the numbers would increase."

Dodd is also close to admitting that the Iraq war is an unalterably lost cause. As he put in our interview, "I just think that we are just delaying the inevitability that this is going to break down into a continued chaotic situation." He indicated that the only residual troops that would be left in Iraq in a putative Dodd administration would be there to defend the American Embassy, a position analogous to that of Bill Richardson. But Dodd even hinted at doubts whether the United States could maintain an embassy if it withdrew its forces to bases in Qatar and Kuwait.

The son of a senator (Tom Dodd), who was censured for financial irregularities in 1967, Chris Dodd was elected to Congress in 1974 and the Senate in 1980. Along with Biden and Richardson (the New Mexico governor who has served in the U.S. House and the Clinton Cabinet), is facing the most perplexing aspect of the 2008 Democratic race -- the surprisingly diminished role of a résumé. After the terrorist assault on 9/11, it became a truism of politics that never again would either party nominate a presidential candidate who is not grounded in foreign policy. Yet the three leading candidates for the Democratic nomination have collectively spent a total of 15 years holding federal public office.

This is one of Dodd's calling cards. "In light of what we've been through the past six years, I think experience matters all across this country," he said in Waverly. "You want to know that if you get this job, you'll know what to do with it, how to bring people together to make a difference." In Mason City the next morning -- appearing with Paul Simon before more than 100 Democrats crammed into a small room in the Country Kitchen restaurant -- Dodd again evoked Sept. 11, when he said, "Something may happen on January 21, 2009, that none of us can imagine here today. That person sitting in the White House, how will they respond to that? What is their proven experience?"

Almost every candidate in the Democratic sweepstakes has a formative experience, a touchstone that they use to explain their biography and their values. For John Edwards, it was growing up in modest circumstances in the Carolinas. For Obama, it was his years as a community organizer in Chicago. Dodd's version of Rosebud was his two years in the Peace Corps in the 1960s in the Dominican Republic, an experience that bequeathed him fluent Spanish, a concern for Latin America (during the 1980s he was a major opponent of aid to the contras in Nicaragua) and an abiding belief in the value of national service.

Dodd's signature proposal in this campaign is his plan for a vastly expanded (eventually reaching 1 million slots) and a doubling of the size of his beloved Peace Corps. Talking about national service to 30 Democratic activists meeting in a realty office in Charles City, Iowa, Dodd evoked the memory of an imaginary "kid from a farm in Iowa and a kid from Hartford, Connecticut, coming together in a foxhole in December 1944 in the Battle of the Bulge and forging a relationship that never changed the rest of their lives. A shared experience of coming together as Americans to take on a challenge and defeat it."

Probably more than any other candidate in the race -- more even than Biden, a fellow Irish Catholic -- Dodd is an old-time Northeastern liberal. Yet while the memories of Michael Dukakis' and John Kerry's failures to click emotionally with ordinary voters make some Democrats wary of all presidential candidates from New England, Dodd's natural exuberance may transcend this regional curse. The senior senator from Connecticut is the sort of warm-blooded politician who could connect with a cigar-store Indian.

At a noontime rally Friday before a crowd of about 200 in Fort Dodge, Dodd stood next to Paul Simon and joked, "My name is Art Garfunkel. You may not recognize me. My hair has changed a little." Then Simon treated the Iowans to a 15-minute mini-concert of old Simon and Garfunkel favorites. Perhaps in deference to Dodd's lagging position in the Democratic field, Simon did not sing "Bridge over Troubled Waters."