Hillary is from Mars, Obama is from Venus

In the Democratic presidential pack, the leading man is a woman and the leading woman is a man. 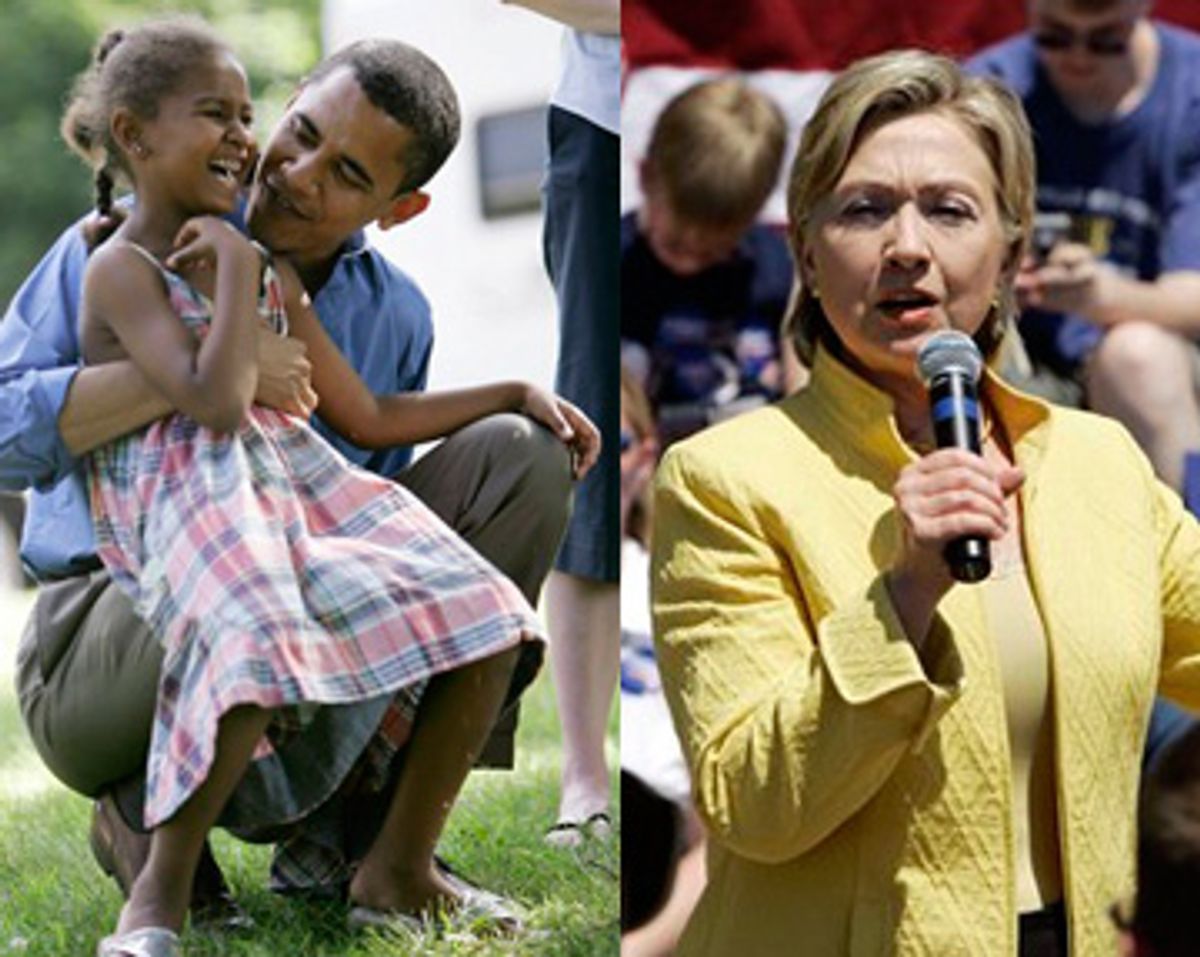 At first listen, the Indigo Girls don't make any sense, not for the hyper-macho world of a presidential campaign, much less a summertime rally for a superstar like Barack Obama. But his sound people are piping in the feminist folk duo's music anyway to pump up a crowd of hundreds at this small-town coffee shop on the Fourth of July. They play "Hammer and a Nail," a 1990 declaration of female empowerment and emancipation. "You've got to tend the earth," the Girls sing, "if you want a rose."

Then Obama comes out, looking lithe and dashing, with his 6-year-old daughter, Sasha, in his arms. The soundtrack starts to make sense. "I'm a sucker for girls," says the man who wants to be president. "There is nothing more difficult than me being on the phone hearing about their soccer game, hearing about what happened to them in school and knowing that I am not there in the evenings to share a lot of their life." He turns to his wife, Michelle, who is sitting nearby on a stool. "She is smarter," he says. "She is tougher."

Throughout history, American presidents have been men's men who puff their out chests against evil. Think Teddy Roosevelt on safari, Jack Kennedy in PT-109, Ronald Reagan on his horse, or George W. Bush with a chain saw clearing brush. If leaders show any slackening of testosterone, especially in wartime, they are quickly derided as wimps (George H.W. Bush), a Frenchman (John Kerry) or weaklings (Jimmy Carter). But on the Democratic campaign trail these days, where the first woman in U.S. history is making a serious run at the White House, gender roles are being swapped.

When Obama travels the country, he does not appear to worry much about posing with guns or wearing those khaki workman jackets that made Kerry look so silly in 2004. Instead, he sings an empowerment ballad on the stump that would make most lady folk singers proud. "The decision to go to war is not a sport," he tells crowds, rejecting the male metaphor. "We can discover the better part of ourselves as a nation," he says. "We can dream big dreams."

In contrast, Hillary Clinton has run her campaign with all the muscular vision and authority of the macho candidates of yesteryear. "I've seen her stand up to bullies," announced Christine Vilsack, the former first lady of Iowa, when she introduced Clinton at a rally in Des Moines last week. On the stump, Clinton repeatedly tells people that they should let her take control of the country, eschewing Obama's more abstract calls for national soul-searching. "If you are ready for change, I am ready to lead," she says. "I want to be the president who sets goals again."

Clara Oleson, an Iowa Democrat and former labor lawyer, explained all these distinctions on a riverbank in Iowa City last week, while waiting to hear Clinton speak to a crowd of about 1,000. "Obama is the female candidate. Obama is the woman," she said, after admitting that she was one of his supporters. "He is the warm candidate, self-deprecating, soft, tender, sad eyes, great smile."

So what does that make Hillary Clinton? "She is the male candidate -- in your face, authoritative, know-it-all." To be clear, Oleson was not doubting the symbolic power that Clinton retains as a woman. But she was calling it as she saw it, using the language of Iowa City, a university town. "It's what the academes would call the difference between sex and gender," Oleson explained.

Academics, in fact, have long defined gender as a culturally constructed concept that exists independent of the human body. Though the terms "masculine" and "feminine" are not easy to define, they indisputably represent clear battle lines in presidential politics. Gendered differences have played central roles in the last two presidential elections, with Republican leaders making a concerted effort to claim the masculine high ground, by branding the GOP as the party of dominance, or what the linguist George Lakoff calls the party of the "strict father." Democrats, on the other hand, have classically approached politics as what Lakoff calls the "nurturant parent," with far more interest in the caretaking role of government, adopting more feminine positions on helping the underprivileged and choosing diplomacy over conflict.

Within the Democratic field, however, the interplay of gender is far more complex. Clinton, as the first woman front-runner, finds herself in a particularly difficult position, say political scientists who cover the politics of sex. She can clearly benefit from her status among Democratic women voters, who polls show disproportionately support her candidacy. But she must also be careful to avoid gender traps, like the question famously put to vice presidential candidate Geraldine Ferraro in 1984: "Are you strong enough to push the button?" She must also avoid the pitfall of congresswoman Pat Schroeder, who teared up in 1987 when she announced that she would not run for president. ("She cried," announced the New York Times two days later.)

"The first woman absolutely has to out-masculine the man, kind of like Margaret Thatcher did," says Georgia Duerst-Lahti, a professor at Beloit College who has written extensively on gender in presidential politics. "Men have a lot more latitude. Just think about Ronald Reagan when he would tear up. Could a woman ever tear up? No. But a man can tear up."

Clinton deals with this dilemma in the classic Clintonian fashion, effectively forging her own third way. "We have the chance to make history together and elect the first woman president of the United States," she said to wild cheers in Iowa City on July 3. But then Clinton immediately hedged herself, with a metaphor that calls to mind troops parachuting into battle or train jumpers hopping a freight. "I am not running because I am a woman," she continued. "I am running because I think I am the best qualified and experienced person to hit the ground running in January 2009."

Obama, who currently trails Clinton in the polls, especially among working-class women, has run a campaign that is virtually free of macho symbolism. He is, instead, a self-consciously inspirational candidate, who is always talking about things like coming "together for a common purpose." While the Indigo Girls are not part of the standard song list at Obama events, the official tunes, which include Aretha Franklin's "Think" and the disco anthem "Ain't No Stopping Us Now," fail to exude any overt appeal to manliness.

Right on cue, after Obama finishes speaking at the coffee shop here, Franklin's 1968 anthem for independent women begins blaring from the speakers. "Think about what you're trying to do to me," she sings. Obama dives into the crowd with his trademark touchy style, shaking each voter with his right hand while laying his left hand compassionately on their shoulder. "I am really impressed with his ability to articulate issues and just his sheer graciousness," says Julie Hansen, a local librarian who was waiting to meet the candidate. "He'll try to put people at ease. He has a grace. He has a warmth."

Nonetheless, she remains on the fence, torn between the two front-runners. She says she liked the mastery of issues and authority that Hillary Clinton has demonstrated in the debates. Plus there is the history-making potential. "She is a woman," Hansen adds. "And I want to support that."

In a few words, this Iowa voter had epitomized the struggle now playing out between the top two Democrats nationally. They are fighting for undecided female voters who are attracted by Obama's feminine appeal, but still drawn to the macho performance of the only woman to ever have a real shot at the Oval Office.

May the best woman win.