Salon's Washington correspondent responds to letters about his article "Hillary Is From Mars, Obama Is From Venus." 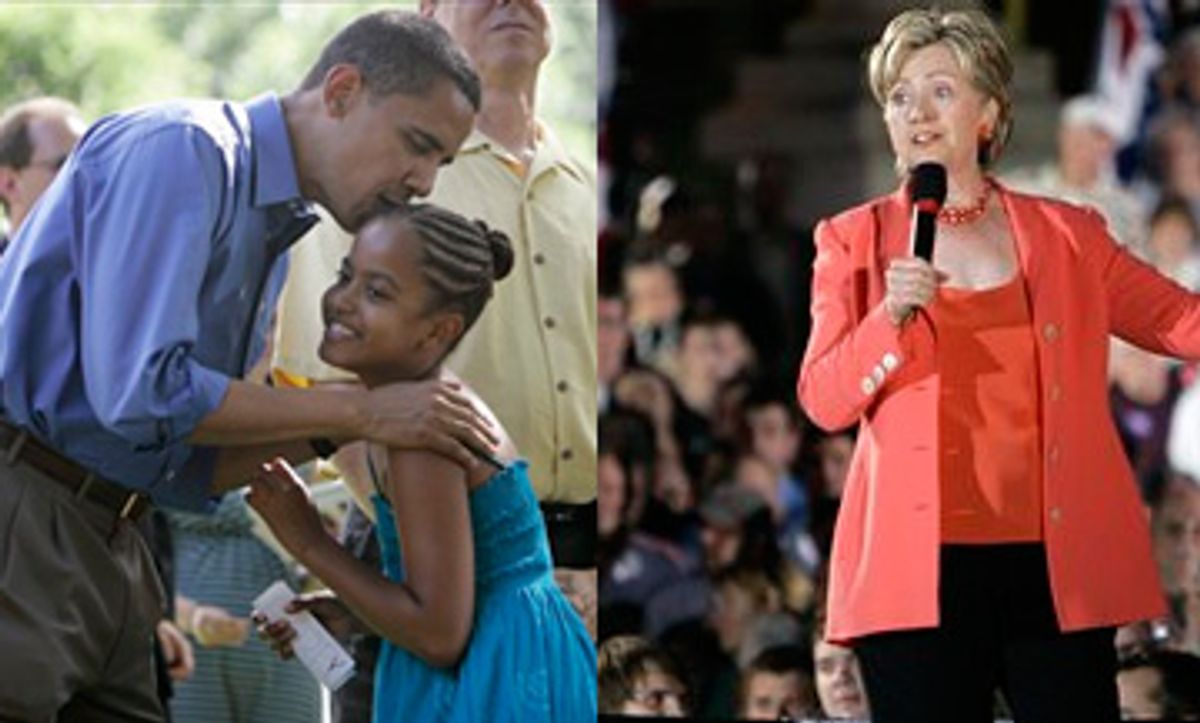 I expected my article "Hillary Is from Mars, Obama Is from Venus," which is about gender roles and Democratic presidential candidates, to be provocative. But I had no expectation that it would trigger such rage from so many of Salon's readers. As of 10:30 EST on Thursday morning, the article had received 71 letters, almost all of them negative.

It was derided as "lame," "stupid," "brain dead," and "PR fluff," among other things. One writer accused me of attempting "to rip Obama's nuts off and pin em' on Hillary." Many critics said that discussions of gender roles on the campaign trail are too superficial to warrant space in a serious publication. At least as many accused me of feeding the Republican attack machine. "Karl Rove couldn't have done it better himself," wrote one. "Way to feed the lines to the Fox News crowd," wrote another. Perhaps the most eloquent denunciation along these lines came from a reader with the handle "jamartinjr."

"Being a woman isn't bad when you are a woman," jamartinjr wrote. "When you are (hopefully) as a party trying to shed the 'wussy' label that both the jock sniffing press (Chris Matthews, et al) and the proto facist right wing talk radio types, having your only viable male candidate called a woman is a huge problem."

As I read through the comments, I was struck by how many readers assumed that the article was an attack on Barack Obama. By highlighting the unconventionally feminine qualities of his campaign style, it was assumed that I was questioning his presidential timber, his strength or his electability. I certainly did not intend this. In fact, two of the named sources for the article were Obama supporters, who pointed to these qualities as a reason for his appeal. I thought I was highlighting one of his unique assets.

But the confusion between what I meant and what readers thought I meant is a cause for concern. So please allow me to try again.

The idea for this piece originated last Tuesday when I was in Iowa City, working on another piece about Hillary Clinton campaigning with her husband, Bill. Before the event began, I fell into conversation with a group of Democrats, including one man in an Edwards campaign T-shirt, and a woman, named Clara Oleson, who identified herself as an Obama supporter. They had just been discussing the gender-bending qualities of the Obama and Clinton campaigns between themselves. "Obama is the female candidate. Obama is the woman," Oleson, the Obama supporter, told me. "She is the male candidate."

I found her insights, which were a more positive version of related takes by columnists like Maureen Dowd, at once intriguing and a bit funny, and I kept thinking them through over the next couple of days, as I watched Clinton and Obama perform their stump speeches. It did not take me long to realize that her thesis was easily confirmed by the rhetoric and campaign styles of both candidates. What's more, I found other Obama supporters who echoed her sentiment. After I returned to Washington, D.C., I read up on the history of gender roles in presidential politics, and spoke to a couple of academics who study the subject.

The first important point to make, which I tried to make in the story, is that gender is not the same as sex. A man is a man whether he (like me) enjoys the Indigo Girls or (unlike me) collects Toby Keith records. A woman is a woman whether she drives a semi or collects Barbies. Though gender roles tend to be adopted by people of a certain sex, the two descriptors operate independently of one another. But here is where I may have made a mistake. The headline of my story, the final sentence and Oleson's quote call Obama a woman. I assumed that, in the context, readers would see this as the hyperbole it was, a provocative exaggeration to prove a point. I obviously was wrong. To clarify, Obama is not really a woman. Hillary Clinton is not really a man.

But it is also true that gender roles are still enormously important in politics, as I also tried to explain in the piece. No one seems to doubt this. Many of my critics point out that Republicans have had some success in recent years attacking Democrats as unmanly. At the same time, the Republican presidential field has an almost laughable (and rather pathetic, for my tastes) obsession with masculinity, about which I have written. So I found it newsworthy that the top two contenders in the Democratic field are both flouting their expected gender roles.

This all raises an interesting question, which I did not discuss in the original article, but which most of my critics raise. Is it possible to describe these gender-bending roles, or the concept of gender in politics at all, without playing into the hands of the Republican attack machine? Do Ann Coulter, who hurls gay slurs at John Edwards, and Rush Limbaugh, who decries daily the wussification of America, have a monopoly on this discussion?

Obviously, many Salon readers believe that any discussion of gender, especially one that posits a Democrat as feminine, is a recipe for Republican victory. I am not so sure. The current President George W. Bush is a model of dopey machismo. He is inarticulate. He walks with a swagger. He starts wars. He doesn't like diplomacy. He clears brush. Yet, according to the latest polls, less than three in 10 Americans think the guy is a good president.

At the same time, there are a number of examples of strong, feminine and female role models who have filled the vacuum caused by his failure. The most prominent is House Speaker Nancy Pelosi, who regularly polls a bit higher than Bush. She rules Congress with an iron hand, but in an unfailingly maternal way, it seems to me, frequently mentioning her role as a grandmother, and famously surrounding herself with children during her swearing-in ceremony. Antiwar activists like Code Pink have also defined a model of ladylike power in recent years. Then there are the growing ranks of feminine and female leaders in Washington, from Condoleezza Rice to Sens. Barbara Boxer, D-Calif., and Amy Klobuchar, D-Minn.

So I wonder if Obama's moves in this direction are not in fact a smart thing. He is, after all, running a transformative campaign to change politics and replace the failed machismo of President Bush with something more hopeful and collaborative. But then I may also be wrong. Maybe the more macho candidate always wins. Maybe Ann Coulter and Rush Limbaugh are right to harp on the lack of blockhead testosterone in the Democratic field. It will be up to the voters to decide. In the meantime, I will be traveling the country to write about what I see happening on the campaign trail. I am not perfect, but I welcome the continued criticism, and take it seriously.

I guess I will end with some questions for those who gave me feedback. Would it be better for Democrats to simply block out of their minds the gendered politics that under-gird the presidential election, even if voters are talking about them on the trail? And if not, why not confront these politics head-on? Why not ask the question directly: What's so great about electing a president because he claims to have the most machismo? Over the last six years, at least, most Americans think this approach has not worked so well.

Until the next story,