A spate of e-mail etiquette guides and productivity manuals commands us to clear out our e-mail. Don't we all have better things to do? 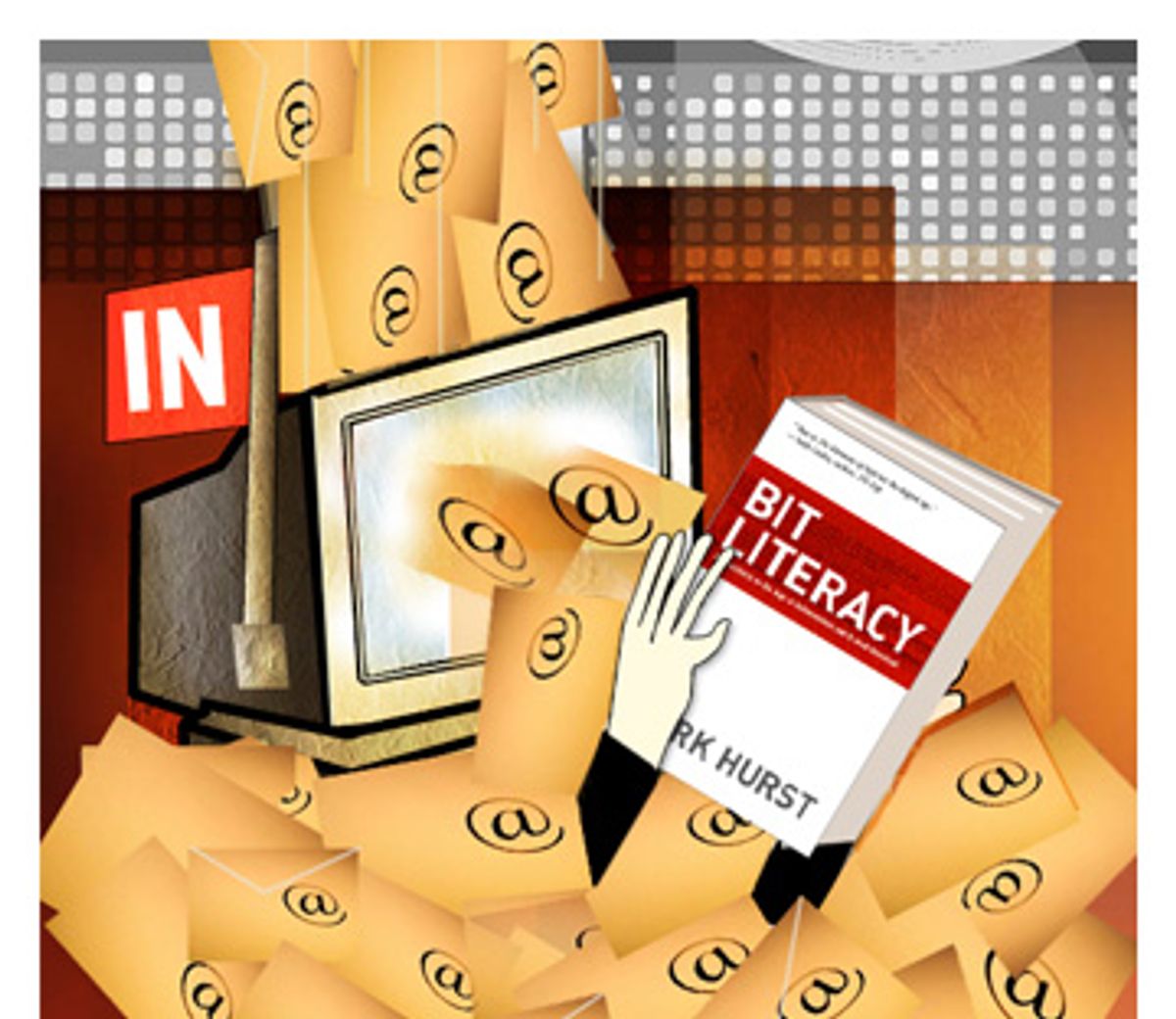 The world discovered that e-mail was useful around 1993. In a then-celebrated New Yorker article, writer John Seabrook described how he was able to exchange words with Bill Gates just by typing the billionaire's address into his computer! Overnight, we faced new opportunities, like easier telecommuting and cute e-mail handles, as well as new perils, like the mistaken "reply to all" or the corporate e-mail that lands you in jail.

How would we negotiate this unfamiliar terrain? A spate of "netiquette" books arrived to help, with marching orders: Never e-mail drunk or angry. Don't type in all caps. Delete all come-ons from Nigerians with formal salutations and fortunes to bestow.

Good advice -- but most people were too busy forwarding risqué jokes and hunting down old high school friends to bother with it. Who needed etiquette tips? E-mail was everywhere; we were swimming in it.

Now, it seems, we're drowning. There's simply too much e-mail. The tide of spam buries valuable messages. Attachments clog our Net connections when we don't want them, then disappear when we need to find them again. And, too often, incoming messages present social and business dilemmas that simply didn't exist in the days before e-mail.

We need help. And so, a decade later, e-mail manuals have returned. But instead of being field guides to a new frontier, today they are survival manuals for the overgrown informational jungle that so many of us inhabit.

Leading this pack is "Send: The Essential Guide to Email for Office and Home," by David Shipley and Will Schwalbe, a slender, literate volume that is positioned as a Strunk and White for e-mail. Shipley edits the New York Times Op-Ed page, and Schwalbe is editor in chief of Hyperion Books; this places both of them on the professional receiving end of fire-hose-volume e-mail streams. But coping with overflow isn't their focus. Instead, they aim to help readers understand the peculiar nature of e-mail, behave decently and avoid sundry faux pas.

"Send" provides mountains of good advice: how to hit the right note of familiarity with a stranger. What to do about the awful "notify sender" request. (Don't use it!) What you should do when you're "hideously late" with an answer. (Better to reply, no matter how long it's been, than not to.) Why e-mail-borne sarcasm flops.

E-mail hangs unfamiliarly between the formality of written missives and the immediacy of voice, and that opens some pitfalls. For anyone in need of an introduction to them, or a refresher, Shipley and Schwalbe provide one, wittily and painlessly. This passage, for instance, is a perfect summary of the form's emotional opacity: "If you don't consciously insert tone into an email, a kind of universal default tone won't automatically be conveyed. Instead, the message written without regard to tone becomes a blank screen onto which the reader projects his own fears, prejudices and anxieties."

"Send's" recommendations ultimately boil down to a sort of Golden Rule for e-mail: "Think before you send. Send email you would like to receive." This exhortation echoes Postel's Law, a famous (among geeks, at least) principle of network engineering that underlies the technical design of the Internet itself: "Be conservative in what you do; be liberal in what you accept from others."

But the biggest problem most users face today is that we are way too liberal in what we accept from others -- and we rarely have a choice. "Send," beyond advising us not to waste other people's bandwidth by sending superfluous messages, doesn't offer much help with this.

Today's leading authority for general-purpose overload management is David Allen's "Getting Things Done," a 2001 guide to "the art of stress-free productivity." Allen sees us all haunted by "open loops": uncompleted tasks, unresolved issues and, yes, unanswered e-mails. His solution? You must find a way to corral everything in your life into a single in box; then you can organize, discard and archive stuff until, finally, you have achieved the goal of emptiness. Allen is a martial-arts sort of guy, so he describes this state as "mind like water." Although Allen's method isn't specifically aimed at e-mail or other digital-age communications streams, it has been embraced by a geek subculture that refers to it simply as "GTD," gathers around popular blogs, and cranks out a stream of new software tools to implement it.

"GTD" raises the central existential dilemma of e-mail management: Is it better to take arms against a groaning in box and sweep it clean? Or to make peace with the torrent of e-mail, accepting that it has neither beginning nor end?

Allen comes down hard on the side of ruthless in-box control. An even more detailed prescription along similar lines is offered by a new book from Mark Hurst, "Bit Literacy." If an empty in box is your goal, Hurst -- a usability expert who runs the annual GEL Conference -- will show you exactly how to get there. You must delete ruthlessly. You have to "let go of the bits." You must get your message count to zero and keep it there, every day.

"Bit Literacy" is a useful book full of detailed good advice from the trenches of the Internet. If you haven't already figured out that plain text is the best way to store information, that it's good to keep all your data in one über-folder, or that you should closely monitor your "media diet," Hurst will guide you well.

Let's just get this confession over with: My in box is not empty. At the moment, it contains 16,694 messages. Once, I suppose, my in box must have had a zero message count -- maybe back in 1991, when I got my first e-mail account. It has not seen zero since.

Yet I do not struggle to empty my in box. Instead, when I scan new messages, I ruthlessly trash spam or irrelevancies, auto-filter mailing-list messages, and then flag ("label" or tag) any messages that require further response or action. The rest just flow on by after I've glanced at them.

My in box is not a desk that must be cleared. It is a river from which I can always easily fish whatever needs my attention. Why try to push the river? Computer storage is cheaper than my time; archiving is easier than deleting. At the end of every year I move the oldest 20,000 or so messages into their own folder. Then I let my in box fill up again. (Admittedly, I don't use Outlook, which doesn't always handle fat mailboxes gracefully.)

Do we really want the job of in-box attendant and e-mail folder file clerk? The mess is Augean scale, the job Sisyphean futile. At least under Allen's "GTD" model, you (along with maybe some relatives or colleagues) control the flow into your own in box of "things to do." But anyone can stuff anything into your e-mail in box. If you accept Hurst's mission of "getting to zero," it will keep eating up more of your day no matter how efficient you are. And you'll be letting other people control your time.

The argument for the empty in box depends on the notion that a crowded in box is a psychic burden. But that's only true if you feel that a crowded in box represents a failure. What if you don't care -- and you still Get your Things Done? What if you believe -- as the book "A Perfect Mess" argued earlier this year -- that neatness is overrated, and moderate disorganization is a sign of creativity and productivity? Messy is exuberant, and exuberance is beauty. A clean in box might be a proud badge of productivity. But it might mean you wasted hours every day fussing over your e-mail when you could have been writing your own "War and Peace," building the next Google, or drinking a glass of wine.

The experts mostly agree that an empty in box is a must. I'm sure they would view me as a basket case. Then again, in this decade the most successful and innovative new tool for managing e-mail is Google's Gmail, which is custom-made for my approach: Instead of expecting you to be your in box's groomer and custodian, Gmail discourages the use of folders, archives old messages automatically and offers a great search tool. Rather than enslave you to your in box, it harnesses machine power to handle the machine-fueled flood.

"Bit Literacy" and "Send" both view e-mail -- and online existence in general -- as problems to be managed. There are plenty of good reasons for that defensive stance. But the Gmail example shows that other postures are possible. For instance, because Gmail pools the feedback from all its users about which incoming messages are spam, it's superbly efficient at blocking that spam from your view. As "Everything Is Miscellaneous" author David Weinberger puts it, "The solution to the information overload problem is more information."

Mark Frauenfelder's new book "Rule the Web" -- a hands-on guide to the latest generation of online tools for productivity and creativity -- is for people who look at their fat in boxes and cry, "Bring it on!" Don't over-worry about managing your information flow, "Rule the Web" implies; instead, check out these dozens of ways you can mash up your info-stream with everyone else's. In other words, if you don't like the bits you receive, go out and make some of your own.

"Rule the Web" is a miscellany of mostly free services, tools and tips for managing e-mail and blogs and feeds and photos and music and videos. (Full disclosure: I contributed a paragraph -- uncompensated -- to the book's appendix, which features suggestions from bloggers.) Keeping up with this stuff is part of my work, yet I learned at least a half-dozen useful new tricks.

This is not as targeted a tome as "Send" or "Bit Literacy," but it's considerably more fun. Frauenfelder, who founded the phenomenally popular BoingBoing blog in 2000, takes an upbeat view of the opportunities the Net affords us -- but there's nothing naive about his optimism. "Rule the Web's" canvas includes scam artists and virus writers and flamers and such; it just doesn't let the bad stuff get it down.

Some significant chunks of "Rule the Web" consist of step-by-step explanations of Web-based services that, really, ought to be self-explanatory. And the material covered is ephemeral enough that some of it will date rapidly. (There are updates and new tidbits on the book's blog.)

Mostly, however, "Rule the Web's" cornucopia of cool stuff is a treat. It's also a reminder of why we bother to spend so much time with e-mail and the Web in the first place: They're full of life. They're changing all the time. And they can still surprise us -- at least when we keep the Viagra-ad detritus from blocking the view.