Bush's moralistic Middle East crusade has backfired, creating more enemies than it destroys. It's time for a tactical retreat. 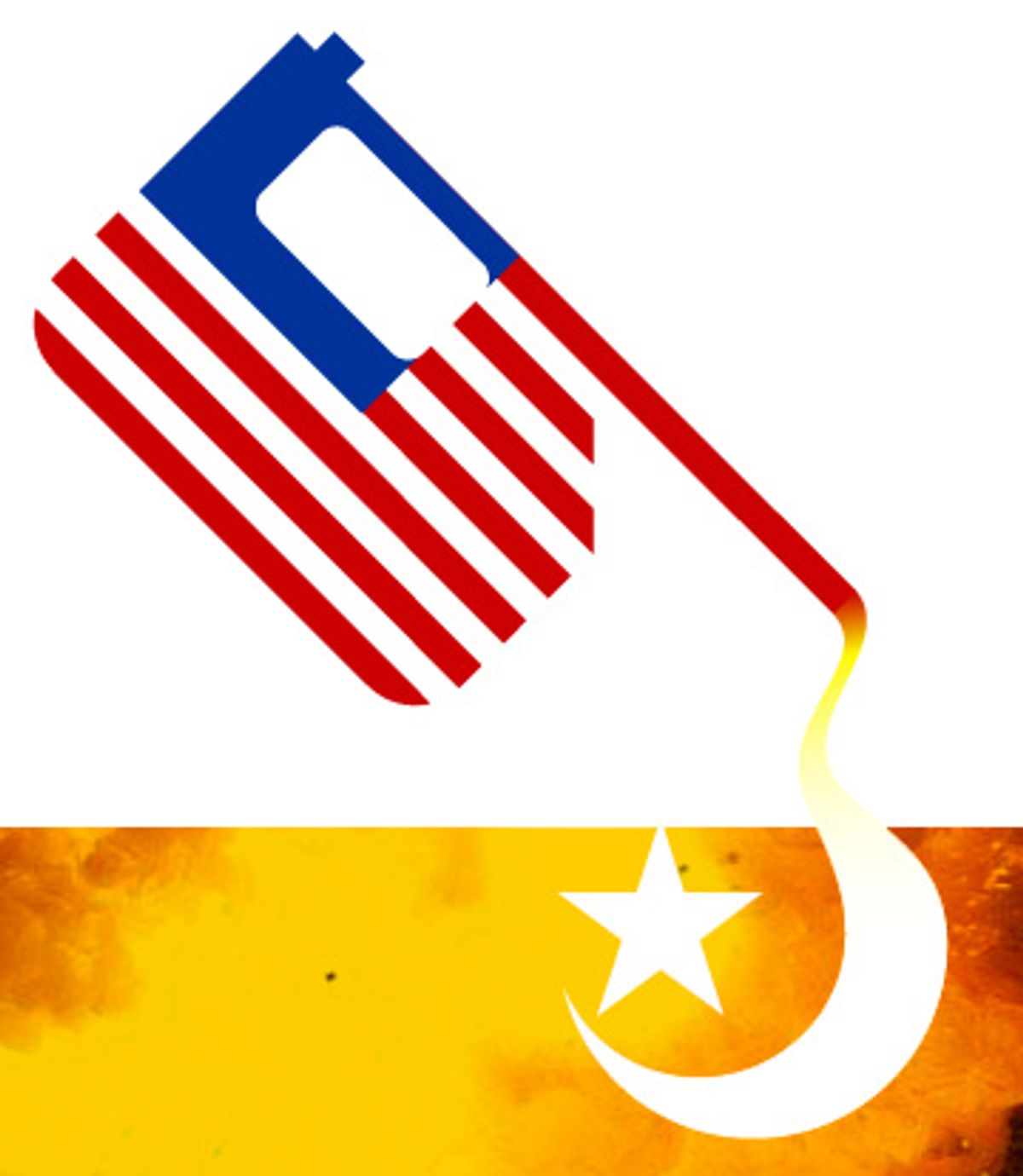 It is long past time for America to grasp that Bush's decision to pound the Muslim world into submission -- not just in Iraq, but in Lebanon and in Palestine -- is not the solution, it is the problem. We have turned an entire region, and the adherents of one of the three largest religions in the world, against America and everything that it represents, including democracy. As if in a nightmare, our actions have multiplied the demons of apocalyptic religious terrorism they were intended to destroy.

By green-lighting Israel's war against Lebanon and trying to suffocate Hamas, Bush has succeeded in deepening Muslim hatred of the U.S., without achieving any results on the ground. By invading and occupying a country in the heart of the Arab/Muslim world, the U.S. gave Osama bin Laden and his fellow jihadists a greater gift than they could ever have dreamed of. Invading Iraq to defeat jihadist terrorism was like pouring a can of gasoline on a fire. Now that the fire is raging out of control, continuing to fight it is simply pouring more gasoline on it.

Jihadists need their American boogeyman as much as Bush needs his Islamist boogeyman. By fighting them in the wrong way and on the wrong terrain, we have inadvertently allowed them to claim the heroic mantle of nationalism and anti-Americanism. When the U.S. occupiers leave, Osama bin Laden and his ilk will groan in despair.

At this point, the smartest thing we could do would be to leave the jihadists alone and let their neighbors deal with them. Better still, send them birthday cards.

According to military sources cited by the New York Times, every month 60 to 80 foreign fighters enter Iraq to fight for al-Qaida in Mesopotamia. These men, who represent a fraction of the insurgents in Iraq, are the ultimate bad guys, the true believers who would gladly blow up anything American if they could. Yet even these ardent jihadis are not, contrary to neocon claims, an eternal fact of life in the "pathological" Arab world. They are drawn by the presence of U.S. occupiers on Arab soil. Remove the occupiers and their numbers will drop. If Iraq breaks apart after the U.S. departs and descends into a hell of sectarian violence, the brutal logic of numbers will prevail. The jihadists are all Sunnis, and Iraq is going to be a Shiite-dominated country. The Shiites can deal with al-Qaida in Mesopotamia far more efficiently than we can.

A good general recognizes when the conditions are not favorable for a battle -- and this is one war that we simply can't win. But in the long run, a U.S. defeat in the Middle East will be a victory.

For Bush and the neocons, such an acknowledgment of obvious reality is tantamount to treason. Their mantra is "we must take the fight to the jihadists over there so we don't have to fight them over here." In a July 12 press conference in which he discussed interim Iraq benchmarks, Bush repeated this theme: "As president, my most solemn responsibility is to keep the American people safe. So on my orders, good men and women are now fighting the terrorists on the front lines in Iraq."

Yet it is precisely because we are fighting Arabs and Muslims "over there" that the American people are less safe. That is a conclusion reached not by leftist appeasers but by Bush's own intelligence agencies. Almost six years into his war on terror, al-Qaida is as strong now as it was just before the 9/11 attacks, according to a U.S. intelligence threat assessment.

This finding should come as no surprise. It echoes what American intelligence has been saying for the last year. The last National Intelligence Estimate, which came out in 2006, concluded that the Iraq war had greatly strengthened jihadists around the world. The latest NIE, of which the "threat assessment" forms a part, is not out yet, but it will no doubt reach the same conclusion.

To borrow a concept from the realist school of great-power politics, the Muslim world is outside of our sphere of influence, at least military influence. We are simply too despised there, our goals too dubious, our allies too problematic and our methods too destructive. It is not possible to surgically separate the jihadists, who are our real enemy, from the nationalists and anti-Americans, who make up the bulk of the region's population. Most Arabs and Muslims despise the jihadists. But by attacking the Muslim world, we have turned them into anti-American heroes.

What holds true for jihadists is doubly true for complex militant organizations like Hezbollah and Hamas. Most of the world's Muslims see these groups, which Bush and his neocon brain trust lumps in with al-Qaida, as legitimate national liberation or resistance movements, and are enraged that the U.S. has tried to starve or bomb them into submission. American support for Israel's war on Lebanon last summer greatly weakened our already abysmal standing in the region, and strengthened al-Qaida and its ilk.

By conflating jihadists with militant, religiously oriented national liberation movements like Hamas, Bush has not only undercut the support we might otherwise have received from Arab populations for police operations against genuine jihadists, he has helped to create toxic new forms of anti-Western extremism. Indeed, the most damaging result of Bush's crudely undifferentiated "war on terror" may be that he has succeeded in creating the dangerous, mixed-up jihadist-nationalist boogeyman that he set out to destroy. If al-Qaida-like groups manage to get a foothold in Lebanon or Gaza -- and there are ominous signs that they are -- the Israeli-Palestinian crisis, the world's most dangerous and intractable problem, may become completely unsolvable.

The irony is that without our help, the jihadists would be struggling to survive. As Gilles Kepel, a French expert on radical Islam, argues in "The War for Muslim Minds," very few Muslims, no matter how radical, support al-Qaida. "Beyond the circle of Bin Laden and Zawahiri and their supporters and admirers ... the majority of Islamists and salafists, let alone most of the world's Muslims, no longer see the commando action carried out by 'the umma's blessed vanguard' against the twin towers and the Pentagon as fulfilling the promise of jihad," Kepel writes. "On the contrary, after the first few seconds of enthusiasm for this blow to America's 'arrogance,' most Muslims saw the massacre of innocents on Sept. 11 as opening the door to disorder and devastation within the house of Islam."

The suggestion that we now leave a bunch of fanatical mass murderers alone may strike most Americans as cowardly and morally contemptible. But what we want are results, not self-righteous campaigns that make matters worse. Bush's righteous war has failed. To leave jihadists alone is not to appease them. It is to plan their isolation and eventual extinction more precisely.

In response, hawks argue that the jihadists will hate us and try to destroy us no matter what we do. "We weren't bothering them before 9/11, and they killed 3,000 Americans!" they shout angrily. "The war is on, and we have to win!" Leaving aside the historical myopia involved in the claim that America's foreign policies had nothing to do with 9/11, and the inconvenient fact that Bush's crusade has greatly strengthened the jihadists, this argument still runs up against the painful reality that it has now become clear that this is one war we can't win.

To be sure, there are rare cases when military action against radical Islamists may be necessary and effective. The U.S.-led invasion of Afghanistan, for example, was both justifiable according to just war doctrine (on the grounds that the Taliban regime, which was harboring al-Qaida, constituted an imminent threat) and could turn out to be successful, although there are increasingly ominous signs. But Afghanistan is a unique case. Every other country in the region is far more problematic.

Similarly, I'm not saying that if a group of high-ranking al-Qaida operatives suddenly decided to tell the CIA that they were going to pose for a group photo in a field in the Northwest Territories of Pakistan, we shouldn't blast them all to heaven with a Hellfire missile. But in the real world, these kind of golden opportunities almost never present themselves.

After we leave Iraq, as we inevitably will, we need to do three things to fight the "war on terror" effectively. First, we need to ratchet down our apocalyptic and moralistic rhetoric and recognize the jihadist enemy's true, relatively modest dimensions. This ain't no Soviet Union we're fighting here -- it's a bunch of guys in caves. Second, we need to use military force as a last resort. As Iraq has shown, occupation and war create more jihadis than they capture or kill. Instead, we need to use intelligence and police forces to break up jihadist terror networks. Finally, we need to address both the Arab/Muslim world's self-created pathologies and its legitimate grievances, both of which contribute to jihadism. War supporters make much of the pathologies, but have almost nothing to say about the grievances -- chief among them the festering Israeli-Palestinian conflict, the greatest source of Arab/Muslim rage against America.

There's nothing radical about any of these ideas. They are essentially the ones proposed by the Iraq Study Group, whose long-range policy recommendations would set America's Mideast policies on a rational course.

Ironically, the Bush administration has begun to embrace some of these ideas -- alas, too late. By partnering with Sunni insurgents who are sick of the violent nihilism of al-Qaida radicals, U.S. forces in Iraq have had some success in isolating hardcore jihadists from Iraqi nationalists. This kind of hardheaded realism, with its tacit acknowledgment that moralistic labels are counterproductive (today's Sunni allies were yesterday's terrorists), points toward the more rational and pragmatic policy we need to embrace in the region as a whole.

It is very hard for Americans to admit that there are some enemies that are best left alone. Our tendency to moralistic self-righteousness, our refusal to admit defeat and our belief in our invincible military all conspire against such an admission. But until we realize this, we are likely to be tempted to engage in future adventures -- like a war against Iran -- that are likely to prove even more disastrous than Iraq.

Even a superpower has areas where it cannot impose its will. The limits of American power have been shown in the Middle East. It's time to get out, protect our own borders, do some diplomacy and police work, and let things cool down. And they will cool down. The jihadist moment is too insane and self-destructive to last. Like a wildfire, the best thing to do is starve it of oxygen.

In short, it's time for a tactical retreat. Tactical retreats don't look good on a president's legacy sheet, and they don't inspire stirring patriotic songs. But they can save armies -- and nations.