The latest government estimate of the terrorist threat is just a rehash of the same old script, produced under pressure to support the president's efforts to sell the Iraq war. 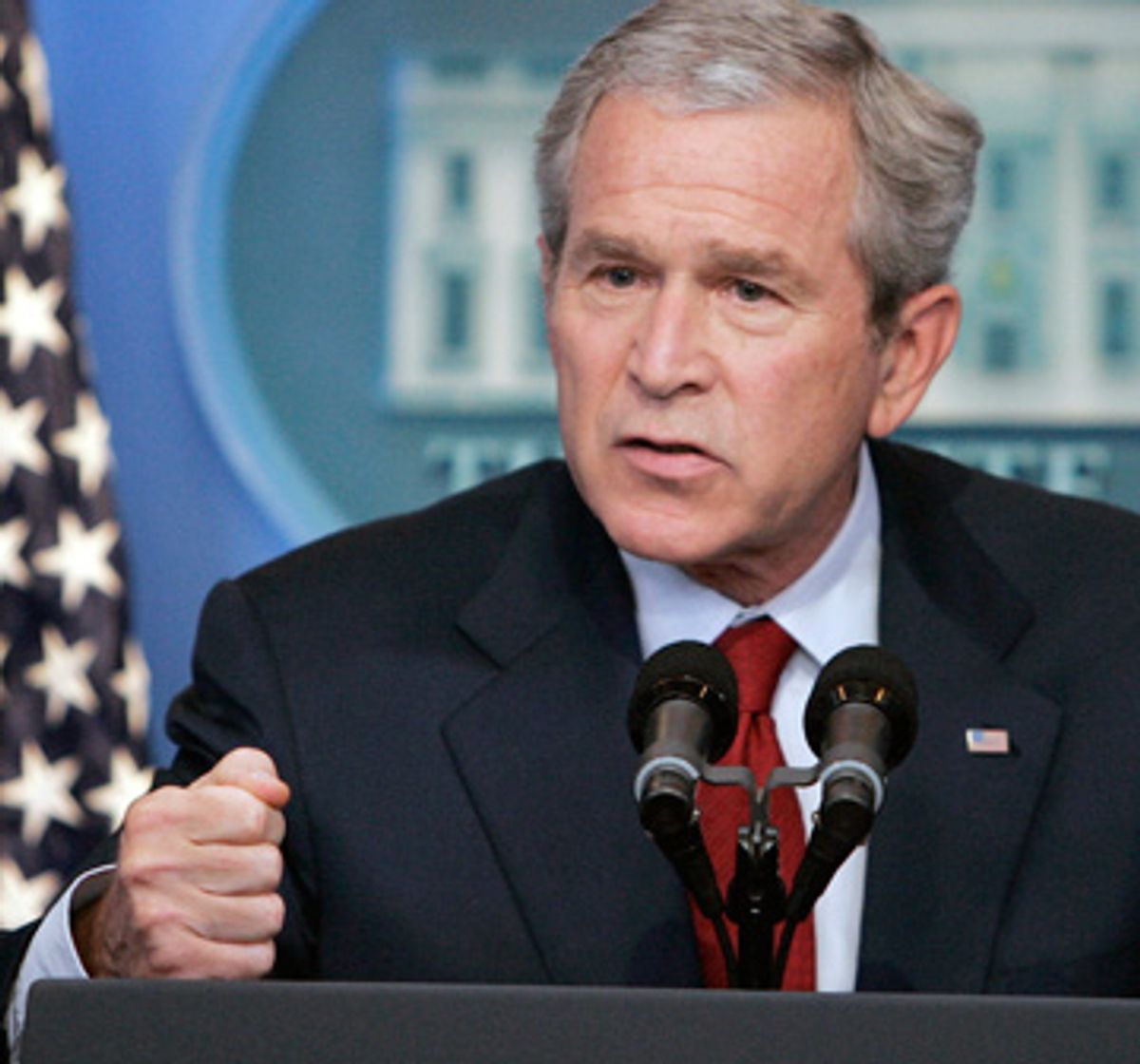 One of the more memorable and revealing statements explaining the nature of the Bush administration buildup to the invasion of Iraq was offered in September 2002 by then White House chief of staff Andrew Card. "From a marketing point of view," he said, "you don't introduce new products in August." Five years later, a period longer than the Civil War and World War II, the administration is preparing to present its case for continuing the surge in Iraq. But rather than waiting for September, when Gen. David Petraeus is scheduled to deliver his report, the administration has moved up the marketing to July.

The familiar props are rolled out, like the well-worn and peeling painted backdrop for a production of a traveling Victorian theatrical troupe, and members of the audience are expected to watch with rapt fascination, as though they had never seen this show before. The negative response to the preview does not alter the same old script.

The usual atmospherics are pumped up -- sudden panic and fear, an elusive and ubiquitous enemy that assumes many guises and shapes, cherry-picked information to provide a patina of verisimilitude to the danger, followed by a march of authority figures to rescue us. Michael Chertoff, the secretary of homeland security, held a press conference on July 11 to announce that he had a "gut feeling" that the terrorist threat was dire. Gen. Peter Pace, the outgoing chairman of the Joint Chiefs of Staff, on his final tour of Iraq Tuesday, proclaimed a "sea change." Meanwhile, Secretary of State Condoleezza Rice frantically telephoned moderate Republican senators, urging them not to defect from support of the president's position.

Even Rosencrantz and Guildenstern supporting players wander through, like Frances Townsend, President Bush's homeland security advisor, who, Tuesday, entered right into the White House press room to declaim about the terrorist threat, only to confirm the administration's failure to destroy al-Qaida and expose her own bafflement: "You're assuming it's a zero-sum game, which is what I don't understand."

Gen. Petraeus is promised as the dramatic hero who will stride to triumph in the last act. The author of a recent study of counterinsurgency who has not previously fought such a war, he has been thrust into the spotlight partly because his halo is yet untarnished. Bush's unpopularity disqualifies him from the "Mission Accomplished" moment. So he pushes out his handpicked general and walks behind his chariot, hoping the cheering of the crowd will be also for him. In his July 12 press conference, Bush mentioned Petraeus 11 times, his name flourished as a talisman for "victory." The generals with the greatest experience with the Iraq insurgency, who opposed Bush's surge, such as Gen. John Abizaid, an Arabic speaker, have been discharged or reassigned. The burden on the ambitious general to produce a military solution is unbearable and his breaking inevitable. But for now, Petraeus' tragedy foretold is being cast as the first dawn of a happy ending.

At his July 12 press conference, Bush elevated al-Qaida to enemy No. 1 in Iraq and mentioned it 31 times, asserting that not supporting his policy would lead to "surrendering the future of Iraq to al-Qaida." Asked about the soon to be released National Intelligence Estimate on al-Qaida, Bush claimed it would state, "There is a perception in the coverage that al Qaeda may be as strong today as they were prior to September the 11th. That's just simply not the case."

One day later, on July 13, Bush held a meeting at the White House for a small group of conservative pundits, giving them a glimpse into his state of mind. David Brooks of the New York Times described his "self-confidence." Fred Barnes of the Weekly Standard quoted him saying, "I'm optimistic," even though he also said, "I understand the polls. This is an unpopular war!" At his press conference, Bush had said, "There is a war fatigue in America." And he pointed to his head. "It's affecting our psychology." During his meeting with the conservative writers, he mocked his critics. Kate O'Beirne and Rich Lowry of the National Review quoted him as saying: "How can he possibly do this? Can't he see? Can't he hear?" The son of a president explained that no one could really understand what it meant to be president. "You don't know what it's like to be commander in chief until you're commander in chief," he said, according to participants. His critics could not possibly understand him. But he was obviously peeved. Washington, he complained, was filled with "a lot of talkers." Yet Bush pledged, unbidden, that he would not listen to these critics. "I'm not on the phone chatting up with these people writing these articles, ascribing motives to me." Such are the reflections of the so-called self-confident president.

On Tuesday, the executive summary of the new NIE on al-Qaida was made public. But it did not fit the administration's marketing campaign. Al-Qaida, the report stated, has "protected or regenerated" itself in the northern provinces of Pakistan. It also said that the terrorist group would "probably leverage" its contacts with the group known as al-Qaida in Iraq, an "affiliate," and "the only one known to have expressed a desire to attack the Homeland."

The next day, Wednesday, the U.S. military made a timely announcement of the capture of Khalid Abdul Fatah Daud Mahmoud Mashadani, a courier for al-Qaida in Iraq. After two weeks in detention, he confessed to hand delivering messages from al-Qaida leaders Ayman al-Zawahiri and Osama bin Laden, suggesting that the so-called enhanced interrogation techniques vociferously defended by the administration indeed work.

The latest NIE, however, is a strange product. According to highly reliable sources in the intelligence community, no new intelligence at all is reflected in the NIE. Its conclusions, on one level, are a rehash of obvious facts that anyone who reads a daily newspaper could glean, such as the protected status of al-Qaida in frontier regions of Pakistan. Other conclusions lack contextual analysis, partly because of the continuing pressure from the administration to politicize information and cherry-pick intelligence. The NIE, for example, does not explain that al-Qaida in Iraq, while lethal, is a very small part of the Sunni insurgency, and that a number of Sunni insurgent groups are its sworn enemies. Nor did the NIE note how few foreign fighters are in Iraq and what a small percentage of insurgents they constitute. (A Los Angeles Times story published on July 15 reported that of the 19,000 Iraqi prisoners held by the U.S. military there, only 135 are foreign fighters, and nearly half are Saudis.) The NIE is utterly devoid of political analysis.

According to intelligence sources, CIA director Michael Hayden has been under attack within the administration from Dick Cheney and the neoconservatives since testifying frankly to the Baker-Hamilton Iraq Study Group that urged a strategic redeployment of U.S. forces and new diplomatic efforts in the region, which were rejected by President Bush. A virtual paralysis is setting in within the intelligence community. Analysts are even anxious about putting their names on their reports. While they are homogenizing information, the administration is still unhappy with the result, as it was with the new NIE.

For the embattled president, filled with "self-confidence," the "motives" he doesn't wish critics to examine turn out to be far more utopian than the military success of the surge, as he explained to his conservative interlocutors. "There is such a thing as the universality of freedom. I strongly believe that Muslims desire to be free just like Methodists desire to be free." Beneath the seething chaotic violence, beyond the tribal and religious strife, past the civil war, the Iraqis, according to the president, under their robes are no different from American Methodists. There's nothing more to understand. If only we can prevail, they can be just like us. The rest is marketing.