Scientists now fear a chemical used in baby bottles and CDs, food cans and dental sealants, can disrupt fetal development and even lead to obesity. 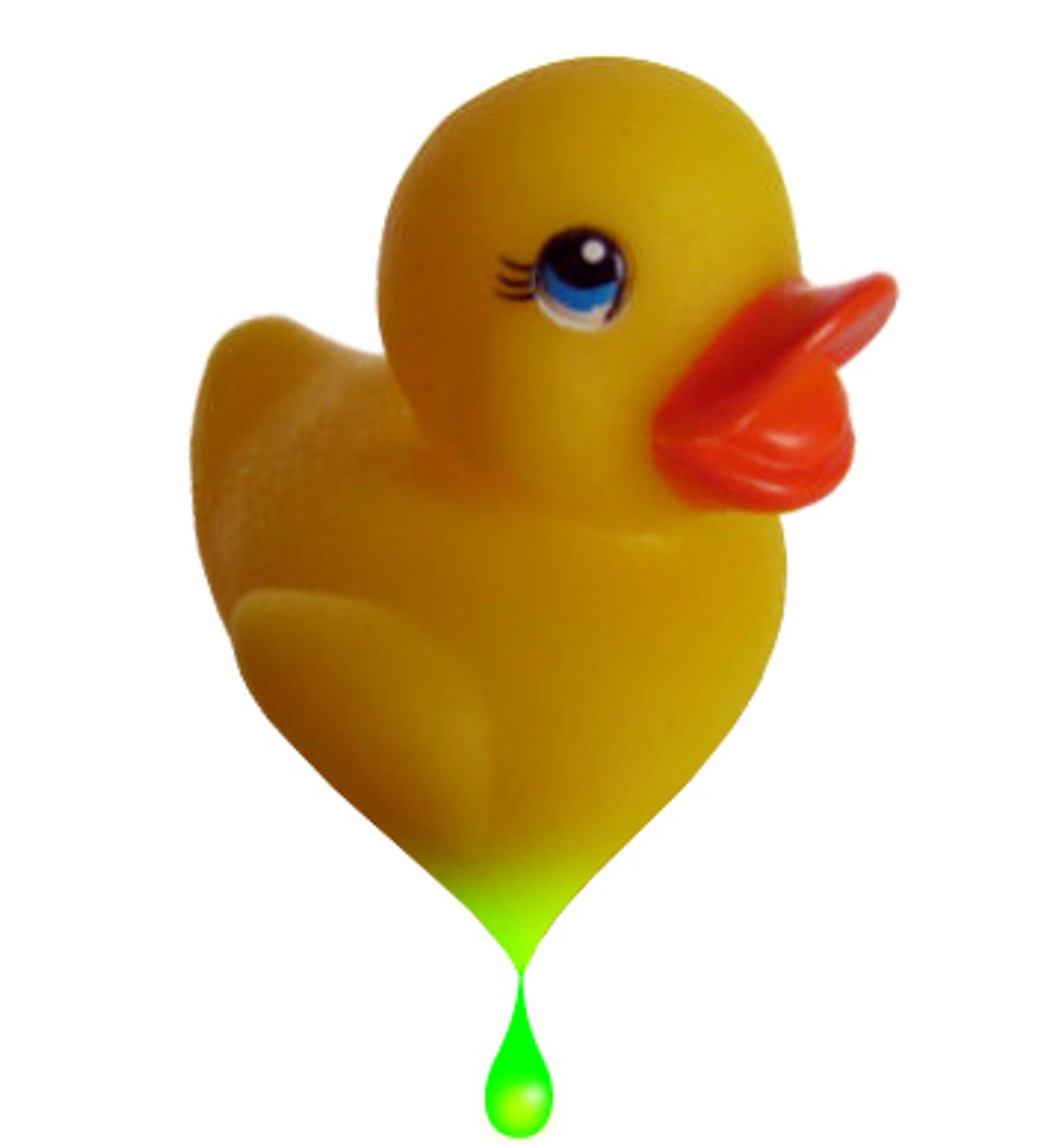 You can't taste it or smell it, but if you ate canned soup for lunch or sipped from a shiny transparent water bottle at the gym, a chemical called bisphenol A probably entered your body. The American Chemistry Council tells us that bisphenol A makes our lives "healthier and safer, each and every day." But accumulating scientific research indicates the chemical may be adversely affecting women's ability to have children and children's reproductive health. Recent studies link bisphenol A to obesity, breast and prostate cancer, and neurological disorders.

Bisphenol A is a building block of the durable light plastics used in consumer products ranging from baby bottles to coffee makers to laptop computers, CDs to dental sealants to food can liners. It's a key ingredient of car parts, water filters, textiles, paper and a widely used flame retardant. "Everyone is exposed to it," says Dr. Hugh S. Taylor, reproductive endocrinologist at Yale University School of Medicine, who is studying the impact of the chemical on female reproductive health.

The official bisphenol A industry group Web site maintains its products "pose no known risks to human health." A growing number of scientists disagree, and bisphenol A, which appears to produce adverse impacts at low levels of exposure, is now at the center of a controversy challenging established methods of determining chemical safety.

In the past year, legislators in several states have introduced bills that would restrict local sale of infants' and children's products containing bisphenol A. In March, a class action lawsuit -- the first of its kind -- was filed in Los Angeles Superior Court against manufacturers and retailers of affected baby bottles and cups. In December 2006, San Francisco adopted a law that would ban the sale of baby products with bisphenol A. However, this May, in the wake of lawsuits by chemical and toy manufacturers, and a review by the city's health and environmental departments, the city repealed the ban, vowing to reconsider it in a year.

Americans have been increasingly using products made with bisphenol A since the 1940s. Between 1980 and 2000, U.S. production of bisphenol A grew nearly five times. Worldwide, over 6 billion pounds are now produced annually. This is big business. Sales of bisphenol A products, whose manufacturers include Bayer, Dow Chemical and General Electric, generate billions of dollars annually.

While bisphenol A has earned approval by the U.S. Food and Drug Administration for what are called "food contact" consumer products, the Centers for Disease Control has found bisphenol A in 95 percent of tested Americans at or above levels that have been found to cause abnormalities in animals. The FDA has responded that "impurities and processing aids" used in these plastics can migrate to food, but at much lower levels than those that have caused adverse effects in animal tests.

First recognized as a synthetic estrogen in the 1930s, bisphenol A belongs to a category of chemicals called endocrine disrupters because of their ability to interfere with hormone function. Endocrine disrupters interact in specific ways with the genetic receptors that determine a number of vital bodily mechanisms. In the case of bisphenol A, these apparently include egg cell, reproductive organ, and fat cell development. Its most profound effects appear to take place prenatally and in the early stages after birth.

Bisphenol A produces its adverse effects in "phenomenally small amounts," says Frederick vom Saal, professor of biology at the University of Missouri, Columbia, who has studied bisphenol A for over a decade. As vom Saal and other researchers point out, these levels are below those the FDA considers safe for daily human consumption.

Scientists have known that bisphenol A could leach from finished plastics since the early 1990s. That low levels of exposure could cause genetic abnormalities was discovered more recently.

In 1998, molecular biologist Patricia Hunt and colleagues at Case Western Reserve University were investigating chromosomal changes that occur in egg cells as animals age. The experiment compared mice with abnormalities to normal mice. "One day, the controls went bananas, showing a huge number of chromosomal abnormalities," recalls Hunt, now professor of molecular biosciences at Washington State University. The spike was so severe the researchers thought it must be caused by a chemical exposure. They discovered the contamination came from bisphenol A released by degrading plastic in the mouse cages.

Further upsetting traditional toxicology is that low doses of bisphenol A can produce adverse impacts while high doses may not. Hunt, Taylor and vom Saal explain that low levels of exposure during fetal development can cause lasting changes in reproductive and metabolic development. These changes to the fetus are permanent and irreversible, whereas impacts of adult exposure are reversible. "The fetus is exquisitely sensitive to bisphenol A," says Hunt. "One hit during a brief window of time can influence future development."

In January of this year, Hunt and colleagues published a study showing that exposure to small levels of bisphenol A disrupts normal egg cell growth in a developing female mouse embryo, setting the stage for potential miscarriage. Bisphenol A, explains Hunt, affects three generations: mother, developing female baby, and the daughter's potential children. Meanwhile, Taylor and his colleges have seen lifelong changes caused by prenatal exposure to bisphenol A.

In a recently published paper, they show that exposure to bisphenol A during pregnancy can cause "lasting changes in development of the uterus that could pose problems in pregnancy," including potential miscarriage. Hunt and Taylor both explain that many factors contribute to miscarriage and fertility problems. But, says Hunt of bisphenol A, "We know enough to know that we should be concerned." Exposure to bisphenol A is "an important and modifiable environmental risk that we should at least inform people about," says Taylor, who is also an attending physician in the Department of Obstetrics and Gynecology at Yale-New Haven Hospital.

Scientists have also recently discovered that prenatal exposure to bisphenol A can lead to a predisposition to obesity. Bisphenol A, explains vom Saal, interacts with the nuclear hormone receptors that prompt fat cell development. Bisphenol A apparently accelerates this process, known scientifically as adipogenesis, causing exposed animals to develop more fat cells -- as well as fat cells that store more fat -- leading to a lifetime tendency to obesity. It also affects the feedback loops to which hormones respond, prompting exposed fat cells to send more signals, asking, essentially, to be fed, causing excess fat accumulation.

Again, the levels at which bisphenol A interferes with normal genetic programming confounds traditional toxicological assumptions. "An unexpected finding is that if you only look at high doses of bisphenol A, you'll see it suppressing body fat," says vom Saal. He explains that at high levels of exposure, hormone receptors can become flooded and shut down, while low doses can prompt specific genetic activity. This phenomenon contributes to the difficulty of assessing the toxicity of endocrine disrupters and to the current controversy over the health impacts of bisphenol A.

Since 1997, well over 100 published studies have documented adverse effects in animals caused by exposure to low levels of bisphenol A. Vom Saal notes that the studies showing few or no health risks associated with bisphenol A have examined high rather than low doses, and have tended to be sponsored by chemical and plastics industries. Scientists studying endocrine disruption also note that the genetic mechanisms affected by these chemicals work similarly in all animals, including humans.

Industry representatives counter that it's not a matter of keeping score but a matter of scientific weight of evidence. A fact sheet posted on the Bisphenol A Industry Group Web site cites studies "demonstrating that BPA is not an endocrine disrupter at any realistic level of exposure." The Baby Bottle Information Center says that bisphenol A studies citing adverse impacts to reproductive health contain speculation that goes "far beyond the actual findings of the study." In short, says Steven Hentges, spokesperson for the American Chemistry Council, "the science doesn't support any concerns about bisphenol A's impact of human health."

Bisphenol A is also now under review by the National Toxicology Program, part of the National Institutes of Health. But the review committee, convened by the Center for the Evaluation of Risks to Human Health, ended its March 2007 meeting without reaching any decisions. During that meeting, questions were raised about conflicts of interest on the part of Sciences International Inc., the consultants hired to gather and summarize the research being evaluated. Sciences International scientists, it was discovered, had also worked for chemical manufacturers, including producers of bisphenol A. In April, the National Institutes of Health terminated Sciences International's contract and is now evaluating the company's work on bisphenol A.

In the absence of definitive guidelines, what's a consumer to do? "A primary route of exposure is ingestion," says Taylor. So "bisphenol A is easy to avoid when pregnant. Don't eat canned goods, don't have dental sealants put in unless absolutely necessary, and use glass instead of plastic water bottles," he suggests.

Hunt advises avoiding plastics once they become visibly rough, a sign that suggests leaching of bisphenol A. "To me, any chemical that can mimic the activity of estrogen is scary," she says. Yet the American Chemistry Council's baby bottle safety Web site has conflicting advice: "Over time, polycarbonate plastic can become cloudy from normal wear-and-tear on the surface. There is no health-based reason to stop using a baby bottle that becomes cloudy."

To date, a direct link between bisphenol A and human reproductive problems and obesity has yet to be proven. It's hard to make that connection, says Taylor, because "people don't know they have had an exposure and it may not manifest itself for 20 to 30 years." But, says Hunt, "If we wait for comparable human data and it comes out like animal data, we aren't going to be breeding as a species."