At the YearlyKos convention, the mixed reception for Hillary Clinton is more evidence that the liberal blogosphere might not take sides in the coming Democratic primary. 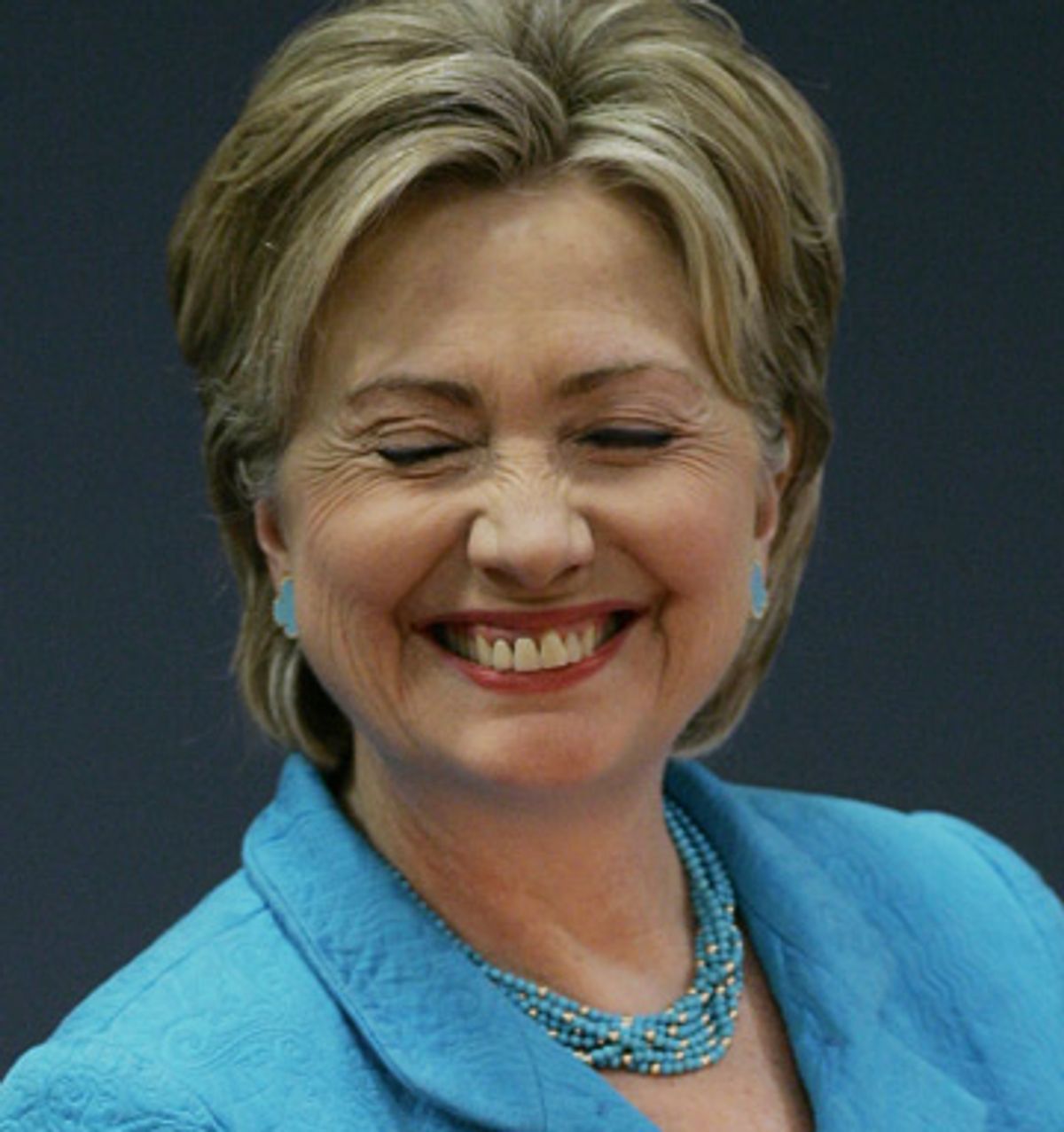 The most self-controlled figure in Democratic politics, Hillary Clinton, seemed to know from the outset that she was walking into a trap. The cavernous ballroom of the Hyatt Regency was filled with about 1,500 liberal bloggers and activists -- the so-called Kossacks, the former Deaniacs, the people-powered Joe Lieberman-bashers who helped reshape the Democratic Party for the 21st century. So when the loud boos finally arrived, a full hour into the Democratic presidential debate at the second annual YearlyKos convention Saturday, and two hours after her arrival at the convention, all she could do was smile. "I've been waiting for this," she told the crowd. "This gives us a real sense of reality with my being here."

Then something happened: The crowd started to laugh. Then it cheered. Then the cheering grew even louder than the booing. Up to that moment, the debate audience had been voicing their disapproval of Clinton for defending Washington lobbyists, whom she allows to contribute money to her campaign unlike her top two rivals, Barack Obama and John Edwards. "A lot of those lobbyists, whether you like it or not, represent real Americans," she told them. But now they were voicing their approval, and not because they suddenly agreed with her. Any poll of YearlyKos attendees would almost certainly place lobbyists in a circle of hell just a step or two outside the ones reserved for Attorney General Alberto Gonzales, Fox News talker Bill O'Reilly and Vice President Dick Cheney.

They were cheering because Clinton had, in her way, acknowledged the views and the legitimacy of the blogging community. This had been her mission from the moment she arrived in Chicago. "Don't tell anybody, but I actually read the blogs," she had joked about an hour before the debate, during a breakout session with hundreds of bloggers and activists. "Don't share that." It was a modest step, to be sure, but it was pitch perfect given the current state of the liberal online community.

The so-called netroots is undergoing a transition of sorts in the wake of the 2006 Democratic victories, when the party leadership effectively adopted the message and tactics of mostly liberal online insurgents. For the first time since the invasion of Iraq, Democrats spoke with a muscular voice against Republican rule and the misbegotten war overseas. Two Senate candidates who garnered early online support, Jim Webb in Virginia and John Tester in Montana, won upset elections that changed control of the legislative branch. The community's chief punching bag, Connecticut Sen. Joe Lieberman, was forced to leave the party. Now, with the most costly Democratic presidential primary in U.S. history on the horizon, the same blogging community finds itself in uncharted territory. Once the outsiders, the lefty bloggers and readers who gather each day online have now become an unmistakable part of the Democratic family. Every presidential candidate, save Delaware Sen. Joe Biden, attended Saturday's YearlyKos debate in Chicago. Democratic Party leader Howard Dean gave a rousing keynote address to the convention Thursday. Illinois Sen. Dick Durbin delivered a video message to the opening day crowd. He declared, "If it weren't for the progressive netroots, I wouldn't be assistant majority leader."

At the same time, much of the frustration that once led Democratic bloggers to wage fierce intraparty battles appears to have dissipated. In its place is a sort of cautious elation at the direction of the country's politics, especially when the topic shifts to the coming presidential election and the Democratic candidates. "I feel no compulsion to pick anybody," confessed Markos Moulitsas Zuniga, the proprietor of DailyKos, the largest liberal blogging community, "because they are all so great."

His broad confidence papered over the many substantive differences that divide the Democratic primary field. Clinton and Obama, for example, appear prepared to leave residual U.S. military forces in Iraq for perhaps years, while Edwards and Bill Richardson seek a more prompt withdrawal. Edwards believes the "global war on terror" is an empty "bumper sticker" phrase, while Clinton embraces its rhetorical value and maintains that America is safer now than it was on Sept. 11, 2001. Obama harps exhaustively on Clinton and Edwards for their initial support of a resolution allowing the Iraq war, which he opposed. He has also recently announced his willingness to preemptively attack Pakistan as part of the effort against al-Qaida. All of the candidates have announced, or will announce, different approaches to establishing universal healthcare.

But with only rare exception, these differences have not become flash points on the liberal blogs, a marked contrast to 2003, when the nascent blogosphere heartily rallied behind a single candidate, Howard Dean, in the primary. Even some of the netroots founding members have begun to take notice. "The bloggers are I think in many ways taking themselves out of the debate by not participating in it," explained Jerome Armstrong, the proprietor of MyDD.com, who co-wrote a book with Moulitsas on Democratic blogging. "They are becoming sort of conflict avoiders in the primary."

A recent unscientific poll of DailyKos readers confirmed that Clinton had much less support on the site than among Democrats generally, with Obama and Edwards leading the pack. But during Clinton's breakout session with bloggers Saturday, she was not asked a single question about her vote to authorize the Iraq war or her plans for withdrawing troops. The questions, instead, had all the noncombative flair of an upstate New Hampshire town hall meeting. What would she do about education reform? What did she think about welfare reform and gays in the military? How would her attorney general be different from Gonzales? "I think it would be a breath of fresh air to have an attorney general who actually believed in the rule of law," Clinton said, earning immediate cheers.

Last summer, when YearlyKos met in Las Vegas for its inaugural convention, such harmony was difficult to imagine. Prospective presidential candidates seemed desperate to ply bloggers with drink and attention. Wesley Clark threw a riotous party for bloggers at the Hard Rock Casino, while former Virginia Gov. Mark Warner spent around $50,000 to entertain bloggers with a John Belushi impersonator and a chocolate fondue waterfall at the top of the Stratosphere casino. At the time, all the buzz was about which candidate could win over the blogs. Even Moulitsas got caught up in the frenzy, comparing the Warner party to a "first date."

A year later, it is hard to see how any single Democratic candidate emerges before the primary as the prohibitive choice of liberal bloggers. Instead the various campaigns are fighting a battle of margins. Not a single candidate or campaign threw a party at this year's conference. "There is just not critical mass moving to one candidate right now," said Joe Trippi, the former Dean campaign manager who is now overseeing the Edwards campaign. "Every campaign has been competing like crazy for every inch they can get on the Internet and the blogosphere."

Another prominent blogger, Matt Stoller, who recently co-founded OpenLeft.com, described what was happening to progressive blogs as a temporary loss of liberal momentum. "People feel confused," he said. "Because that's what happens to a movement that hopes if you get Democrats elected it will solve some of our problems, and then our problems aren't solved." He predicted that the blogs will again find their voice on intraparty matters once it becomes clear that the current crop of presidential candidates do not sufficiently represent the liberal cause on everything from telecommunications laws to military withdrawal from Iraq.

But the collective neutrality only goes so far. Even if most bloggers decide to sit out the primary, there is little doubt that they will be back with a vengeance to show their Democratic stripes once a nominee is chosen. The only candidate who was booed louder than Clinton at Saturday's presidential debate was the unlikely left-winger Dennis Kucinich. He made the mistake of aping one-time presidential candidate Ralph Nader, who regularly attacked the Democratic leadership as a bunch of sellouts. "Why don't people vote?" Kucinich asked, rhetorically. "It's because they don't think there is much of a difference between the two parties."

The booing immediately drowned Kucinich out. He had committed a cardinal sin, demeaning the Democratic Party before a crowd that works countless unpaid hours a week to make the party stronger. He had also provided, inadvertently, another reason for Clinton to smile. The YearlyKos community may not be her most natural constituency, but it is also unlikely to be her enemy. All she has to do is keep showing it respect.