In Iowa, the Republicans fight for second -- and survival

Mitt Romney will almost certainly win Saturday's straw poll, but Huckabee, Tancredo and Brownback are locked in a bare-knuckle battle for runner-up. 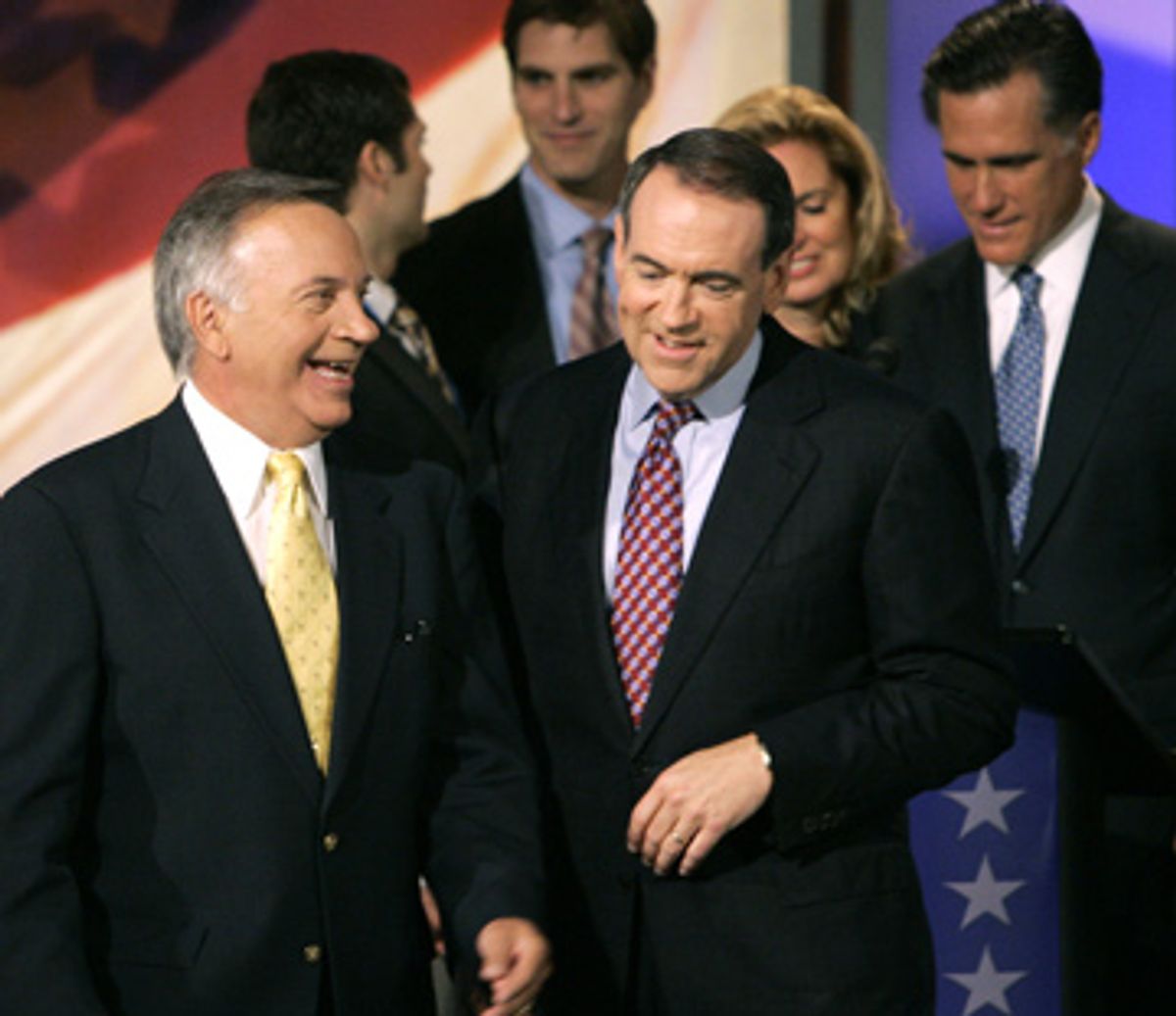 Like every other presidential candidate, Republican Mike Huckabee says he wants to run a clean campaign on the issues, free of negativity or character assassination.

"I'm not just spending my time trying to bash other candidates," the former Arkansas governor told a few dozen supporters who had gathered in front of the Boone County courthouse Wednesday afternoon. "You know, I believe the best way to win a campaign is to be able to hit the three-point shots from out on the perimeter, not by going up under the goal and elbowing somebody or kneecapping them."

But Huckabee does not control the game in Iowa these days, which has more in common with a Bronx street ball tournament than a refereed NBA matchup. Many in the Republican field are fighting for their very survival, which may depend on what happens Saturday, when up to 30,000 Iowa Republicans gather in Ames for the Hawkeye straw poll. The stakes are highest for the second-tier candidates like Huckabee, Kansas Sen. Sam Brownback, and Colorado Rep. Tom Tancredo, who have been traversing the state with fast-break speed in recent days. Former Massachusetts Gov. Mitt Romney is widely expected to win the poll, which tests both popularity and campaign organization, since his major rivals, John McCain, Rudy Giuliani and Fred Thompson have decided not to compete.

But in the race for second place, almost all of the second-tier candidates have begun throwing their elbows in recent weeks, resulting in a rising tide of recrimination. Brownback has used pre-recorded phone calls, or autodials, to attack Romney and Tancredo for being insufficiently pro-life, a charge both candidates refute. "It's just kind of petty, unclean politics," says Bay Buchanan, Tancredo's campaign manager. "Sen. Brownback's campaign has been less than honorable."

Brownback's staff has also called Iowa Republicans with a script that uses the name of Bob Vander Plaats, a popular state Republican and past candidate for governor and lieutenant governor. The callers did not mention that Vander Plaats is the chairman of the Huckabee campaign in Iowa. "I just think that you donb

At a town hall meeting in Story City on Monday, Brownback talked at length of his concerns about Romney's history of changing positions on issues like abortion, guns and taxes. "Even pornography, where he was on the board of a major corporation when they were selling pornography, and now [he thinks] it's all terrible," Brownback said after the meeting, referring to Romney's work for the company that owns Marriott hotels, which provides in-room adult movies. "There have been these enormous inconsistencies on core topics."

Tancredo, meanwhile, has been running radio ads across the state calling his competitors in the Republican field "amnesty politicians," because they have not ruled out supporting a path to citizenship for the nation's illegal immigrants. On Thursday morning, Tancredo told nearly 100 supporters at a diner in Ottumwa that his rivals were just doing what they had to do to get the nomination. "They can say anything that they need to say, because they focus-grouped it. And they don't have any qualms about it," Tancredo asserted, without naming any specific rivals. "I'm not flying any false flags here."

At the breakfast event, his campaign staff handed out a photocopy of a Washington Post story that noted Brownback's past support for a bipartisan immigration bill that would have given most illegal immigrants an opportunity for citizenship. A second glossy flier showed pictures of Romney, Brownback and former Wisconsin Gov. Tommy Thompson under the headline, "Meet the Pro-Amnesty Politicians."

Supporters of Huckabee, meanwhile, have been throwing their own elbows. Two weeks ago, a Huckabee booster and evangelical pastor named Tim Rude sent friends an e-mail calling into question Brownback's faith. "I know Senator Brownback converted to Roman Catholicism in 2002," Rude wrote. "Frankly, as a recovering Catholic myself, that is all I need to know about his discernment when compared to the Governor's." Huckabee later condemned the anti-Catholic message in the e-mail, and Rude apologized. At about the same time, a person who claimed to be a "volunteer in Iowa for the Huckabee campaign" used a Gmail account to send messages to the media with opposition research on Tancredo. Eric Woolson, Huckabee's spokesman in Iowa, insisted the campaign had no knowledge of these e-mails. "I am disappointed that anybody would be doing that, and Governor Huckabee would be as well," Woolson said.

But even Huckabee himself, an ordained Baptist minister, has not stayed completely above the fray. Just minutes after delivering his basketball metaphor, Huckabee began criticizing his Republican rivals who serve in Congress. "You got to ask the question," he told the same crowd in Boone. "If they haven't been able to get the job done in Congress, why then would we give them the White House?"

After his talk, I asked if he thought voters should be concerned about candidates like Romney, who have shifted their positions. "Voters have to look at that, whether it is me or whether it's somebody else," he said. "If we have ever-evolving positions on fundamental key issues, we need to know why did we have them before, how did we get to them now and how do we know we won't change them again?"

But he declined to criticize Romney directly. "I'm not going to say anything unkind about the man," he said. "I'll let the voters sort out and shake out the positions and the changes thereof." Then Huckabee argued, for a second time in 20 minutes, that he wanted to take the high road as the primaries move forward. "There are plenty of people in this primary throwing sharp elbows right now," he said. "There is a short line for people who want to keep it straight and upbeat, and I want to be in the short line every time I get a chance."