From tears to cheers: Huckabee's surprise second in Iowa 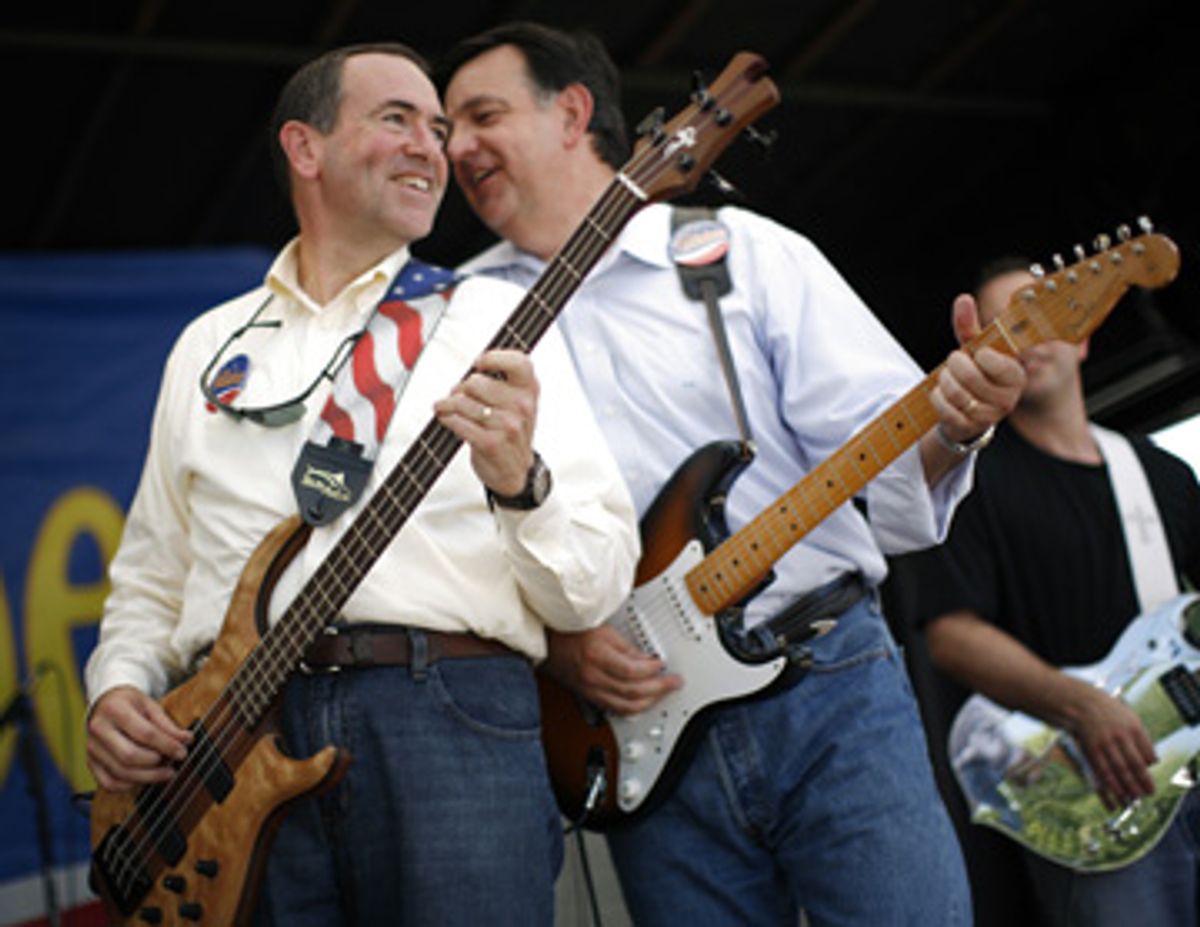 A couple of hours before the victory, there were the tears.

At around 5:30 p.m. on Saturday, former Arkansas Gov. Mike Huckabee gathered his volunteers under a great white tent built on parking lot pavement to thank them for supporting him in the Iowa Republican straw poll. "You have taken a minimal amount of resources and had a maximum impact," he told them.

At about that point, Huckabee's field director, who is also his 25-year-old daughter, Sarah, lost it. Her face turned red, her eyes overflowed, and she began wiping at her cheeks, over and over again. She was exhausted, for sure, having spent a long day in 90-degree heat after weeks traversing Iowa. But there were also nerves at play. A poor showing in Ames would likely mean the end of her father's campaign, which had struggled for six months, polling in the single digits and raising a piddling $1.3 million. "Regardless of the straw poll results we got something going," the candidate said, keeping hope alive.

Everyone knew that when the votes were counted in a few hours, former Massachusetts Gov. Mitt Romney would win the straw poll, which is as much a test of money and organization as popularity. Romney, who spent $32 million through June, was the only Republican candidate competing on Saturday with the help of large-scale broadcast advertising, hundreds of paid staff, more than 100 buses to bring people to Ames, and about 40 golf carts to move people around on the grounds of Iowa State University. The other top-tier candidates, Rudy Giuliani, John McCain and Fred Thompson, had all decided to sit out the straw poll, ceding Romney the victory.

The question was who would come in second, and at 5:30 the signs did not look good for Huckabee. Both of his nearest competitors, Kansas Sen. Sam Brownback and Colorado Rep. Tom Tancredo, had purchased more of the $35 straw poll tickets that allow people to vote, rented better tents and acquired more buses. Brownback's staff claimed to have handed out more than 3,000 tickets and hired 51 buses. They even brought in a Christian metal band called Nailpoint Payment to play for supporters. Tancredo gave away about 2,400 tickets, used 20 buses and paid for an aggressive talk radio advertising campaign, according to his staff.

Huckabee, by contrast, had no buses, no broadcast advertising and 1,850 tickets. "Let me make it very clear today: I'm not the best-funded candidate in America," Huckabee had admitted early in the afternoon, in his address to straw poll voters. "I can't buy you. I don't have the money. I got another thing: I can't even rent you."

But when the votes were all counted at 8:30, Huckabee beat the odds, surprising the other campaigns and many in the political press corps. "Holy shit," exclaimed one reporter when the results were read -- Romney, 4,516 votes; Huckabee, 2,587 votes; Brownback, 2,192 votes; and Tancredo, 1,961 votes.

A few minutes later, Huckabee was charging toward the pressroom to declare victory, abandoning his earlier plan to let Romney and Brownback hold their press conferences first. "Hey, seven weeks ago, would anybody have thought about this?" Chip Saltsman, Huckabee's ecstatic campaign manager, called out to another supporter. Sarah Huckabee was also in tow, bearing a smile as wide as her face. "I think 'Free Bird' is what did it," Huckabee told the press scrum, referring to the fact that his band, Capitol Offense, had played the Lynyrd Skynyrd anthem earlier in the day for voters. "When 'Free Bird' can play to the voters up north, you know you have a winning combination."

The key to Huckabee's second place finish was the block of roughly 700 voters who either paid for their own tickets or had another campaign or organization buy their ticket. Not everyone who boarded Romney's buses, for example, planned to vote for Romney. Earlier that morning, Joe and Edie Morr, a 70-year-old couple from Ankeny, Iowa, disembarked from a Romney bus with every intention of voting for McCain, who only earned 101 votes at the poll. Joe said he met Edie when they were both 18 years old in the Navy, and he had served on the USS Forrestal, an aircraft carrier where McCain served in Vietnam. "We got a free hamburger, a T-shirt and a fan," Morr said of his Romney bus ride, though he decided not to wear the bright yellow Romney T-shirt. "I'll use it when I get home and work in the yard," he said.

The full impact of the straw poll may not be known for days or weeks. Two days after the 1999 Iowa straw poll, which President Bush won by a margin similar to Romney's, Tennessee Sen. Lamar Alexander dropped from the race. But this year was different, in several ways. Not only did many of the top Republican contenders not compete, but the turnout dropped considerably, from 23,685 votes cast in 1999 to just 14,302 votes on Saturday.

The longshot candidate Texas Rep. Ron Paul also outperformed expectations, placing fifth with 1,305 votes, even though the campaign only purchased 800 tickets, according to his spokesman. Paul clearly gathered even more attendees than voters, people like Jeff Molby, a software engineer from the Detroit suburbs, who stopped by the poll on his way to California for a wedding. "My brother and I decided to make a huge road trip out of it," he said. When Paul was asked before the polls closed how he would do, the Libertarian candidate was somewhat circumspect, since only Iowans were allowed to vote in the straw poll. "We'll have to find out if we got anyone from Iowa," he joked.

The most immediate impact is likely to be the exit of former Wisconsin Gov. Tommy Thompson, who placed sixth with 1,039 votes. Thompson has said repeatedly in recent weeks that he was unlikely to continue the campaign if he did not win or place in the poll. Like Paul, a visible portion of Thompson's supporters, motorcyclists who wore black T-shirts, were from out of state. Whole portions of Thompson's speech to voters Saturday had the whiff of a farewell address. "It's quite an honor to run for president of the United States," Thompson said. [On Sunday night, Thompson announced he was dropping out of the race.] Brownback and Tancredo, meanwhile, are destined to continue their campaigns, having met their own vague benchmarks of placing in the top half of the field. (Rep. Duncan Hunter, R- Calif., who did not seriously contest the poll, bought only 100 or so tickets and tallied 174 votes, ahead of John McCain but behind Fred Thompson's 203 and Rudy Giuliani's 183.)

The impact on Huckabee, meanwhile, will be measured largely in fundraising dollars over the coming weeks. Historically, 85,000 to 105,000 Republicans vote in the Iowa Caucuses, making a few thousand straw poll votes far from determinative on Election Day. But Huckabee told reporters that he is hoping the results Saturday will signal that he is a serious contender to wealthy Republicans. "All those people that told us if we got some traction they'd be with us, well we've got the traction. They should be with us," he said.

If he does get traction in the form of campaign checks, Huckabee is likely to position himself as a candidate who can unite the country, even though he takes more conservative positions than the leading Republican candidates. An ordained Baptist minister, he is vocal about his religious beliefs, unassailably pro-life, a skeptic of evolution and an opponent of gay marriage. He was helped at the straw poll by supporters of Christian home-schooling, and the poll results may mean that Huckabee, at least on Saturday, won the duel with Brownback for evangelical voters, who will loom large in the upcoming caucus. His showing may also reflect his enthusiastic backing of the so-called Fair Tax, which would replace the national income tax with a national sales tax. Fair Taxers were well-represented at the straw poll, even bringing a Fair Tax ferris wheel.

Despite these views, Huckabee packages himself in a largely populist message, which he can deliver with uncommon skill on the stump. On CBS' "Face the Nation" Sunday morning, he restated the central thesis of his campaign. "I am one of the few Republican candidates that's having the courage to talk about how we need to really separate ourselves from being the Wall Street Republican crowd. We need to be the Main Street Republican crowd," he said. "We need to quit being a wholly owned subsidiary of the major fund managers on Wall Street and start being more concerned about the people out there in places like Iowa."

Though the straw poll results are largely symbolic, it's a refrain that more Americans may be hearing soon. But not right away. First Huckabee is going back home to Little Rock, Ark., to take some time off. "I am dying to see my dogs," he said Saturday night, after the results were announced. "I haven't seen them in over two weeks. And I hope they can remember me."