The family that backpacks together

My grandfather started hiking in the Sierra 70 years ago. It's a tradition that keeps our clan together -- and lets indifferent nature caress our souls. 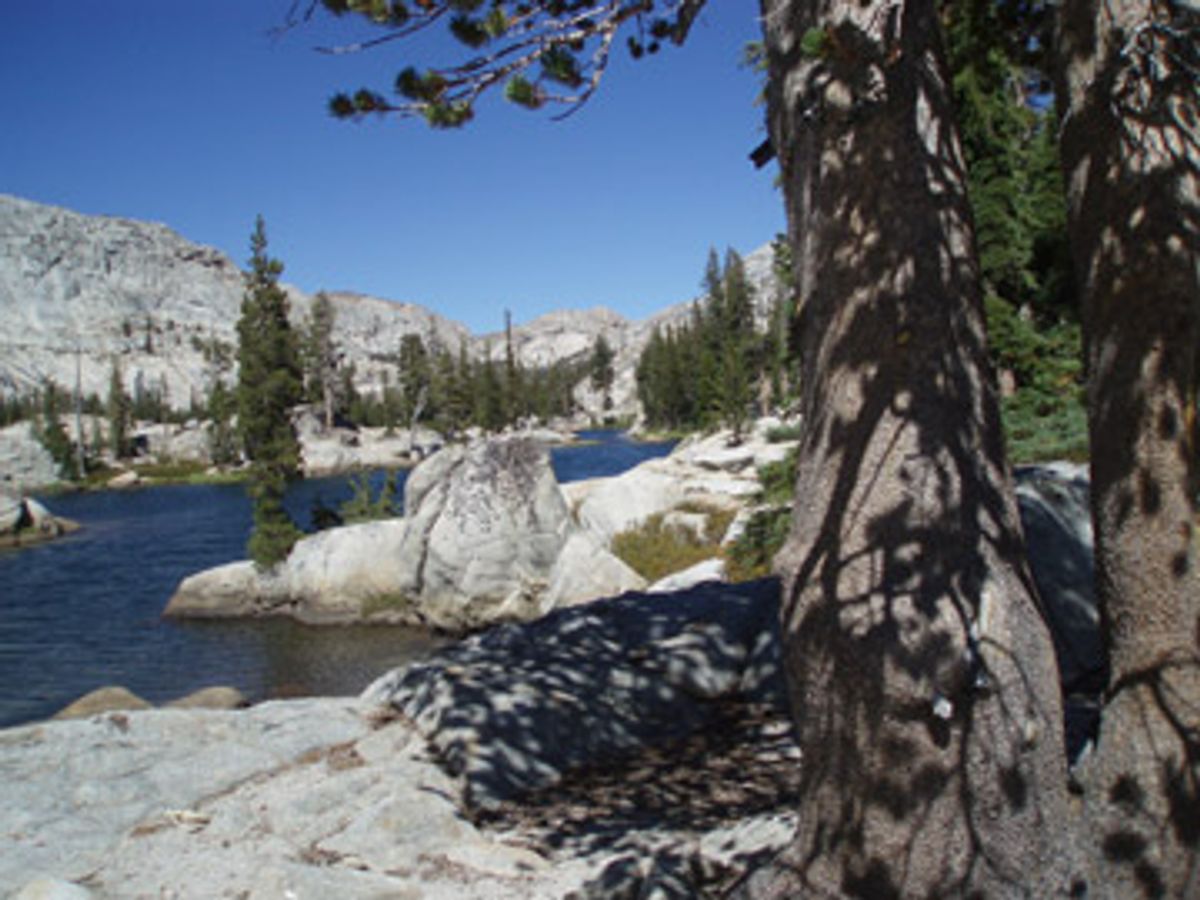 I was lying in my sleeping bag about midnight, looking up at a vast bowl of stars, when a shrill shriek pierced the blackness, coming from someplace to the north. The high wail was followed immediately by a confused cacophony of barks and grunts and more keening cries, a silvery many-tongued outcry moving rapidly from west to east. My dog sat bolt upright, ears pricked up, quivering in every muscle, as if he instantly knew that these were savage relatives who could kill him. The yelps and cries faded, disappearing in the direction of the high mountains. They left an impression of wild, unstoppable power, as if a dark caravan had ripped through the night. That run of the coyote pack -- were there three of them? six? 10? -- echoing from somewhere on the vast 600-foot-high granite face on the north side of Buck Lake, stayed with me all day. It felt like the magnificent and terrifying voice of the wilderness itself.

My grandfather first went to Buck Lake, in California's Emigrant Wilderness, just north of Yosemite, in 1937. He and his buddies hiked 16 miles to the lake (his pals rode horses part of the way, but he insisted on walking) and spent a week or two fly-fishing, telling tall tales and having a great old time. Grandpa's Buck Lake trips went on for 30 years, until he was in his 70s, and became a part of my family's lore. Grandpa was born in 1894, and he remembered a horse-drawn wagon trip he and his family took across Northern California as the great adventure of his life. He started delivering the mail on a rural route in a horse-drawn buggy. He was part of that single, remarkable generation of Americans who went from growing up in an agrarian-dominated society before cars -- a life in many ways little different from that of a medieval peasant -- to witnessing the moon landing.

In those days, just about every man who lived in the country hunted and fished. Grandpa, a tough hombre who drove stove oil and gasoline trucks across the Central Valley for years, and prided himself on his ferocious physical strength, was no exception. I remember marveling at his fly rod, and how he could drop his fly on a fish's nose 30 yards away so gently that it didn't make a ripple when it hit the water. We grandchildren were all scared of his 12-gauge shotgun with its legendarily painful kick and could barely muster the nerve to blast tin cans with a .22.

My grandparents bought a 320-acre ranch in the Sierra foothills above the Gold Rush town of Murphys in 1943. A fair chunk of my mother's side of the family lives there, and those of us who live elsewhere have been going up there ever since. More than any other single thing, the ranch has held our unruly clan together. It also helped instill an abiding love of nature in us. But grandpa's hunting and fishing legacy died with him. Grandpa took my uncle David, one of his four children, out deer hunting a few times, but David was so appalled when he shot his first buck that he inwardly vowed never to do it again. He gamely went out on a few more hunts but never again pulled the trigger even when looking down the sight of his .270 rifle at a deer. Grandpa, who was a kind man, understood and didn't insist. The rest of us also failed to become sportsmen. Only one of his children -- his youngest daughter, Aunt Wendy, who had dreams of being another Annie Oakley -- took up the gun or rod, and practically none of his grandchildren have.

But the Buck Lake tradition didn't die. Grandpa never took his own children there, but David decided to revive the expeditions. He organized a backpack with his two sons and two of his nephews, my cousin Jonathan and me. We hiked in and had a glorious time. That was 32 years ago, and various combinations of the clan have been going in ever since. We're the newfangled breed of outdoorsmen -- we go into the high country just to be there. My brother went in with his daughter when she was a babe in arms. We took my mother on her first trip to Buck when she was 64 years old. I can still remember the deep joy on the face of my late uncle Bob, who was a sociology professor at CUNY, when we first climbed to the top of the face above the lake, an easy ascent that to a novice looks like climbing Everest. On my last trip there, I had to leave early and hike out alone, and fast, because a horseman from the pack station rode in and left a message that my wife, who was seven months pregnant, was having difficulties and might be about to give birth.

That was 11 years ago, and the little girl who was supposedly about to make a premature entrance into the world (she didn't) is now 10 years old. Last week I took Celeste and my 18-year-old son Zachary into Buck for the first time, joining my mother, who's now 77, Uncle Dave, who's about to turn 70, Dave's partner, my brother and sister and their daughters, and cousin Jonathan. The concession we made to age and hedonism was hiring a mule train to carry our gear, allowing us to sit in chairs, eat salmon pasta and fresh vegetables, and drink wine at 8,300 feet.

I've taken Celeste on hikes into the high country before. She made her first trip, to Thousand Island Lake beneath Ansel Adams' beloved Mount Ritter, when she was not yet 3 years old. She made it fine, although she demanded that I tell her stories every step of the way, threatening to stop every time my increasingly threadbare and banal narratives gave out. At the time that "Thousand and One Nights" routine was wearying, but as we walked in this time I felt a pang remembering it. Celeste didn't want to go, didn't want to be separated from her backpacking-averse mother and her toys and her computer and her TV. I had to insist that she come. As she trudged dutifully along the trail through a stand of lodgepole pines at 7,500 feet, breathing hard, I hoped that she would learn to enjoy it, this strange activity of sweating for miles and miles through thin air to reach a place where all there was to do when you got there was nothing.

To tell the truth, I wasn't exactly enjoying it myself that first day, popping ibuprofen as I staggered along, bringing up the rear. I couldn't believe I used to walk the entire 16 miles in one day carrying a 40-pound pack. By the end of our 10-mile trek to Gem Lake, everything hurt. The years of Camels and margaritas and sitting on my sorry ass had caught up with a vengeance. It all seemed pointless, a foolish exercise in physical masochism and specious communing with nature.

But that was just the usual first-day blues. I knew all the sweat of getting into paradise would be worth it. And sure enough, the world became perfect again, just as it always has whenever I've gone into the high country.

This time it happened on the third day, on the way back from a day hike to Emigrant Lake. As we walked through an alpine meadow under two vast gray granite peaks, shaded by hemlocks with their whimsical falling-over tops, and a wild wind came in from the west blowing good news, I was back, here and now, and this great and peaceful wilderness was the same old friend it had always been.

The Sierra Nevada in summer is the most tranquil of mountain ranges. The sun shines almost every day. In the Alps you can get killed on a stroll in July, but storms are rare here. And the Emigrant is the gentlest part of the Sierra I know, 118,000 acres of granite canyons and alpine meadows studded with hundreds of gemlike lakes. At Buck Lake, the very landscape seems childlike and trusting. For 30 years, I've been sleeping on one of the exquisite little peninsulas that extend out into the lake. Like natural playhouses, these peninsulas each have their own unique architecture, their own miniature beaches, granite walls, stands of trees, custom-designed swimming coves. This is wilderness that seems to hold out its hand to you, which never changes no matter how many years go by, which is always happy to see you.

Of course, the great and abiding mystery of nature is that it isn't happy to see us, is utterly indifferent to us -- and yet still caresses some inner part of us. Maybe that's because that inner part, like a tree or a mountain, is itself a piece of the eternal world and recognizes its touch. I don't know, but I do know that up here in the warm silence it's impossible not to think of the world as in some way a partner and not just as a cold, external force. And it's that recognition, akin to looking at the face of someone you love, that brings us to the wilderness. We come to the mountains, or the sea, or anywhere the world is still pure and untouched, to feel that harmony. The warm sun filtering through scented pine dust is part of it, and so is the dark cry of the coyotes on their midnight run. The tiny gentians blooming at the treeline, and the fallen red fir, its mighty furrowed bark decomposing and feeding other life.

It was a great week, as always, full of stories and laughter and my sister's amazing food and the deep ease of being with one's family. It was also the last time we'll all go to Buck Lake. My mother, amazingly strong as she is, doesn't want to subject herself to that long hike again. We'll go into the high country again, but not here. As we left beautiful little Red Can Lake, to which we had bushwhacked on a day hike, she took a last look, tears in her eyes, and said, "I may never see this again."

I don't know if Celeste will take to hiking. She got stronger and beat everyone into camp on the 10-mile hike the first day going out, but she wasn't that enthusiastic. It might not be her thing. Zachary, though, looks like a lifer. The family tradition will go on. Some will take to it, some won't. That's the way families and traditions are.

I'll probably be able to haul my arthritic knees up to Buck at least one more time. But if I don't, I'll save a special place in my heart for it. Because the friendly peninsulas will always be there, under a noon sun, the lake sparkling behind them. The great stone face on the north side of the lake will not fall. The vast bowl of stars, hieroglyphs of wonder, will appear every moonless night from now until the end of the universe. These things are real. And they will wait patiently for me to remember them, to summon back a world that is now, and will always be, perfect.