As he struggles to move up in the polls, Edwards begins taking not-so-subtle digs at his rivals -- Hillary Clinton and Barack Obama. 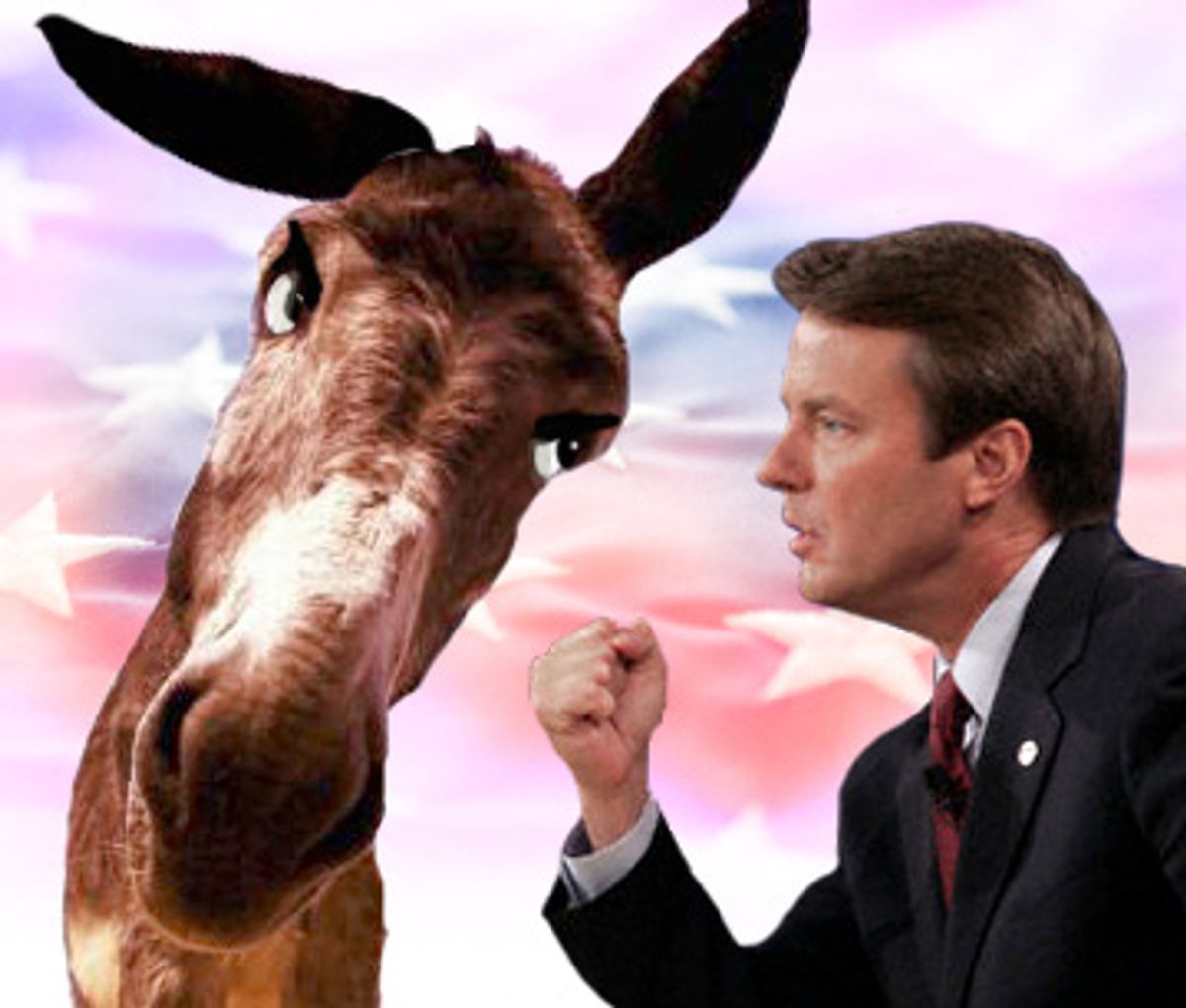 Last week in Hanover, N.H., John Edwards shot off a rhetorical signal flare. "I want to go one step further," he said. Something new was coming. This wasn't going to be just another stump speech about the "Two Americas" -- one for the rich and one for everyone else. He was about to attack his own party, the Democratic Party, which he likes to call "the party of the people."

Of course, he never named the fellow travelers targeted by his broadside. But he left plenty of clues, given Hillary Clinton's time in the White House and Barack Obama's record fundraising. "The American people deserve to know that their presidency is not for sale," he said, "the Lincoln Bedroom is not for rent, and lobbyist money can no longer influence policy in the House and the Senate."

In one way, the onslaught was not surprising. In the ecosystem of the Democratic primary, Edwards is both the liberal lion and the populist prairie dog. He loves bashing corporations and their big wallets, and he often blames lobbyists for the nation's ills. It's a tried and true posture. He won his first Senate race in 1998 as the self-branded "People's Senator," running numerous ads that tied the incumbent Republican to "PACs and Washington lobbyists." He won a slot on the Democratic ticket in 2004 by promising to blur the dividing line between the haves and the have-nots.

But this summer, as he has struggled to gain traction in the polls in the early primary and caucus states, Edwards has taken a new turn. For the first time in his career, he is running for office by criticizing segments of the Democratic Party, the institution he has long held up as the only hope for restoring economic justice in America. In particular, he has tried to paint Democrats who continue to accept money from corporate lobbyists or political committees as part of the problem, not the solution.

According to his campaign advisors, the goal of the criticism is to make the Democratic Party stronger and more united, especially in a general election when Republicans can be painted as the party of corporate interests. "This is a way of lifting the party up and showing it a way forward," says Jonathan Prince, Edwards' deputy campaign manager. "It's not just about money in politics, per se. It's the way that money influences the system to prevent progress and change. It's how that affects healthcare. It's how that affects the minimum wage."

In interviews over the past week, Edwards' campaign advisors made no bones about the impact they hoped to have with these words. The new speech is meant to distinguish the campaign from others in the Democratic field. "We wanted to define the race," said Edwards' senior advisor Joe Trippi, who also managed the 2004 Dean campaign. "We wanted to put a choice that we think is pretty clear now before the American people." And the message originates with the candidate, say his advisors, not the people around him: Edwards wrote much of the new speech himself.

According to the Edwards campaign story line, the choice amounts to this: Edwards is the only candidate seeking "bold" change that would attempt to strip powerful moneyed interests of their power in Washington, a first step to passing a progressive slate of legislation through Congress. By contrast, Clinton is painted as the candidate of compromise and entrenched interests who will not be able to deliver on real change, just as she was not able to deliver on healthcare reform in the early 1990s. Obama, meanwhile, is seen as a respectable campaigner who is too timid for the bold leadership that will be required.

They are story lines that Edwards has been developing throughout August, most notably at the YearlyKos Convention for liberal bloggers in Chicago, where Clinton made the factually accurate -- if politically foolish -- assertion that many lobbyists represent "real Americans." Within minutes of her comments, the Edwards campaign distributed a press release calling on all the candidates to reject campaign contributions from lobbyists, a policy that Clinton has rejected. In a breakout session with bloggers minutes later, Edwards took on the New York senator by name. "Senator Clinton made clear that she intends to continue taking Washington lobbyist money," he said. "So the choice is very clear."

A couple of weeks later, Edwards sent an open letter to Obama, asking him to join in calling for the Democratic Party to ban all lobbyist contributions to any federal candidate or committee, a clear ploy designed to tarnish Obama's appeal as a reformer. (Edwards' proposal would still allow political donations from corporate executives and trial lawyers, a major source of funds for the Edwards campaign.) Obama, who has already announced that he will not personally accept lobbyist money, declined Edwards' invitation, choosing instead to invite Edwards to endorse his plans for campaign finance reform. Edwards responded on Aug. 20 with a second letter, which clearly grouped Clinton and Obama together as opponents of "bold change." Wrote Edwards, "We need to put an end to the money game altogether."

Behind the scenes, Edwards' advisors continued to highlight the differences in the Democratic field. Trippi claimed the other presidential campaigns opposed banning lobbyist contributions because they did not want to upset Democratic leaders like New York Sen. Charles Schumer, who is in charge of fundraising for the party's Senate candidates, a task that depends heavily on lobbyist contributions. "We are talking about really ticking off some of the Democratic Party establishment," Trippi said. "The tougher step is to say if it's good enough me and it's good enough for Barack Obama, [why] isn't it good enough for the Democratic Party?" Trippi said he believed Obama was not working to ban all lobbyist money because "he has to walk into the Senate cloakroom."

David "Mudcat" Saunders, a Virginia-based political consultant who is working as Edwards' national rural liaison, was even more direct in criticizing the other two major Democratic candidates. Saunders doubted whether Clinton was electable in many parts of the country. "I mean, we are going to lose blue states," he said, speculating on what would happen in November 2008 were Clinton to get the nomination. As for Obama, Saunders thought the Illinois senator had yet to establish his goals in concrete terms. "Obama hasn't said enough," Saunders insisted. "He's for hope. I'm for hope. You can quote me on that. That's all I know about Obama."

The Edwards strategy of using campaign finance issues to draw distinctions with Clinton and Obama has been employed with mixed success in the past. "Ross Perot did it in 1992," says Democracy 21's Fred Wertheimer, Washington's premier lobbyist working to reduce the influence of money in politics. "In 2000, it was kind of the organizing theme of McCain's campaign." This year, with congressional corruption still fresh in the minds of many voters, the stage is set for another money-in-politics-themed campaign. A Gallup poll released Wednesday showed that three in four Americans believe it is unacceptable for "Washington lobbyists" to give money to federal campaigns. (On the other hand, public financing of campaigns, which is supported by Edwards, Obama and Clinton, was unacceptable to nearly three in five.)

So far, both the Clinton and Obama campaigns have mostly avoided engaging Edwards' new critique of his fellow Democrats. The Obama campaign provided Salon with a statement disputing Edwards' claim to the issue of corporate influence. "Obama has done more to curb lobbyists' influence than anyone else in this race and has the furthest reaching plan to fundamentally reform government and shut the revolving door between the White House and K Street," wrote Jen Psaki, an Obama spokeswoman, in an e-mail. Clinton's advisors dismissed Edwards' speech by issuing talking points to the media that read, "Angry attacks on other Democrats won't improve Senator Edwards' flagging campaign."

Edwards, meanwhile, has tried to shoot down reports that his retooled stump speech is a direct attack on other Democrats. "Nothing I said yesterday has to do with other presidential candidates," he told reporters the day after the Hanover speech. Of course, he followed that statement with yet another attack on his rivals. "They need to move on from thinking about themselves and think about what's important to the country."

No doubt such sniping will soon become a standard feature of the Democratic contest. Edwards' rejiggered strategy was debuted during the hot days of August, when America vacations and teen beauty queens dominate the news cycle. The race -- and the rhetoric -- have really just begun. "There has been a campaign going on," explained Saunders. "But right now the rubber is hitting the road. It's Labor Day."