At the home for retired advertising icons, not everyone's happy to see the Geico Cavemen hit the big time. 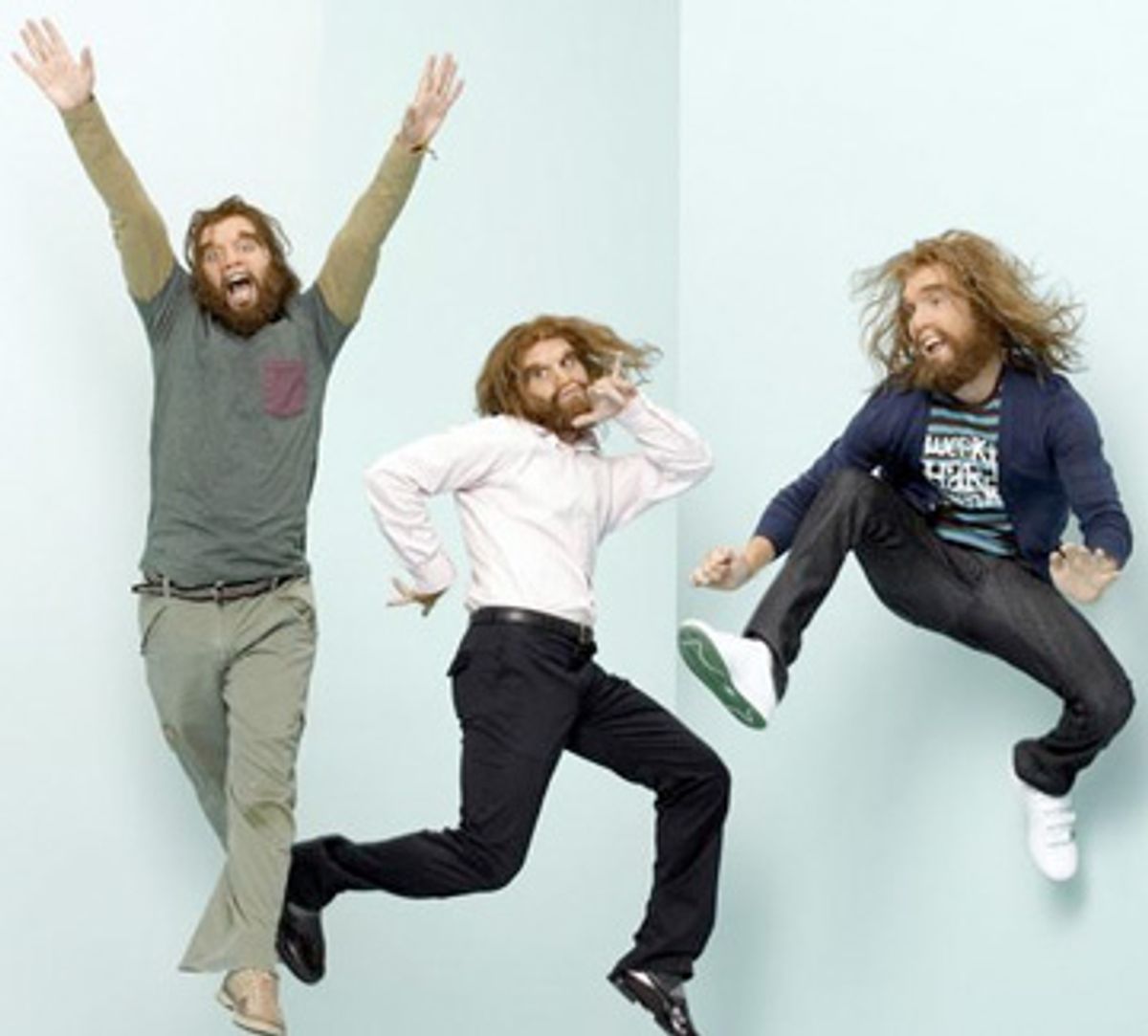 The John Cameron Swayze Home for Retired Advertising Icons, a converted three-story Victorian mansion on a quiet cul de sac in Santa Barbara, Calif., is a deceptivey peaceful place. Beyond the manicured lawn, behind the pleasant sky-blue facade, the home is a cauldron.

"They're all pretty miffed," the Maytag Repairman told me over the phone. He said he'd looked into moving in last year when a corporate takeover put his future in doubt, but found the place "too negative."

"It's all worked out for me so far," he said, "but even if it hadn't, I just couldn't deal with all that bitterness."

What's got them crying like Iron Eyes Cody at the home? "Cavemen," ABC's new sitcom starring a trio of prehistoric dudes who got their start pitching auto insurance. (The show premieres Oct. 2 at 8 p.m. EDT.) "You watch," the Repairman told me, "every single person in that house thinks they should have their own series. If you're breathing, they'll try to get you to read their script. In fact, what's your address? I've written a little something in my free time."

With an introduction from Ol' Lonely, I paid a visit to Swayze, as residents call it, and immediately saw what I'd been warned about.

"Do you know who I am?" Karl Malden barked at me as he answered the front door.

"Twenty-one years keeping American travelers safe from theft," he growled. "I was all over the world. I've got stories, mister. Ten seasons' worth at least. Everyone knows I can carry a TV series. I carried that punk partner of mine every Thursday night. And they give a show to a bunch of insurance-selling cavemen instead of me? What are they thinking?"

"I think most people think you're dead," I said, as politely as I could manage.

"Well, they better wise up," he grunted and motioned for me to follow him in. He took me to the kitchen and introduced me to a pleasant woman named Madge and a guy named Mike, who looked way too young to be living in a retirement home. Mike sat next to me and ate a chocolate bar. "Mmm, chocolate," he said. We all sat and talked for a while and I tried to place Madge. Finally, she said she used to pitch Palmolive dish detergent.

"You know, you're soaking in it," she said just as another fellow walked through the swinging kitchen door eating from an open jar, saying "Mmm, peanut butter."

"Palmolive?!" I shrieked, yanking my hand back and accidentally elbowing Mike, who recoiled, sending his candy flying -- right into the peanut butter!

"You see how I did that?" Madge said, ignoring the ruckus. "I've developed a reality show where I trick people into --"

"You got chocolate in my peanut butter!" the new guy roared at Mike, who ran up to him and glanced cartoonishly from the guy's face to his chocolate bar, half-buried in the goo. "You got peanut butter on my chocolate!" Mike said.

They each took a bite of the chocolate. Madge nudged me and nodded at Mike. "He won't like it," she said. "He hates everything."

Mike wheeled on us.

Madge sighed and looked away. I said, "I don't follow."

"A show with three guys," Mike said. "You want a show about three guys? You tell me, what's gonna be better, three brothers going through life together, challenging each other, pushing each other to try new things, talking at the breakfast table? Or three cavemen with bad fake beards trying to score chicks over Smirnoff Ices? Huh? You tell me."

"Ah can answer that, mate," came a cockney accent from the floor. We all looked down. There was a lizard under the table. "But you wouldn't like it, know wha' ah mean?" He handed up a tiny sheaf of papers to me, saying, "'Ave a looka this, woodja boss?"

I stared at the lizard. He's not retired, I thought. He must have read my mind. "Visitin' me old fruit Spuds Mackenzie," he said.

The whole scene was getting a little too weird for me, so I excused myself and went into the bathroom. I was feeling queasy and lightheaded. I opened the medicine cabinet door and about jumped out of my shoes when I saw a man's face looking back at me.

"Hi, guy!" he said. "Remember that next-door neighbor in 'Home Improvement?' My shtick, guy. You think I ever see a cent from that?"

I slammed the cabinet shut, staggered to the toilet and sat down. I was starting to hear voices. Wait, it was one voice, coming from inside the toilet. I lifted the lid on the back. There was a guy in a rowboat.

I flushed and headed back out. I thought I saw O.J. Simpson running down the hallway and leaping over a sofa, car rental contract and overcoat in one hand, script in the other. A tabby cat caught my eye and made a big show of ignoring its food bowl. I noticed a treatment for something called "Law & Order: Mouse and Bird Unit" on its bed.

Malden was in front of me again. "Charlie the Tuna wants to host 'Great Performances,'" he said. "Mother Nature's got a game show where contestants try to fool her. Mrs. Olsen thinks she can do a sort of 'Nanny 911' for young married couples, even though the only advice she ever has is to open a can of instant cofee."

He sighed. "All these people have paid their dues, and it just kills them that these cavemen came out of nowhere and got a show. These folks deserve something." I thought Malden was fighting back tears. His voice cracked a little as he said, "I bitch and moan too, but for me it doesn't matter so much. I've been there. I've had my day, been a star. But these people. They just --"

He was overcome. I reached out to give him a reassuring squeeze on the shoulder, but a balding man in a white coat appeared from nowhere, clutching a package of toilet paper.