How Bush is trying to save face in Iraq

The president is now taking credit for turning Sunni tribes against al-Qaida in Iraq. But two years ago he rejected a Sunni offer to negotiate an end to the violence. 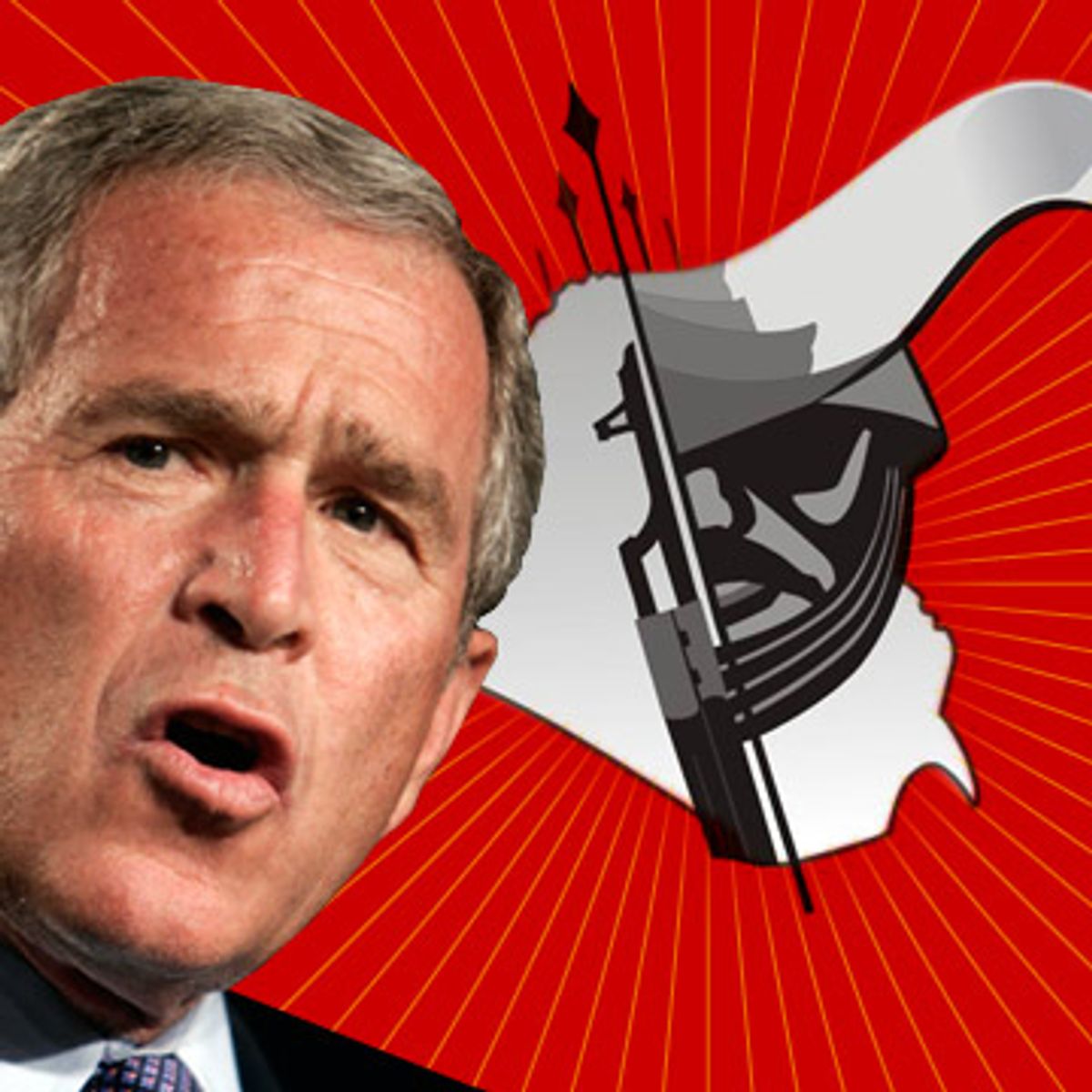 Two years ago the Sunni sheiks leading the insurgency in Iraq's Anbar province approached the United States, offering to end the violence in exchange for a timetable establishing that U.S. forces would withdraw from the country, a senior official at the highest level of the British government told me. Without some sort of negotiated deal that the Sunni leaders could brandish, they explained, they would not have the essential political justification for quelling the conflict. The British believed that the Sunni offer was being made in good faith and urged that it be accepted. But according to the senior British source, President Bush rejected it out of hand, still certain that he could achieve a military victory. He saw any agreement with the Sunnis as tantamount to defeat, the British official said. And yet, even as the Sunnis were rebuffed, Bush continued to invest trust in the Shiite-dominated Iraqi government to forge a political conciliation.

Now, Thursday night, in a nationally televised address from the Oval Office, President Bush will announce the withdrawal of 30,000 troops from Iraq by July 2008, leaving the U.S. force at the level it was before the "surge," through the presidential election year. He will claim that he is able to withdraw these troops because of the success of his plan, as proved by the result of the turning of Sunni tribes in Anbar province against al-Qaida in Iraq.

As Gen. David Petraeus did in his congressional testimony, Bush will point to events in Anbar as the key evidence of the surge's triumph. What he will not be discussing is how he discarded the earlier Sunni offer to negotiate and dismissed the advice of the British government as he pursued the chimera of "victory." He will also carefully neglect to observe that the Sunni action against al-Qaida in Iraq began independently before the surge, that it was never foreseen as part of the surge, that the Sunnis politically are more estranged than ever from the Shiite-run government of Nouri al-Maliki, or that the U.S. arming of the Sunnis may be a perverse preparation for the next phase of the Iraqi sectarian civil war in the likely absence of political power sharing. Nor will Bush explain the contradiction between his withdrawal of these 30,000 troops and his doomsday scenarios that withdrawing U.S. forces will presage genocide on the scale of Cambodia.

The appearance of Gen. Petraeus was staged to coincide with the sixth anniversary of the terrorist attacks of Sept. 11. Yet the emotional impact of the memorials has been overshadowed by the fresh casualty lists from Iraq. The day before this Sept. 11, two U.S. soldiers from the 82nd Airborne, who had joined five others in writing an Op-Ed article for the New York Times saying that the surge was not working, were killed in action. Yet Bush still sought to wring political gain out of the tragic memories of 9/11 as though his paradise lost -- the national unity after 9/11 -- could be regained.

Artillery barrages of TV commercials seeking to soften public opinion preceded Petraeus' report. A new front group, Freedom's Watch, founded at the instigation of the White House, funded by Bush's political financiers (including prominent members of the Scooter Libby Defense Fund) and directed by Dan Senor (former press secretary for the catastrophic Coalition Provisional Authority), launched a series of ads that were a pastiche of past Republican themes. Children in small-town America were depicted raising a flag, a scene plagiarized from Ronald Reagan's 1984 "Morning Again in America" commercial. Then fragments of Bush's 2004 campaign washed up like messages in bottles. Soldiers who had lost limbs in Iraq segued into pictures of the burning World Trade Center as words appeared on the screen: "They attacked us." A soldier said, "We're winning on the ground in Iraq. It's no time to quit." A bereaved woman whose uncle died as a fireman in the twin towers and whose husband was killed in Iraq spoke as words flashed on the screen: "More attacks." "Surrender is not an option." In another ad, a Marine in a wheelchair said, "To hear Congress talk about surrendering really makes me angry." After these poisons were injected into the atmosphere, Petraeus emerged from behind the curtain as the sober voice of reason.

Seated side by side, Petraeus and U.S. ambassador to Iraq Ryan Crocker presented less a united front than the antipodes of Bush's strategy. Both men were great stone faces, droning and dull, their lack of affect serving as masks for their onerous tasks. Instead of complementing each other, the men's testimonies made plain the surge's strategic incoherence. Deploying the classic euphemisms and misdirections of diplomacy, Crocker demolished, intentionally or not, whatever Petraeus sought to achieve with his dazzling display of dubious statistics. Then, in response to a single pointed question, Petraeus conceded the emptiness of his performance. He aimed friendly fire at himself.

"War is the extension of politics by other means," wrote the great military strategist Karl von Clausewitz. As a military operation the surge was intended to produce political power sharing and reconciliation. But Crocker disclosed that the military had not achieved these ends. Not only are the political benchmarks that the Iraqi government and the Bush administration established unmet, but they may never be realized. Crocker could attach no period of time to these goals. He could only suggest that there should be no benchmarks. "Some of the more promising political developments at the national level," Crocker said, "are neither measured in benchmarks nor visible to those far from Baghdad." In other words, the evidence is anecdotal, scattered and uncertain. Asked when political reconciliation might occur, he replied, "I could not put a timeline on it or a target date ... How long that is going to take and, frankly, even ultimately whether it will succeed, I can't predict." Crocker's version of Bush's policy was "Waiting for Godot."

Petraeus, meanwhile, meticulously unveiled an array of metrics attempting to demonstrate that the surge had succeeded in lowering the level of sectarian violence and civilian casualties. But his effort to gain empirical ground was greeted with widespread skepticism because his statistics were in dispute. The National Intelligence Estimate released on Aug. 23 stated: "The level of overall violence, including attacks on and casualties among civilians, remains high." The Government Accountability Office report of Sept. 4 (PDF) stated that the aim of "reducing the level of sectarian violence in Iraq and eliminating militia control of local security" was "not met," and that "there was no clear and reliable evidence that the level of sectarian violence was reduced and that militia control of local security was eliminated." GAO comptroller general David Walker testified before the Senate Foreign Relations Committee that "there are several different sources within the administration on violence, and those sources do not agree" and that "part of the problem that we had in reaching a conclusion about sectarian violence is there are multiple sources showing different levels of violence with different trends." And the Independent Commission on the Security Forces of Iraq, chaired by retired Gen. James L. Jones and created by Congress, reported: "The Iraqi Police Service is incapable today of providing security at a level sufficient to protect Iraqi neighborhoods from insurgents and sectarian violence."

Petraeus' presentation relied on the power of PowerPoint, but it was less than overwhelming. He had to plead that his statistics were valid even as he refused to reveal his full methodology. As it was, the strangeness of his categories -- a bullet to the back of the head entitled the victim to be registered as a civilian casualty, but a bullet to the front of the head did not, putting the victim into an insurgent casualty category -- suggested arbitrary classification, political willfulness and subjectivity.

In any case, Crocker's description of the Iraqi political void made Petraeus' claim of progress appear absurd. Petraeus was left dangling, flourishing numbers about tactics unrelated to the strategy. The ambassador consigned the general to a Clausewitzian twilight zone.

The highly credentialed and qualified Petraeus has a doctorate from Princeton and has written a recent report on the history of counterinsurgency. But he has apparently not studied the case of Colin Powell, whose sterling reputation and military expertise were appropriated by Bush for political purposes and who, after his utility was exhausted, was abandoned on the side of the road. The real front line where Petraeus found himself was more political than military.

If the surge has no connection to political goals in Iraq, it still has strategic political goals, just not in Iraq. The surge is the military means to Bush's political ends at home. "So now I'm an October–November man," Bush told his authorized biographer, Robert Draper, in "Dead Certain." "I'm playing for October–November." The rollout of the Petraeus report is the last major political offensive of the Bush administration. Petraeus' reputation is the token for buying precious time for an unpopular president. The Democratic Congress lacks sufficient majorities to alter Bush's policy. Petraeus' show is staged to keep Republicans, on the edge of sheer panic, from defecting en masse. Through Petraeus, Bush is locking in the congressional leaders and the Republican presidential candidates behind his policy. The general has been wound up as a mechanism for Bush's endgame -- perpetuating the president's Iraq policy until the conclusion of his term and assigning responsibility for "victory" or "defeat" to his successor. In his analogizing to the Vietnam War, Bush has begun to lay the basis for a stab-in-the-back, who-lost-Iraq debate, a poisonous legacy.

Sen. John Warner, the Virginia Republican who announced his retirement last week and who has called for disengaging from Iraq, asked Petraeus a simple and obvious question about Bush's policy, one that Bush likes to answer: "Do you feel that that [strategy] is making America safer?" Unexpectedly, Petraeus paused. "I believe this is indeed the best course of action to achieve our objectives in Iraq," he finally replied, carefully sidestepping a direct response. So Warner repeated his question: "Does the [Iraq war] make America safer?" Again Petraeus paused before answering, "I don't know, actually. I have not sat down and sorted it out in my own mind."

In the end, Petraeus could not convince even himself. Petraeus has lost his battle. Crocker has revealed the strategy as hollow. But the policy goes on.