Once a mighty war god, Bush has run out of tricks, troops and time. Will Americans finally rise up to stop his endless war? 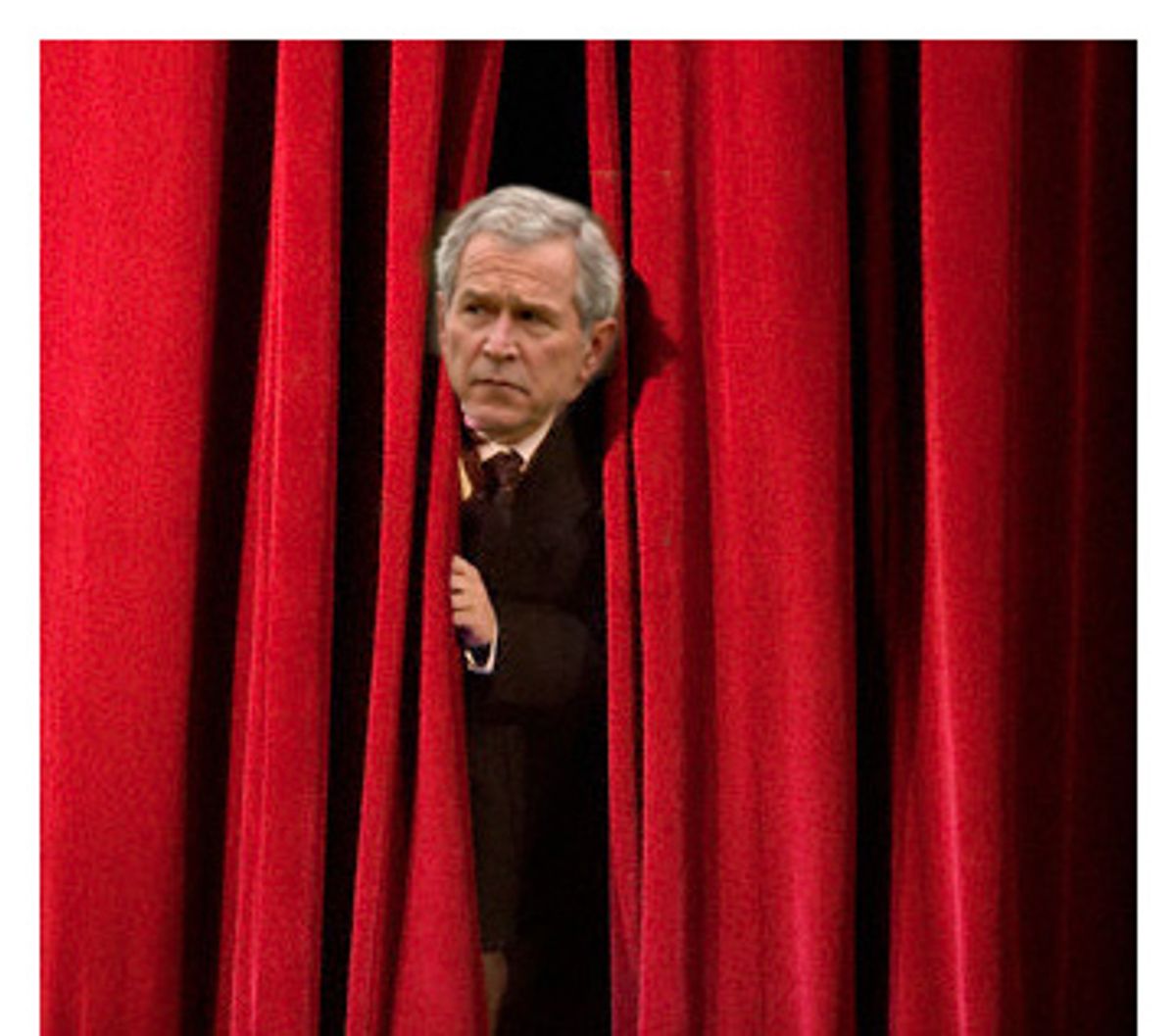 The Iraq war has moved into a weird purgatorial endgame. Almost no one believes in it anymore, but it keeps going. Americans keep dying, Iraq continues to fall apart, there is no end in sight, but nothing changes. Much of the country wants the war to end, but the political system is deadlocked. As George W. Bush's presidency winds down, there will be a crucial struggle between two opposed forces: inertia vs. outrage, resignation vs. engagement. At stake is not just what we do in Iraq but a deeper question: Do we care?

If history holds, the war will just keep rolling along as an anesthetized nation watches dumbly from the sidelines. Bush has succeeded in making an endless, pointless war seem normal. He just won another tactical victory, convincing wavering GOP politicians to sign off on his stay-the-course policy. A great lassitude seems to have descended over the country. The debate has gone on for too long, and the outcome is always the same. No one even wants to think about it anymore. The war is invisible.

But beneath the surface, something may have changed. Most Americans have been skeptical of Bush's war and everything he has said about it for a year or more. Still, they have entertained hope that the situation in Iraq would improve. Bush's "surge" was his last gambit: Everyone knew that there were no more troops to throw in. It had to work. Now that it is clear that it didn't, there is nothing else Bush can do.

This is an unprecedented situation. Bush always had another trick up his sleeve, another milestone to point to, another winning tactic to propose. But he has run out of tricks. The thing he dreaded most has come to pass: He is now completely at the mercy of events in Iraq.

Of course, Bush was always hostage to the harsh reality of Iraq. But he was able to counter that reality by invoking his master narrative about how Iraq was the front line of the war on terror, a battle of good vs. evil, a crucial battle on which the fate of the West depended. Even though Americans increasingly rejected that narrative, it had enough resonance to perform its function. At least Bush came across as consistent.

Now not ony has Bush's grand war story been discredited by reality, he himself has been forced to adjust it in ways that make him look both hypocritical and powerless. His aura as an aggressive winner has been destroyed. This fact has not sunk in yet, but it could lead to the final erosion of American support for the war.

Bush has justified the war by arguing that it's necessary to fight terrorism, and that we're winning. Gen. Petraeus bought more time for Bush by arguing that the surge had resulted in some minor tactical victories. But by declining to say whether the war in Iraq was making us safer, Petraeus did more damage to Bush's justifications for the war than all of the experts who have concluded that the war has made America less safe. Both Petraeus and Iraq ambassador Ryan Crocker admitted that we are not winning the real war in Iraq, the political one, and there are no realistic expectations of doing so.

Only dead-enders still believe that Bush's Iraq war either is winnable or constitutes "the front line of the war on terror." Most Americans see it as a terrible blunder that has thrown Americans into the middle of a civil war, and that is breeding far more terrorists than it is eliminating. Petraeus and Crocker's reports only confirmed these beliefs. Bush has no recourse. These are his people. And he doesn't have any more to trot out.

Trapped by reality, Bush can no longer use his time-tested rhetoric to rally America. Instead, he is forced to contradict his own grand ideological claims. His pathetic speech last week was a preview of what we are likely to see in the diminished last phase of his presidency. The grand rhetoric about "victory" was replaced by the weird CEO-like phrase "return on success," an expression so plastic it radiated "corporate bullshit spin" from every syllable. Worse, Bush had to acknowledge the destructive facts on the ground. He had to deal with the painful reality that unless he extends tours of duty, which would be political suicide, he has to start bringing troops home, no matter what the situation in Iraq is. This forced him to make the absurd claim that the surge's "success" in Iraq has made it possible to bring home 5,700 troops by Christmas. Disregarding the fact that these troops were slated to come home anyway, not even Bush's most ardent supporters could believe that there is any actual connection between the allegedly "improving" situation in Iraq and the redeployment of 5,700 troops.

By insisting that the stakes in the war are nothing less than the fate of Western civilization, yet refusing to impose a draft or ask Americans to make real sacrifices, Bush has painted himself into a corner. If the war in Iraq is really the vital front line of the war against terror that Bush claims it is, he should not be pulling troops out, but pouring more in -- even if it means reinstating the draft. For the first time, Bush's actions explicitly belie his words. Bush, once the great and powerful war god, now comes across as a desperate politician hiding behind a curtain, trying to score popularity points by bringing troops home while simultaneously warning of apocalypse if we lose the war. Bush's obvious hypocrisy and powerlessness, exacerbated by his lame-duck status, have caused him to lose his image of invincibility -- the only thing he ever had going for him.

In short, we're now in the endgame, and everyone knows it. Even the entropic force of war eventually runs out. The fact that even staunchly conservative GOP senators like Elizabeth Dole are edging away from Bush shows how much the ground has shifted.

Unless a miracle happens to stabilize Iraq in the next six months, the end of Bush's presidency will be slow-motion political death for him. Each bombing, each sectarian murder, each failure of the Iraqi factions to reach agreement will be another nail in his coffin. If the situation in Iraq worsens, which is, sadly, the most likely scenario, Bush cannot send more troops in, because there are none to send. But if he pulls them out, as he will be under enormous pressure to do, he will look like a weakling and a hypocrite. There is no way for him to get out of this self-created box -- except by ratcheting up tensions with Iran and Syria in the hopes of provoking an accidentally-on-purpose regional war that would serve as a do-over for his entire misguided Middle East adventure. Insane as that idea would be, he might grab at it to save himself.

Assuming that this nightmare doesn't materialize, the best-case scenario would be a political breakthrough, in which moderate GOP politicians, terrified of losing their seats in 2008, join with Democrats to force Bush to begin ending the war. The time has never been more propitious.

But America is being pulled in opposite directions. The failure of the war, and Bush's meltdown, could lead Americans to turn decisively against it. But it could also heighten the exhausted passivity, the resignation, and the sheer apathy that have marked America's response to the war.

The deepest, darkest fear of those opposed to the war is that Americans simply don't care enough to end it. The dead and the maimed are hidden from view. The war's economic impact goes unnoticed. The lack of a draft means that the rich and powerful have no personal stake in the war. Its effect on most Americans, in short, is zero. It is almost as if it is being fought by a mercenary army on behalf of some unknown entity. It may go down in history as the first war that never ended because people forgot its existence.

So America needs to wake up. Those opposed to the war, of whatever political persuasion, need to appropriate that old World War II chestnut, "Don't you know there's a war going on?" We need to think about what we could do with the $550 billion the war has cost so far. We need to remember that every day that this war goes on, jihadis rejoice, the chances of a devastating regional confrontation increase and our national security is jeopardized. Above all, we need to remember that real people are dying every day in this war -- Americans and Iraqis.

One of the many tragedies of Bush's response to 9/11 was that he squandered the sense of national unity that sprang up after the terror attacks. The country today is more bitterly divided than at any time since Vietnam. But we can regain that unity -- not through partisanship, not through Bush-hating, but through a renewed acknowledgment of our responsibility to each other. We need to remember that every American who falls in Iraq is someone's son or daughter. We need to commit ourselves to working with the Iraqis, whom we have so terribly wronged, and with the rest of the world to ensure that our departure will not cause Iraq's people to suffer even more. We need to remember that war is not normal, that it is the worst thing in the world, to be undertaken only in extreme need. And we need to remember that a nation that does not rise up when arrogant and foolish leaders sacrifice its less privileged members is in danger of becoming a nation in name only.

This is no longer about Bush. This is about remaking America.