Despite D.C. cynicism about his motives and his political persona, Edwards woos voters in New Hampshire and Iowa with authenticity. 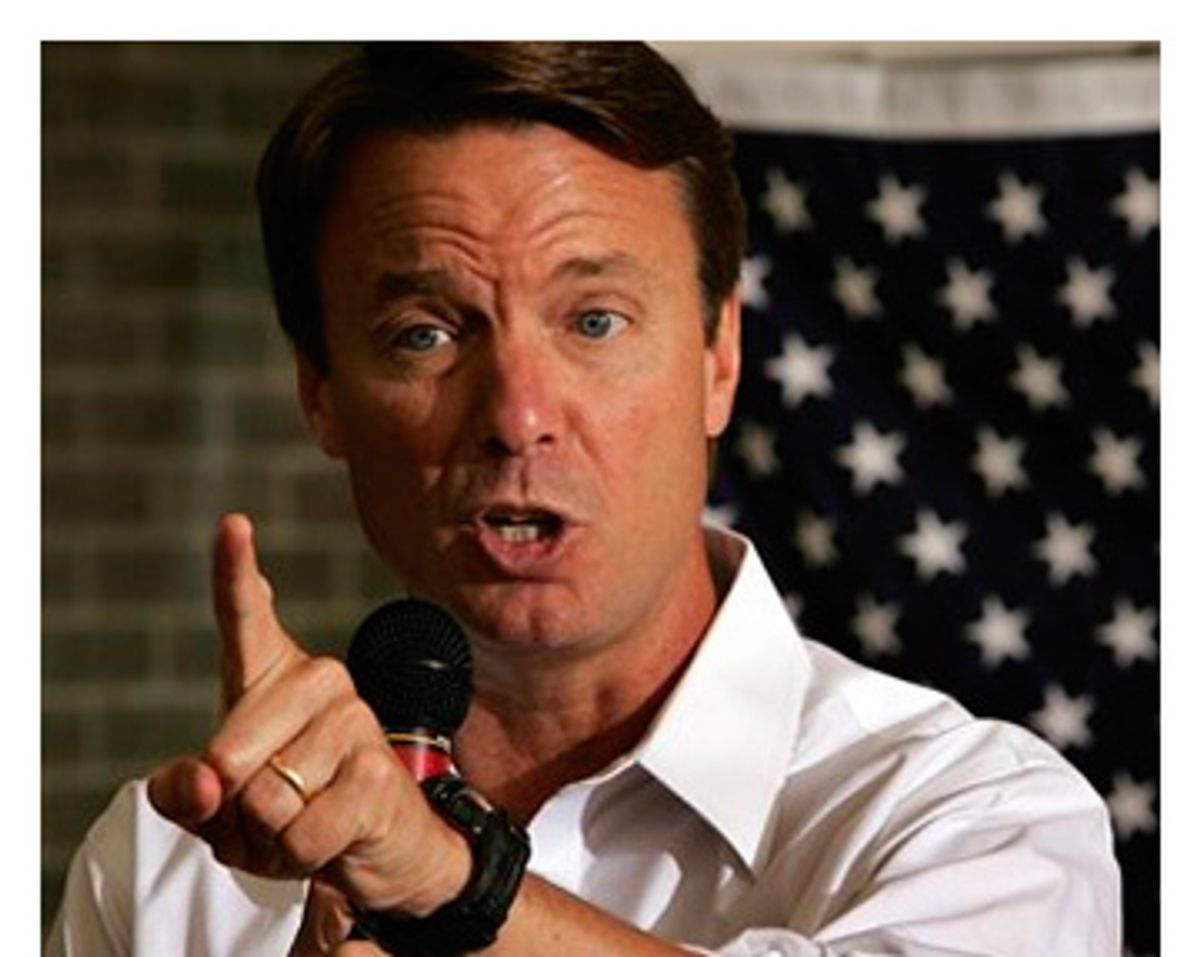 Here in the birthplace of the author of "Pollyanna" and the home of the "World's Longest Candy Counter," a middle-aged woman asked John Edwards the kind of cream-filled questions that would give any presidential candidate a sugar rush. What "personal characteristic," she asked, distinguishes you from your Democratic rivals?

In response to a similar question, Hillary Clinton probably would have stressed her experience and her commitment to "change," the poll-tested buzzword of this election. Barack Obama almost certainly would have waxed inspirational and talked about how cynics in Washington dismiss him as a "hope-monger." But for Edwards, it all came down to sincerity.

"You have to make a judgment," Edwards, dressed in jeans and an open-necked white shirt, told a Friday lunchtime crowd of 250 first-primary voters, who filled every square inch of the local community center. "We're not looking for the most cunning and most manipulative and most artful politician," Edwards said in what may have been an indirect jab at the Clintons. "You have to look us in the eye and listen to us and make a determination about what's inside us. Is this real?"

The answer -- which ended with Edwards pointing out that every day in any White House "the personal political interest of the president will come into conflict with the interests of America" -- won hearty applause. But Edwards himself has been publicly grappling with an authenticity problem ever since his mid-year campaign-spending reports highlighted the most politically costly haircut since Samson was shorn.

After the town meeting, Jill Brewer, a builder and part-time college student from nearby Franconia, said, "I liked him much more than I thought I would." In fact, Edwards is now running neck-and-neck with Hillary for her affections. "Seeing Edwards here in the same room distances him in my mind from the $400 haircut that I so disliked."

It was the end of a strange week for the Edwards campaign. He put together a strong debate performance against Clinton on Wednesday night (an evening when Obama was nearly invisible) and then muddled everything by suddenly announcing during a CNN interview Thursday afternoon that he planned to be the first Democrat to accept federal matching funds -- and the restrictions on overall campaign spending that come with it. With the third-quarter financial reports due on Monday, the Edwards campaign would be lagging far behind Clinton and Obama with an estimated $7 million raised.

Even as Edwards toured the North Country of New Hampshire, a state where he finished fourth in the 2004 primary, his entire campaign strategy is premised on being the Giant Killer who defeats Hillary and Barack in the Iowa caucuses. It remains a plausible scenario for Edwards. As a pollster for another campaign said, "Edwards is still at the top in Iowa. He has his base there and holds more than a quarter of the vote. And they're solid. The question that remains, though, is how does he expand that number?"

As someone who has been covering Edwards since his first foray into New Hampshire during the summer of 2002, I have long been stunned by the animus toward him that lurks just beneath the surface of elite opinion. In conversations with Washington political consultants, major Democratic donors, former Senate colleagues and big-time reporters, I have repeatedly heard the vague, but damning, refrain that Edwards is a shallow phony and his commitment to fighting poverty is mostly a political pose. This subterranean whispering campaign -- which predates his current uphill struggle against Clinton and Obama -- pits these insiders against Iowa Democrats and other rank-and-file Edwards supporters.

The $400 haircut was indeed a devastating political snafu, though the Edwards campaign has pointed out (to little avail) that the bulk of the cost went for the scissor artist's transportation costs. Yet, in fairness, there is a serious question about whether Edwards' rivals have equally extravagant moments away from the public eye. Both Clinton, who transformed herself from hair-bands to high gloss during her White House years, and the fashion-forward Obama also appear susceptible to expensive grooming habits.

Edwards is also ridiculed for the grotesquely large (28,000 square feet) mega-mansion that he built in Chapel Hill, N.C., after the 2004 election. While the aerial pictures suggest a Ritz-Carlton hotel or an executive conference center, it is unclear whether the underlying objection is size, cost (land is comparatively cheap in North Carolina) or non-elite taste. For example, would it have been permissible for Edwards to spend, say, $10 million on a 4,000-square-foot Park Avenue duplex that is not visible from the air? There is a sense that the anti-Edwards judgment would have been milder if he talked only of the political problems of the middle class.

During a Friday morning interview in his campaign van, on the way to Littleton against the colorful backdrop of early fall foliage, I asked Edwards if he felt victimized by a double standard. "Oh, I don't know," Edwards began, perhaps skittish about portraying himself as a media martyr. "If I was going through a presidential campaign for the first time, I might think that. But having been through a campaign, I think that it just comes with the territory. The media will turn on me for awhile, then they'll turn on Clinton for awhile, then they'll turn on Obama. That's just the way it works."

Complicating Edwards' efforts to emerge as a tribune for the poor and the disadvantaged was his ill-advised consulting arrangement with a New York hedge fund, the Fortress Investment Group. Edwards insists he belatedly learned over the last few months through newspaper stories that Fortress had two subsidiaries involved in the subprime mortgage market.

The Des Moines Register last week ran a front-page story detailing the 107 Iowa families whose homes were foreclosed by these Fortress subsidiaries. When the original subprime stories began to emerge, Edwards severed all financial relationships with the Fortress mortgage funds and set up a small trust fund to compensate New Orleans residents who had lost their homes because of Fortress.

What lessons, I asked, did Edwards learn from involvement with Fortress? "I did what a responsible person would do," he replied, unwilling to admit error, even in retrospect. "I asked the questions on the front end." Edwards said in his defense that what he consistently heard from friends in the financial community about Fortress was: "These are good people. They're trustworthy. They're high quality. They have integrity."

As a highly successful medical malpractice trial lawyer before his 1998 election to the Senate, Edwards labors under the odd political burden of being too glib and convincing in his public appearances. There is indeed a level of practiced perfection to some of Edwards' appeals to political juries in the early primary states. When he uses the phrase "opportunity and hope," his hand always seems to rise magically as if the candidate were holding the torch of the Statue of Liberty. When he expresses his horror that millions are dying in Africa because they cannot afford $4 a day for AIDS drugs, Edwards invariably holds out four fingers.

But during a period when the Democrats are desperately searching for the magic elixir (or narrative or frame) for winning back the White House, it is odd that Edwards is belittled for his powers of in-person persuasion. While Edwards has put together a string of strong debate performances, he remains a more compelling candidate in person than he is on TV.

Elizabeth Edwards, who was campaigning in California this weekend, suggested in a phone interview that the accusations of insincerity against her husband were politically motivated. "Trying to make it [look] hypocritical and political is obviously a tactic to undermine his connection with the voters at that gut-honesty-trust level," she said. "So they make the case that if a wealthy man is talking about poverty, it has to be a political position. I don't think they made the same arguments about Bobby Kennedy ... or Franklin Roosevelt." In truth, the patrician FDR was reviled not as a hypocrite, but as a "traitor to his class."

Ever since he arrived in the Senate in 1999 as a seemingly forever-young-and-well-coifed politician on the upward trajectory toward stardom, Edwards has fostered a what's-his-hurry resentment. "He irks political professionals," says a close political and personal friend of both John and Elizabeth. "It's not so much that he didn't pay his dues. It's probably more that he doesn't pay them due deference."

Edwards' decision to accept federal matching funds accentuates these tensions with the political chattering class. (Almost all major candidates in both parties have turned down the public-financing provisions of the campaign laws because they did not want to accept limits on their total spending). Although Edwards spun his decision as motivated solely by a commitment to eliminating special-interest money from politics, the reality (confirmed by Edwards insiders) is that his campaign desperately needed the roughly $10 million in matching funds that it will receive from the federal treasury.

While Edwards -- now limited to a $50 million spending cap for the primaries -- will be significantly outspent by Obama and Clinton, the true political pain from these legal restrictions would be felt only if the former senator is the de facto Democratic nominee. His Republican counterpart (unless it is John McCain, who is expected to take matching funds) would be able to raise an unlimited amount of money until the Republican convention. But Edwards would be hamstrung by this $50 million ceiling until he formally accepted the nomination in Denver in late August.

Asked about this problem in the interview, Edwards argued, "I think it's classic Washington think ... It ignores the extraordinary free media that exists for a Democratic nominee for president." Deputy Edwards campaign manager Jonathan Prince also pointed out that in 2004 John Kerry did not face any fundraising limits, but still was upended by the Swift boat ads, which were nominally sponsored by an independent group.

But if Edwards boasts a tactical advantage in this race, even over Hillary Clinton, it is that he has run for president before. As the 2004 vice-presidential nominee put it, "I went through the 2003-2004 campaign -- particularly the general election -- surrounded by more consultants and experts than you could shake a stick at. And the person whose judgment I trust is mine. And I trust Elizabeth's too."

With three months to go before the early contests in Iowa and New Hampshire, John Edwards remains the most politically plausible alternative to Clinton and Obama. And his fate depends on voters like Jill Brewer believing what they see before them in places like a community center in New Hampshire -- a candidate who is going by his gut and who insists that ultimately what is inside his heart is what matters.