The food industry processes the life out of our flakes and puffs, then sponsors studies boasting of their health benefits. Isn't it time to rebel against breakfast cereal supremacy? 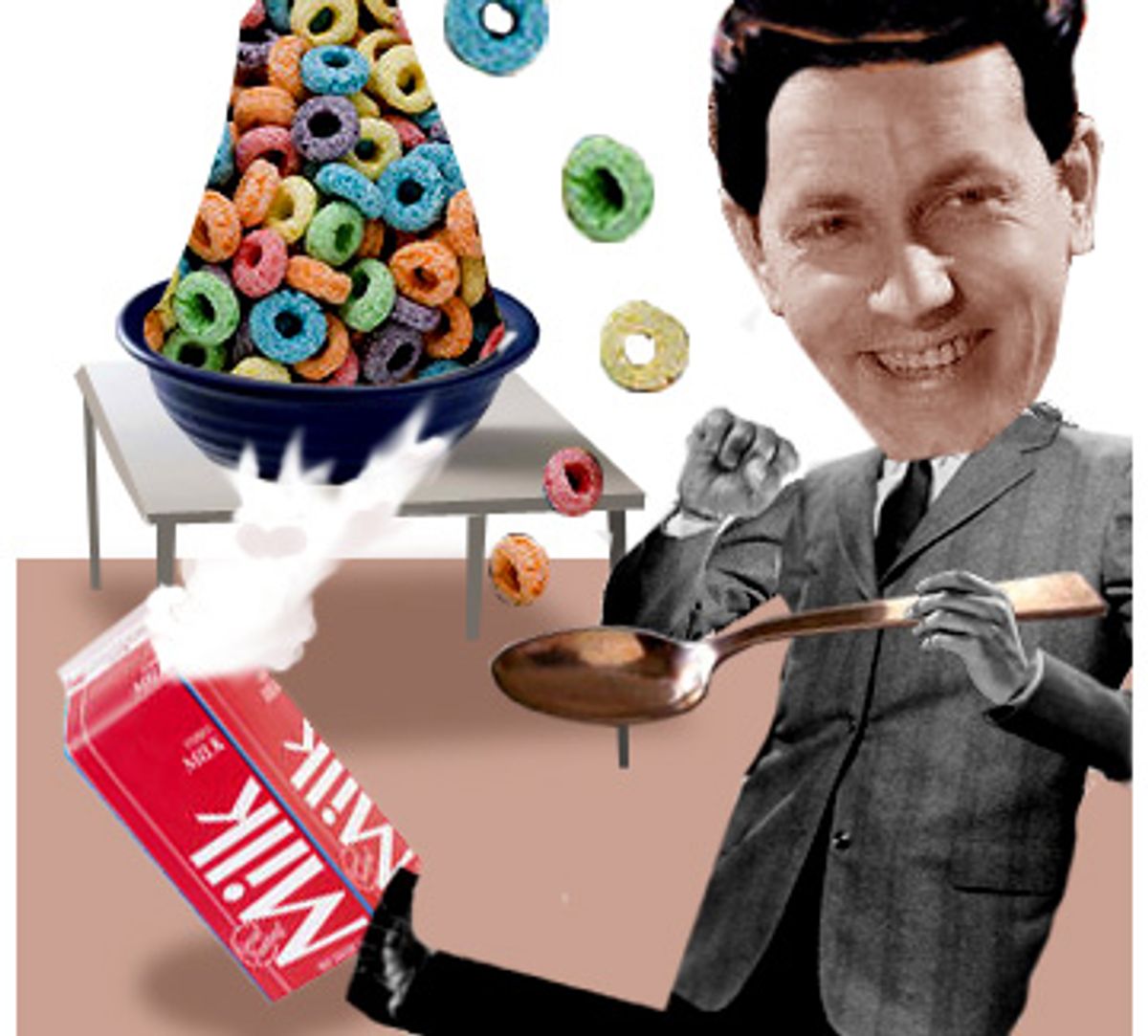 All great civilizations have their characteristic carb. The Egyptians gave us bread, which traveled via the Greeks and Romans to Europe, and reaches its pinnacle in the phallus-shaped loaf wielded by prancing Frenchmen everywhere. The Chinese popularized rice, which, grain by inscrutable grain, infiltrated cook pots half the world over. The Aztecs, for whom forehead-powered cargo transport was a technological triumph, went the handcrafted route with their corn tortillas. And we Americans? Pass the Cocoa Pebbles, dude!

Much to the chagrin of legions of frighteningly faddish foodies (at this very moment, drawing little 100-mile radius circles on maps and plotting Byzantine localer-than-thou provisioning strategies), the good ole USA has no culinary tradition stronger than that invented by Kraft, ConAgra and General Mills. The quaint regional cuisines -- gumbo here, ribs there, chicharrones over there -- so picturesquely chronicled by Gourmet magazine and the New York Times food section are, at this point, largely myth. For almost half a century, the American public has been happily chowing down out of boxes, cans, pouches and bags. And while we may savor every last bite of our Stouffer's Turkey Dinner or Annie's mac 'n' cheese, cold cereal is our lodestar, our old faithful, our most quintessential food.

To be sure, there are breakfast renegades. The unseemly few who start the day with a seven-minute downward-facing tree, a 5-mile uphill sprint and a slow-simmered vegan meal involving all four (now five?) major food groups. Or, in a seedy parallel universe, those, such as militant members of Pro-Ana Nation and drug-befuddled aging rock stars, who have opted out of the eating thing entirely. But for 31 percent of breakfast eaters -- as calculated by a 2005 ABC poll -- the morning ritual is to stumble blearily into the kitchen, fumble around in the cupboard, and get shaking with the flakes, loops or puffs. Which explains why ready-to-eat cereal, or RTEC as it is charmingly called in the trade, is the No. 3 supermarket top-seller, ringing up about $9 billion in annual sales, according to the 2002 Economic Census.

The cereal story starts with your great-great-great grandparents' clogged plumbing. Legend has it that upon rising they liked to gorge on such treats as fresh ham, rashers of bacon, smoked and salted fish, sides of beef, bread and butter, and coffee served by the pint. This led naturally to gastric distress, then known as dyspepsia, and its kissing cousin, constipation, a time-honored obsession of the long of tooth. (Who among us hasn't been accosted by a spritely senior relative with a no-detail-spared potty report?) Rescue appeared with the founders of Kellogg's, Quaker Oats and General Mills, who, by subjecting to newfangled industrial processes the grains (oats, wheat and barley) that had for millennia been cooked into nourishing paps and porridges, ushered in the age of Colon Blow.

Oh the fun they had! The very names of the machinery they invented bristle with little-boy id: grinders, crushers, breakers, pulverizers, choppers and, my personal favorite, extruders. Test-drive this cuddly recipe, home bakers: Take oat flour, corn starch, sugar, salt, vitamin E, trisodium phosphate (also used to prep wood for painting), calcium carbonate and that old food-industry standby "Natural Flavors" (not!). Mix with water to form a slurry (a sticky paste) and ram into a narrow chamber with a long, twisted screw, until it shoots out an O-shaped orifice at the other end. Slice into toroids (that's doughnut shapes to you), load into puffer and explode under 200 psi. Voilà! Cheerios!

Of course, there are a few things lost when you subject vegetable matter to the kind of brutality usually reserved for unlawful combatants. Niceties like vitamins, minerals and phytonutrients. And did I mention flavor? After all that processing, what you end up with is reconstituted plant cellulose, which explains why the taste of breakfast cereal so resembles that of another product made with reconstituted plant cellulose: cardboard. In fact, since manufacturing strips grains of 15 percent to 100 percent of most nutrients (source: the Nutrition Handbook for Food Processors), if it weren't for the chemicals used in bleaching, you might as well tear up a couple of 8 1/2-by-11-inch sheets, add milk and slurp that down for your first meal of the day.

To compensate for all the gone-missing elements of your "whole grains," cereal manufacturers simply add them back in at the end. (And you thought oats just happen to have 25 percent of every vitamin listed on the FDA's percent daily value label?) As at the gas pump, there are three levels of vitamin and mineral recovery. Enrichment replaces the nutrients lost in processing. Fortification adds more than were there in the first place. And then there's hypervitaminosis, on the theory that more is always better, even if it causes vomiting, fatigue and hair loss. In fact, breakfast cereal was one of the very first "phoods" -- an edible product that claims a medical benefit -- and it still dominates the category, comprising 30 percent of all nutraceuticals sold, according to Packaged Facts, a division of MarketResearch.com.

Which still doesn't address palatability, an issue that has plagued cereal entrepreneurs since Grandpa Kellogg first peddled Granula, rock-hard bran loaves that were shattered with a hammer and softened overnight in milk. For that we turn to our old friends, sugar and salt, and a new one, "inclusions," the industry term for all that extra junk like raisins, marshmallows and honey-coated granola clusters.

Railing against sugar is like ragging on Santa Claus. How mean-spirited can you get? But if you fritter away half the USDA's recommended daily allotment of 8 teaspoons on Barbara's Bakery Shredded Oats, you can't use it where it counts: on ice cream! Cookies! Cake! Chocolate! And salt -- well, a serving of Cheerios has 10 milligrams more sodium than a serving of Doritos. That toddler snarfing mini O's? A hypertension case waiting to happen. As for inclusions, they are gustatory three-card monte. Whether virtuous nuts or merry blue marshmallows, their job is to keep your mind off the flavorless flakes.

Which brings us to the question, "Is cereal even a good choice for breakfast?" The American Dietetic Association certainly seems to think so. On its Web site, it trumpets two 2005 studies published in its peer-reviewed journal that found cereal-eating teenage girls and breakfast-eating adults were more likely to be at a healthy weight -- perfectly positioning the cereal industry as the antidote to the health issue du jour, obesity. But wait a sec! Who funded those studies? General Mills and Kellogg's. Yep, since 1993 when the federal government lifted a 65-year-old ban on making health claims in food advertising, a whole new niche industry has arisen in food-company-sponsored research.

So if cereal isn't the elixir it's cracked up to be, why can't you riffle the lady mags at the supermarket without being admonished to start the day with a bowl? News flash: We -- the American people in the year 2007 -- are not highly respected by nutritionists. In their view, they are talking us down from a bag brimming with Egg McMuffins and hash browns or a jumbo Snickers bar and a 16-ounce Coke. Their advice is tempered by a venti dose of "lesser of two evils."

In the event that you'd like to be treated as if you weren't nutritionally challenged, here's what most dietitians concur is an optimal first meal, one designed to encourage six-piston brain function and provide maximal energy: Breakfast should contain about one-fifth to one-quarter of the day's calories (how many depends on your size and activity level), include plenty of protein (at least 5 grams), be high in fiber (at least 5 grams) and micronutrients, have some fat and have as little sugar (less than 3 grams) and salt (less than 140 milligrams) as possible. Looks like that rules out most of the products in Aisle 4, shoppers!

It's time to overthrow the breakfast cereal regime. For more than a century, we've suffered under its hegemony, shoveling down sugar-drenched buds, clusters and shreds, with little inherent nutritional value. So why not start the day however you damn please? Pop a One-A-Day, mix yourself a glass of Metamucil and have a Krispy Kreme -- at 9 grams of sugar, you'll be ingesting less than half the amount in a bowl of Post Raisin Bran. If you prefer to get your nutrients the old-fashioned way, i.e., by eating actual food, there's a world of possibility out there. You can even up the ante by shooting for the high-protein, high-fiber meal recommended by most dietitians. On the run? Grab a handful of dried fruit, seeds and nuts; a peanut butter sandwich on whole wheat bread or a slice of pizza. Got time to do a little thermal processing? There's that glory of packaging and sustenance, the egg. Or murder yourself a mammal and fry up some spuds. Go on. Enjoy yourself. You're free now.