Red, white and mercenary in Iraq

Under the cloak of freedom, the U.S. exempted Blackwater and other contractors from Iraqi law -- and destroyed its own democratic credibility. 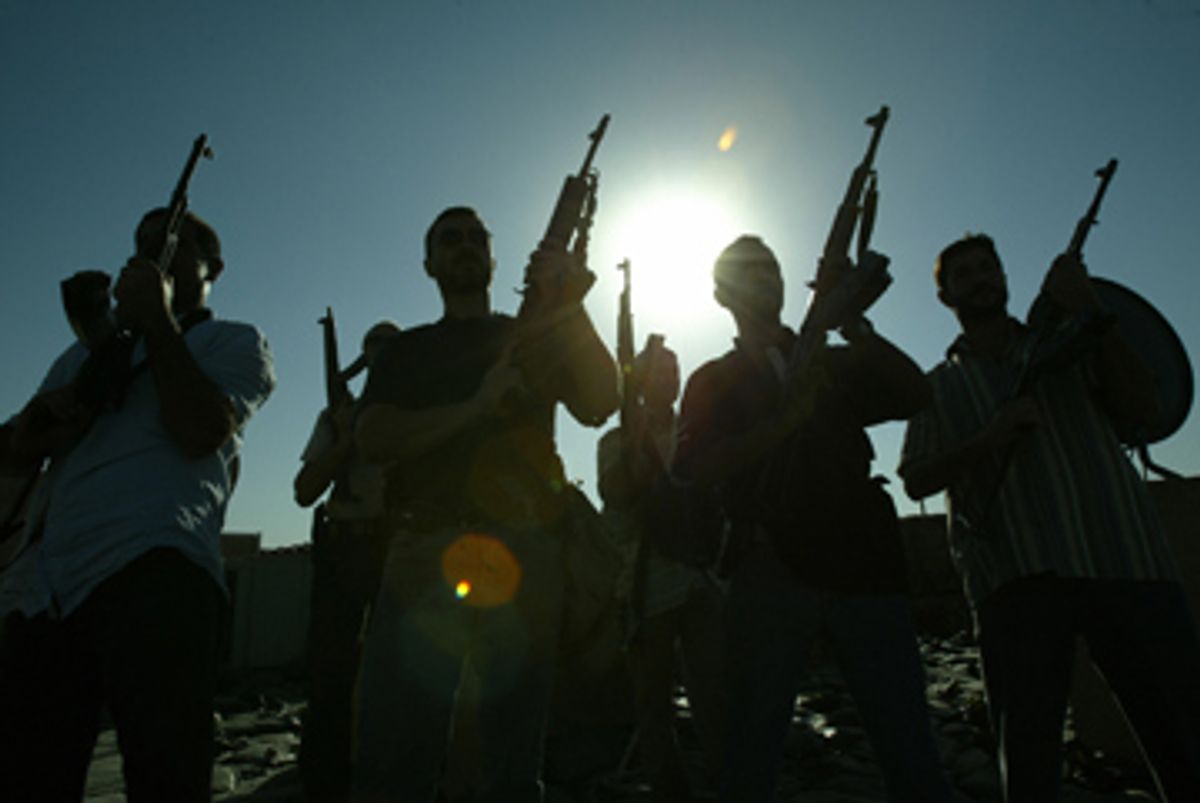 On June 27, 2004, the day before the United States was to grant sovereignty to a new Iraqi government and disband the Coalition Provisional Authority, L. Paul Bremer, the U.S. proconsul, issued a stunning new order. One of the final acts of the CPA, Order 17 declared that foreign contractors within Iraq, including private military firms, would not be subject to any Iraqi laws -- "all International Consultants shall be immune from Iraqi legal process," it read. "Congratulations to the new Iraq!" Bremer said moments before flying out. His memoir, "My Year in Iraq," neglects to mention Order 17.

The author of Order 17 was a CPA official named Lawrence Peter, who oversaw the Iraqi Ministry of Interior. As soon as the CPA was dissolved, the Private Security Company Association of Iraq hired Peter to act as its liaison and lobbyist there. The new Iraq included a revolving door.

Thus, in the process of granting Iraq sovereignty, the Bush administration eviscerated it. Order 17's grant of immunity to contractors guaranteed that more than half of the foreign presence on the ground -- for U.S.-paid contractors outnumber U.S. military personnel -- would operate for all intents and purposes beyond the law. Order 17 also undercut the authority of the U.S. military, frustrating command and control of the battlefield and upsetting sensitive counterinsurgency strategies. Order 17 meant that the monopoly of violence was fractured and outsourced to those not subject to the law. By unilateral fiat Order 17 uniquely created a red zone of impunity covering the entire country.

A radical break with U.S. policy, such an order had never been promulgated before. Order 17 should not be confused with a Status of Force Agreement negotiated with sovereign nations such as South Korea. Those agreements are subject to complex bargaining and mutual assurance. Nor are contractors subject to the Uniform Code of Military Justice because, after all, they are not in the U.S. military. Nor has the Military Extraterritorial Jurisdiction Act of 2000 been brought to bear on contractors in Iraq. That act applies only to those working for the Department of Defense and is rarely used, if at all. The contracts for private military firms have been funneled through the State Department, thereby exempting them from the MEJA. (The only case brought under the MEJA against a contractor in Iraq was for one who had raped a U.S. reservist in her trailer.)

Of the mercenary companies, Blackwater has earned a special status as one of the least controllable and most aggressive, ferrying through the battle space without coordination with U.S. forces. Time and again, Blackwater has triggered incidents undermining U.S. strategies and endangering military forces. In 2004, four Blackwater men brazenly drove through the insecure city of Fallujah, were quickly cornered by a mob, were killed and burned, and their charred bodies hung from a bridge. In the ensuing outcry, U.S. forces were ordered to encircle the city, attack, withdraw and attack again, eventually leveling it. In 2006, a drunken Blackwater mercenary murdered a bodyguard for the Iraqi vice president, and was spirited out of the country with U.S. Embassy complicity, paid off and never prosecuted. Under Order 17, no law applied.

According to a memorandum issued by Rep. Henry Waxman, chairman of the House Committee on Oversight and Government Reform, "There is no evidence in the documents that the Committee has reviewed that the State Department sought to restrain Blackwater's actions, raised concerns about the number of shooting incidents involving Blackwater or the company's high rate of shooting first, or detained Blackwater contractors for investigation." The committee released a report this week documenting 196 incidents of "escalation of force" involving Blackwater since 2005, including unreported killings. In more than 80 percent of these cases Blackwater initiated the violence.

On Tuesday, the chairman of Blackwater, 38-year-old Erik Prince, heir to an auto-parts fortune and an evangelical right-wing former Navy SEAL, appeared before the House Oversight Committee. He presented himself as though he were a general of U.S. forces, deserving deference from lowly civilians. Indeed, he declared that Blackwater's mercenaries were part of the "total force" in Iraq. If they were, of course, they would be subject to the Uniform Code of Military Justice. When pressed, Prince retreated into his fortress of privatization. "We're a private company, and there's a key word there -- private," he said.

Asked about the Blackwater gunman who killed the Iraqi vice president's bodyguard, he replied brusquely, "We can't incarcerate him. That's up to the Justice Department." But Richard J. Griffin, head of the State Department's Bureau of Diplomatic Security, testified, "The area of laws available for prosecution is very murky." Clarifying the law was hardly helped by the absence of any witness from the Justice Department. About Blackwater's bloody trail in Iraq, Prince simply dismissed any allegations of wrongdoing: "I believe we acted appropriately at all times." His contempt for his congressional interlocutors was barely concealed. "If there's two questions left," he said, "I'll take them and then let's be done."

The Democrats on the committee were careful to avoid appearing partisan, steering clear of mentioning Blackwater's deep Republican ties. It is not incidental that Prince is a major GOP donor, as is his sister, Betsy DeVos, whose husband is a member of the family that owns Amway. Raising the Republican connection was left to the maladroit Rep. Darrell Issa, R-Calif. Trying to tar the Democrats, Issa stumbled. "Labeling some company as Republican-oriented because of family members is inappropriate, and I would hope that we not do it again," Issa said. "Well, the only one who's done it is you," Waxman snapped back.

Then the foolish Issa trapped Prince into revealing his involvement in a partisan dirty trick. "I heard a rumor that your company or somebody in your company had given to the Green Party, do you know about that?" "Could have been," Prince said. In fact, in 2006, Prince and his wife donated $10,000 to a Green Party candidate for the U.S. Senate in Pennsylvania, a scam organized by Republicans in an attempt to divide the vote for Democrat Bob Casey and help reelect far-right Republican Rick Santorum. Issa's questioning had succeeded in casting Prince and Blackwater as beneficiaries of his Republican ties.

The use of mercenaries in Iraq is only partly the result of former Secretary of Defense Donald Rumsfeld's insistence on deploying a light military force there and compensating with private contractors. To be sure, using contractors has enabled the Bush administration to augment the American force without having its numbers included in government totals. The cost, moreover, has been hidden in supplemental budget requests. Congress has never voted specifically on the funds for contractors. But the urge to privatize is neither sheer happenstance nor mere convenience. The policy to outsource regular military functions to private contractors can be traced, as so much can be, to Dick Cheney. When Cheney was secretary of defense in the elder Bush administration, he initiated the program of privatization, which is partly what made him attractive as a CEO for Halliburton. While there was one contractor for every 50 military personnel in the Gulf War, however, the size of the army of contractors in Iraq exceeds that of the U.S. Army. Cheney's policy has been put on steroids under Bush.

Order 17, granting contractors legal immunity, is of a piece with the infamous memos written by David Addington, Cheney's former general counsel and current chief of staff, and John Yoo, former deputy assistant in the Justice Department's Office of Legal Counsel, which set out an unaccountable executive in the name of war, justified torture and unilaterally abrogated U.S. adherence to the Geneva Conventions.

Within Iraq, Order 17 is the legal analogue to these policies, extending impunity on an international scale. So long as Order 17 remains in place, the U.S. occupation will lack legitimacy in the eyes of the Iraqis. Until pressured by the House Committee on Oversight to conduct an investigation, the State Department was complicit with the mercenaries, undermining its own mandate to bring security to Iraq, as well as destroying any semblance of credibility for its stated goals of fostering civil society, democracy and the rule of law. Under cover of war the Bush administration defends lawlessness. In the name of fighting terrorism it protects outlaws.