Why the game is rigged, and why true democracy is only a secondary factor in the nation's rush to nominate the next president. 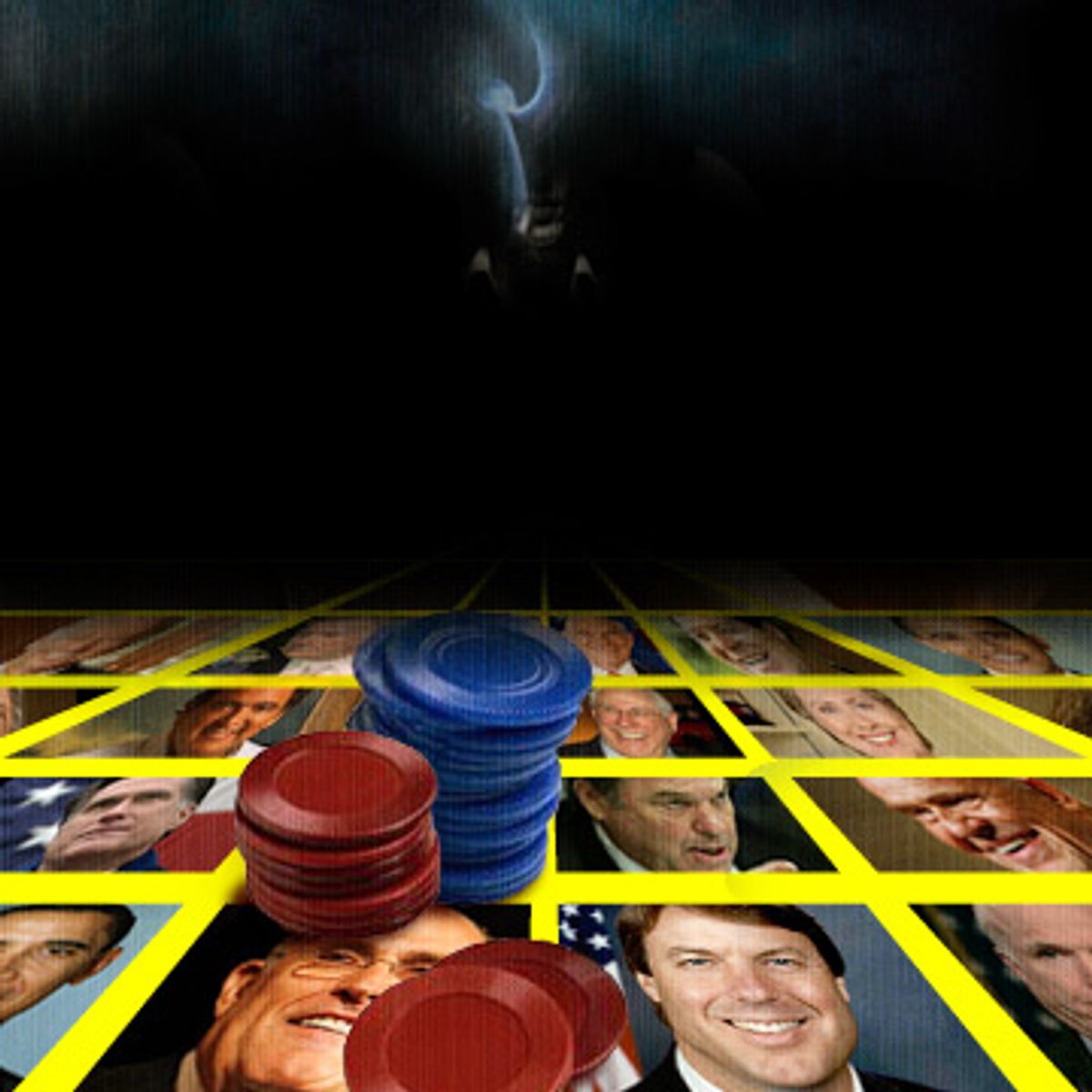 It's far worse than you think -- worse than hanging chads, faulty Diebold machines, and billionaires who bankroll last-minute attack ads. The American system for nominating a presidential candidate has about as much in common with actual democracy as Donald Duck has with a lake mallard. It's not just that this year's primaries have been further front-loaded, or that the early primary states aren't representative of the nation at large. There is only passing fairness. There is only the semblance of order. There is nothing like equal representation under the law.

The whole stinking process was designed by dead men in smoky parlors and refined by faceless bureaucrats in hotel conference rooms. It is a nasty brew born of those caldrons of self-interest known as political parties. At every stage, advantage is parceled out like so much magic potion. "The national interest is not considered in any form," says University of Virginia political scientist Larry Sabato. "Everything is left up to an ad hoc decision. It's chaotic."

And it gets worse. This election cycle, a top Democratic candidate shaking someone's hand in Miami before the end of January is breaking the rules, unless that someone is handing the candidate a check at the same time. To put it another way, Democrats' communicating with voters has been barred in Florida, but taking money from voters is OK. To put it a third way, the system is not only irrational but offensive to the nation's most basic values. "The only way that you can hear a candidate campaign is if you are willing to pay a campaign contribution," explains Steven Geller, Florida's exasperated state Senate Democratic leader. "It is astounding."

They don't teach all of this in school, because even a fourth-grader would get up from his desk and walk out of the classroom in protest. And where would that leave the nation, if all the 10-year-olds knew their political system was built on a lie, that empty hooey about all Americans being entitled to a single, equal vote? What would it mean if they knew every time President Bush and President Clinton and President Reagan had bragged about bringing democracy to the world, they were hiding the fact that pure representative democracy has never come to the United States?

At root, the problem is that primaries are considered by law and tradition to be the internal affairs of political parties. For the most part, the people who designed this calamity have never been elected to anything. They are operatives, organizers, functionaries, a smart set of soldiers who move like marionettes. They lead state parties and sit on committees with names like "Rules and Bylaws." You have never seen their names in the newspaper, because reporters rarely attend the meetings. And there are dozens of them, so you can't blame any single person.

The system they produce is justified in the press, partly because reporters enjoy its results. We like traveling to the early voting states, Iowa, New Hampshire and South Carolina, where candidates have to shake a lot of hands. Voters in these states are unrepresentative of the nation as a whole, but they tend to take presidential politics more seriously. They go to candidate town halls in large numbers and ask smart questions, allowing poorly funded candidates to compete with wealthy candidates on a more level playing field.

By most estimates, about 190,000 people will participate in the Iowa caucuses, with another 1.2 million or so marking ballots in New Hampshire and South Carolina. That's about 1.4 million people in a nation of 301 million, or one-half of 1 percent.

When these early states start voting in January, the rest of the nation will begin to pay attention. If tradition holds, the candidates who win the early contests will have a huge advantage. With some luck, both parties will unite behind a single consensus nominee within a month, all but making the ballots in the later states irrelevant. Each party's leadership prays for this to happen, because if it does not, if for some reason the Democratic or Republican grass roots remains split on a preference after February, then the American people will be forced to see how ugly the whole game really is.

FACT: When you vote in a presidential primary or caucus, you are usually not voting for a specific candidate, but for another person, called a delegate, who you hope will later support your candidate at the Republican and Democratic National Conventions. You can only hope, because many states do not bind delegates to follow voter intent, especially in the case of a contested convention. If no single candidate gets a majority of the delegates on the first vote, then the horse-trading can begin. After the second ballot, most delegates are free to nominate Jared, that guy from the Subway commercials, if they so choose. The last contested convention occurred in 1984, when Democratic candidates Gary Hart and Jesse Jackson initially refused to yield to Walter Mondale.

FACT: The national parties do not apportion delegates to states simply on the basis of either general or partisan population. (The Democratic rules are explained here, the Republican rules here.) For example, Tennessee has about the same number of residents as Washington state. But Tennessee will get 55 delegates at the Republican National Convention, while Washington is stuck with 40. The math involved in deciding delegate distribution is extraordinarily complex, involving the Electoral College, the strength of the local state party and other factors. Part of the formula used by Democrats reads like this: AF = ½ × ( ( SDV ÷ TDV ) + ( SEV ÷ 538 ) ). The bottom line is that no one will ever be able to say that any two delegates are created equal.

FACT: Not all votes will count. The Republican Party plans to punish every state that votes before Feb. 5 by denying half of that state's delegates access to the floor of the Republican Convention next year. At the same time, the Democratic Party is planning to punish the vast majority of its January voters, perhaps more than 2 million, by removing all the delegates from Florida and Michigan. Both parties are likely to reinstate the delegates later in the summer, but in the case of a contested convention, no one should hold their breath.

FACT: Political power brokers in New Hampshire, Iowa, South Carolina and Nevada have forced the Democratic candidates to pledge not to campaign in Michigan and Florida before the end of February, which means the citizens of those states will have to vote without ever seeing or hearing directly from their candidates. This is justified because Michigan and Florida disobeyed national party orders in order to hold their primaries in January. These states also have more voters than the four other states combined, threatening to upend the traditional hand-shaking privileges in the diners of Des Moines and Manchester. In the meantime, Democrats in two of the nation's largest states will never get to meet their leaders -- unless, as mentioned before, they throw a fundraiser.

About a week ago, Barack Obama traveled to Florida for a fundraiser at the home of Tom Scarritt, a Tampa trial lawyer. Afterward, he walked across the street and answered a half-dozen questions from reporters, a sin that prompted an immediate denial from the campaign. "It wasn't a news conference," claimed Robert Gibbs, Obama's communications director. This is what it has come to: Presidential campaigns trying to deny that their candidates spoke in public. Even Obama cowered. "I was just doing you guys a favor," he told the Tampa Tribune, after a reporter in the street pointed out that he was breaking the rules by speaking outdoors, where the public might hear. "We won't do it again."

This travesty is unlikely to be fixed anytime soon. Congress shows no interest in entering the mix, and the Supreme Court, for the most part, has upheld the rights of parties to set their own rules. Florida Democrats are planning to file a lawsuit protesting their treatment, though legal experts say there is little chance of success. "It all goes back to the fact that our founding fathers did not believe in mass democracy, and they did not support the idea of political parties," says the University of Virginia's Sabato, who proposes changing the Constitution to fix the problem in his new book, "A More Perfect Constitution."

Others point out that the current outrages are far less severe than the smoke-filled rooms of old, which nominated candidates like Warren G. Harding. Only 37 percent of delegates were selected through primaries in 1912, compared with 79 percent in 1996. As recently as 1968, Hubert Humphrey won the Democratic nomination without having run in any of the party's primary elections. But past failures do not excuse the current ones. Either the nation's political parties believe in the ideals of the nation, or they do not. They should be forced to decide.