My letter to the most important man in American politics

In which I implore Bill Gardner to save the New Hampshire primary. 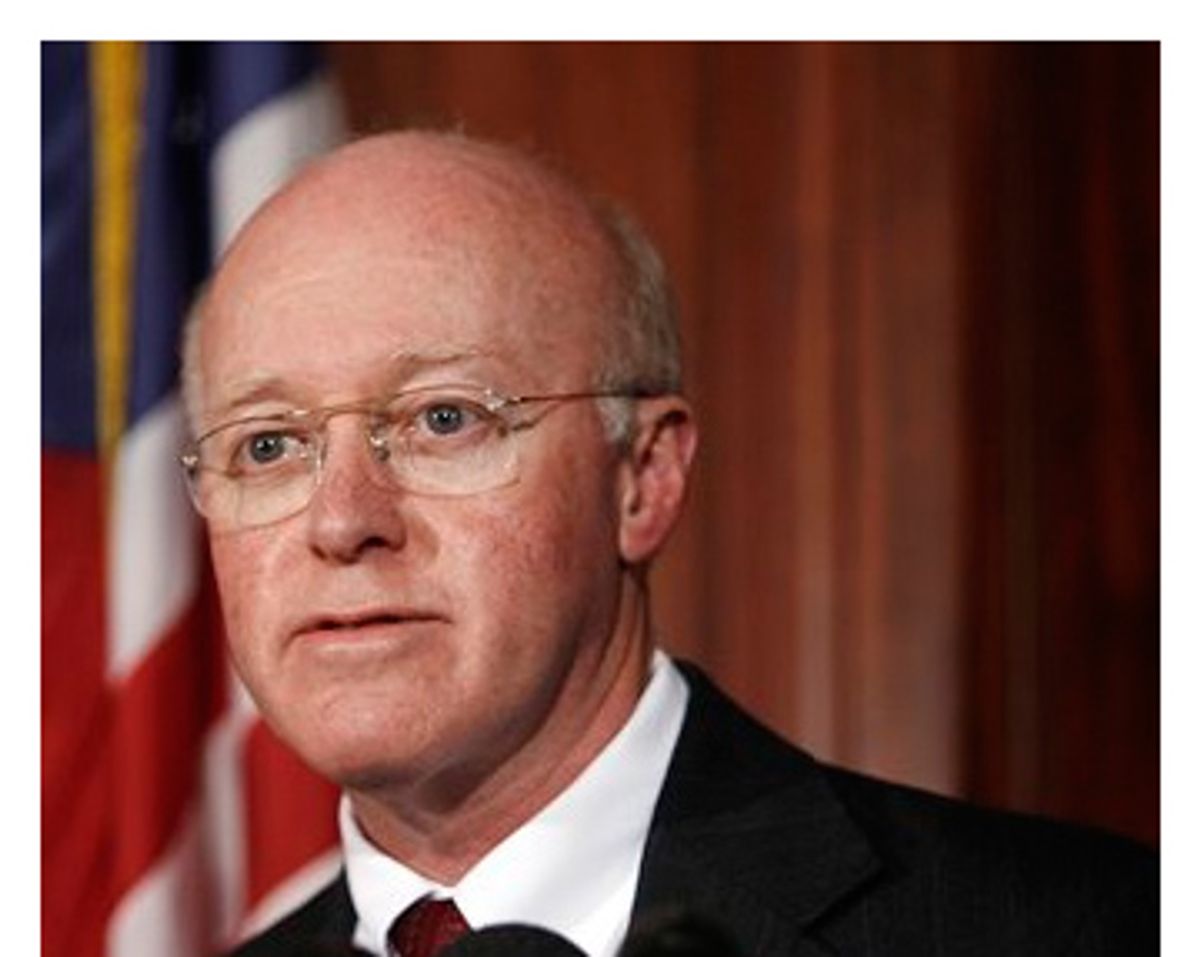 Bill Gardner, the doggedly nonpartisan New Hampshire secretary of state, is the keeper of the flame of the first-in-the-nation primary, a modern-day Horatio at the Bridge holding off the uninformed hordes who fail to appreciate this small New England state's unique status in the political firmament. Unlike anyone else in the galaxy, Gardner boasts the superpower to schedule his state's presidential primary by personal fiat without consulting the governor, the state Legislature or either political party. Gardner is guided by a single North Star -- the wording of the New Hampshire statute that decrees that the secretary of state shall set a day for the primary "which is 7 days or more preceding the date on which any other state shall hold a similar election."

Never before in his three-decade career as the Man Who Sets the Date has Gardner faced a more daunting challenge than in the 2008 presidential season. The primaries are starting earlier than ever, with roughly half the nation slated to vote in a single day, Feb. 5. Despite the opposition of both national parties, particularly the Democrats, Michigan has horned in on the early action by slating its outlaw primary for Jan. 15. Trapped by the inexorable 31-days-hath-January calendar math, Gardner does not have much room to maneuver.

His decision, likely to be announced with a puff of white smoke early next month, affects more than the holiday plans of political reporters and the first-quarter earnings of the New Hampshire hotel-motel industry. Seemingly small matters -- such as the interval of time between the opening-gun Iowa caucuses and the New Hampshire primary -- can play an oversize role in choosing the presidential nominees.

Also, the entire tradition of starting the presidential campaigns in small states like Iowa and New Hampshire is already in jeopardy. A maladroit move by Gardner could permanently destroy the Norman Rockwell tradition of the candidates' being grilled by crusty New Englanders in high-school gyms and (still occasionally) living rooms. In the future, candidates may well run for president from TV studios and campaign jets, never venturing more than five miles from a major airport and using voters as little more than visual props for see-the-leader-amid-the-people commercials.

These daunting pressures of the present and dire visions of the future prompt the following open letter to the Most Important Public Official in Politics:

Subject: The Fateful Date (What Else?)

As a reporter who covered his first New Hampshire primary in 1980 and who reveres its democratic values and traditions, I feel compelled to offer some scheduling advice from the sidelines.

You remain as inscrutable as Alan Greenspan before his memoirs, but I note that the Washington Post has divined from a recent interview that you are tempted to move the primary to December. (After our 90-minute phone conversation in July, about all I divined was that the New Hampshire primary would indeed take place sometime in 2007 or 2008.)

A word of warning: If you try to preserve the primacy of the primary by primly picking a Tuesday in December, you risk New Hampshire's being ridiculed by the late-night comics for voting on 2008 presidential candidates in 2007. As you know all too well, New Hampshire's first-in-the-nation status is hanging by a thread. And holding the primary while the Christmas decorations are still up in Concord will seem to most Americans as absurd as beginning leaf-peeping season in February.

New Hampshire did not cause the front-loading of the system (your primary has been at the head of the class since 1920), but your state will be blamed for it. And in 2012, New Hampshire and Iowa would probably be shoved offstage to be replaced by a national primary, open only to candidates with household names who can raise $150 million before a single vote is cast.

Because of your concerned public comments about Michigan voting on Jan. 15, it is widely assumed that you will opt for Tuesday, Jan. 8. But that seemingly safe choice would mean that New Hampshire would be reduced to a way station between the Iowa caucuses and the Michigan (only Republicans will be competing) and South Carolina primaries. In short, Jan. 8 is a date that would squeeze New Hampshire to near irrelevance.

At the moment, the most likely choices for the evening Iowa caucuses are Thursday, Jan. 3 (currently favored by the state Republican Party) or Saturday, Jan. 5. Since Iowans have to caucus in person, male turnout may be depressed by conflicts with football, whether it is the Orange Bowl (Jan. 3) or the NFL and AFL wild-card playoffs (Jan. 5). Friday night, Jan. 4, is out of the question because of the religion built around high-school basketball games, though the Jewish Sabbath provides a far more public-spirited excuse.

Think what this accelerated caucus schedule would do to diminish the New Hampshire primary, which in recent years has been eight days after Iowa. The candidates will live nearly full-time in Iowa from the week before Christmas until the caucuses. They will watch the ball come down on New Year's Eve in Dubuque (Iowa) not Derry (New Hampshire). If the caucuses are Jan. 5, the candidates will arrive in New Hampshire just in time to spend Sunday morning, Jan. 6, making the rounds of the TV talk shows. They will then embark on a whirlwind 36-hour tour of the state, which would be a parody of New Hampshire-style personal campaigning. After 88 years of tradition, New Hampshire would become a drive-by state.

Thursday, Jan. 3, for Iowa would give New Hampshire only slightly more breathing room. Democratic media consultant Anita Dunn, who braved the Iowa-New Hampshire gantlet with the ill-fated 2000 Bill Bradley campaign, predicts that Jan. 4 would be dedicated to absorbing the results of the caucuses. Then Saturday, Jan. 5, would be dominated by the first post-Iowa snap polls. A network or two would probably sponsor debates in both parties on Sunday, Jan. 6. Then would come the candidates' 36-hour no-questions-please-we're-in-a-hurry dash to the primary. As Dunn put it, "By the time the Iowa analysis is over, New Hampshire will have happened."

While we are in uncharted territory with the tightly sandwiched 2008 campaign schedule, the simple rule of thumb is that the Iowa caucus results tend to dissipate after five or six days. The internal tracking polls for Bradley in 2000 and Howard Dean in 2004 -- two candidates who endured epic pratfalls in Iowa -- charted a rebound as the New Hampshire primary neared. In short, the smaller the window between Iowa and New Hampshire -- especially if it is just three days -- the greater the likelihood that New Hampshire would simply ratify the results of the caucuses.

This schedule would also reward Michigan for breaking the rules of both parties by moving at the last minute to mid-January. (The logic for making major industrial states wait to hold their primaries until later in the cycle is to give underdogs a chance to break through with low-cost campaigning in Iowa or New Hampshire.) After spending as little time as possible in New Hampshire, the surviving GOP candidates would lavish a full week in Michigan, tromping through Traverse City and bowling in Benton Harbor. Meanwhile, the Democrats (who have pledged to boycott Michigan) would give the South Carolina primary and the Nevada caucuses (both of which may be held on Saturday, Jan. 19) the full attention that New Hampshire once took as its birthright.

There is an obvious solution to save the New Hampshire primary, though it would take a little maneuvering on your part, Mr. Gardner. Hold the New Hampshire primary on Saturday, Jan. 12. That would restore the traditional week-or-so separation between Iowa and New Hampshire. The Democratic candidates would spend that entire week in New Hampshire, while the Republicans would be skittish about campaigning in Michigan before Jan. 13 for fear of fatally antagonizing Granite State voters.

Yes, I know that the New Hampshire law says that the primary has to be at least "7 days" before "a similar election." But it is the secretary of state who interprets what the phrase a "similar election" means. Many in New Hampshire, including state Democratic chairman Ray Buckley, have argued that the Michigan primary is not a similar event, since all the leading Democrats, aside from Hillary Clinton, have formally removed their names from the ballot. In your comments this week to the Manchester Union Leader, Mr. Gardner, you indicated that you would not accept this easy exit route from your current scheduling dilemma.

In an age where it seems like everyone is cutting corners, it is both praiseworthy and a tad foolhardy that the secretary of state of New Hampshire would not take advantage of such a legal loophole to uphold the primary.

So why not do things directly? Ask the governor and the legislative leaders to convene a special session to eliminate the "7-day" requirement from the primary law. As influential Democratic state Sen. Lou D'Allesandro said, "That's not a major problem. If Bill Gardner asked for it, yes, it could happen." Since New Hampshire is such a small state, I am told that it would not take more than a week to make the arrangement for a special session of the legislature.

Outsiders may think it is weird that a national reporter would devote so much energy to trying to urge you to move the New Hampshire primary just four days from the likely Jan. 8 to the infinitely preferable Jan. 12. But in the hyper-drive video-game world of the 2008 primary calendar, 96 more hours is a political lifetime. Time enough to uphold the relevance of New Hampshire's proud political traditions. For to update Daniel Webster, "It is a small primary, and yet there are those who love it."