On his diner tour, the Republican front-runner would rather talk about the Red Sox than the issues. 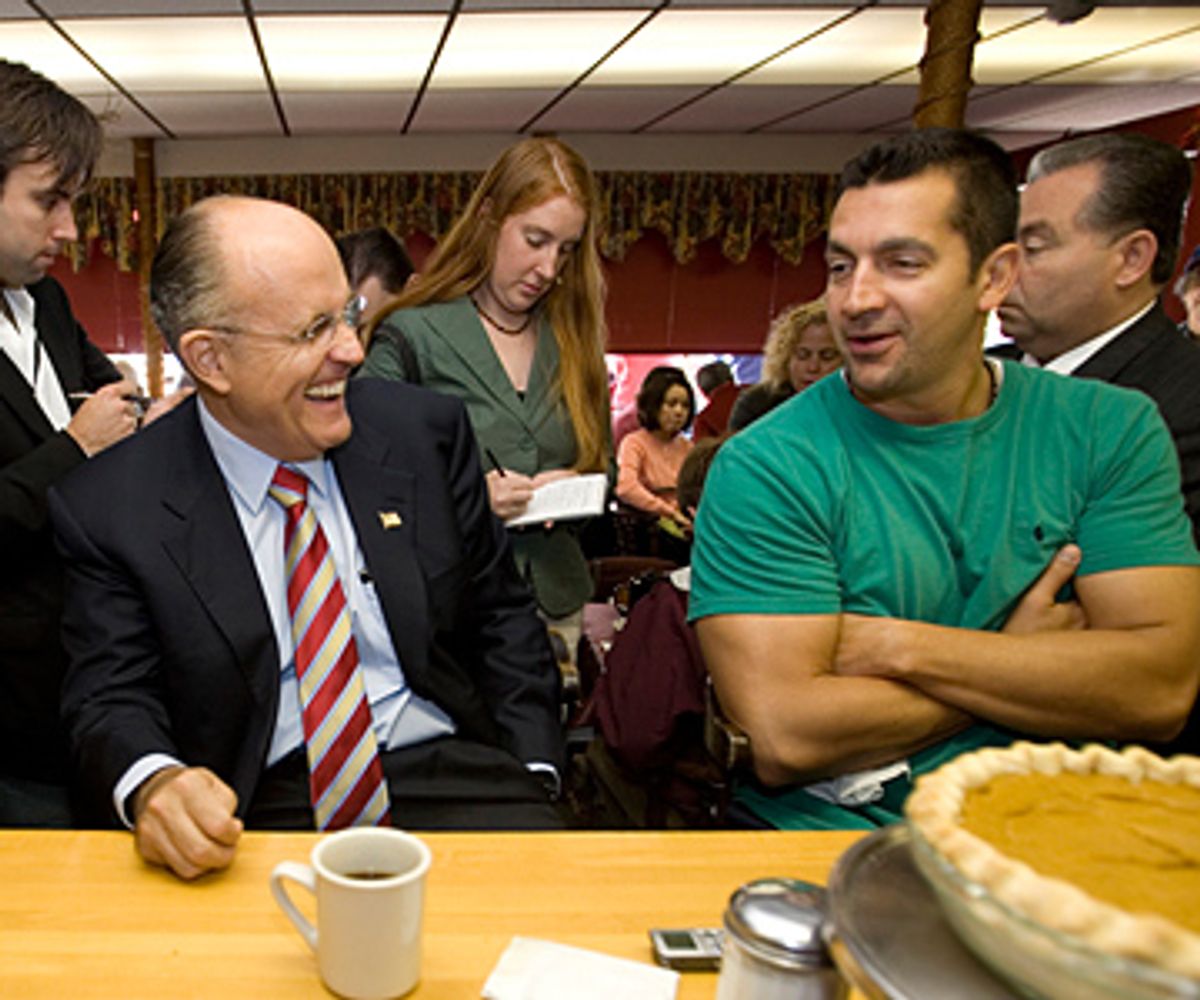 The customers at Young's Restaurant are mostly bleary-eyed college kids, girls in sweats and ponytails, guys in T-shirts and baseball caps. They all look hung over, hunched before egg and coffee cures at 2 o'clock on a Sunday afternoon. Giuliani blows through them like a tornado, the journalistic detritus swirling around him -- cameras, a boom mic, notepads, strangers in blazers. The students blush, the candidate smiles and he is gone. He never bothers to introduce himself, or ask for their vote. He doesn't have to. He is America's Mayor. Have you seen the polls?

"We like the position we're in for not having spent any money yet," Giuliani tells a gaggle of press just a couple hours earlier at a different diner, the Golden Egg in Portsmouth. In most polls, he ranks second in New Hampshire, just a few points behind Mitt Romney, the former governor of neighboring Massachusetts who has spent millions of dollars on television ads. "Of course we intend to campaign very, very strongly here."

For the moment, that means sending out direct mail, the occasional town hall meeting, a new radio spot, and an endless procession of diners, where Giuliani bucks convention by keeping the conversation focused on sports, not Iraq or taxes. Over the course of a single cup at the Golden Egg counter, Giuliani covers the disappointing start to the New York Giants season, the afternoon Patriots-Cowboys matchup, and a cellphone sold in South Korea that allows fans to watch sports live on the road. "You worried about the Red Sox?" the Yankee-fan candidate asks George Mendros, a sales rep visiting from Boston. "You shouldn't be. They are going to win."

At a time when Republican candidates are increasingly turning on each other with barbed attacks, the Giuliani campaign has taken another approach, attempting to soar above the field. At his own speed, he shakes hands, talks baseball and bashes Democrats for being weak on terror and big on new taxes. Since January, Romney has held 178 events in New Hampshire and Iowa, while John McCain has logged 99 events, according to a tally kept by the Washington Post. By contrast, Giuliani has held just 35 events in New Hampshire, and only seven in Iowa. And it may be working, though modern history teaches us that early polling in contested races is a lousy predictor of presidential nominees.

Giuliani's air of detachment has earned him the constant ridicule of his rivals, who all hope to steal a bit of his front-runner magic. For weeks, Romney has made almost a daily habit of attacking Giuliani, most recently for his past opposition to a line-item veto, a crown jewel for many pork-cutting conservatives. In Nevada on Friday, Romney leveled a long verbal assault on the former mayor, ending with the Howard Dean-like admonition, "I do speak for the Republican wing of the Republican Party." This prompted McCain, who had been sidelined by the fight, to drop his own bomb on Saturday in Manchester, attacking Romney. "I hope you know I'm not going to con you," McCain said, after explaining all the reasons that Romney could be considered a bad Republican. About six hours later, after news of McCain's broadside went out over the wire, the Fred Thompson campaign released a statement accusing Romney of running "to the left of Ted Kennedy" in his 1994 Senate race. For the somnolent Thompson campaign, which inexplicably did not hold a public event all weekend, this was the day's only evidence of a pulse.

But Giuliani would rather sign more autographs than get involved in any internal tit-for-tat with his Republican rivals. "Primaries are primaries," he said, when I asked him if all the negativity on the Republican side could hurt the party. "Look, everybody wants the nomination. You point out the things you think to be most important to you." He is far less hesitant about attacking Democrats, a tactic intended to show how well he might fare in the general election.

At a town hall meeting in Exeter Saturday afternoon, Giuliani devoted most of his time to explaining how little Democrats understand about how the economy works, or what it takes to run the government. "We need a president who can stand against what the Democrats have in store for us," Giuliani told the crowd of about 200 at the Exeter town hall. "Big government doesn't solve problems. Big government helps with emergencies." In the stump speech and the questions that followed, Giuliani was energetic, and often funny, comfortable in his own skin and his oversize suit. He tried to present himself as the most capable leader to run the country and win the general election. He promised incentives to spur the development of alternative energy sources, new efforts to seal the Southern border from illegal immigration, and lower federal taxes. "Yes, global warming is happening. Yes, human beings are contributing to it," Giuliani said, though he added that he did not see the problem as an emergency that needed to be addressed immediately.

But there remains a mystery to Giuliani's diner-drive-by strategy. Republican party insiders are still selling the New Yorker's stock short, noting that he has failed to win much traction in either Iowa or South Carolina, where social conservatives have disproportionate influence. Even the press corps has begun to wonder aloud whether so many diner stops, which produce little more than good pictures for the nightly news, will do Giuliani any good once voters settle down to vote.

"You spend more time at diner counters than any of your rivals. What's the strategy behind that?" a wire service reporter asked the former mayor, when he came outside the Golden Egg, the first of three diner visits Sunday.

"I like to eat," Giuliani dodged, yielding a round of laughter.

"Can you eat your way to the nomination?" the dogged reporter persisted.

"Well, maybe in New Hampshire I can eat my way through all the diners," Giuliani responded. "I don't know about the nomination."

The truth is no one knows. In the current primary system, there is a huge risk to treating early voting states superficially. The voters in Iowa and New Hampshire tend to demand lots of face time, not just to talk sports, but to ask substantive questions. By focusing on photo ops in coffee shops, Giuliani risks ending his season the way his beloved Yankees did. Despite some great stats, he might just be eliminated in the first round.