Rudy Giuliani and Hillary Clinton think a tough line on Tehran will sell politically. They could be right. 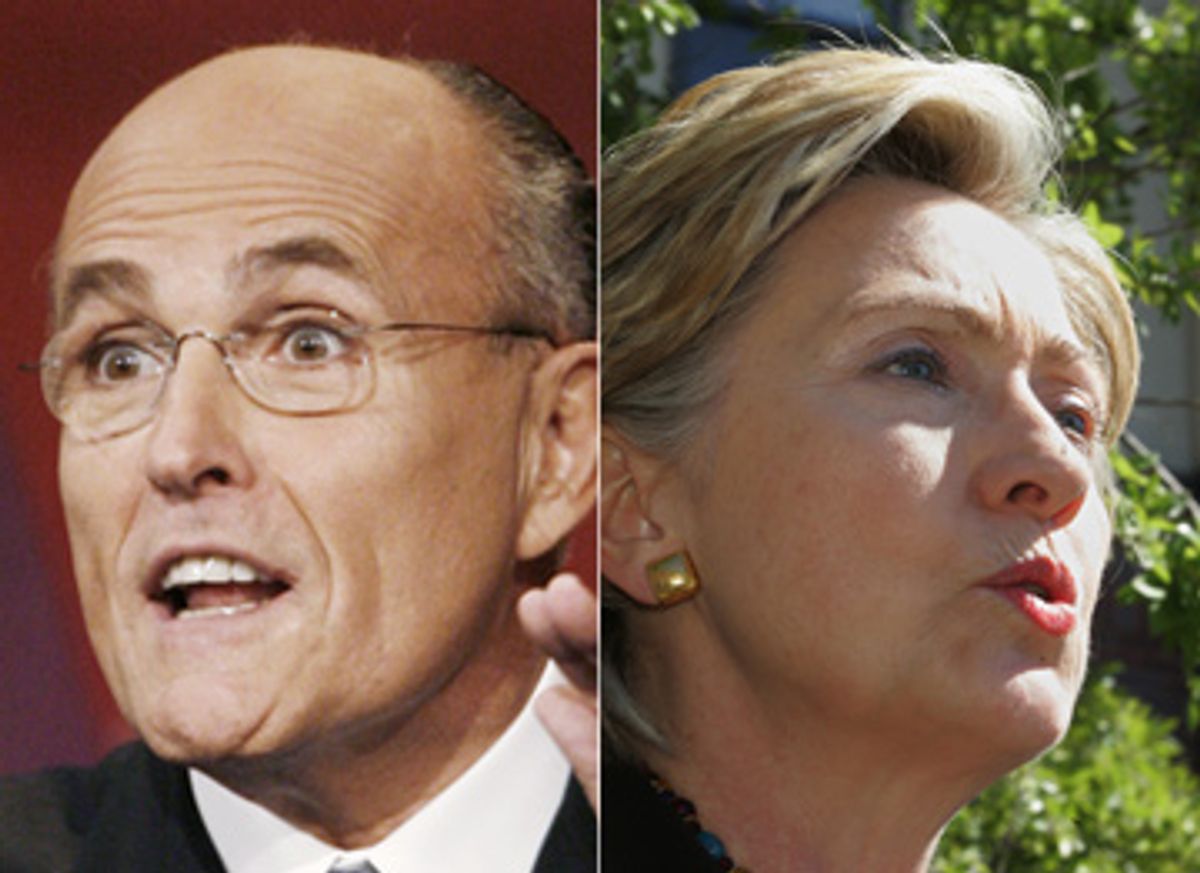 Future historians may conclude that the key issue in the 2008 presidential campaign was not Iraq, but whether the United States should go to war with Iran. Sparring over Iran dominated the Republican debate in Dearborn, Mich., last week, while a Senate resolution condemning Iran's Revolutionary Guards as terrorists divided the Democrats, some of whom (including Sen. Barack Obama and Speaker of the House Nancy Pelosi) feared that it might give Bush a pretext to launch another war. Unexpectedly, Tehran has emerged as a preoccupation of candidates -- as a litmus test for attitudes toward war and domestic security.

The Republicans are competing to see who can wax most bellicose. The two candidates with the greatest need to compensate for their socially liberally pasts, Mitt Romney and Rudy Giuliani, have been extra warlike. Giuliani in particular seems to be running for velociraptor-in-chief.

In an ABC interview on Sunday, Giuliani made fun of Romney for saying during the Dearborn debate that he would seek the advice of counsel before launching a war on Iran. Moderator Chris Matthews had asked, "If you were president of the United States, would you need to go to Congress to get authorization to take military action against Iran's nuclear facilities?" Romney had replied that the president "has to do what's in the best interest" of the country "to protect us against a potential threat." He said nothing about needing a congressional declaration of war; indeed, he was clearly suggesting that for him to strike Iran it would suffice to get a legal opinion that such an act did not require a formal declaration of war.

During his Sunday interview, Giuliani attempted to portray Romney's brazen end run around the Constitution as evidence of wimpiness. "That's one of those moments in a debate," he told ABC News, "where you say something and you go like this [wiping his mouth with the back of his hand] ... wish I can get that one back.

"Basically, right out of the box," Giuliani continued, "first thing, you're faced with imminent attack on the United States, I don't think you call in the lawyers first. I think maybe the generals, the ones you call in first, they're the ones you want to talk to."

But Matthews, of course, had not asked Romney what he would do were the U.S. attacked. His question concerned a sudden U.S. strike on Iran's nuclear energy facilities, and whether the president should seek congressional authorization for such an act of war.

During the debate itself, Romney also took heat for not mentioning the need for congressional authorization, although the rebuke came from a lonely voice out of the GOP's isolationist past. "You're not allowed to go to war without a declaration of war," said Rep. Ron Paul, R-Texas. Paul declared flatly that the Constitution was clear and that Romney's talk about consulting attorneys was "baffling." He also maintained that "the thought that the Iranians could pose an imminent attack on the United States is preposterous." When Giuliani shot back that Sept. 11 had been such an attack, Paul interrupted him. "That was no country," snapped Paul. "That was 19 thugs. It has nothing to do with a country."

Sen. John McCain tried to present himself as the voice of reason in the debate, saying, "Of course you want to go to Congress; of course you want to get approval." Last spring, however, when badgered by a belligerent audience member at a South Carolina campaign event about how long the U.S. should tolerate Iran's alleged bad behavior, McCain had been caught on camera singing "Bomb, bomb, bomb/ Bomb, bomb Iran" to the tune of the old Beach Boys hit "Barbara Ann." If any major Iranian political figure had made a similar jest about striking the U.S., it would not have been quickly forgotten in Washington. McCain's ditty, and the relative lack of controversy about it, speak volumes about the aggressive mood in the U.S.

Among the Republican front-runners, debate about Iran occurs in a dark, upside-down fantasy land, where a weak third-world regime with no air force to speak of plots a military strike on the planet's sole superpower. The third-world regime is led by a genocidal commander-in-chief who serves a global conspiracy; to stop him, the president of the superpower might be compelled, after a quick chat with a lawyer and a few bars of a golden oldie, to launch an aggressive war. (And even the part about a conversation with an attorney is seen by some of the candidates as an abdication of manhood.)

Perhaps because of his chest-thumping contest with Giuliani, Romney especially has shown a talent of late for putting the ignorant in fear-mongering. During the Dearborn debate, Romney alleged that Iranian President Mahmoud Ahmadinejad had "spoken about genocide," and said it was important not to "allow that individual to have the control of launching a nuclear weapon." In an ad released after the debate, in a clear attempt to out-Giuliani Giuliani, Romney declaimed, "It's this century's nightmare, jihadism -- violent, radical Islamic fundamentalism." He told the cameras that the fundamentalists' goal is to establish a "caliphate," and wanted to "collapse" countries such as the United States as part of that goal. "We can and will stop Iran," he added, "from acquiring nuclear weapons."

President Ahmadinejad, whose job is more or less ceremonial, is not the commander-in-chief of the Iranian armed forces. He has never advocated "genocide," and his expressed wish that the "occupation regime over Jerusalem" (i.e., the Israeli government) eventually vanish has been mistranslated.

As for the rest, the candidates simply assume that Iran has a nuclear weapons research program, which has not been proven. It certainly does not have a nuclear weapon at present, and the National Intelligence Estimate indicates that if it were trying to get one, it would take until at least 2016 -- and then only if the international environment were conducive to the needed high-tech imports. (Ahmadinejad, by the way, will not be in power in 2016.) Also, someone really needs to let the Republicans know that Iran is Shiite, meaning it abhors Sunni fundamentalists and rejects the caliphate.

Iran has also become an obsession on the Democratic side of the aisle, albeit absent the rampant machismo. In fact, while many of their colleagues in Congress continue to second Republican saber-rattling, most of the Democrats who are running for president seem notably wary of rushing into war with Iran.

Of the four senators among the Democratic candidates, only Hillary Clinton voted for the non-binding Kyl-Lieberman resolution on Sept. 26. The Kyl-Lieberman resolution, which passed 76-to-22, with 29 Democrats voting in favor, says, "the United States should designate Iran's Islamic Revolutionary Guards Corps as a foreign terrorist organization ... and place the Islamic Revolutionary Guards Corps on the list of Specially Designated Global Terrorists." Jim Lobe, among the best journalists covering neoconservatism in Washington, wrote that unnamed "Capitol Hill sources" told him that the resolution was crafted by the American Israel Public Affairs Committee. Investigative reporter Seymour Hersh of the New Yorker, interviewed on "Democracy Now," concurred that the amendment was pushed by the Israel lobby.

It would be unprecedented to declare a military force of a state to be a "terrorist" organization, and illogical, since the formal definition of terrorism is that it is committed by non-state actors. It would also endanger U.S. troops, who might well be designated terrorists by some foreign governments. Speaker of the House Nancy Pelosi said Sunday that she would not allow a similar resolution to be brought up for a vote in the House of Representatives, telling ABC's "This Week," "This has never happened before, that a Congress should determine one piece of someone's military is [a threat]."

Sen. Chris Dodd voted against the resolution on the grounds that it would green-light a Bush administration attack on Iran. Sen. Joe Biden also opposed it, though he argued that it was just a resolution and could not authorize a war. Sen. Barack Obama missed the vote because it was abruptly rescheduled after he had already left on a campaign swing, but when he learned of the rescheduling he issued a statement against the resolution. Obama blasted Clinton's vote for the resolution as a repeat of the mistake she made when she voted in 2002 to authorize the Iraq war. (Clinton muddied the waters somewhat by backing a resolution by Virginia Sen. Jim Webb requiring that Bush seek Congressional authorization before attacking Iran.) Some analysts suggested that Clinton is already thinking past the primaries. They believe she is making her decisions on the assumption that she will face a Republican hawk in the presidential contest of 2008, and therefore has to guard against charges that she is weak on national security. According to this analysis, the other Democratic candidates, trailing her, are still playing to the party faithful, who are to the left of the general public.

In short, Clinton's staffers must have read the Opinion Dynamics poll for Fox Cable News, which shows that 80 percent of the U.S. public believe that Iran's nuclear program is for weapons purposes, and 50 percent believe that the U.S. should take a tougher line with Iran (as against 31 percent who do not). About 29 percent of the sample want Bush to go ahead and attack Iran before leaving office, while a bare majority thought he should leave the problem to the next president. Some 54 percent of respondents believed that if Iranian President Mahmoud Ahmadinejad had been allowed to visit the site of the Sept. 11 attacks, he would have been intent on honoring the hijackers.

Since the International Atomic Energy Agency, which has been carrying out regular inspections of Iran's nuclear facilities, still cannot find good evidence for a weapons program, the overwhelming consensus to this effect in the U.S. is evidence of successful propaganda by the Bush administration and its enablers in the media. That Ahmadinejad, an Iranian Shiite who has repeatedly denounced Sunni fundamentalism and its terrorist activities, should be viewed as an al-Qaida sympathizer by the American public is a testament to how effectively he has been demonized.

Iran has not launched an aggressive war against a neighbor since 1785 and does not have a history of military expansionism. Its population is a third that of the United States and its military is small and weak. Aside from the Republican Party's long history of fear-mongering as a way to get power, throw public money to their corporate clients, and scare Americans into giving up their civil liberties, what is driving this obsession with Tehran?

Candidates may be talking about Iran as an indirect and politically safer way of speaking to voters' anxieties about Iraq. As an issue in itself, Iraq contains many pitfalls. It is a quagmire about which a former commanding general in that country, Rick Sanchez, said last Friday, "There is no question that America is living a nightmare with no end."

The Iraq problem is so intractable that bringing it up with voters is dangerous, since they will then ask about policy prescriptions, and most experts agree that the U.S. has no good options. Iran, in contrast, looms as a vague sort of threat on the horizon and politicians can therefore pull out of their tool kits their favorite instrument -- speaking hypothetically without committing to a particular course of action. The problem, as Chris Dodd and Barack Obama saw so clearly, is that in attempting to change the conversation to Iran, American politicians and their morbidly aggressive constituents may be vastly widening the quagmire, playing Katrina to the Middle East's New Orleans.