What you missed while watching the Red Sox win 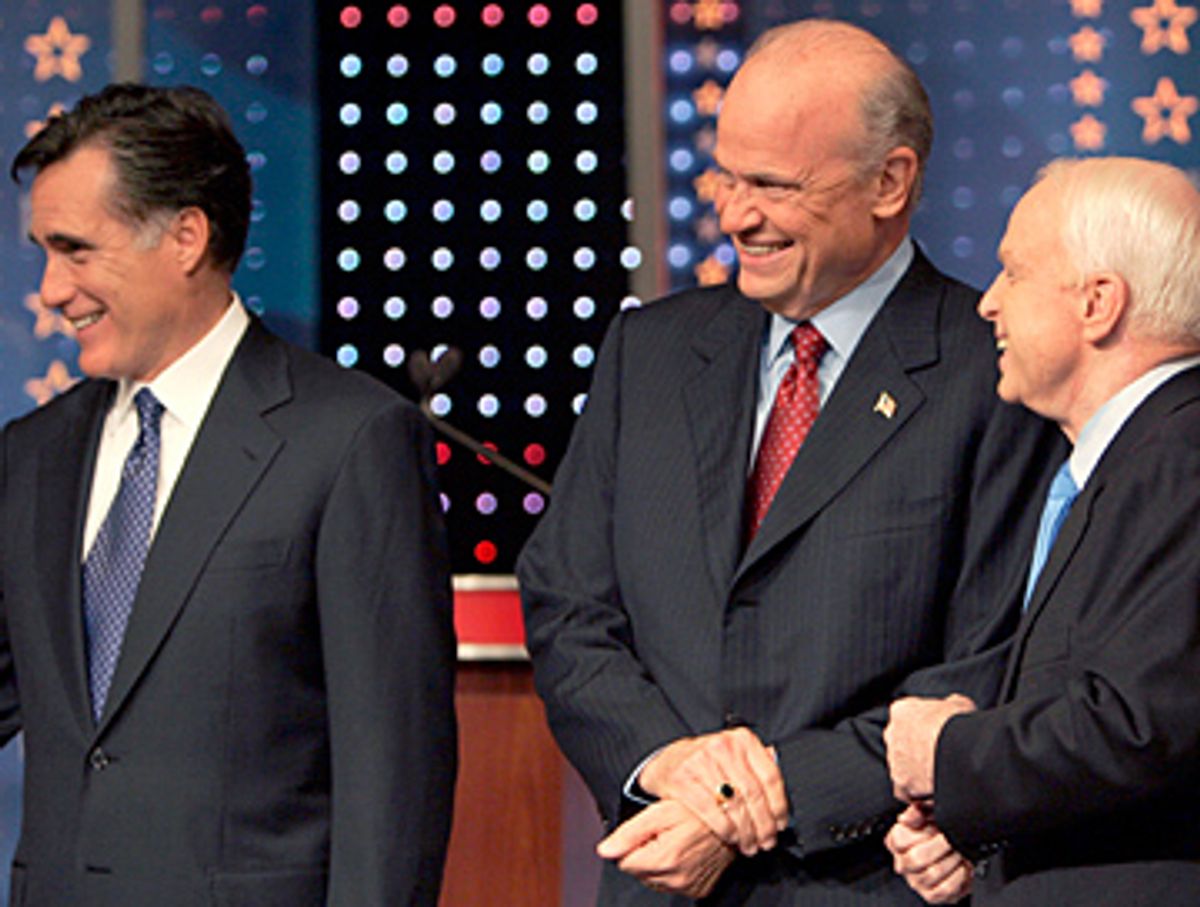 0 minutes. Fox News anchor Brit Hume, his American flag lapel pin in place, opens the latest Republican debate by boasting that it will be "seen and heard" on Fox News Channel, Fox News Radio and FoxNews.com. He does not mention that almost no one will be watching or listening, especially in New Hampshire, because right now the Fox Network is broadcasting Game 7 of the American League Championship Series between the Boston Red Sox and Cleveland Indians. Fox has effectively stolen its own audience from itself.

1 minute. Fox News Sunday host Chris Wallace is not wearing his American flag lapel pin, and therefore cannot be trusted. He is a troublemaker. A bad seed. He wants to start a fight. He tells former New York Mayor Rudy Giuliani that former Tennessee Sen. Fred Thompson thinks he is a softy -- "soft on abortion," "soft on gun control," and a lousy conservative. Giuliani, who is wearing his pin, does not take the bait. He just talks about his accomplishments in New York.

3 minutes. America-hater Wallace tries again. This time he tells former Massachusetts Gov. Mitt Romney that Thompson thinks he ran to the left of Sen. Ted Kennedy, D-Mass., in a 1994 Senate race. Romney has not put enough product in his hair, so a strand hangs down over his forehead, which makes him look younger, like a boy -- a bad boy who is not wearing his lapel pin. Nonetheless, Romney dodges the question and declines to go negative.

4 minutes. Enemy-of-freedom Wallace turns to Thompson, who is wearing his lapel pin. The tall man goes ballistic on Giuliani. "Mayor Giuliani believes in federal funding for abortion. He believes in sanctuary cities. He's for gun control. He supported Mario Cuomo, a liberal Democrat, against a Republican who was running for governor," Thompson says. This calls into confusion the meaning of the lapel pin. Wallace, who is not wearing his pin, and Thompson, who is, are working together to cause trouble. How is this possible? Maybe the lapel pin does not mean what it is supposed to mean. Maybe it means nothing at all.

5 minutes. All hell breaks loose. Giuliani, with pin, finally decides to attack Thompson, for standing with Democrats on tort reform "over and over again." Thompson says Giuliani "went to court, filed suit himself to overturn our abolition of sanctuary cities." Giuliani says Thompson "has never had executive responsibility."

10 minutes. Romney has fixed his hair, and like Samson, suddenly seems more powerful. But he will not counterattack. "Senator McCain is an American hero," Romney says. "And I respect his service."

11 minutes. McCain tries again. "Governor Romney, you've been spending the last year trying to fool people about your record. I don't want you to start fooling them about mine," the American hero says. Again Romney lets his full head of hair speak for itself.

16 minutes. Talk has turned to gay marriage, and Giuliani is boasting about how much he likes the straight kind. "I did 210 weddings when I was mayor of New York City. So I have experience doing this. They were all men and women, I hope." Even Republicans like cross-dressing humor, and the Orlando, Fla., crowd laughs. Giuliani smiles. "You got to give me a little slack here. It was New York City, you know?"

18 minutes. Former Arkansas Gov. Mike Huckabee finally gets a question, and makes the most of it. "I'm kind of glad I wasn't in on the first few minutes because it was all about these guys fighting each other," he says. "I'm not interested in fighting these guys. What I'm interested in is fighting for the American people." The crowd is cheering. Huckabee is not wearing a lapel pin. The lapel pin doesn't mean a damn thing.

26 to 35 minutes. The candidates talk about healthcare. They are all against whatever Hillary Clinton is for. But beyond that there is confusion about what kind of mandates, tax credits, prevention requirements should be included. Texas Rep. Ron Paul says poor people don't have good healthcare because America is spending money "running a world empire." Huckabee tells a joke about old hippie baby boomers, who are about to realize they can get free drugs from Medicare. "Just wait until what that's going to cost," he says. More laughter.

40 minutes. The first commercial break. Over on the Fox Network, it's still the bottom of the first, Manny Ramirez singles to left center, scoring Dustin Pedroia from second. One to nothing, Red Sox.

44 minutes. We're back. The newly departed chairman of the Republican National Committee, Sen. Mel Martinez of Florida, can be seen rushing back to his seat, perhaps from a potty break. Wallace introduces the Hillary Clinton round. He begins by telling Romney that Fox has a poll that shows Hillary Clinton would whoop his ass by 12 points if the election were held today. "Is Hillary Clinton fit to be commander in chief?" he asks. The crowd screams, "No!" in unison.

45 minutes. Romney rides the Hillary hatred. "She hasn't run a corner store. She hasn't run a state. She hasn't run a city. She has never run anything. And the idea that she could learn to be president, you know, as an internship, just doesn't make any sense," he says. Wow. This is a low blow. Romney has just evoked the image of an intern in the Oval Office while discussing Hillary Clinton. He might as well just pull out a blue dress and dribble some salad dressing on the stage.

48 minutes. Wallace says that McCain is running closest to Clinton in the Fox poll, losing by only three points. This gives McCain a chance to go after Clinton. "In case you missed it, a few days ago, Senator Clinton tried to spend $1 million on the Woodstock Concert Museum. Now, my friends, I wasn't there. I'm sure it was a cultural and pharmaceutical event," McCain says, before pausing a beat. "I was tied up at the time," he says. The whole place goes berserk. Most of the candidates onstage applaud former prisoner of war McCain. The entire crowd comes to its feet. Comedy springs from tragedy, and McCain has a deep well to draw from.

55 minutes. Paul finally gets a chance to rant against the war in Iraq. He does it by attacking Clinton for being too much like the Republicans. "Sen. Clinton has nothing new to offer," he says. "She's endorsing the same policy. She said that the troops would be there for another five years, continue to build this embassy that's going to be bigger than the Vatican." This is totally confusing to the Republican audience, which responds with boos.

60 minutes. Back in Boston, in the bottom of the second, shortstop Julio Lugo grounds into a double play, scoring Jason Varitek from third. Two to nothing, Red Sox.

69 minutes. Colorado Rep. Tom Tancredo finally gets a chance to bring up immigration, this time in the context of a discussion of Social Security. It should also be noted that California Rep. Duncan Hunter is standing onstage, and sometimes he says stuff.

70 minutes. Second commercial break. Sox pitcher Daisuke Matsuzaka is up against Casey Blake, who hits it through the middle for the Indians' first hit of the night. Then Blake takes second on a wild pitch. Two out in the top of the third. The debate will be on again soon. It's hard to change the channel back. Really hard. But democracy matters. There is a job to be done. Somebody has got to do it.

73 to 80 minutes. Questions are about Russia and Turkey. McCain said he sees the KGB when he looks into Vladimir Putin's eyes. Hunter says he wants to put missile defense missiles on a boat in the Black Sea. Thompson says the PKK, a Kurdish group battling the Turks near the Iraq border, are terrorists. Both Thompson and Tancredo agree that House Speaker Nancy Pelosi is wrong to allow votes on a bill to condemn the Turkish genocide of Armenians nearly 100 years ago. Paul talks apocalyptic. "The war is spreading, the war is likely to go into Iran, nobody's willing to take anything off the table," he says.

85 minutes. Mike Lowell hits a sacrifice fly, scoring Kevin Youkilis from third. In the bottom of the third, three to nothing, Red Sox.

87 minutes. Thompson is asked if he is lazy. The crowd boos. "It's OK," says Thompson. "Let me answer." Then he rattles off his résumé, starting with his first marriage and child at the age of 17, his time as a lawyer, a U.S. attorney, a Watergate counsel, his two Senate victories, and his work as an advisor to the Bush administration. "If a man can do all that and be lazy, I recommend it to everybody," he says.

90 minutes. It's over. Say what you will about the Fox News Channel, but at least they limit their debates to 90 minutes. It's the top of the fourth at Fenway, three to nothing, but the Indians have a runner in scoring position. It's anybody's game, even though most of America thinks they already know who will win.