May we congratulate you on your divorce

Couples are commemorating shattered vows with the same kind of fanfare accorded their marriage -- complete with announcements, parties and even vacation funds. 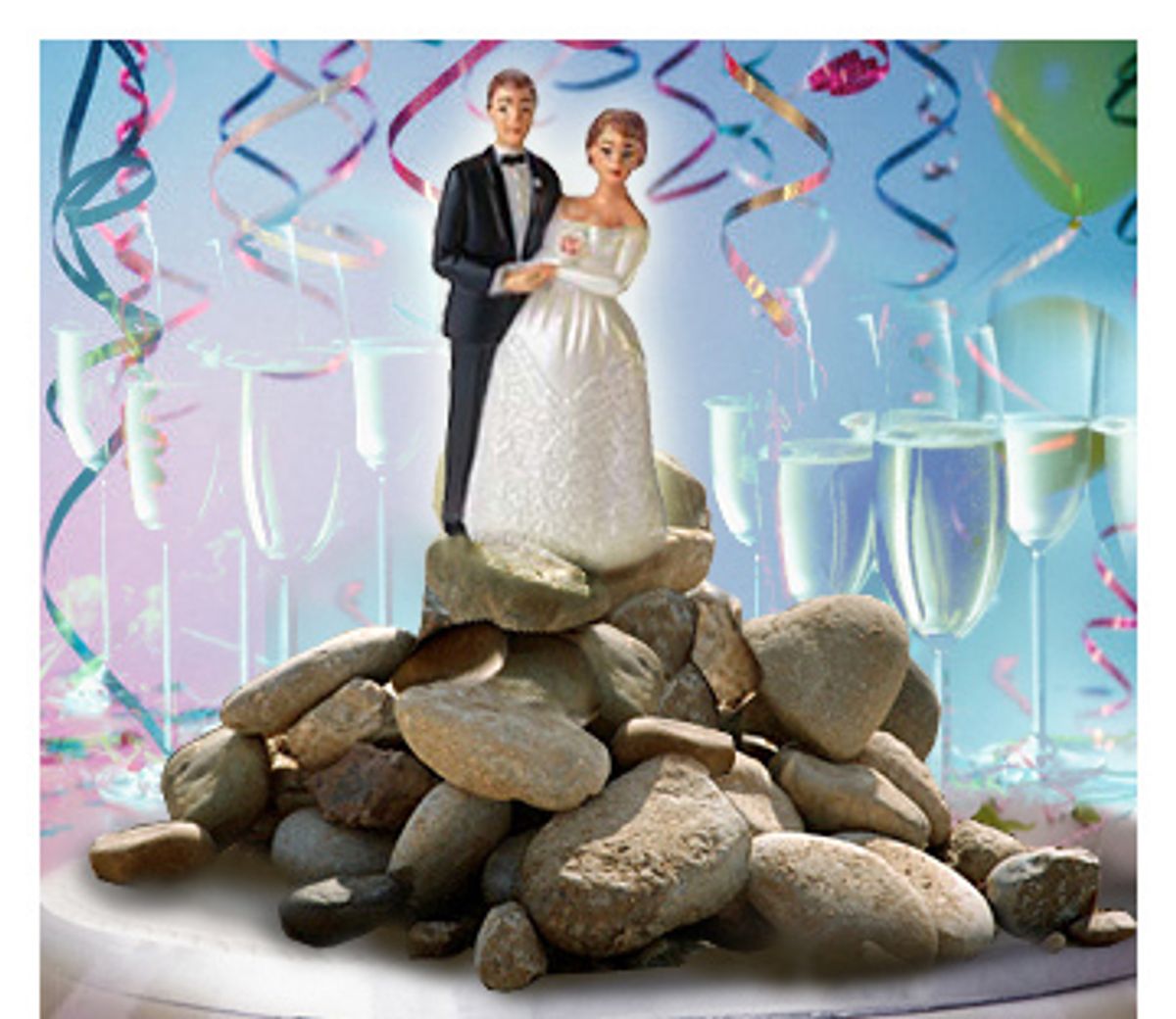 Thirty ceremonies later, the wedding rush has finally slowed to a trickle. Wedding season may traditionally only last from May through October, but my experience says otherwise: "I do's" have been constant since 2003, without so much as a winter break.

I can't help rejoicing that no oversize invitations clog my tiny mail slot. I no longer choose three months in advance between chewy chicken and fishy salmon, design my portion of a "love quilt" or hop in a white stretch Hummer limo with 14 other grown women -- all clad in mandatory purple -- while sipping periwinkle "bachelorette" martinis from veiny, plastic, glow-in-the-dark, disembodied penis straws. These days, I check my in box without fear of blissful wedding Web sites sharing rose petal-filled proposal sagas and Pottery Barn, Tiffany and Target registries.

I thought I was finally safe. I didn't know about divorce season.

Recently, my boyfriend Andrew opened a mass e-mail from his friend George, with the generic subject heading: "Please Read." Expecting a forward about the latest dangerous cold medicine or recalled cat food, Andrew was shocked when confronted instead with a deeply impersonal divorce announcement. Having left his fabulous 30-something wife for a younger woman, George expressed sadness about the relationship's dissolution and (to undisclosed recipients) sincere gratitude for years of camaraderie.

Though the sentiment had intimate -- even life-changing -- implications, the e-mail was deeply disposable. Reading (and rereading) the note from our swivel chairs, Andrew and I unwittingly bore witness -- along with a larger anonymous group -- to this relationship's public demise, just as we had watched our friends seal their bond from a pew at their wedding years before.

Another divorce announcement arrived via mass e-mail soon thereafter. A rambling joint effort by the couple, it read like a separation form letter and waxed so profusely about eternal mutual admiration that I suspected the couple just edited their original wedding vows to cut down on writing time. Still, a special request that we (close personal friends) refrain from writing negative comments on their respective MySpace pages was probably a new addition. In fact, divorce announcements are now regular occurrences on MySpace and Facebook, where people constantly update their status, marital and otherwise.

It made us feel like intruders, as if we were guests at a wedding for anyone other than our dearest friends and family. If these couples didn't feel close enough to share this significant and painful issue over the phone, in person or at least via individual e-mail, why did they need to treat acquaintances to a mass diatribe about how they're still "cheerleading" for each other? As my deeply spiritual friend Tova admitted after a recent breakup, "I prefer to hate it out. In private." I know what she means. All the saccharine sentiments, however well intentioned, make one yearn for a few good ole exclamations of "bastard" and "bitch."

Actually, commemorating divorce with the kind of fanfare usually accorded a wedding, whether by e-mail or more formal snail mail, is now relatively common. Failed marriages may have been shameful 30 years ago, but now they are often celebrated as landmarks and new beginnings. Maybe the celebrity breakups that dominate tabloid rag headlines have made us blasé about public divorces. When Jennifer Aniston and Brad Pitt broke up, for example, trend-obsessed Los Angeles boutique Kitson sold "Team Aniston" and "Team Jolie" shirts, so strangers could express solidarity by sporting cotton tees. (Incidentally, "Team Aniston" sold out 2-to-1.)

T-shirts are generally reserved for more high-profile couples, but regular folks might send one of the various greeting cards that are springing up to mark the occasion. Most of them attempt to assuage potential awkwardness and sadness with humor: A Caddylak Graffix option depicts a pistol-toting cowgirl and reads, "Husbands are like guns ... keep one around for long enough and you're gonna want to shoot it!" An upbeat version from J. Treacy Designs features an elated woman throwing papers in the air, declaring, "It's finally over! I just had to tell everyone! Call to congratulate me at (phone number)." And a male-oriented card from TheDivorceCards.com pictures a guy with his hand to his head, lamenting, "My wife left with my house, my car, my money and my best friend ... and I miss him."

Jill Conner Browne, author of "The Sweet Potato Queens' Wedding Planner/Divorce Guide," strongly recommends the humorous approach. "Sending out divorce announcements is tacky, but it's funny tacky, so it's a good thing. The parts in life that aren't funny are the parts we need to laugh at most," Conner Browne muses. Still, she groans at the impersonality of generic notes: "I want my own dadgum letter. I don't want a mass e-mail about your wedding or divorce."

Browne also sees value in another trend: Divorce parties/showers. "Divorce parties meet some genuine needs. Who needs your loving support more -- your deliriously happy friend who's planning her wedding or your friend who is lower than a worm's belly over her divorce?" she asks. "The best group of friends I ever heard of had a party for their divorced buddy. Each woman invited the most attractive single man she knew to come meet their girlfriend -- and nobody was allowed to dress cute or wear makeup but the honoree! Now that right there is what you call your best friend forever!"

Probably the most notorious divorce party to date was hosted last November at Bellagio's club Light in Las Vegas by Playboy Playmate Shanna Moakler, ex-wife of Blink 182 drummer and reality show "Meet the Barkers" co-star Travis Barker. The whole fete reeked suspiciously of an angry bachelorette party. When the musician heard about his ex's upcoming festivities, he blogged on his MySpace page: "Shanna is having a divorce party in celebration of our failed marriage apparently ... I mean, a party?" Barker's concern was legitimate, as the event's centerpiece was a three-tiered, pretty pink wedding cake with a murderous bride poised at the peak and a bloody groom, lying twisted on the plate below.

Not all Vegas divorce parties are so vengeance-oriented. Andrea Eppolito, director of special events and catering for Sushi Roku and Boa, two hipster restaurants at Caesars Palace, says requests for divorce parties started coming in sporadically about six years ago. In the last 12 to 18 months, demand rose astronomically -- thank you, Shanna?

"I probably plan a divorce party once a month," Eppolito estimates. Having begun her career as a wedding planner, Eppolito has organized weddings, divorce parties and then second weddings for the same clients. Separation events are usually customized weekends on a smaller scale, with between six and 20 people, hosted by siblings or best friends. "After people sign the paperwork, they want to decompress," the planner explains. "Sometimes people want something cool, fun and sexy at Roku, and sometimes they want spa treatments." Slumber parties are a new option with big s'more and cinnamon-dusted donut hole-filled dessert displays, liquor, hot chocolate and classic movies.

Eppolito is adamant that these events should promote catharsis rather than negativity, as at her own post-divorce coming-out party six years ago. She confides, "I had spent enough time being hurt, angry and disappointed. You want to mourn it, but you also want to celebrate what was and what's to come."

Some divorcees embrace announcements and parties as a way to put the word out on their own terms and with their own public spin. Christine Gallagher, the Los Angeles author of "The Divorce Party Planner," agrees that "The tone of the announcement can speak volumes about what happened, so that others don't feel it's an unmentionable subject." Gallagher believes a theme party is key to salving the soul; as a result, she's organized everything from "Survivor"-themed beach parties to barbecues using the ex-husband's golf clubs as spits.

Since divorce parties mirror nuptials, gifts are an inevitable all-American requirement. Just as at weddings, divorce presents must be "new beginning" appropriate. "Often a divorce means half the stuff is taken by the ex. Some people have a divorce registry, so that necessary items like coffee makers, etc., are replaced at the party," Gallagher explains. "A toolbox is often the perfect gift for a woman. Everyone can chip in and buy a tool." Vacation funds are popular too. Searching online yields a multitude of other suggestions such as lingerie (à la bridal showers) and gag gifts like a Boyfriend Pillow that puts its arm around you or a set of Venereal Disease stuffed animals, the former probably not likely to encourage a divorcee to "get back out there."

When Phil and Barbara Penningroth -- who literally wrote the book on divorce rituals, "The Healing Divorce" (2002) -- separated after 25 years, the couple strove to find forgiveness through ritual. Their own personal ceremony included a slide show of old photos, a forgiveness vow and a ring return; they highly recommend discarding the ring as a cathartic experience, whether it's buried, returned or tossed in the river. They also encourage couples or individuals to invite family and friends.

The rise of the divorce celebration comes at a moment when America's "wedding industrial complex" is coming under some scrutiny. Earlier this year, Rebecca Mead's book,"One Perfect Day: The Selling of the American Wedding," documented many of the worst excesses. Between ostentation, one-upmanship and lavish registries, weddings have become more like episodes of MTV's "My Sweet Sixteen" than legitimate rites of passage, more about how the couple wants to be perceived than about an actual relationship.

In fact, high-tailing it to the altar has inspired myriad reality shows like TLC's "A Wedding Story," WE's "Bridezillas," ABC's "The Bachelor" and MTV's "'Til Death Do Us Part: Carmen and Dave" -- and we know how well that turned out for Electra and Navarro. Court TV broadcast its own series called "'Til Death Do Us Part," hosted by John Waters, which chronicled married couples whose relationships ended when one spouse murdered the other one.

Public divorce fanfare is seemingly the final frontier in the overblown wedding game, but these ceremonies and parties at least attempt to promote reflection and garner support during a painful time "Whatever works" is the understandable mantra of divorce veterans.

I vowed never to ride in another stretch limo, but then lo and behold, I actually recently got engaged myself. Now it's my turn to torture friends with global flights for a weekend of terribly cheesy music and obligatory meals (though I draw the line at penis straws). My mother wondered about my "morbid curiosity about divorce," when I'm supposed to be planning my wedding. Getting married these days -- when "happily ever after" is nothing short of a holy grail -- requires a leap of faith, and thorough evaluation, too. They say you should never marry someone you wouldn't want to divorce.

While marks of separation like divorce announcements and parting gifts are generally taboo for a bride-to-be, there's value in experiencing the event with eyes wide open. The ultimate objective is to avoid coming face to face with John Waters on "'Til Death Do Us Part."