Pat Robertson's endorsement could be both a blessing and a curse for Rudy Giuliani. 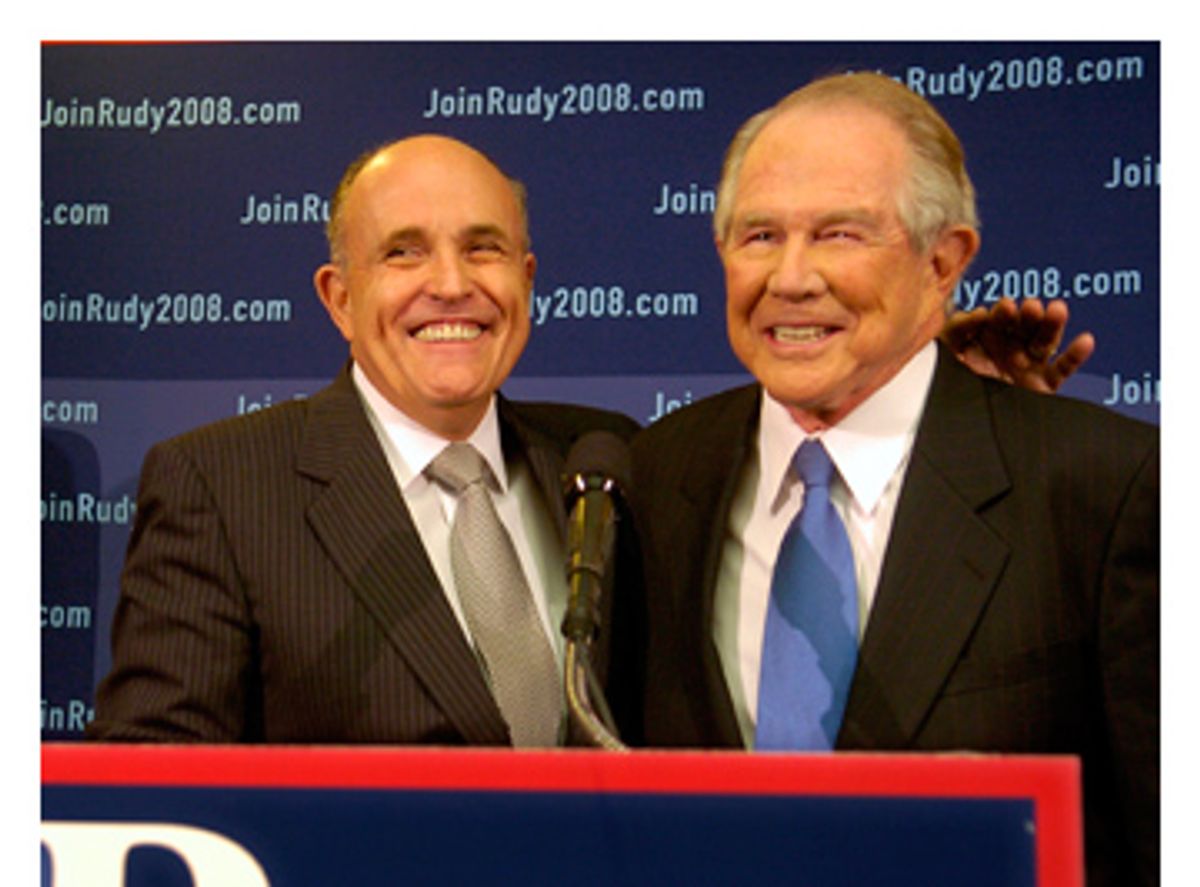 Pat Robertson's endorsement of Rudy Giuliani Wednesday morning may have triggered an earthquake in national political circles, but here in the most socially conservative of the early primary states, there were only faint tremors on the Richter scale. In fact, the early evening local newscasts did not even mention the Pat-and-Rudy odd-coupling, even though Giuliani had swooped into the area for a cameo appearance late afternoon at his state headquarters.

A quick canvass of South Carolina political experts produced the tentative conclusion that Robertson's blessing will register only at the margins, if at all. "The Christian right is always locally autonomous, and they don't take direction from their presumed leaders. I don't think this will signal a mass stampede by the evangelicals to Giuliani," said Danielle Vinson, a political science professor at Furman University.

Even more skeptical was David Woodard, a political scientist at Clemson University, also a Republican political consultant. "Pat Robertson roared into the state in 1988 after he finished second in the Iowa caucuses, and everybody thought that the Christian Coalition would deliver for him," Woodard recalled. "Instead George H.W. Bush thrashed him."

As he sat in his office in Greenville under a Bush-Quayle poster from that 1988 race, Republican strategist Chip Felkel, who is non-aligned in the Jan. 19 GOP primary, grappled with the implications of Robertson's rendezvous with Rudy. "I suppose it's significant that a nationally recognized religious leader has taken that step," he said. "The [Christian] coalition is not what it used be, but it's still important." Felkel regarded the Giuliani endorsement as similar to the anointing of Mitt Romney by Bob Jones III, the chancellor of Bob Jones University in Greenville, in late October. "What it said to a lot of people is that if they like Romney, it's OK to be for him."

Presidential campaign coverage tends to be afflicted with a fatal fascination with endorsements, given these public vows of troth are, like polls and fundraising figures, about the only "objective" news available before anyone votes. Endorsements may shape headlines but they rarely sway voters. It is embarrassing to recall how many otherwise sensible reporters proclaimed the 2004 Democratic nomination fight all but over as soon as Al Gore embraced Howard Dean.

But in limited circumstances -- like the Mitt Romney and Bob Jones III matchup -- endorsements do give voters a permission slip to do what they otherwise want to do. Loyal viewers of Robertson's "700 Club" who militantly oppose abortion and recoil at libertine lifestyles are unlikely to switch to the Catholic thrice-married, publicly cross-dressing, pro-abortion rights Giuliani. But conservatives already strongly attracted to the former New York mayor's toughness and 9/11 allure might put their qualms about abortion aside because of Robertson's imprimatur.

Endorsements also bring with them a comic element, especially when erstwhile foes suddenly proclaim their shared visions. The Washington press conference announcing the Robertson endorsement was carefully constructed to make it all look like an alliance of strict-constructionist legal philosophers. Introducing the televangelist was not the campaign's director of evangelical outreach, or a political figure known for sharing Robertson's literal reading of the Book of Revelation. Instead the task fell to Ted Olson, the former solicitor general in the Bush Justice Department, a leading conservative legal thinker. The message was clear: This melding of minds was about putting more Antonin Scalias on the Supreme Court, not about Giuliani's personal life and beliefs.

Robertson, who is a frail 77-year-old, was at times not the most articulate advocate on behalf of his chosen candidate. Asked about fears of splitting the social conservative movement on a day when presidential dropout Sam Brownback endorsed John McCain, Robertson said, offering a clanging rather than a ringing endorsement, "I just believe that I needed to make a statement -- and I am speaking for myself -- that, in my opinion, as a -- what would be considered a leader of the evangelicals, that Rudy Giuliani is, without question, an acceptable candidate."

As the day wore on, Giuliani became more exuberant about his newfound ally. In a phone interview with O. Kay Henderson of Radio Iowa, Rudy talked about how on a 2003 trip to Israel with Robertson, "We realized we agreed on far many more things than we disagreed on. In fact, our goals for the country were exactly the same. There are a couple of differences on means and how to get there, but there was a wide area of agreement." It remains unclear whether these wide areas of agreement include support for Robertson's inflammatory 2005 claim that activist judges pose a greater threat "than a few bearded terrorists who fly into buildings."

As McCain discovered when his efforts to woo the late Jerry Falwell compromised his maverick reputation among independent voters, Giuliani does run a risk in secular New Hampshire of appearing too nakedly political in his effort to stake out common ground with Robertson. There is also the possibility that fear of a rampaging Rudy could eclipse the horror of Hillary among right-wing religious voters. As Woodard, the Clemson political scientist, put it, "This endorsement might also galvanize the social-issue conservatives to ramp up their efforts to stop him."

Fred Thompson, who was in South Carolina plugging his "100 percent pro-life voting record," was pressed for his reaction to the endorsement by Carl Cameron of Fox News, just minutes after the Robertson news burst from the press corps' BlackBerrys. "I'm surprised," Thompson said, with a flash of honesty. Then he cautiously added, "I guess it's because I'm easily surprised."

In truth, when this campaign began, it would have been impossible to imagine that Rudy Giuliani would ever be part of an onward-Christian-soldiers alliance with Pat Robertson. But then -- and please, please refrain from any impure thoughts -- politics makes strange bedfellows.

With reporting by Mark Benjamin from Washington.