Nicolas Sarkozy's cheery U.S. visit has the press howling that he's Bush's new lap dog -- maybe even if it comes to hitting Iran. 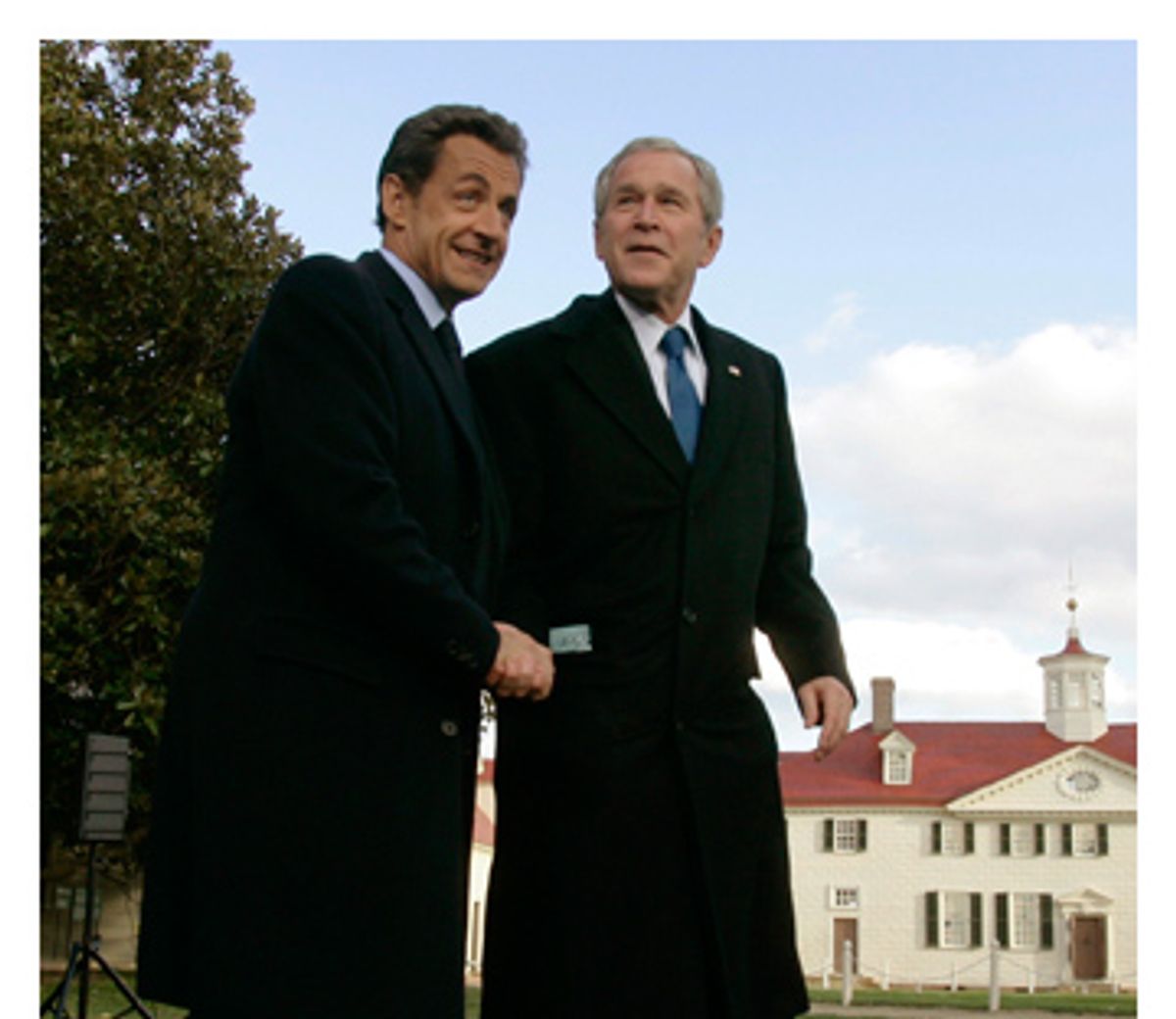 French President Nicolas Sarkozy hardly has the reputation of being an easy-to-deal-with leader. When a CBS reporter unexpectedly asked him about his separation from his wife Cécilia about a week ago, Sarkozy stormed -- furious and red-faced -- out of the studio, only to be heard yelling at his spokesman, whom he called a fool, a child and an idiot for having arranged the interview.

One can only hope the job of presenting this week's press clippings to Sarkozy didn't fall to the same spokesman. Several American newspapers have featured lighthearted caricatures representing Sarkozy as a happily barking poodle on George W. Bush's mighty lap. The French president seems to have taken the place of Tony Blair; cartoonists often used the same imagery to represent the former British prime minister's close friendship with Bush.

Sarkozy must have had an uneasy sense, prior to his departure from Paris, that his 26-hour whirlwind trip to the U.S. capital could provoke just such associations -- and he wanted to avoid them at all costs. "I am a friend of America. Don't torture me for it," he preemptively beseeched his skeptical countrymen. Sarkozy didn't tire of emphasizing his deep friendship with America on the first day of his visit to Washington, whether he was meeting with business leaders, awarding the Légion d'honneur medal to American veterans of WWII, or attending a gala dinner at the White House, where his toast consisted of a solemn promise to win back the hearts of Americans.

On Wednesday, Sarkozy gave a speech before the Congress, an honor rarely granted to foreign leaders. Then he visited Mount Vernon, the historic residence of Founding Father George Washington, together with Bush, evoking the historic roots of the partnership between France and the United States -- including the 250th anniversary of Gen. Lafayette, whose military genius saved the Americans during their War of Independence against the British.

And Sarkozy's hosts are doing all they can to prevent him from thinking too much about the poodle metaphor by scheduling, in addition to the many symbolic public appearances, ample time for conversation between him and President Bush. "This really seems to be the beginning of a new era in the relationship between the two countries," says Laurie Dundon, who until recently worked closely with former Secretary of State Madeleine Albright. "The length of the working meeting between Bush and Sarkozy suggests that." Current Under Secretary of State Nicholas Burns takes a similar view. "The mood has really changed in this respect," he says.

Large parts of the Bush administration seem to have developed a genuine fondness for the energetic French president, who makes no bones about his passion for Elvis tunes, iPods, jogging and American management methods. That may be partly because the Republicans hope to learn from the conservative Sarkozy as to how they might win the next elections. Republican masterminds like Newt Gingrich have been drawing attention for some time to Sarkozy's clever feat, during the French electoral campaign, of successfully distancing himself from his predecessor, Jacques Chirac, despite the fact that they are both members of the same party. The Republican Party's presidential candidates would love nothing more than to use a similar strategy to ensure that their party remains in the White House after the unpopular Bush leaves office.

Even recently, such a harmonious relationship between the U.S. and France would have been unimaginable. No president of the "grande nation" has seen fit to set foot in Washington since 2001. Chirac made the Bush administration's blood boil with his carefully orchestrated campaign against the war in Iraq -- with French Foreign Minister Dominique de Villepin flamboyantly stating France's case against the planned war before the United Nations Security Council. That did not help make the French any more popular across the Atlantic, with conservative tabloids like Rupert Murdoch's New York Post ranting about French "cheese-eating surrender monkeys," and American war hawks successfully renaming French fries "freedom fries" on the U.S. Congress' menu.

Some diplomats say that a tentative rapprochement began about two years ago, on the level of practical cooperation. But it took a change of the French government before that rapprochement could take place symbolically and at the top levels of government. "This is a real opportunity," says Ron Asmus, director of the Brussels headquarters of the German Marshall Fund and a former top official in the U.S. State Department. "Sarkozy is the first French president in decades who truly likes America and isn't seeking to demonize our economic system or our foreign policy for his own political gain."

Sarkozy began satisfying U.S. expectations months ago. He was so supportive of tough measures being implemented against Iran's nuclear program that Republican presidential candidate John McCain spoke enthusiastically of France's new policy on Iran at a campaign rally. "The French!" McCain exclaimed. "Who would have thought?"

Much to the Bush administration's pleasure, Sarkozy also spoke out resolutely against Syrian intervention in Lebanon, called for Kosovo's independence and formulated the goal of improving France's relationship with Israel. And French Foreign Minister Bernard Kouchner's visit to Iraq this summer was noted appreciatively in Washington. Kouchner, who is accompanying Sarkozy on his current visit to Washington, has even hinted that he would not be opposed to a military strike against Iran.

But by sending such signals, Sarkozy is also thinking of his own domestic agenda, says Jeremy Shapiro of the Brookings Institution. "To him, turning toward America is a welcome way of distancing himself from his predecessor Chirac," says Shapiro. But, Shapiro adds, more is at stake: "So far, Sarkozy has also presented himself as a strong advocate of U.S. management methods in his government work. It is important to him domestically that the reservations about U.S. methods disappear."

Of course, not all political differences between Paris and Washington have vanished. Like Chirac, Sarkozy speaks openly about the fact that he feels the U.S. invasion of Iraq was a grave mistake. French opposition to Turkey's possible admission to the European Union continues to clash with Washington's vehement advocacy of future membership for Ankara. And the devaluation of the dollar may suit the current U.S. administration in so far as it accords with its budget goals, but export-oriented European countries such as France and Germany are less pleased. Speaking before business leaders in Washington on Monday, Sarkozy explicitly warned that a strong economy like that of the United States should have a strong currency.

Even as an avowed friend of the United States, Sarkozy must constantly monitor whether the newly cordial relationship leads to any tangible concessions on the part of Washington. Otherwise he risks being unable to counter regular accusations, made most recently on the eve of his trip by French foreign policy experts for the opposition Socialist Party, that he has become Bush's new poodle.

Shapiro points to the German leader by comparison. "Angela Merkel was very adept at retaining her independence in her relationship with the Americans -- by making critical remarks on Guantánamo during her first visit, for example. It remains to be seen whether Sarkozy will be equally adept," he says. But, he adds, a closer look reveals that even Merkel has failed to secure many concrete concessions from the U.S. government.

Washington can afford to continue this asymmetric relationship because both Sarkozy and Merkel -- who will visit President Bush and his wife, Laura, at their Crawford, Texas, ranch for two days at the end of the week -- continue to vie for the status of being Washington's go-to guy for Europe. They will not compete openly for this role, but behind the scenes, America could "very well play them off against each other," Shapiro says. "This administration is very pragmatic. They go where they get the greatest benefit."

It's a strategy that could prove pivotal to Washington's Iran policies. If Sarkozy should agree, during his talks with Bush, to support more aggressive measures against Tehran, that would make it much more difficult for Merkel to reject such demands when she visits. And that could prove to be a serious leadership test for both Sarkozy and Merkel: Will they maintain their rapprochement course even if the Bush administration chooses to intervene militarily against Iran?

This article has been provided by Der Spiegel through a special arrangement with Salon.