Obama goes for the capillaries

Barack Obama delivers a rousing speech in Iowa on Saturday night, all but calling out Hillary Clinton, and then gets weak-kneed on Sunday morning. 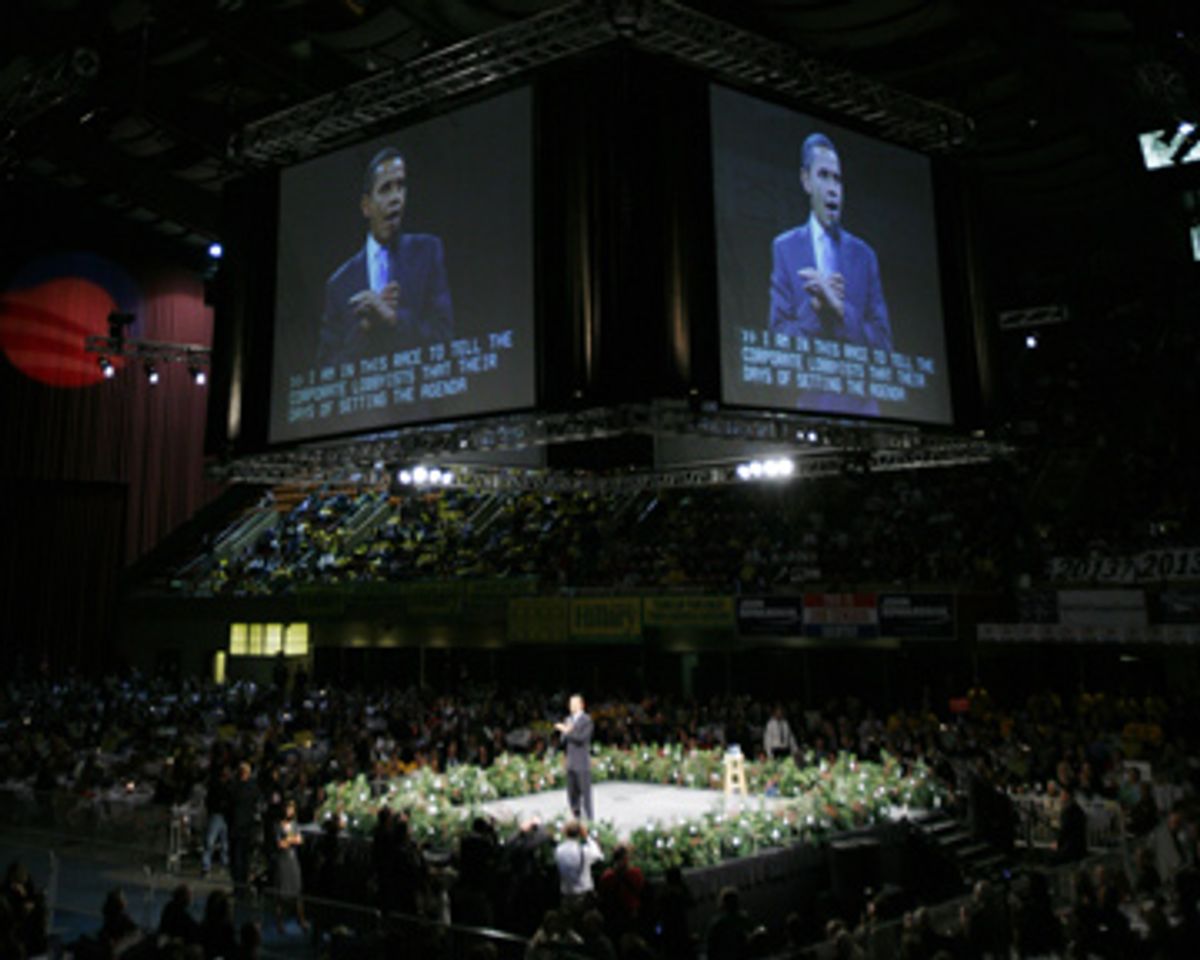 It remains one of the most enduring clichés of presidential politics: that a once-promising candidate suddenly in the home stretch of the campaign finds "his voice." This crisp and emotionally resonant message -- this rationale for running -- has eluded Barack Obama for most of this political season. He was all high hopes and potential, but when it came to performance the results were often humdrum. Voters flocked to him and wanted him to be president, but many did not appear to care whether his Oval Office arrival date was 2009 or 2017.

Then late Saturday night, after the deadlines for most Sunday newspapers had passed, the long-awaited, full-throated Obama materialized when it counted -- before 9,000 raucous <a href="Iowa Democrats at the party's fall fundraising Jefferson Jackson Dinner. After the other presidential candidates had all spoken, Obama came on last to a roar from his youthful followers in the cheap seats in the balcony. But the mixed-raced Illinois senator, whose genealogical charts have yielded some strange fruit, had the entire crowd laughing along with him when he began with a reference to "my cousin Dick Cheney... I've been trying to hide that for a long time. Everyone has black sheep in the family."

Obama's self-assigned task for the evening was to draw sharp contrasts with Hillary Clinton -- to create the bright lines of political demarcation that had eluded him during the most recent Democratic debate in Philadelphia. Using code words that conjure up the timorous side of Clintonism, Obama mocked unnamed Democrats who cling to "triangulating and poll-driven consensus because we're worried about what Mitt [Romney] or Rudy [Giuliani] might say about us." Then, in his sharpest words of the evening, Obama channeled his inner Howard Dean when he declared, "I am sick and tired of Democrats thinking the only way to look tough on national security is talking and acting and voting like George Bush Republicans."

But what a difference eight hours can make. The next morning, Obama appeared for a full-hour interview in another arena of political combat, facing off against Tim Russert on "Meet the Press." The fiery Obama of Saturday night had been replaced on Sunday morning by a replicant, a tepid candidate mostly concerned with avoiding mistakes rather than winning converts. Early in the interview, Russert ran a clip from Saturday night's speech and challenged Obama to identify precisely who was "talking and acting and voting like George Bush Republicans." This was Obama's moment of decision -- either up the ante by calling out Hillary, or fold.

There are many potential uses for the answer that emerged from Obama's mouth. It could, for example, be reprinted as a recipe on the back of a box of pablum. It might sound nice sung in a Tiny Tim falsetto to the tune of "Tiptoe Through the Tulips." But in political terms, Obama's answer was useless, since it would never convince anyone to vote against the Democratic front-runner.

"Look, we know that too many Democrats I believe went along with George Bush when it came to the war in Iraq..." Obama said. "I am concerned about the latest moves the administration has been making with respect to Iran. And when Senator Clinton supported the Kyl-Lieberman amendment that suggests that we structure our forces in Iraq with an eye to blunting the influence of Iran in that country, that is, I think, a wrong message."

Of course, the Democratic nomination fight will not be decided on the basis of a single answer by a sleepy candidate to Tim Russert on a Sunday morning in mid-November. More Iowa Democrats may hear about Obama's boffo Saturday night speech from friends or view clips on YouTube than were up at 8 a.m. Sunday to watch "Meet the Press" on their local NBC affiliates. But Obama's lackluster performance with Russert (no hits, though no obvious errors) illustrates a much larger, though still fixable, problem with his campaign. He has displayed an inconsistent, zigzag style that makes it difficult for him to sustain any mood, any argument, any message in his campaign. Every time Obama takes off the gloves, he immediately feels compelled to lace them up again.

This was one of the most important weeks in the campaign, since Clinton's inability to give a clear answer during the Philadelphia debate -- does she or doesn't she favor driver's licenses for illegal aliens -- has turned her cautious, weigh-every-word style from an asset to an albatross. John Edwards has relentlessly attacked her for "double talk." Before the speeches began Saturday night, a top strategist for one of Clinton's rivals said, "The real question tonight is Hillary. Has she just bloodied her nose or has she burst an artery? It is amazing that the dynamic has changed in a single week from she's inevitable to you can't believe a word that she says."

Speaking just before Obama at the Jefferson Jackson Dinner, Clinton gave a strong speech that ballyhooed a new slogan: "Turn Up the Heat." It is Hillary's effort to put a feminist twist on Harry Truman's famous maxim about a hot kitchen, while reminding voters that she stood up to the "vast right-wing conspiracy." As the candidate put it Saturday night, forecasting the attacks that will come her way before the caucuses, "It's going to get a little hot out there. But that's fine with me. As Harry Truman said, 'If you can't stand the heat, stay out of the kitchen.' I feel really comfortable in the kitchen." (Forgotten, of course, was the brief moment after the debate when the Clinton team suggested that by criticizing her Hillary's rivals were being unfair to a woman).

But the Democratic front-runner was less adept in responding to the persistent criticisms from Edwards and Obama that she is a political weathervane. She acknowledged the brickbats in her speech: "There are some who still say they don't know where I stand. Well, I think you know better than that. I stand where I have stood for 35 years. I stand with you." Since Clinton (like Obama and, on a smaller scale, the other candidates) had packed the galleries, her I-stand-with-you defense won lusty cheers. But it is doubtful that simplistic formulation would work with a more skeptical crowd.

Edwards, who still has as good a shot of winning the opening-gun Iowa caucuses as anyone, gave an effective speech and benefited from his early-evening slot on the political dance card. Even though he opted for a softer tone on Saturday night in a speech that broke little new ground, Edwards stressed his signature argument that the problems facing America cannot be solved by incremental solutions. "We've got to tell the truth," he declared, making a populist pitch. "Corruption has crept its way into our government over a period of decades. And you see it everywhere." The key word here is "decades," since it implies that Bill Clinton's presidency was also in the thrall of special interests.

Edwards -- with his $400 haircut and his brief stint working for a hedge fund -- may appear to some as a flawed messenger, but he intuitively understands that the only way to dethrone an establishment favorite, especially a former first lady named Hillary, is to challenge her directly. Obama, in contrast, still prefers to mask his attacks in "there are some in our party who" generalities -- and, as he demonstrated on "Meet the Press," then rapidly retreat when asked to put a specific face on the "some."

Former Democratic congressman Dave Nagle was one of the few at Saturday night's dinner who is still nonaligned in the presidential wars. But he understands the special risk that front-runners like Clinton endure when they come to the first caucus state. "Be careful about inevitability in Iowa," he said. "You just can't count on it." But if Obama really wants to be the one who knocks Hillary off her pedestal, he should remember that statues rarely topple without a hard push.